Accessibility links
What's At Stake For U.S. Teachers The rules of the game in education are shifting. The same sort of work rule changes that are at the heart of the teachers' strike in Chicago are being debated in school districts and states across the country. 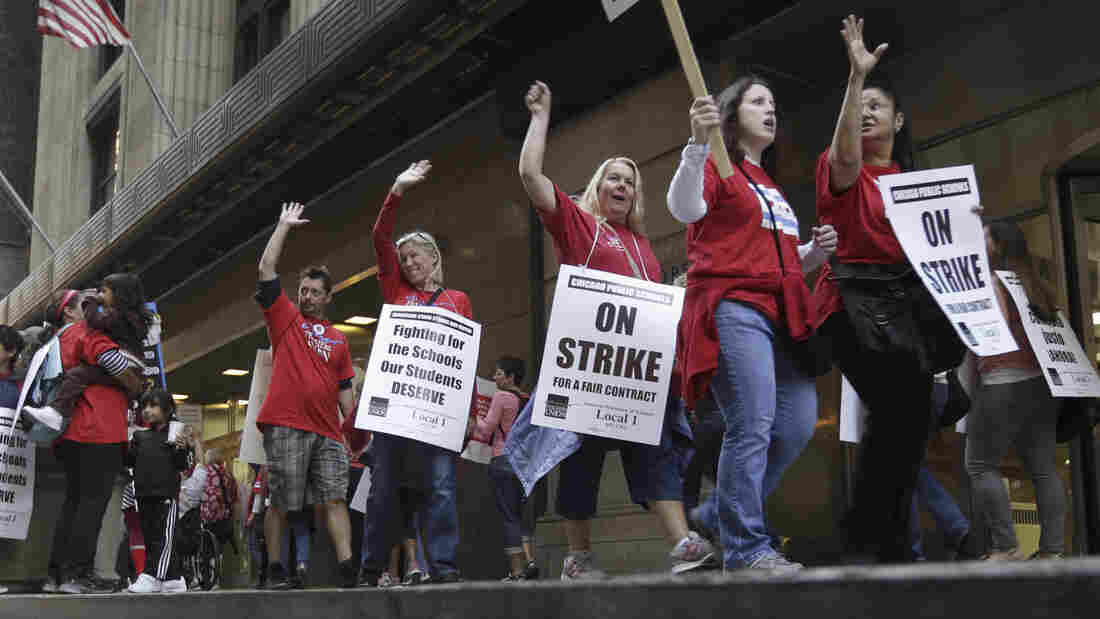 The intractable issues that led to the teachers' strike in Chicago are being argued about in states and school districts across the country.

The past decade has been a time of enormous ferment in education policy, with numerous new ideas and approaches being promoted by everyone from conservative think tanks to the well-heeled Bill & Melinda Gates Foundation to Obama administration officials.

The administration's $4 billion Race to the Top grant program, part of the 2009 stimulus law, encouraged states to overhaul teacher evaluation systems, promote charter schools and make better use of standardized testing, which itself has been a federal priority over the past decade.

All of those ideas have become sticking points in various states and districts. Here's what some of the debate is about:

It's an innocuous-seeming term, but the phrase has turned into fighting words.

Practically everyone in education agrees that the old system of monitoring teacher quality — which largely consisted of having the principal drop by and observe the classroom for an hour or so — turns out to be pretty useless, with virtually all teachers rated as at least "satisfactory."

The problem is that there's not nearly the same kind of agreement about what would work better and be fair to teachers. Bill Gates, the software billionaire whose foundation is funding many education policy experiments, summed up the problem during a July speech to the Education Commission of the States: "Developing a great teacher improvement system is truly difficult, because there are no models."

One big question is whether evaluation systems should be used primarily to sort teachers — and help get bad ones out of the classroom — or as a tool that offers continual feedback and helps teachers to improve their methods.

"What we really believe in is effective evaluation," says Dennis Van Roekel, president of the National Education Association, the nation's largest teachers union. "It would be a system that helps you grow every single day."

Use Of Standardized Tests

The argument in Chicago, as elsewhere, is largely about how much weight to give standardized test scores in evaluating teacher effectiveness.

Annual standardized tests in language and math were mandated for grades three through eight by the 2002 No Child Left Behind Law to chart student progress. Using such tests to evaluate teachers is a priority of the Race to the Top program.

The general public and most politicians have come to believe that looking at whether student scores in reading or math are going up is a fair gauge of whether teachers are doing a good job. Still, teachers argue that the scores can be misleading, not taking into account differences in students' socioeconomic backgrounds, for instance. And the way standardized tests are paced during the school year often means teachers are being judged based on half a year's instruction offered by students' teachers the previous term.

Different tests also can lead to different results — different teachers will measure better on certain types of standardized tests taken by the same groups of students, says Rick Ginsberg, dean of the University of Kansas education school. "These test measures are good at looking at large groups but aren't good at looking at individuals," he says.

Most school districts aren't looking to tests alone. Instead, they're taking into account ratings from parents, peers, principals and students. Chicago's public schools have proposed using test scores for 25 percent of a teacher's evaluation, rising to 40 percent over five years.

"The places that have used value-added measures as part of the evaluation of the performance of teachers all take into account differences among kids, the achievement levels for students entering into the classroom," says Eric Hanushek, a senior fellow at Stanford University's Hoover Institution.

There's no agreement about whether performance pay for teachers would help students. In fact, there's not even agreement about what to call it, with terms such as "merit pay" and "differential pay" also part of the mix.

No other profession determines salaries the way education does, says Winkler of the Fordham Institute. In most districts, two teachers who have the same number of years of experience and the same level of education will be paid exactly the same.

"It doesn't take into account teacher effectiveness, which merit pay has the potential to do, so they're not treated as [interchangeable] widgets," Winkler says.

Teachers unions cast doubt on whether offering performance bonuses to teachers will improve education, citing, for example, a 2010 Vanderbilt University study that found that merit pay alone is not enough to drive up test scores.

The unions were adamantly opposed to merit pay a decade ago, but they're now more open to the idea — so long as new compensation systems are designed in ways they deem fair. One model they like to point to is Baltimore, which adopted a new contract last year.

The contract eliminated the usual "step increases," automatic raises based on education level and seniority. Instead, teachers who meet certain benchmarks will move up the pay scale at a faster rate than their peers.

"The school district and the teachers agree on skills or performance levels that are noteworthy, and if you show these kinds of performances or skills, you move up the ladder," says Rob Weil, an official with the American Federation of Teachers.

Teachers everywhere are nervous about their jobs, mostly because of budget concerns. More than 300,000 teachers have been laid off since 2009, according to the Obama administration.

Some union leaders note that many new teachers are leaving the profession because of uncertainty caused not just by widespread layoffs but by changes in tenure rules in various jurisdictions that have left their career development much less certain.

Teachers unions themselves have been losing members because of the layoffs and are threatened by the rapid growth of charter schools — which are publicly funded but don't operate under union contracts or regular district rules. In Chicago, charters haven't specifically been a strike issue, but Mayor Rahm Emanuel wants to encourage their use. Although charter schools didn't exist 20 years ago, there are now more than 5,000 of them nationwide.

A number of big-city school districts are losing students, owing both to charters and to declining population. With the loss of students comes a loss of teachers. Rehiring laid-off teachers is among the central issues in the Chicago strike and also resonates elsewhere.

Current policy in Chicago is that teachers who are dismissed aren't necessarily hired back. The union wants principals who are hiring to give right of first refusal to laid-off teachers.

That wouldn't allow principals enough flexibility in making their hiring decisions, says Winkler, because it puts a premium on seniority above everything else.

Both Randi Weingarten, who is president of the American Federation of Teachers, and Karen Lewis, the president of the Chicago Teachers Union (which is an AFT affiliate), have complained this week that the school district in Chicago has "disrespected" its teachers.

While not a technical policy term, the concept is one that has become important in education labor disputes.

Teachers complain about the "deprofessionalization" of education and say they are not being treated as responsible professionals. Unions say their members are being scapegoated for everything from poor student performance to ballooning budget and pension problems.

"The last two years have been hard for people who chose education as a profession," says Van Roekel, the NEA president. "There's a lot of blame and finger-pointing, as if the horrible economic crisis we're in is somehow the fault of people who are in the classroom."

But the unions have been too slow to adapt to changing circumstances, in terms of their resistance both to new education policy ideas and to the reality of tightening school budgets, says Hanushek, the Hoover Institution scholar. "Unions have to stop saying they want to keep what they've always had," he says.

The same survey found that 79 percent give their own local schools a grade of A or B, but only 17 percent believe public schools nationwide deserve the same grade.

"When you don't know the schools, you think they're bad," says Ginsberg, the KU dean. "That comes from politicians and the media."