Accessibility links
Florida's 'Stand Your Ground' Law Likely To Remain Residents have been sounding off about the measure to a task force since May, and more hearings will be held before recommendations are made to Florida's Legislature. A task force may suggest a few tweaks to the law, which, despite all the attention, remains popular. 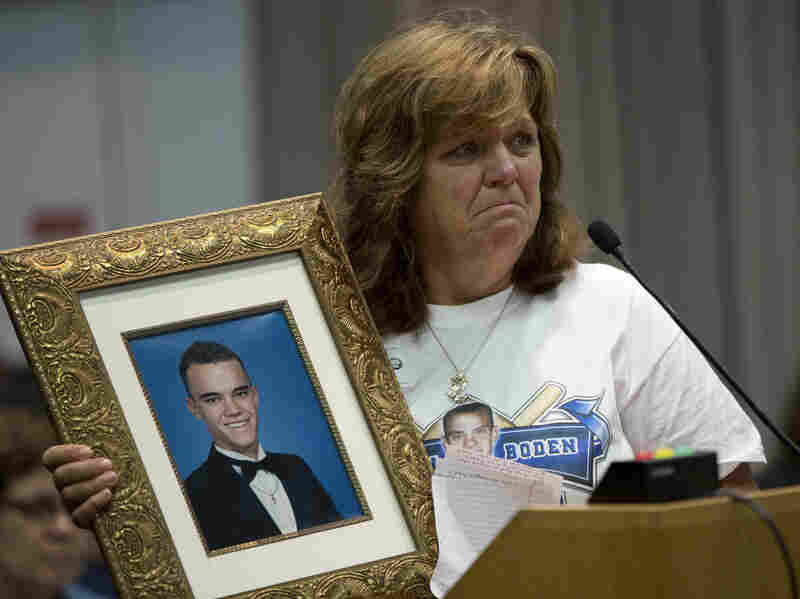 Sandra Boden holds a photo of her son, Jason, during a Task Force on Citizen Safety and Protection hearing. Prosecutors told Boden that Florida's Stand Your Ground law prevented them from filing charges against the person who shot and killed Jason. J Pat Carter/AP hide caption 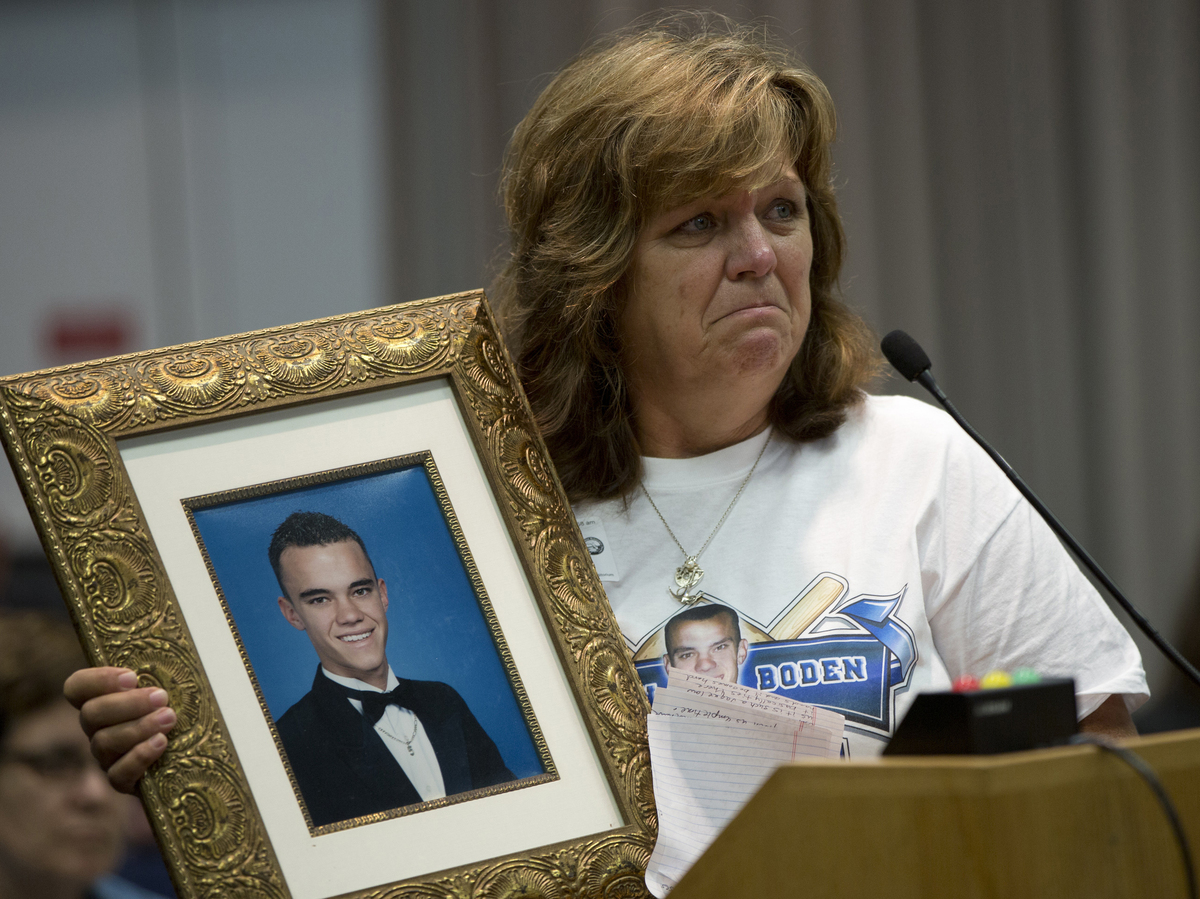 Sandra Boden holds a photo of her son, Jason, during a Task Force on Citizen Safety and Protection hearing. Prosecutors told Boden that Florida's Stand Your Ground law prevented them from filing charges against the person who shot and killed Jason.

A panel in Florida tasked with examining the state's "Stand Your Ground" law is unlikely to suggest that any major changes are needed.

Since it was convened in May, members of the task force have held meetings at locations around the state. At almost every meeting, they've heard impassioned testimony from people like David Boden, whose son, Jason, was killed in a shooting. Prosecutors in West Palm Beach told Boden that Florida's Stand Your Ground law prevented them from filing charges against the shooter.

"How many more have to die? I've always tried to prepare myself for the worst day of my life. When you lose a child, you don't have a clue," Boden said.

Even before the Trayvon Martin shooting cast a spotlight on Florida's Stand Your Ground law, it was controversial. The law strengthened Florida's statutes on self-defense by saying that when faced with death or great bodily harm, individuals could use deadly force and had no duty to retreat. It also says that people defending themselves are immune from arrest, detention and prosecution.

In hearings this week, task force members have divided over that immunity provision. Defense attorneys say it protects residents who defend themselves from having to go through the expense and stress of a jury trial. Prosecutors and judges say it undermines public confidence when a case is dismissed before the facts are heard by a jury.

In a hearing Thursday in Miami, Allie Braswell of the Urban League in central Florida urged the task force to recommend repealing the law or making major changes.

"And all I'm saying is that the law has issues, sir. It needs to be fixed," Braswell told the panel.

Braswell said family members of the person killed in a Stand Your Ground confrontation also suffer and deserve justice. Defense attorney Mark Seiden, one of several supporters of the law on the task force, took issue with that.

"If we have to look at two possible outcomes — one being a citizen, an honest citizen who is wounded, hurt, maimed or raped, and a dead thug, I'll take the dead thug anytime," Seiden said.

This week, University of Florida researchers delivered the preliminary results of a study examining Stand Your Ground. The study found that since 2005, when the law was adopted, the number of justifiable homicides has climbed, violent crime rates have declined and tourism has risen in Florida.

University of Florida law professor Monique Worrell cautioned the task force that the information was preliminary and that more research would be needed to show any correlation with passage of the Stand Your Ground law.

But Republican State Rep. Dennis Baxley, one of the authors of the bill, said he had heard enough.

"Facts are facts. The violent crime did not increase because of this law. I think we did hear ... that tourism did not go down, it went up. Now, I don't think we need to prove cause and effect or correlation," Baxley says.

Members of the task force will hold more hearings before making recommendations to Florida's Legislature. This week, task force members said they may suggest a few of what they describe as tweaks to the law, which, despite all the attention, remains popular. A recent poll showed that nearly two-thirds of Floridians say the law doesn't need to be changed.