Accessibility links
Discouraged In Hunt For A Job, Many Stop Looking The unemployment rate dropped last month, but it's not all good news. Some 844,000 people have given up on finding a job for one reason or another. Some have decided to go back to school to train for a new career, but others have simply become too dejected to keep trying. 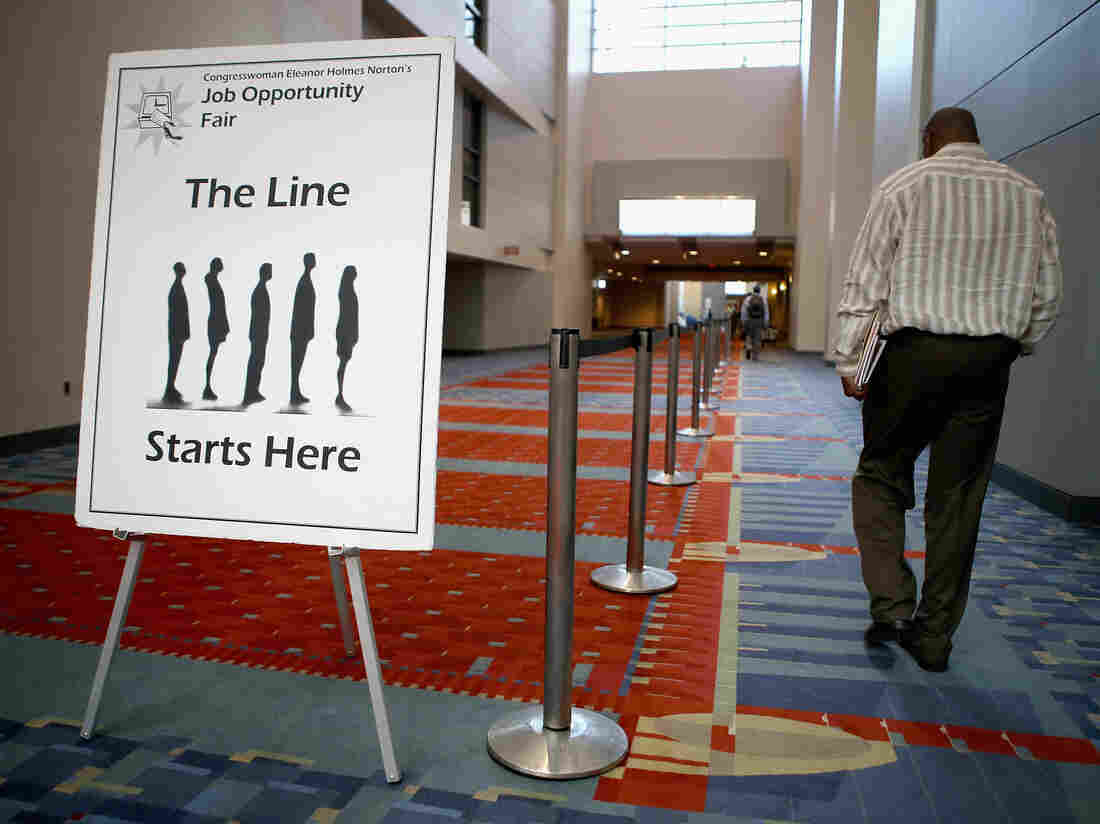 A job fair was held at the The Walter E. Washington Convention Center in Washington, D.C., last month. The U.S. unemployment rate declined in August in part because the number of "discouraged workers" climbed. Chip Somodevilla/Getty Images hide caption A job fair was held at the The Walter E. Washington Convention Center in Washington, D.C., last month. The U.S. unemployment rate declined in August in part because the number of "discouraged workers" climbed.

The reasons people drop out of the workforce are myriad. People go back to school. Others have health issues or family priorities that keep them from looking for work. But some stop looking because they are discouraged.

'Discouraged' is not just a state of mind. It's an official term the Labor Department uses to describe the 844,000 people who last month had given up on trying to find a job because they didn't think there was anything out there for them. So while the unemployment rate edged down this month, there are also more people who have quit sending out resumes, put their best suits back in the closet and stopped looking for work altogether.

Retirement And Its Malcontents

Both Geoff Dutton and his wife, a neuroscientist, have Ph.D.'s. But for years now, neither has found work. Dutton spent years writing software manuals. At 68, he says he can't afford to retire, yet finding a job also feels out of reach.

"My skills were beginning to slip away," Dutton says. "I wasn't up on the new version of everything anymore. Software was turning to the cloud and the Web. The companies that were in that area kept looking for people who had been in that area, and that wasn't me."

Discouraged workers like Dutton aren't the only ones not in the job market anymore, but there's little conclusive information about who these people are, or what they're doing instead.

"It really looks like people are limping across the finish line to retirement," says Courtney Coile, an economist at Wellesley College who studies older workers. Geoff Dutton, an unemployed software developer, has given up on finding a job. He says the market has shifted, and he could not keep up. "I wasn't up on the new version of everything anymore," he says. Courtesy of Geoff Dutton hide caption

For some, dropping out of the labor force is a good sign: Their stock portfolios have recovered, and they can now retire comfortably.

But Coile says a very small percentage of labor force dropouts can claim to be so lucky. The numbers suggest less educated, long-term-unemployed people are turning elsewhere. The number of people on disability insurance has increased more than 20 percent in the past four years.

"It looks like, for some people, the disability insurance programs function as an unemployment insurance of last resort," Coile says.

School: Not Always The Best Years Of Your Life

School is another force pulling workers away from their job searching, but going back to school isn't exactly an attractive option for workers in their 50s. Nonetheless, school enrollment is increasing because of people like Lara Jones, who opted to retrain after losing her job as a contractor for Microsoft. For two years, employers told her she was underqualified for programming jobs but overqualified for supermarket work.

At 44 years of age, Jones secured financial aid and enrolled in community college. Next year, she hopes to transfer to the University of Washington and become a software engineer, a skill she knows is in demand. But, she admits, it is odd being old enough to be your classmate's mother.

"I did an internship over the summer, and it's just really weird to be 44 and be an intern," Jones says. "It's just sort of uncomfortable. It's really weird when your teachers are roughly the same age that you are."

For Carol Bellows, the trade-off of going back to school in her 40s did not pay off.

"I regret going to school. I regret being in that debt. I made more money as a ballet dancer than as a landscape architect," Bellows says.

Now 57, Bellows lives in Tigart, Ore. Her degree did get her a good job, but it lasted only a year.

"I got a bonus check, at Christmas," Bellows says, laughing. "All those things that I'd been hearing about for years with real jobs. And I had health insurance, and it was just truly amazing."

Since 2008, her only job has been a temporary gig with the census. Recently, she gave up looking. She says it simply made sense. Her job search took a lot of time, which meant household chores fell to her husband.

"He's actually asked me to drop the job search, and take care of things, so the rest of our life doesn't fall apart," Bellows says.

Now, Bellows says making money is not the only thing she misses.

"You can't participate in society," she says, voice full of emotion. "You can't go to the store and buy something because you can't afford to. You can't go to a firm and have a Christmas party."

Bellows says she still hopes to work again someday, but that sometimes it feels like it would be easier to win the lottery.