Accessibility links
New School Year Brings Tough Lessons In Spain Budget cuts have hit public education hard — with larger class sizes, pay cuts for teachers, and increased fees for books and school lunches. In some cities, there's a fee just to eat a bag lunch in the school cafeteria. All told, funding for schools in Spain is slated to be reduced some 20 percent by 2015. 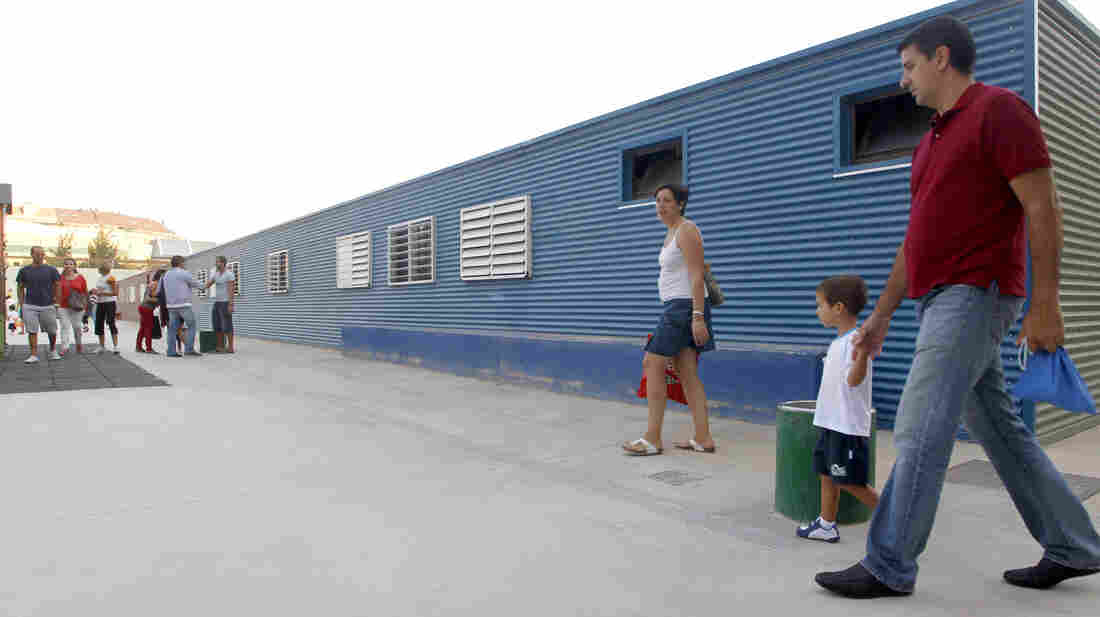 Parents take their children to School No. 103 on the first day of the new school year in Valencia, Spain, on Sept. 7. Spanish students, parents and teachers are feeling the pinch of the ongoing European debt crisis. Heino Kalis/Reuters/Landov hide caption 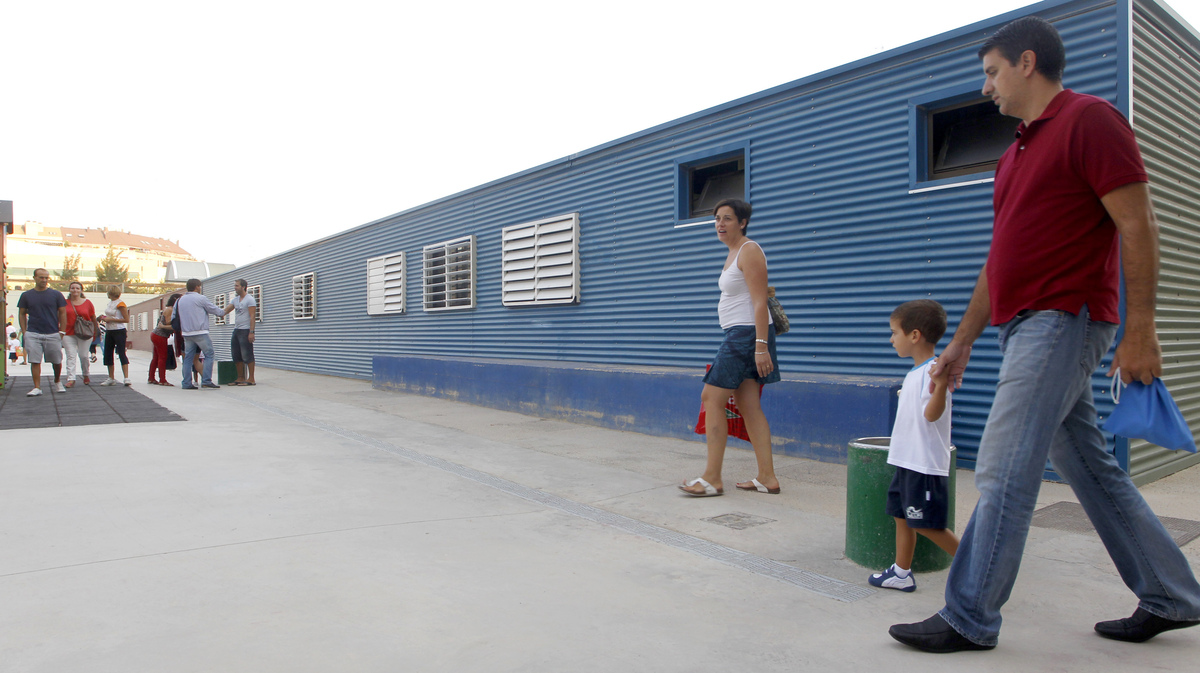 Parents take their children to School No. 103 on the first day of the new school year in Valencia, Spain, on Sept. 7. Spanish students, parents and teachers are feeling the pinch of the ongoing European debt crisis.

Spain is slashing spending to try to avoid a European bailout, and one of the biggest victims of budget cuts has been public education. Schools across Spain reopened this week with bigger classes, fewer teachers and increased fees for things like school lunch and books — placing a heavy burden on many families.

Conchi Redondo blows kisses at her three daughters after dropping them off on the first day of school in Madrid, the Spanish capital. She smiles and waves at the girls, but privately, she's worried.

"It'll be different for them this year, for sure. They've cut the number of teachers and increased the number of kids in each class," Redondo says. "When I was young, Spain was a much poorer country, and I remember we had 40 kids in a class. And now I fear we're returning to that, because of this economy." 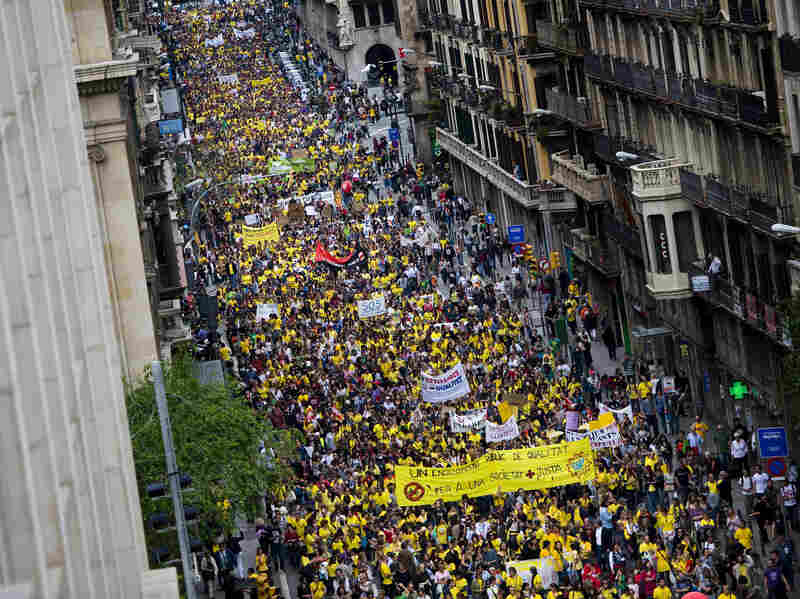 Thousands of teachers and students demonstrate during a protest against education cuts on May 22 in Barcelona, Spain. Teachers are planning another strike for later in September. David Ramos/Getty Images hide caption 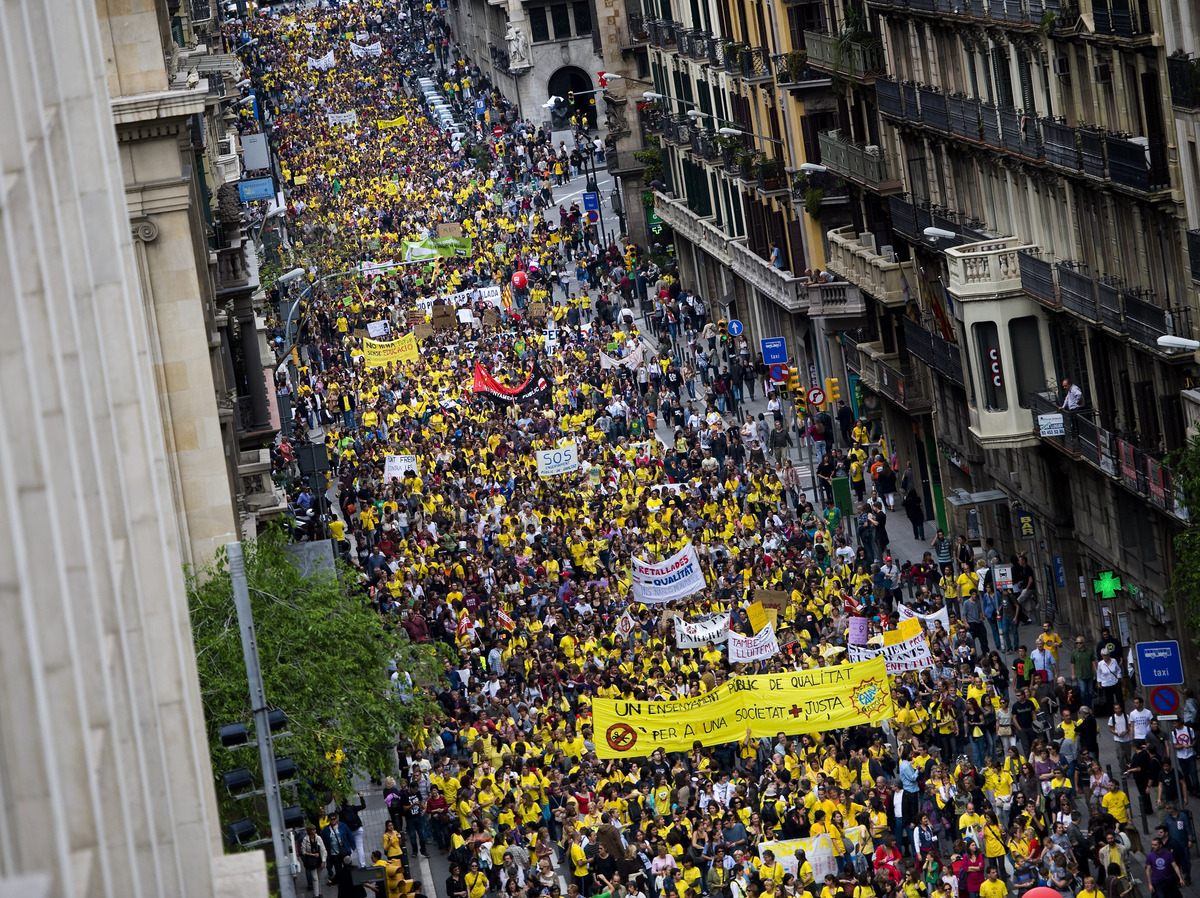 Thousands of teachers and students demonstrate during a protest against education cuts on May 22 in Barcelona, Spain. Teachers are planning another strike for later in September.

During the past few months, Spain has undergone the biggest cuts to public education in the country's democratic history. All told, funding for schools will be cut 20 percent by 2015. For the first time in 14 years, the number of teachers is down through layoffs and attrition, even as student enrollment rises.

A 'Tragedy' For Struggling Families

With three kids in the school system, Redondo used to qualify for a discount on school lunch — but that subsidy has been cut this year.

That's a total of about $480 a month for three kids' school lunches. With one-quarter of Spanish adults unemployed, a growing number of families simply can't afford that.

Redondo's daughters could bring bag lunches to school. But under a new policy, they'll have to pay a fee to eat in the cafeteria — even if they've brought food from home.

Pablo Aznar, an elementary school teacher in Madrid, has had to break the news of higher fees to his students' parents, many of whom have lost their jobs in the past year. "It's like a ball in my throat," Aznar says. "It's a tragedy, because you see the drama in the families."

A special-ed teacher used to come to Aznar's class to help three of his students, who have learning disabilities. But that position was eliminated this year, so the kids will have to go without extra help.

"We try to do our best, but there will be a point where, if we don't have more resources, our job is going to be difficult," Aznar says. "Can you imagine spending one year, every day, from 9 to 6, with 30 kids? That's what's happening."

A gym teacher Aznar knows has been reassigned to teach social studies. And a French teacher is teaching physics. All of them have lost 7 percent of their salaries this year after a 5 percent pay cut last year.

Teachers are planning a strike for later this month. Aznar blames political elites who he says don't understand the impact of budget cuts on middle-class families.

"When you're playing golf and paying like 200 euros for a cup of wine in a restaurant, you are not thinking that a family cannot pay 35 euros for pencils," he says. "It's like they are apart from reality."

Economist Javier Diaz-Gimenez, at IESE Business School, says it's been easier for Spain's ruling conservatives to cut spending on things like health and education, rather than raise corporate taxes — both out of cronyism, but also out of fear that the jobless rate, already Europe's highest, will rise even more.

"It's the politicians. You know, the political organizations need all these corporations, all these enterprises, to employ their people," he says. "So then you start doing the across-the-board things, which hit everybody, because you are not willing to hit the surplus stuff."

Outside a middle school in downtown Madrid, 13-year-old Alvaro Laje and his friends returned from summer vacation to find a parking garage being built on school property.

"It's the yard where we used to play soccer and basketball," he says. "And now they want to make extra money by charging for parking there. So now we'll have to stay inside, during our 30-minute recess. This is how the crisis hurts our quality of life."