Accessibility links
Antietam: A Savage Day In American History The Battle of Antietam was the bloodiest single day in American history, and the partial victory by Union troops led Abraham Lincoln to issue the Emancipation Proclamation. Monday marks the 150th anniversary of the Civil War battle that left 23,000 men killed or wounded on both sides. 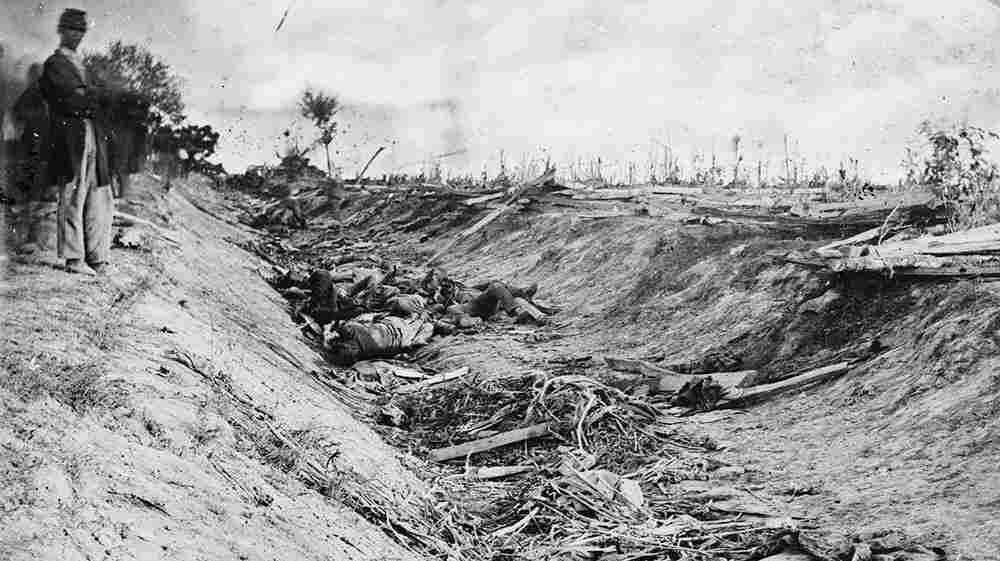 Between two farm fields in Sharpsburg, Md., there was a sunken road, which Confederates used as a rifle pit until they were overrun by federal troops. The road has since been known as "Bloody Lane." Library of Congress hide caption

On this morning 150 years ago, Union and Confederate troops clashed at the crossroads town of Sharpsburg, Md. The Battle of Antietam remains the bloodiest single day in American history.

The battle left 23,000 men killed or wounded in the fields, woods and dirt roads, and it changed the course of the Civil War.

It is called simply the Cornfield, and it was here, in the first light of dawn that Union troops — more than 1,000 — crept toward the Confederate lines. The stalks were at head level and shielded their movements.

Interactive: Antietam Then And Now

Cannon fire opened the battle with puffs of white smoke rising from the tree line, at the precise spot where men re-enacting the battle are firing artillery today.

Just 200 yards in front of the Union forces, Confederate troops from Georgia were flat on their stomachs. They leveled their guns and waited, and when the Union troops broke out of the corn, the Georgians all rose up and fired.

"The smoke, the noise, the artillery is crashing in from all directions," says Keith Snyder, a park ranger at Antietam. "It's just a concentrated terror."

It was complete chaos in and around the cornfield, Snyder says, with people screaming and bodies everywhere. In that first phase of the battle, 10,000 soldiers were killed and wounded.

One of the men who survived the cornfield was Cpl. Lewis Reed of the 12th Massachusetts Regiment. He wrote about that day in a letter years later. He remembered all the men around him screaming for help.

"I found myself on the ground with a strange feeling covering my body ... My shirt and blouse filled with blood and I supposed it was my last day on earth. I had the usual feelings of home and friends and thousands of thoughts ran through my mind at once."

Reed managed to stagger to the cover of nearby woods. He would live to the age of 83. As for his fellow soldiers, 2 of every 3 men in his unit would be dead or wounded by nightfall.

There was nothing special about these fields, or even this town. It had no strategic value. Gen. Robert E. Lee's plan was to push his troops north, perhaps to Pennsylvania, fight a decisive battle, and pressure Northern politicians to sue for peace. Union troops marched from Washington and intercepted Lee.

"The thing about Antietam is it's a very personal battle," Snyder says. "The vast majority of combat here is done at very close range — 100 yards and closer. It's savage and personal. So when you pop out, the enemy is right there."

By late morning, the fight in the cornfield was a stalemate. The Union shifted its attack, and actually turned south and headed toward what was called the Sunken Road.

The Sunken Road was an old country farm lane worn down by years of wagon traffic and erosion. A few hundred yards long and about five feet or so below ground level, it was a ready-made fort for the Southerners. The Confederates — more than 2,000 — were hunkered down, waiting for the Union troops.

The Confederates peered over the top and watched the Northern troops coming across an open field. As the Union soldiers came into view, the Southerners rose up and fired, taking out nearly every soldier in the front rank.

One Union general saw his troops disappear into the Sunken Road, and was heard to say, "God save my poor boys."

But after terrible losses, the Union troops were able to encircle the Confederates, and the Sunken Road became a death trap for the men inside. Men like Sgt. James Shinn of the 4th North Carolina Regiment. He watched hundreds of his fellow soldiers flee to the rear, and later scratched this entry in his diary.

"The Minie balls, shot and shell rained upon us from every direction except the rear. Many men took this chance to leave the field entirely. Many officers were killed and wounded, and I am sorry and ashamed to say, left the field unhurt."

Almost 2,000 Confederate dead and wounded have piled up on this road, says park ranger Keith Snyder. The Sunken Road would forever be known as Bloody Lane, and it was a turning point in the battle.

"Once this thing collapses, the center of Lee's entire Army has been broken wide open," he says. "It is absolute desperation."

The battle shifted to the third and final phase, next to the waters of Antietam Creek.

Nearby, a stone bridge crosses the creek, and on the other side, there's a steep bluff, 100 feet straight up. Confederate soldiers were dug in, and they had a perfect shot at any advancing troops below.

Snyder describes it as a fortress for the Confederates.

"The Union 9th Corps had to attack a castle," he says. "It's almost impossible to take this position."

The plan was to hit the Confederates from two sides. Some would cross the river downstream, while other federal troops would storm straight across the bridge. The bridge was a crucial crossing.

It took three Union assaults — and nearly three hours — to take the bridge. The final assault was led by Brig. Gen. Edward Ferrero, who led veteran soldiers from New York and Pennsylvania.

Ferraro had taken his men's whiskey ration because they got in a little trouble, so one of the soldiers said, "Give us our whiskey and we'll take the bridge."

They did take the bridge, and later got a keg of whiskey. Thousands of Union troops climbed the bluff, and then the real fight began against the main Confederate force.

Gen. Lee's reinforcements saved his forces, and the Union troops were pushed back to the bridge. But at the end of all the combat, with 23,000 casualties and 12 hours of fighting, Snyder says everyone was just about where they were when they started.

"The lines shifted [about] a hundred yards," he says.

It was basically a stalemate.

Late the next day, Lee slipped his army across the Potomac. The Union commander, Gen. George McClellan, failed to pursue Lee. He was soon fired by President Lincoln.

The partial victory at Antietam, however, gave Lincoln what he needed to issue the Emancipation Proclamation that would free the slaves in the Confederate states the following January.

After Antietam, the war would no longer be just about preserving the Union.