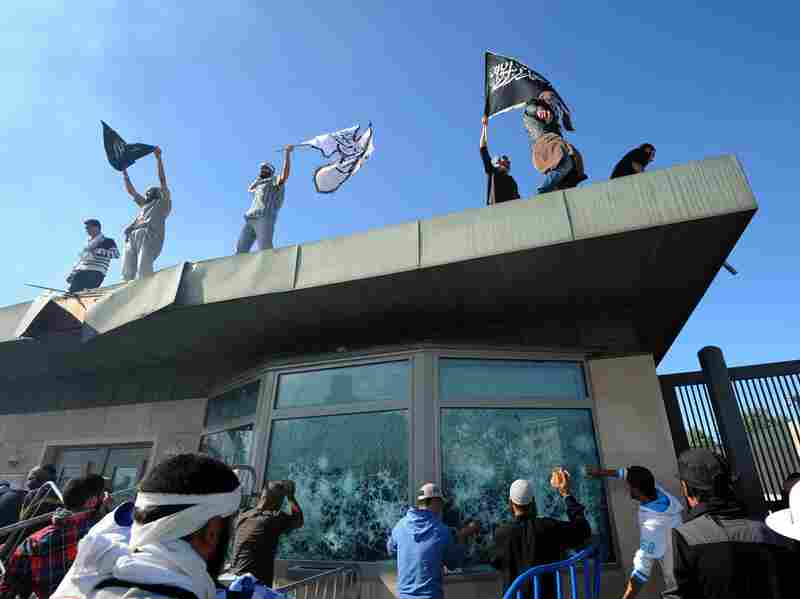 Tunisian protesters break the windows as they hold Islamic flags above the gate of US embassy in Tunis during a protest against a film mocking Islam on September 14, 2012. Fethi Belaid/Getty Images hide caption 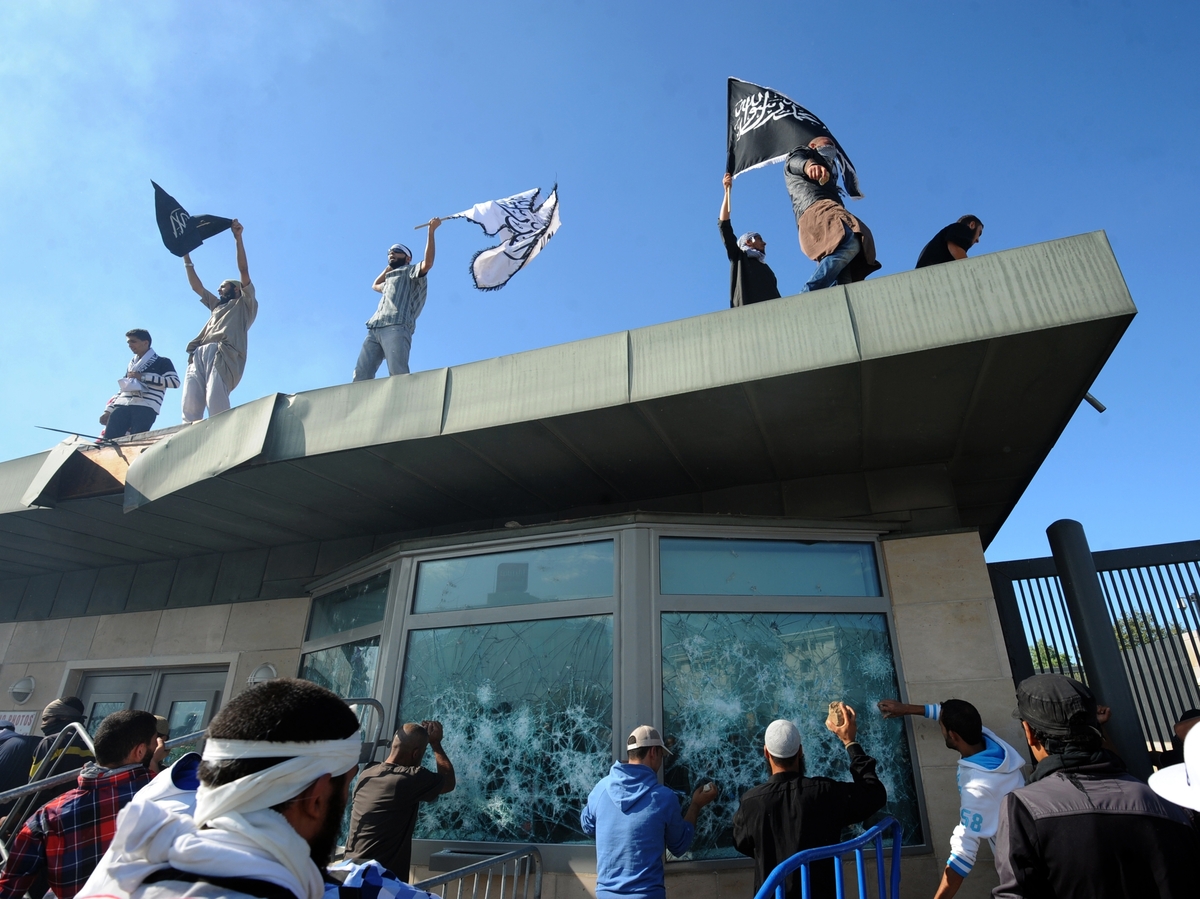 Tunisian protesters break the windows as they hold Islamic flags above the gate of US embassy in Tunis during a protest against a film mocking Islam on September 14, 2012.

When U.S. embassies are under attack around the world, it may seem like an odd time to talk about architecture. But this week's events have highlighted the degree to which U.S. embassies are America's foremost symbolic representatives abroad, and the way the United States presents itself in foreign capitals includes the design of the embassy buildings themselves. Over the last three decades, the design of U.S. embassies has been a balancing act between the need to protect diplomats and staff and the desire to project a positive image of the United States: welcoming buildings that showcase transparency and openness versus imposing and intimidating fortresses. But attacks on U.S. facilities, especially in the post-9/11 era, have tended to tilt the conversation toward the latter, and it remains to be seen whether this week's attacks in Libya, Egypt, Yemen, and elsewhere will have a similar effect.

"It's really a tradeoff that a lot of diplomats will accept, accepting more risk to make it easier to do their jobs," says Jane Loeffler, an architectural historian and author of The Architecture of Diplomacy, a history of U.S. embassy design. "But we're not always willing to make that tradeoff on their behalf."

The State Department didn't put much thought into embassy design for most of its early history; it usually simply bought existing buildings in foreign capitals. In 1926, the Foreign Service Buildings Office — later renamed the Overseas Buildings Office (OBO) — was formed to oversee the construction of U.S. embassies. According to architecture critic Martin Filler, "the results were hardly distinguished and ran to Beaux-Arts Classical or Colonial Revival clichés."

In 1954, the OBO instituted a new embassy design program that embraced the emerging architectural modernist movement in order to give its facilities what Loeffler calls "a distinguishable American flavor." The legacy of that era can be seen today in buildings like the Athens embassy built in 1959 by famed Bauhaus architect Walter Gropius and the New Delhi embassy built the same year by Edward Durell Stone, best known for Washington, D.C.'s Kennedy Center. These facilities may look a bit run-down today, but at the time, they were considered architectural milestones and an emblem of American swagger at the height of the Cold War.

This age of relative innocence in embassy design ended in 1983 with the suicide bombing that killed 63 people at the U.S. Embassy in Beirut. At the time, it was the deadliest attack ever against a U.S. mission overseas and, following closely on the heels of the 1979 embassy siege in Tehran, underscored the dangers facing U.S. diplomats in lightly protected overseas facilities.

Following the bombing, the State Department formed a panel on diplomatic security led by retired admiral and former National Security Agency director Bobby Ray Inman. The 1985 Inman Report, as it came to be known, led to the creation of the department's Bureau of Diplomatic Security and laid out a new set of guidelines for embassy construction. According to the new standards, embassies were required to be built behind a 9-foot security wall, the building itself set back from the street by at least 100 feet and with a maximum window-to-wall ratio of 15 percent. It also recommended sites of 15 acres or more located far from city centers. The report suggested substantial renovations or complete replacements of 126 diplomatic posts, but due to a lack of funding from Congress — only about $880 million was allocated of the estimated $3.5 billion needed — only 15 embassies were ever upgraded to the new standards over the next decade.

In 1998, simultaneous bombings hit the U.S. embassies in Kenya and Tanzania, killing 223 people. The attacks alerted Americans to the threat posed by Osama bin Laden and his al Qaeda network, and they were another bloody wake-up call on embassy security. Neither embassy met the Inman standards — the Dar es Salaam building was only 25 feet from the street, for instance—and a subsequent investigation found that 85 percent of U.S. embassies still weren't up to code. "After 1998, things really did change, and the State Department, under a lot of criticism and with a lot of money coming in from Congress, reorganized its building program," Loeffler says.

The 9/11 attacks led to a complete swing toward security; in 2002, the OBO adopted new guidelines known as "Standard Embassy Design" (SED) which aimed to create a reusable template for U.S. embassy construction around the world. The blueprint — including high fences and a 100-foot setback — is available in small, medium, and large versions and designed to go from empty lot to fully operational in less than three years. It also requires that all U.S. offices be located in the same fortified compound. "The model was a three-part structure with a semi-public part for visitors and the public, an atrium for events and exhibits, and a more secure part," says Loeffler. (See the embassies in Mali, Haiti, and Belize for examples of the form.)

Aesthetics are clearly not a priority in the post-9/11 era; in fact, the State Department's architectural advisory committee was eliminated in 2004. "There was criticism from a lot of places," remembers Loeffler. "Diplomats felt they couldn't do their jobs if they were totally cut off. The buildings didn't seem to be complementing their locations and weren't exactly exporting the best of what America had to offer."

The apotheosis of the safety-first era is the U.S. Embassy in Baghdad, whose construction began in 2005 and which opened in 2009. Located behind 9-foot blast walls on a compound the size of the Vatican City within Baghdad's Green Zone, the $736 million embassy features a setback 2.5 times the normal distance, housing for hundreds of employees and Marines, and an independent electricity and water system.

The "Fortress America" on the Euphrates along with the cookie-cutter mini-fortresses being built around the world, provoked their own backlash. "We are building some of the ugliest embassies I've ever seen. We're building fortresses around the world. We're separating ourselves from people in these countries. I cringe when I see what we're doing," said Sen. John Kerry at a Foreign Relations Committee hearing in 2009.

The pendulum has begun to swing the other way under Secretary of State Hillary Clinton's tenure. In July 2009, the American Institute of Architects issued a report with recommendations on improving embassy design. In particular, it recommended making standards more flexible when possible and moving away from SED. In 2010, the OBO established a new Design Excellence initiative to improve the aesthetics, location-appropriateness, and environmental sustainability of embassies. "There's a definite move away from 'one size fits all,'" says Loeffler. "There hasn't been this much of a positive statement from the department since the 1950s."

The design of the new U.S. Embassy in London by the firm KieranTimberlake to replace famed architect Eero Saarinen's building from the height of the 1950s Modernist era, though mired by controversy throughout the design and panned by some architecture critics, is an example of the new spirit of compromise between design and security. Rather than blast walls, its setback includes a water feature and green space meant to be less disruptive to the site. Skidmore, Owings & Merrill's energy-efficient design for the U.S. Embassy in Beijing, which opened in 2008, has won a number of architecture awards. (Carrying this spirit over into more sensitive projects like the planned expansion of the U.S. embassies in Kabul and Islamabad may prove more difficult.)

It's still too early to say whether this week's attacks will shift the State Department's priorities back toward security; the OBO did not respond to requests for comment. The Cairo embassy that was attacked this week was built between 1982 and 1987, and it was not planned according to the Inman standards, though it had since received security upgrades. (If it were being built today, it would likely be outside the city rather than in the affluent Garden District — walking distance from downtown and Tahrir Square.) In Benghazi, Libya, there has been scrutiny that the consulate — where U.S. Ambassador to Libya Christopher Stevens was killed — was an "interim facility" with no Marines providing security and without features like bulletproof glass or reinforced doors that are standard in embassies.

In the end, of course, diplomatic postings in politically sensitive regions will always carry risks, and embassies will always be targets for demonstrators or militants angry at U.S. policies. There may indeed have been some troubling security lapses at U.S. embassies over the past week, and procedures may need to be changed. But for all accounts, Stevens was a diplomat who believed it was worth taking risks to interact directly with the people of the country where he was posted. It would be unfortunate if his death were used as a pretext to further isolate U.S. diplomats behind blast walls and razor wire.