Accessibility links
Shuttle Endeavour To Begin Voyage To New Home Piggybacking on a modified jumbo jet, the retired space shuttle will make its way from Florida to a permanent display site at the California Science Center. After this week's final flight, the 170,000-pound shuttle still has to navigate the streets of Los Angeles, which is no easy task. 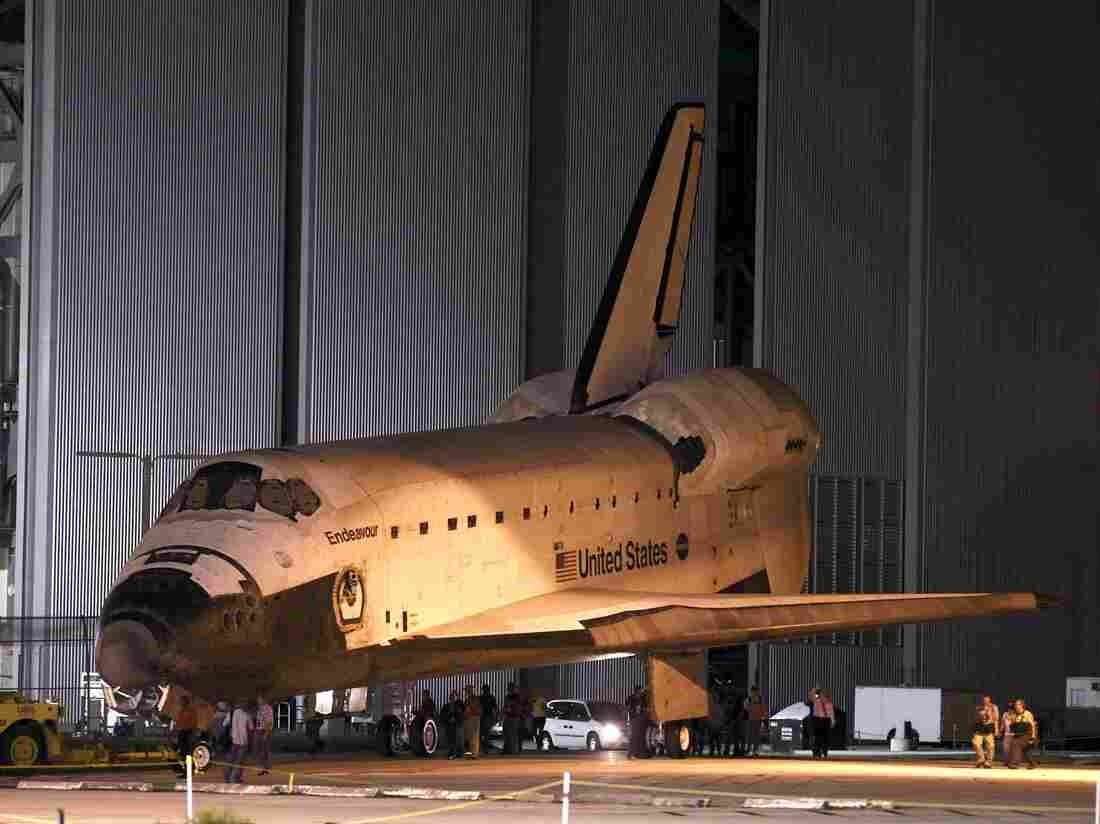 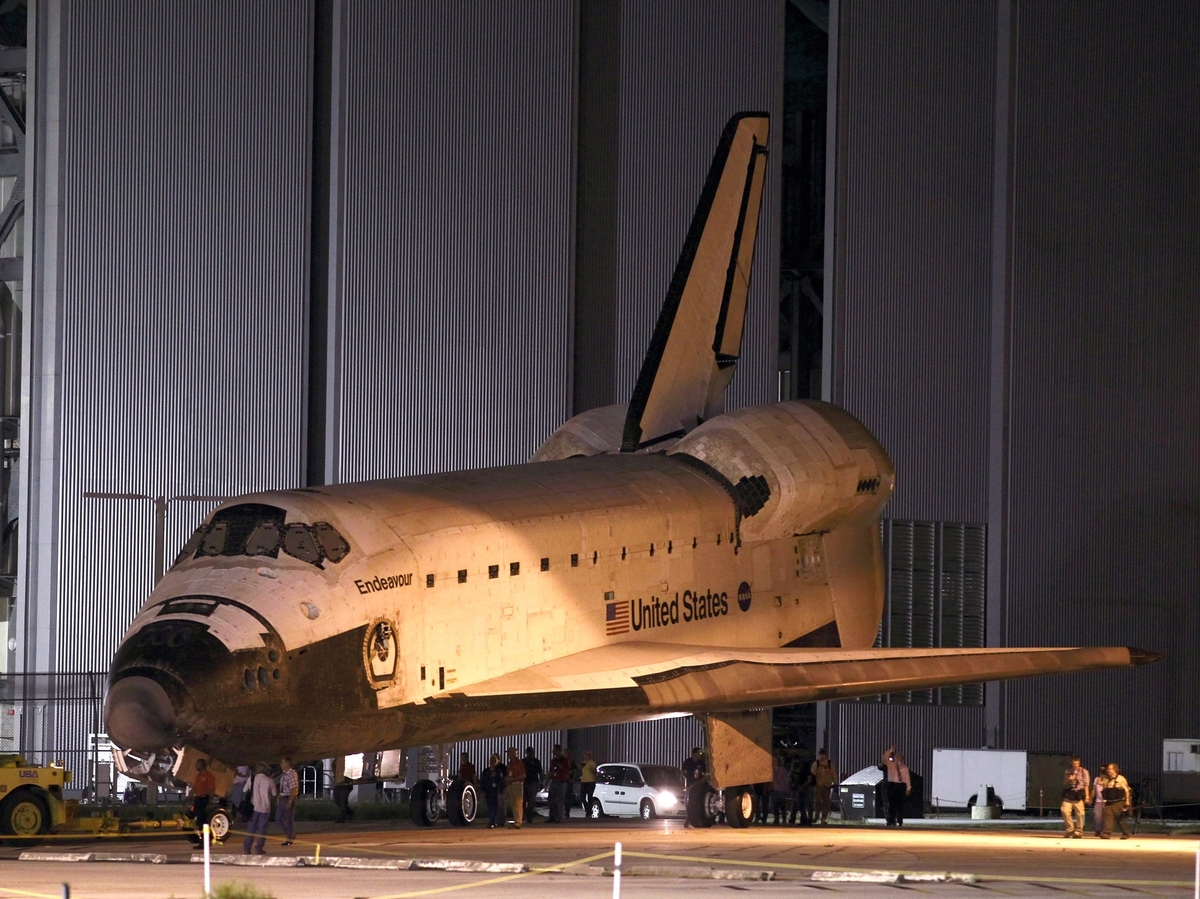 Space shuttle Endeavour begins a kind of farewell tour this week. The shuttle will set off on a cross-country trip to its retirement home, flying from Florida to Los Angeles on the back of a modified jumbo jet.

Along the way, the spaceship will stop off in Houston, home of NASA's Mission Control and, weather permitting, fly over NASA centers and various landmarks in cities that include San Francisco and Sacramento.

If all goes as planned, the shuttle will take off from Kennedy Space Center at sunrise on Wednesday and land at Los Angeles International Airport on Friday. Endeavour was scheduled to leave Florida on Monday but bad weather has delayed the start of the trip.

Then, after processing at the airport, the shuttle will have to make a long, unprecedented trip through city streets. The giant spaceship will ride on top of a special transporter for about 12 miles.

That two-day, 1-mile-per-hour trip is scheduled for mid-October, and the planning for it has rivaled the amount of preparation it used to take to launch Endeavour into space.

That's because Endeavour is simply huge: Its wingspan is 78 feet and the tip of its tail is five stories off the ground. Getting it through the city streets in one piece is no easy feat.

Taking the space shuttle apart and transporting it in pieces just wasn't possible because of the way it's covered in heat shield tiles, explains Ken Phillips, curator for aerospace science at the California Science Center, which won a fierce competition last year to get one of NASA's retired shuttles.

"You couldn't take the tail off it," Phillips says. "You can't pull the wings off and do things like we could with other aircraft."

So the iconic shuttle will be a surreal sight, moving slowly down wide commercial boulevards and passing places like Starbucks coffee shops and fast-food joints.

The route was selected after a team of engineers donated hundreds of hours to figuring out the best way to get the intact shuttle from the airport to the science center. They had to find streets that were wide enough, not too steep, and able to bear the weight of the 170,000-pound spacecraft. They used computer simulations and lasers to precisely measure distances to possible obstructions, like buildings to traffic lights. A lot of stuff has to be moved.

"For almost seven months now, we've been elevating power lines so that the tail can clear the power lines," notes Phillips.

Workers have also been cutting down trees. Nearly 500 trees need to go. And that's upset some local residents. 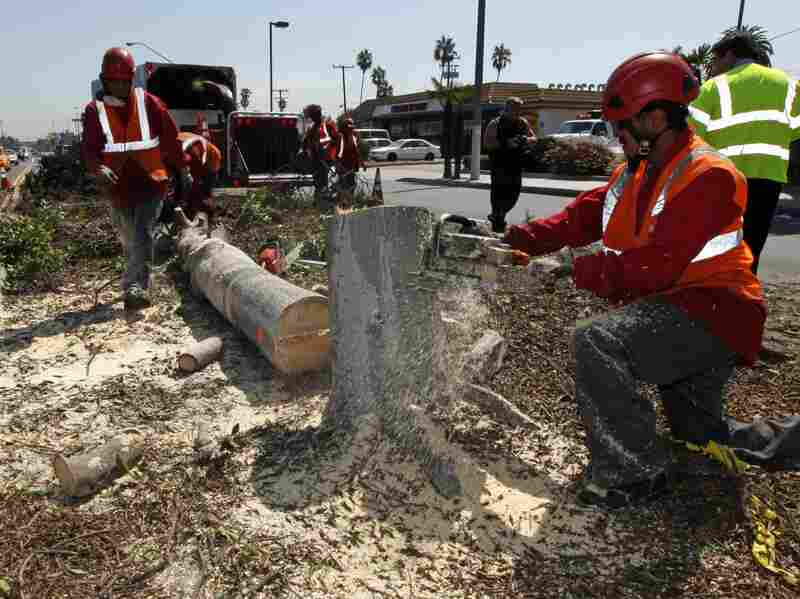 Workers remove a tree from a median in the middle of Manchester Boulevard in Inglewood, Calif., on Sept. 4 to make room for Endeavour. Reed Saxon/AP hide caption 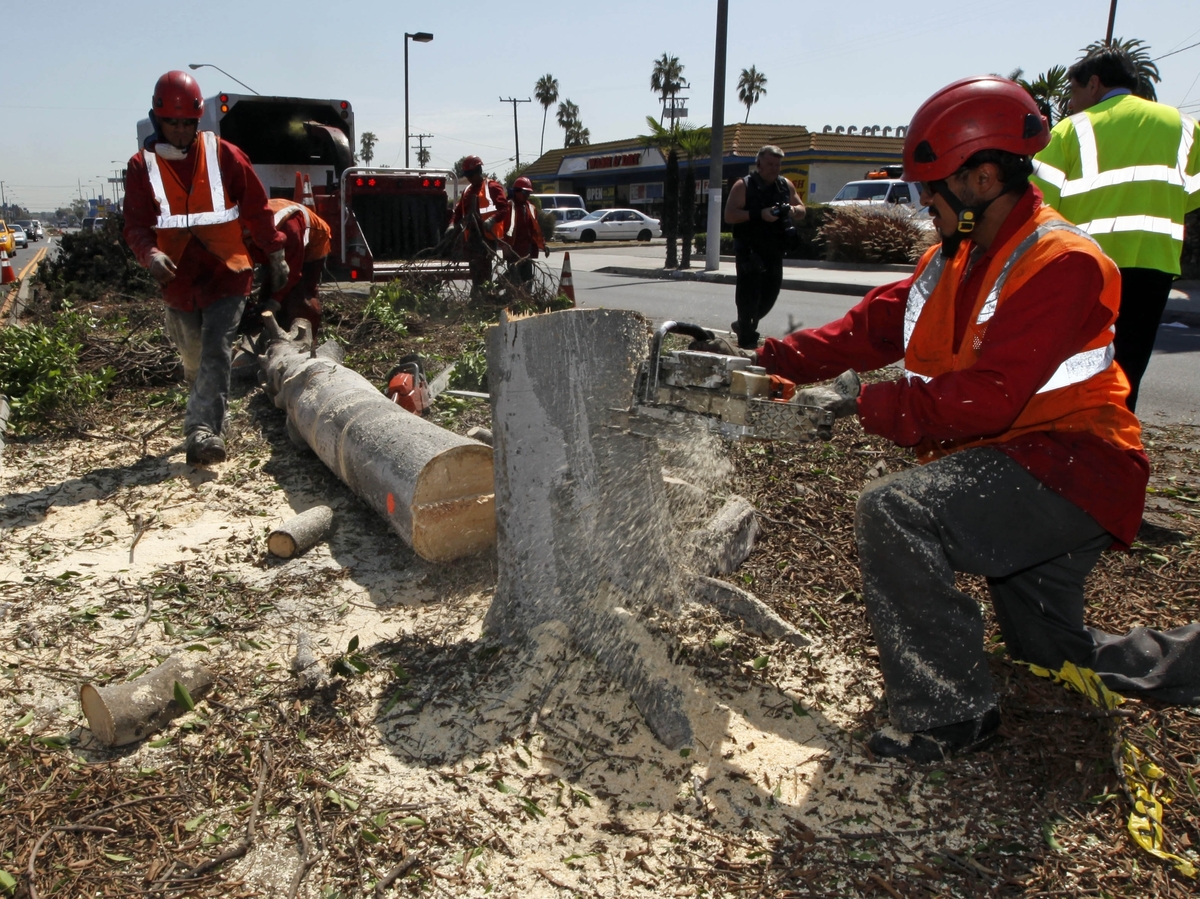 Workers remove a tree from a median in the middle of Manchester Boulevard in Inglewood, Calif., on Sept. 4 to make room for Endeavour.

The science center says the vast majority are small trees. It's promised to not just replace them but plant even more in a 2-for-1 deal.

Local officials have approved the plans. Mawusi Watson, chief of staff to the city administrator for Inglewood, says, "This is a once-in-a-lifetime opportunity. And in municipal government, it's rare that you get an opportunity to participate in such a nationally significant event."

Even with obstructions gone, the route will sometimes be a tight squeeze. At some spots, there are clearances of just 6 inches or so, says Phillips.

"And as a curator, to be perfectly candid, that makes me a little nervous," Phillips says, noting that although the shuttle's tiles were designed to withstand the extreme heat of re-entering Earth's atmosphere, they're actually very fragile. "You could take your thumb, for example, and just punch it right through one of the tiles."

After Endeavour is safely at its final resting place, NASA will have delivered three of its four shuttles. The others went to museums in New York and outside Washington, D.C.

The last shuttle left will be Atlantis, and it will make the shortest trip of all. It's staying in Florida, at the visitor center right next door to the Kennedy Space Center.