Accessibility links
With Hats And Umbrellas, Senegalese Fill A City Niche In many cities around the world, certain ethnic groups are often associated with particular occupations. Cheikh Fall, like many other Senegalese immigrants in New York, makes his living as a street vendor. He lives by the motto, "Work like you're never gonna die, and worship like you will die tomorrow." 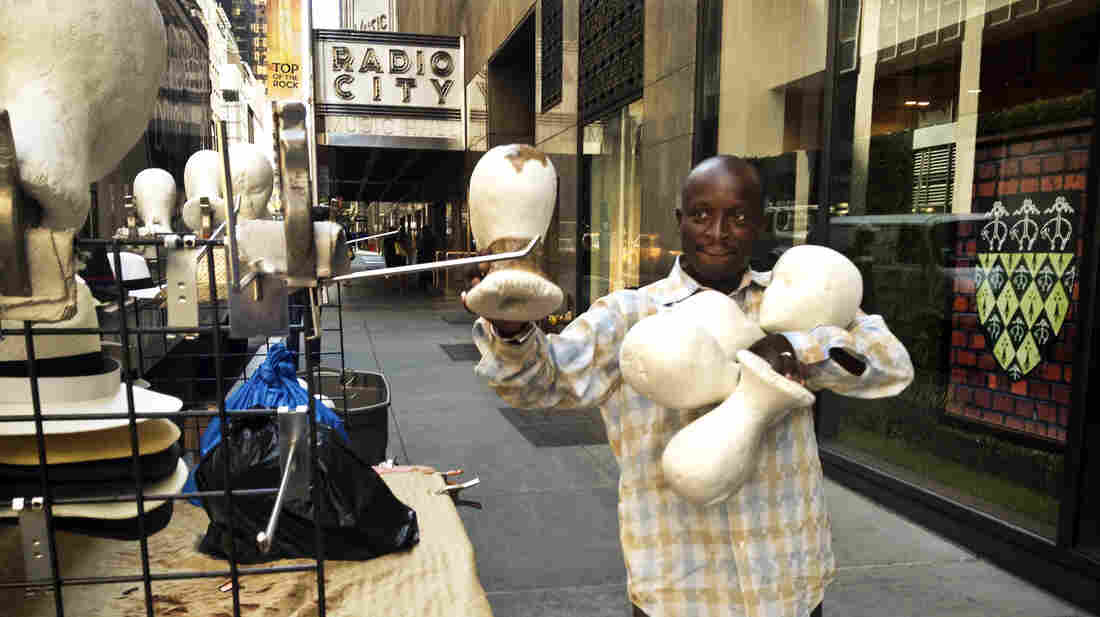 Senegalese vendor Cheikh Fall prepares his stall in front of Brooks Brothers on 51st Street, just off the Avenue of the Americas in New York City. Fall runs an association of Senegalese vendors that deals with the city over licensing and regulations. Art Silverman/NPR hide caption 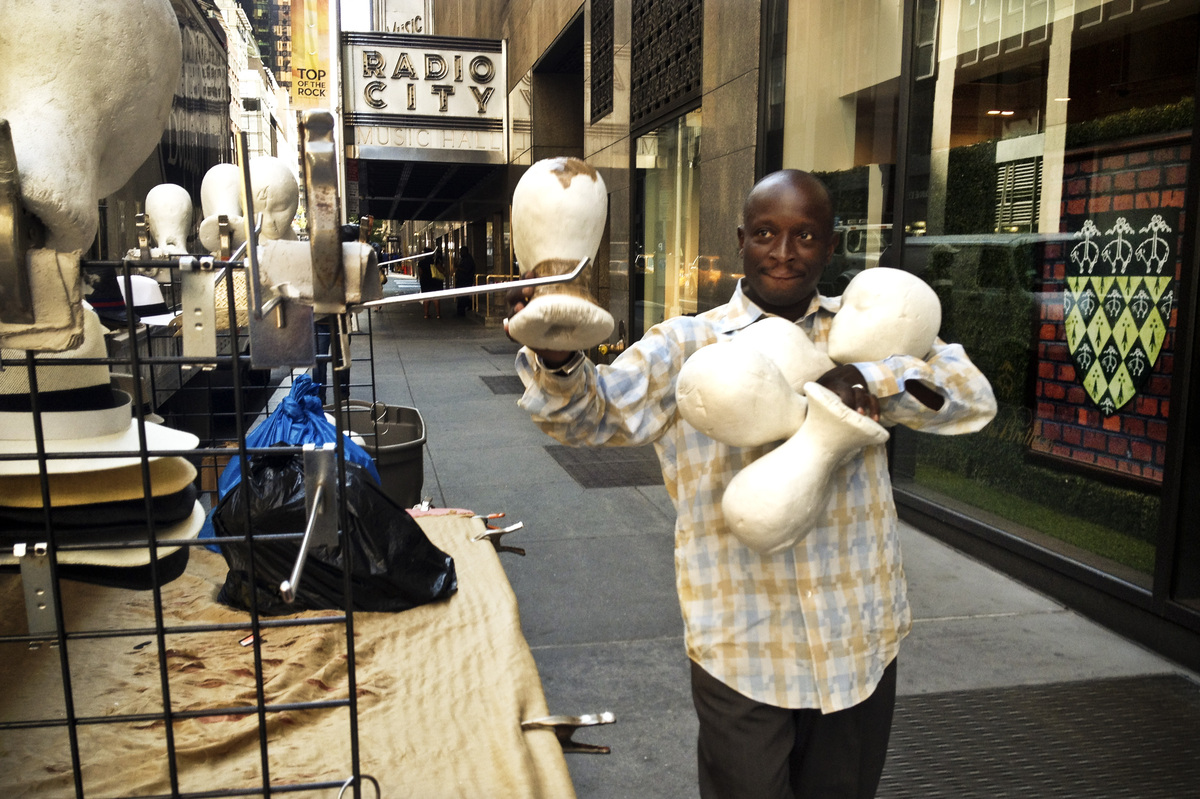 Senegalese vendor Cheikh Fall prepares his stall in front of Brooks Brothers on 51st Street, just off the Avenue of the Americas in New York City. Fall runs an association of Senegalese vendors that deals with the city over licensing and regulations.

Careful planning can transform the shape and life of a city. But sometimes, a city's features develop spontaneously — like the immigrant enclaves that grow around certain jobs and trades in urban centers like New York.

Occupational cliches have been a fact of life in the Big Apple for generations. Historically, New Yorkers thought of Jewish tailors, Italian greengrocers or Irish policemen, says Philip Kasinitz, a sociologist with the City University of New York.

Kasinitz says social capital — family connections and contacts — created those occupational associations, and still does, even as the immigrant groups change.

In today's New York, one particular group — the Senegalese — occupy a very visible commercial niche, selling umbrellas, handbags, hats and scarves from tables or carts on sidewalks all across the city. 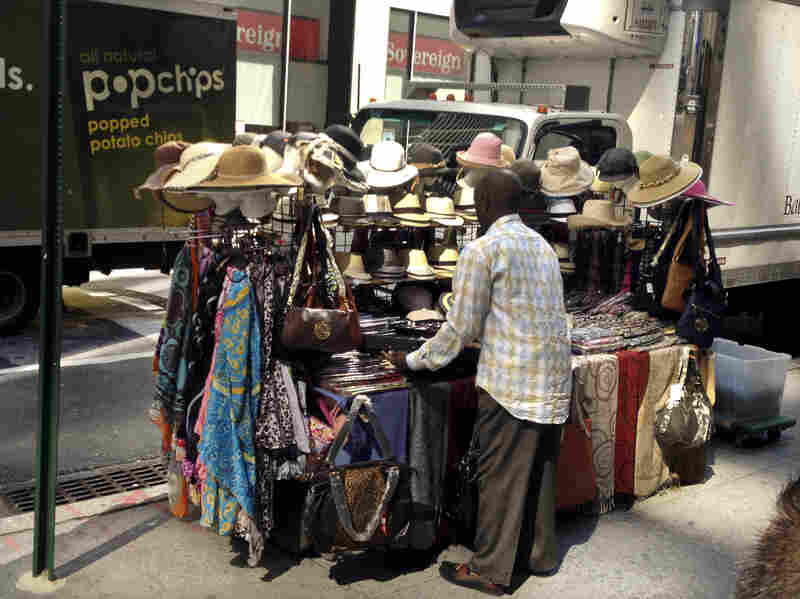 Cheikh Fall sets up his stall. He lives by the motto, "Work like you're never gonna die, and worship like you will die tomorrow." Art Silverman/NPR hide caption 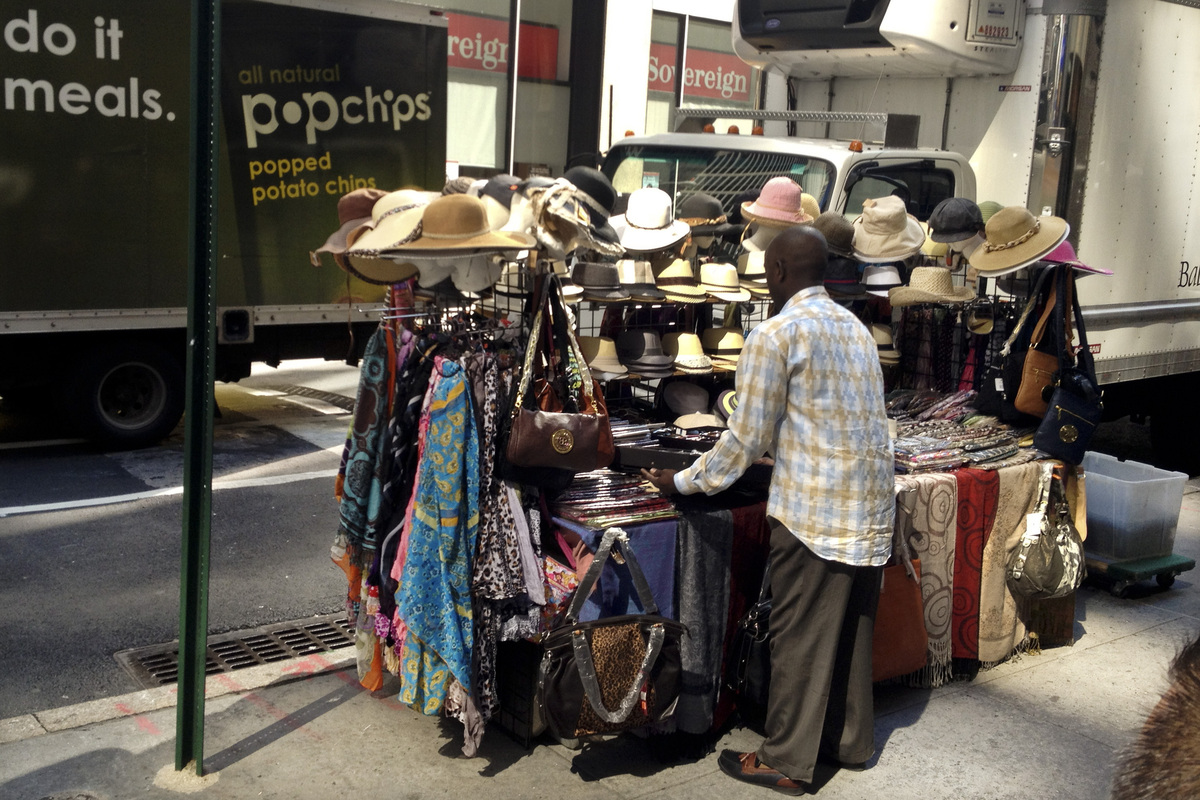 Cheikh Fall sets up his stall. He lives by the motto, "Work like you're never gonna die, and worship like you will die tomorrow."

Making A Living On The Weather

Senegalese vendors have become so visible in the past two decades that the group has achieved cliche status among New Yorkers — especially when it rains.

"The joke used to be that you got very depressed when you saw the Senegalese umbrella vendors setting up," Kasinitz says. "Because no matter how nice a day it was, that meant rain was coming soon. They knew."

"We know ahead at least five days," says Cheikh Fall, who set up his table near Radio City Music Hall on a recent afternoon.

Since the sidewalk vendors depend on the elements, he says, they follow the weather forecasts religiously. "We start following the rain from Florida to here, from Chicago to here."

Fall says the vendors know which forecasters to believe and which to discount. And, he says, if you could bet against the weather forecasts, the Senegalese community would be full of rich people.

Fall, 45, is a father of four with a thin mustache and a clean-shaven head. He runs an association of Senegalese vendors that deals with the city over licensing and regulations. His table boasts fedoras, ladies' hats, scarves and sunglasses, but all those items take second place to umbrellas on a rainy day.

Fall says he's the son of an airline executive, but most of his fellow vendors grew up less well-off. When they reached the United States, he says, they gravitated toward a business that feels somewhat familiar.

"Most of them was traders or farmers [back in Senegal]," Fall says. "And if you're a farmer, you have to trade your crops. So coming to a city like New York, where there's no factories, there's no farming ... trading was the only thing that was available and that they can relate to, because they was doing it also back home."

Many Senegalese immigrants also came to New York without papers and were ineligible to work in other jobs.

In Fall's case, he came to attend college 20 years ago. He dropped out, worked as a court interpreter, became a citizen and then enlisted in the Navy.

With $450 and a tip from another vendor about how to connect with wholesalers (go to trade shows, he said), Fall went into business in 2003.

And when Apple unveiled its new iPhone, Fall selected Radio City Music Hall, rather than the Broadway Apple Store, based strictly on personal experience.

"People are not focusing on what's next to the Apple Store; they're only focusing on the new product they're going to get," Fall says. "They don't care about the hat, they don't care about sunglasses ... After you go to Apple store, and you bought something you like, or something that's expensive, then [you think], OK, I spent enough money today, I'm not going to buy me a hat."

Fall says Senegalese immigrants bring a strong work ethic that accounts for their success as sidewalk vendors in cities all around the world.

Nearly all of the Senegalese vendors in New York are adherents of a Senegalese branch of Sufi Islam, a very spiritual form of the faith. Fall points to the teaching of a Senegalese sage that guides him and many of his countrymen: "Work like you never gonna die, and worship like you will die tomorrow."

And the work is hard. It takes Fall about 40 minutes to unpack his van and get set up early enough to catch New Yorkers on their lunch break. It takes just as long, he says, to tear down and pack up after the evening rush hour. A bathroom break requires another vendor to watch the table, and friends in nearby restaurants or hotels who will let him use their restroom.

We Got The Beat: The 'Heart' Of Your City

Fall says he can support his family doing this, but there's no money for extras. So he's trying to move up. Like so many of the city's pushcart peddlers before him, he's taking his business indoors; he and his wife have opened a shop in their Harlem neighborhood.

Perhaps in a generation, vendors like Fall will all be shop owners, making the Senegalese sidewalk vendor as archaic a cliche as the Jewish tailor and the Italian greengrocer.

"There aren't too many Tibetans in New York," Kasinitz says, "but they do seem to be quite concentrated in child care work ... [On] the question of the preferred child care worker, people from that part of Asia are now beginning to have that image."