Accessibility links
Kitchen Window: How To Upset The Apple Cart, Deliciously It might look like a typical apple pie, but this is no cinnamon-sugar bomb. Cut into it and you'll find seasoned pork along with the sliced fruit. It's just one of many savory ways to highlight the versatile apple.

How To Upset The Apple Cart, Deliciously

How To Upset The Apple Cart, Deliciously 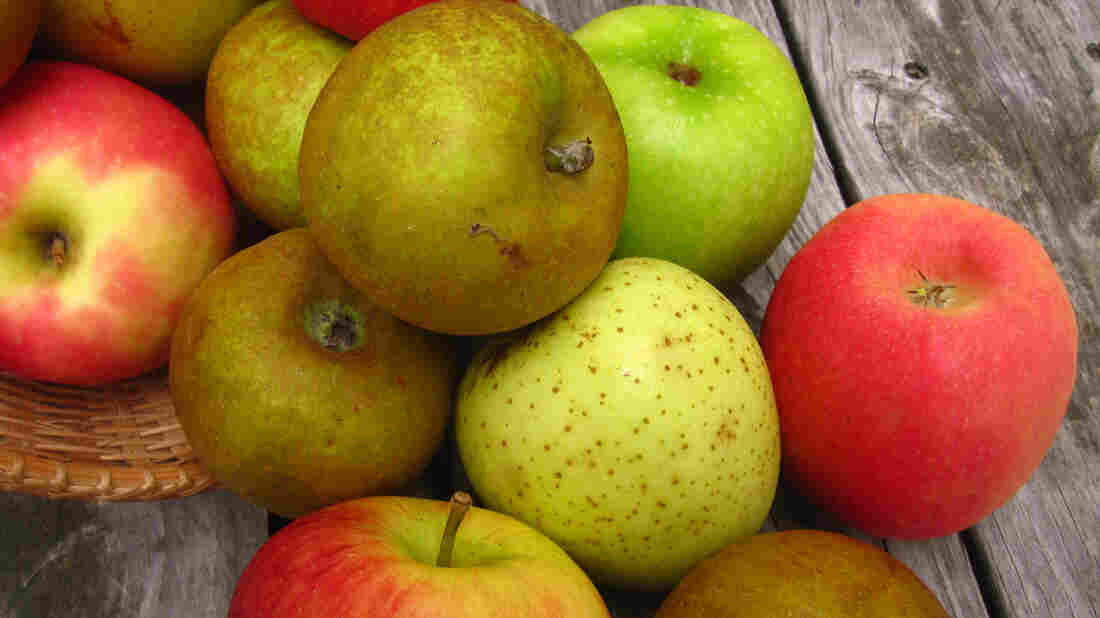 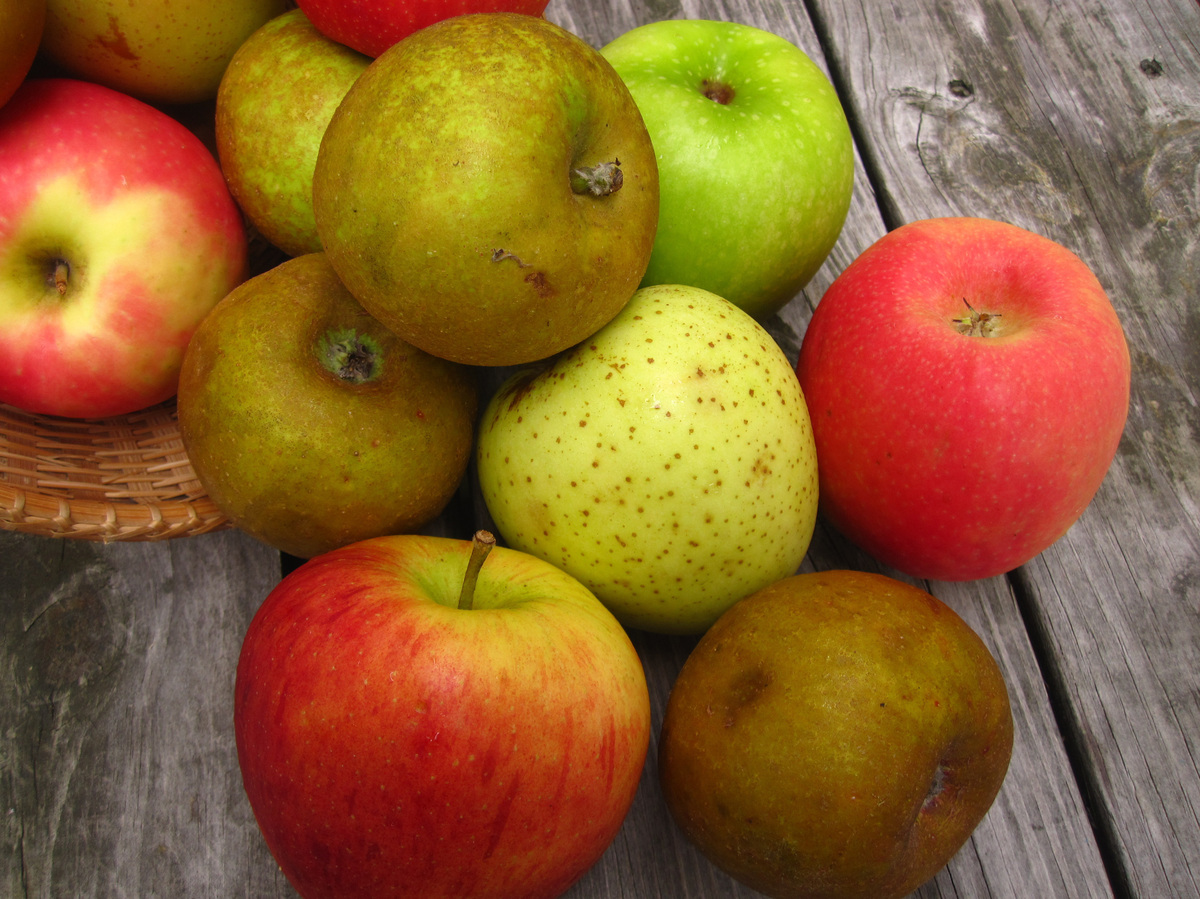 Apples are the onions of the fruit world: abundant, versatile and a friend to almost any flavor. Apples and onions even go well together.

The apple is a natural savory. In a soup or puree it adds complexity to butternut squash or parsnips. In sandwiches — my, oh my, oh my, can you say 'warm gooey grilled cheddar layered with slices of cold, crisp apple'?

As we enter the thick of fall, apples will tumble from their bins, a harmony of flavors, textures and hues — reds, yellows, browns and greens — that capture the very essence of the season. But when was the last time you thought of using an apple for anything besides pie, applesauce or cider? Maybe you tossed one into a salad. Maybe.

Americans eat 2.4 million tons of apples each year — or 15 pounds per person — second only to bananas (though the Virginia-based U.S. Apple Association is quick to point out that apples are the most often consumed domestic fruit). Which means we really should do more than stick them in a lunch box or sprinkle them with cinnamon.

Look at the Shakers. The late 18th-century religious sect had 49 ways to prepare apples — 49! Their recipes ranged from the standard pies and cakes to sausage-stuffed apples, apple "omelets" (a bit like souffle) and switchel, a tonic made of cider vinegar and used to chase their farmers' thirst during the harvest. They also invented the apple peeler, apple corer and that thingy that cuts them into quarters. To be fair, the Shakers often kept orchards with hundreds of apple trees, so they had a lot of incentive to use them inventively (and to be efficient about peeling and preparing them).

Michele Kayal is a food writer specializing in the intersection of food, culture and identity. Her work has appeared in The New York Times, the late great Gourmet, Bon Appetit, Conde Nast Traveler and many other national outlets. She writes regularly for The Associated Press and on her blog, The Hyphenated Chef.

These days, most Americans also have an abundance of apples at their disposal. Alongside the old McIntosh and Red Delicious, newer varieties such as the crunchy, big-juice Honey Crisp and candy-sweet Fuji can be found in nearly any supermarket. Heirlooms like the tartly complex Esopus Spitzenburg and the sweet, purple-skinned Black Oxford pop up at farmers markets. And apples with glamorous names like Jazz and Pink Lady — both "club varieties," that is, apples licensed only to certain growers and marketers — have become commonplace.

Of course, not all apples are created equal. Flavors can range from "floral" to "cherry or berry flavors," says Amy Traverso, author of The Apple Lover's Cookbook. They can taste "nutty" or "spicy" or have flavors of "pear or vanilla." Traverso says her favorite apple, the heirloom Ashmead's Kernel, "tastes like champagne with honey stirred in."

A friend to pork, where it mingles with sage and other fragrant herbs, and to duck, where its acid offsets the richness of the meat, the apple is a natural savory. In a soup or puree it adds complexity to butternut squash or parsnips. In sandwiches — my, oh my, oh my, can you say "warm gooey grilled cheddar layered with slices of cold, crisp apple"?

There's a reason Eve went for an apple and not an orange or a persimmon. Besides being tempting, apples are elemental. Adaptable. Basic. You can always count on the apple.

"If you don't know what to do," says James Haller, a New England chef and author of Cooking in the Shaker Spirit, "grab an apple."

Because of the variety of flavors and textures now available, choosing the right apple for the right purpose is more difficult than ever. Some general notes:

Whoa. Pork, apples and cheddar all snuggled together under a warm blanket of crust. This dish, adapted from Amy Traverso's The Apple Lover's Cookbook (Norton 2011), looks stunning on the table and tastes just as good. An absolutely perfect fall meal and a great party trick. 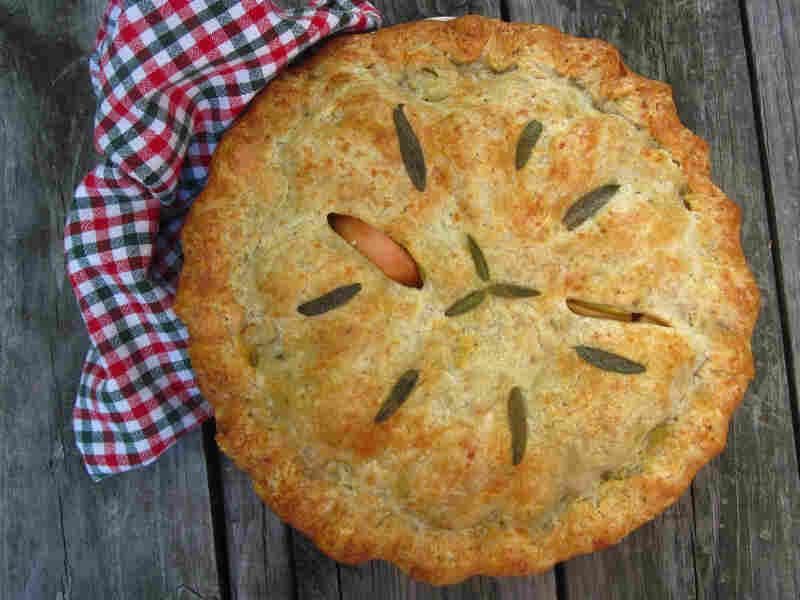 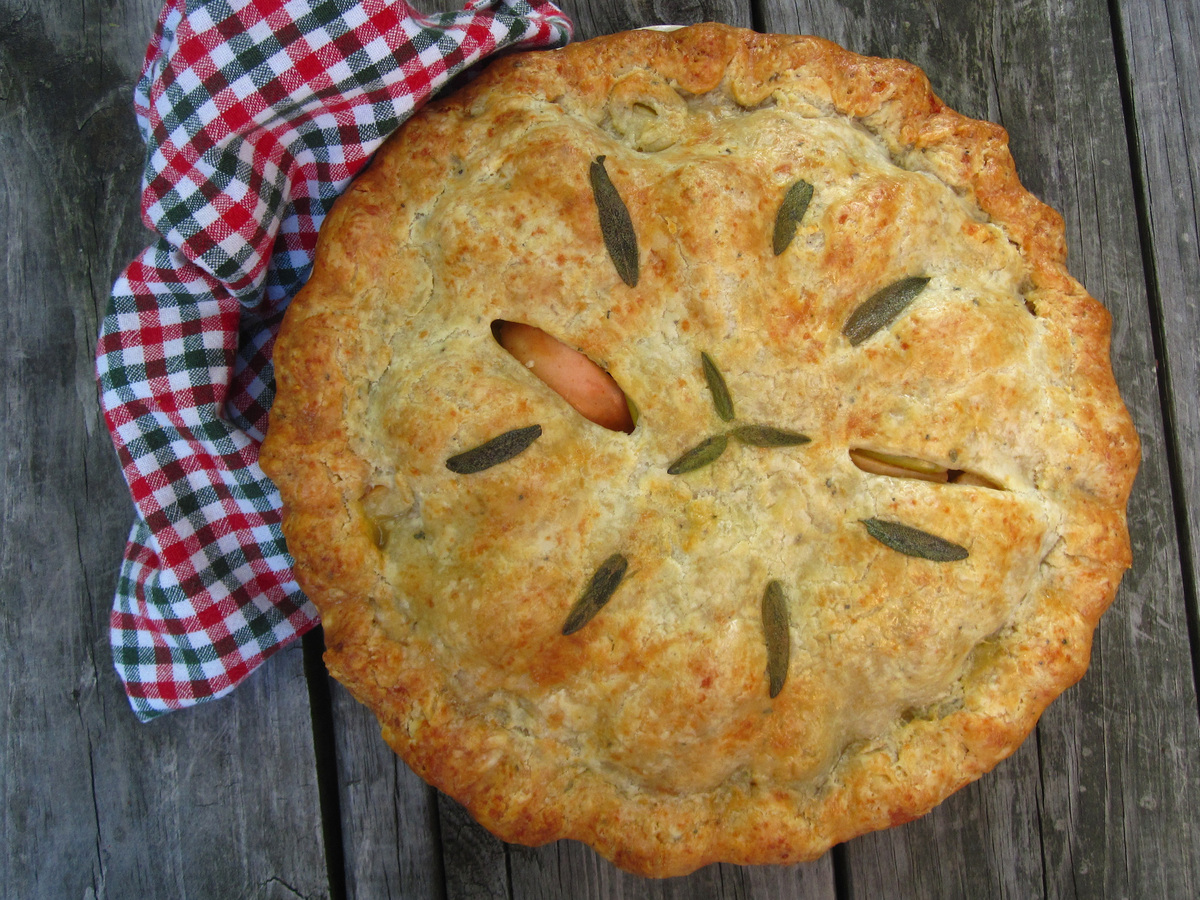 1 1/2 pounds (about 3 large) firm-tart apples (such as Granny Smith, Rome or Winesap), unpeeled, cored and cut into 1/4-inch thick wedges

To make the crust, in a medium bowl, whisk together the flour, sage and salt. Sprinkle the butter over the mixture and use your fingers to rub it in, rubbing your thumb against your fingertips to smear the butter as you go. Do this until the mixture looks like cornmeal with some pea-sized bits of butter remaining. Stir in the cheese with a fork until evenly distributed. Sprinkle 6 tablespoons ice water over the mixture and stir with a fork until the dough begins to come together. If needed, add an additional tablespoon or 2 of ice water (it should not need more than that).

Turn the dough out onto a lightly floured surface and knead 3 times. Gather the dough into a ball, then divide into two portions, one slightly bigger than the other. Press each portion into a disk and wrap in plastic wrap. Refrigerate at least 30 minutes.

To make the filling, in a skillet over medium-low heat, cook the apples without any oil, stirring gently until they just begin to soften, 5 to 7 minutes. Transfer to a dish and set aside. Add oil to the pan and increase the heat to medium-high. Add the onion, pork, brown sugar, salt and spices. Cook, using a wooden spoon to break up the meat, until it is lightly browned, about 10 minutes. Let the meat mixture cool for 10 minutes, then transfer to a food processor. Add the breadcrumbs and pulse 5 times until the mixture has the texture of coarse sand. Set aside. NOTE: You can prepare the recipe through this step a day or two before.

To prepare the crust, unwrap the larger disk of dough and put it in the center of a large sheet of parchment paper. Cover the dough with a second piece of parchment. Roll out, working from the center, to a 13-inch circle. Peel off the top piece of parchment and transfer the dough to a 9-inch, deep-dish pie plate, preferably glass or ceramic, draping any excess over the edge. Unwrap the smaller disk of dough and roll out as above, this time to an 11-inch circle. Set aside.

Pour the meat mixture into the bottom crust and gently smooth with a spatula. Arrange the cooked apple slices over the meat, pressing down to make the whole construction as smooth and neat as possible, mounding the apples if needed. Peel the top sheet of parchment off the top crust. Transfer, peeled side down, to the pie, then peel off the remaining parchment. Using a sharp knife, make two 3-inch slashes in the crust to allow steam to escape. Fold the edges of the bottom crust up over the top and crimp the edges to seal. Brush the crust with egg wash and decorate with sage leaves. Dab the leaves with a bit more egg wash to keep them from curling and burning.

Bake at 425 degrees for 10 minutes, then reduce the heat to 375 and bake until the crust is golden brown, 25 to 35 minutes more. Remove from oven and let cool 25 minutes before serving.

Apple and butternut squash is a common combination, but this soup, adapted from Jamie Oliver's Great Britain (Hyperion 2012), achieves unusually complex flavors by roasting the ingredients before they hit the blender. Delicious hot or cold. 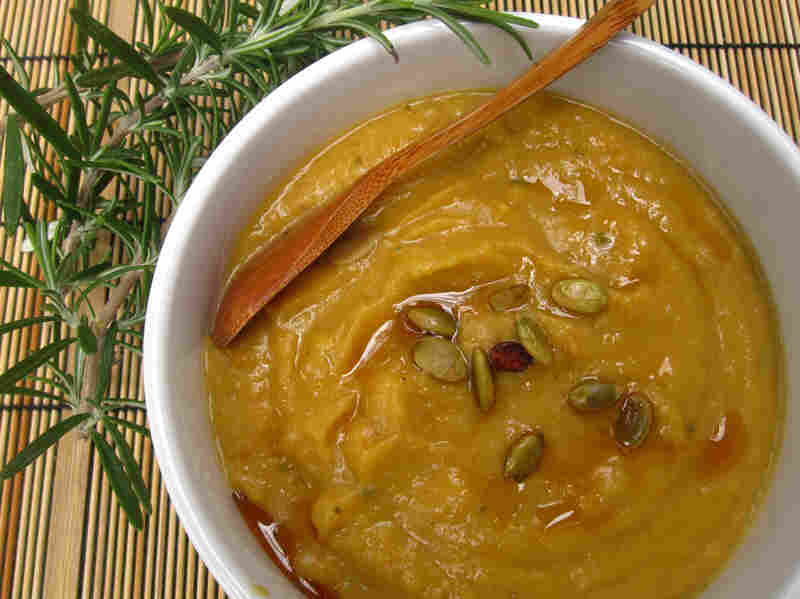 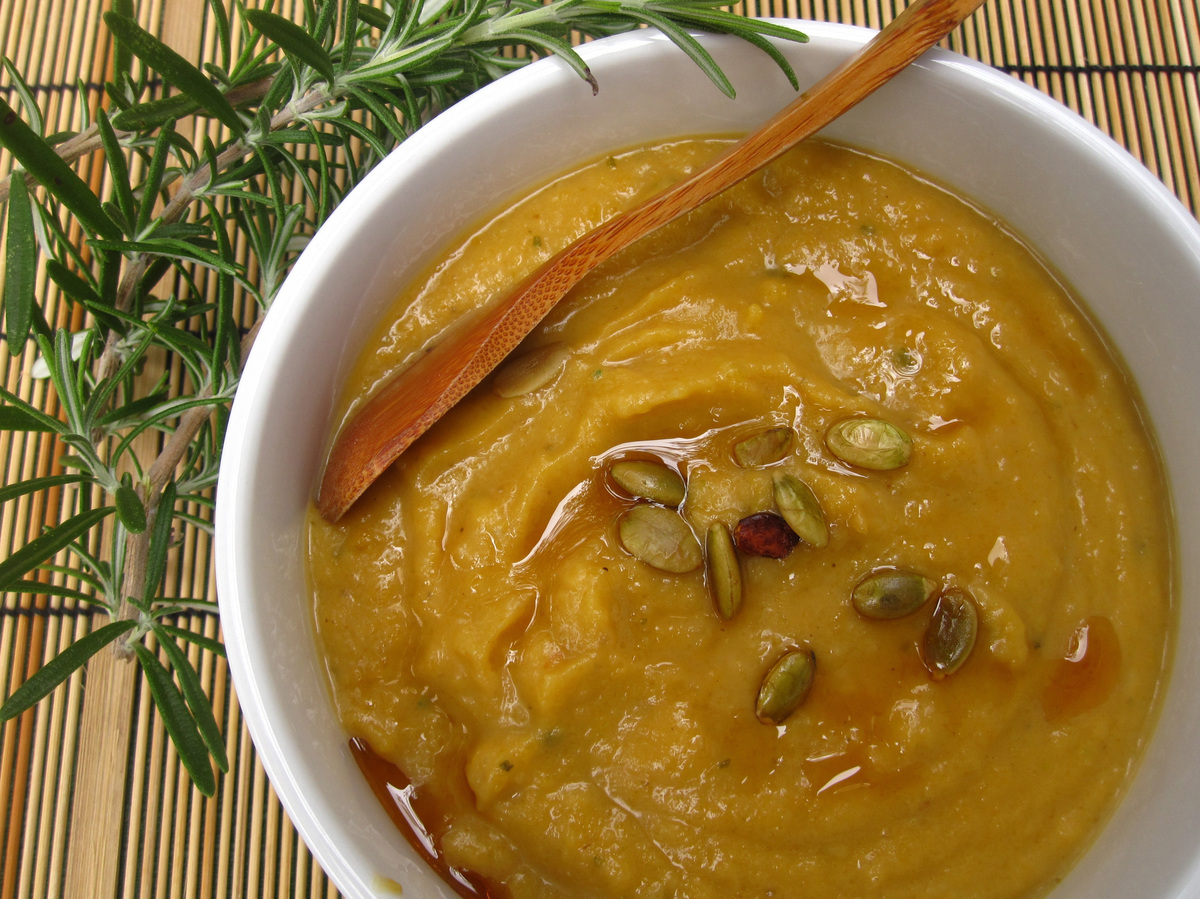 4 cloves of garlic, unpeeled and crushed

Spread the squash, apples, onion, chili and garlic on a baking sheet. Sprinkle with the salt, pepper, coriander and rosemary. Drizzle with 1/4 cup olive oil and toss until well coated. Roast for 45 minutes to 1 hour, or until all the vegetables are cooked through and golden.

Spread the pumpkin seeds on a small baking sheet and toss with 1 teaspoon olive oil. Sprinkle with salt. Roast alongside the vegetables for 10 to 15 minutes until toasted. Set aside.

Remove the vegetables from the oven. When they are cool enough to handle, squeeze the garlic from the peel. If you have an immersion blender, scrape the vegetables into a large pot. Deglaze the baking sheet with 1/4 cup boiling water, scraping at the burned-on bits to capture them. Add the water to the pot. Add the stock to the pot and puree, using the immersion blender.

If you are using a countertop blender, deglaze the pan as above and pour into the blender. Add roughly 1/3 of the vegetables from the baking sheet and puree. Transfer puree to a large pot. Continue this process with the rest of the vegetables, using the stock.

Once the vegetables are pureed in the pot, add the cream and bring to a simmer over medium-low heat. Simmer until the soup is warmed through and reaches your preferred consistency.

This fresh twist on the wilted spinach salad combines apples and bacon to create a sweet-salt-smoke sensation. This recipe is adapted from Amy Traverso's The Apple Lover's Cookbook (Norton 2011). 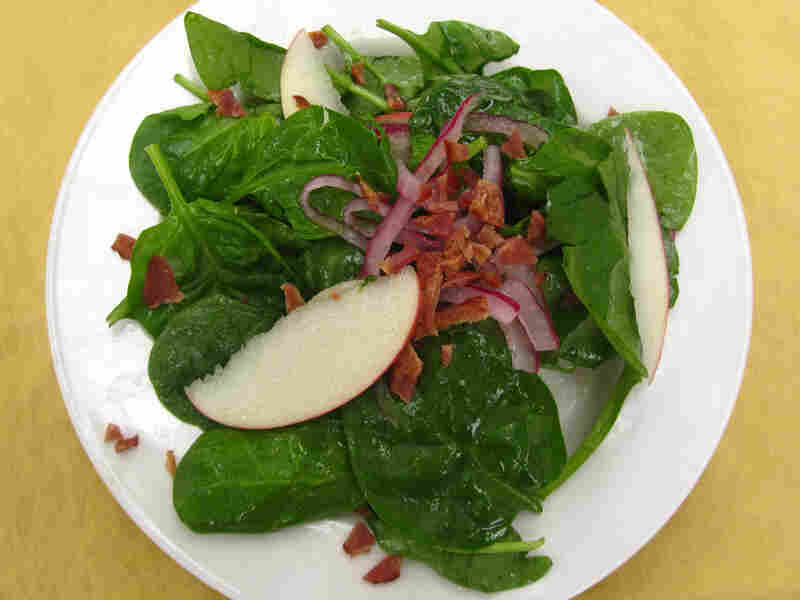 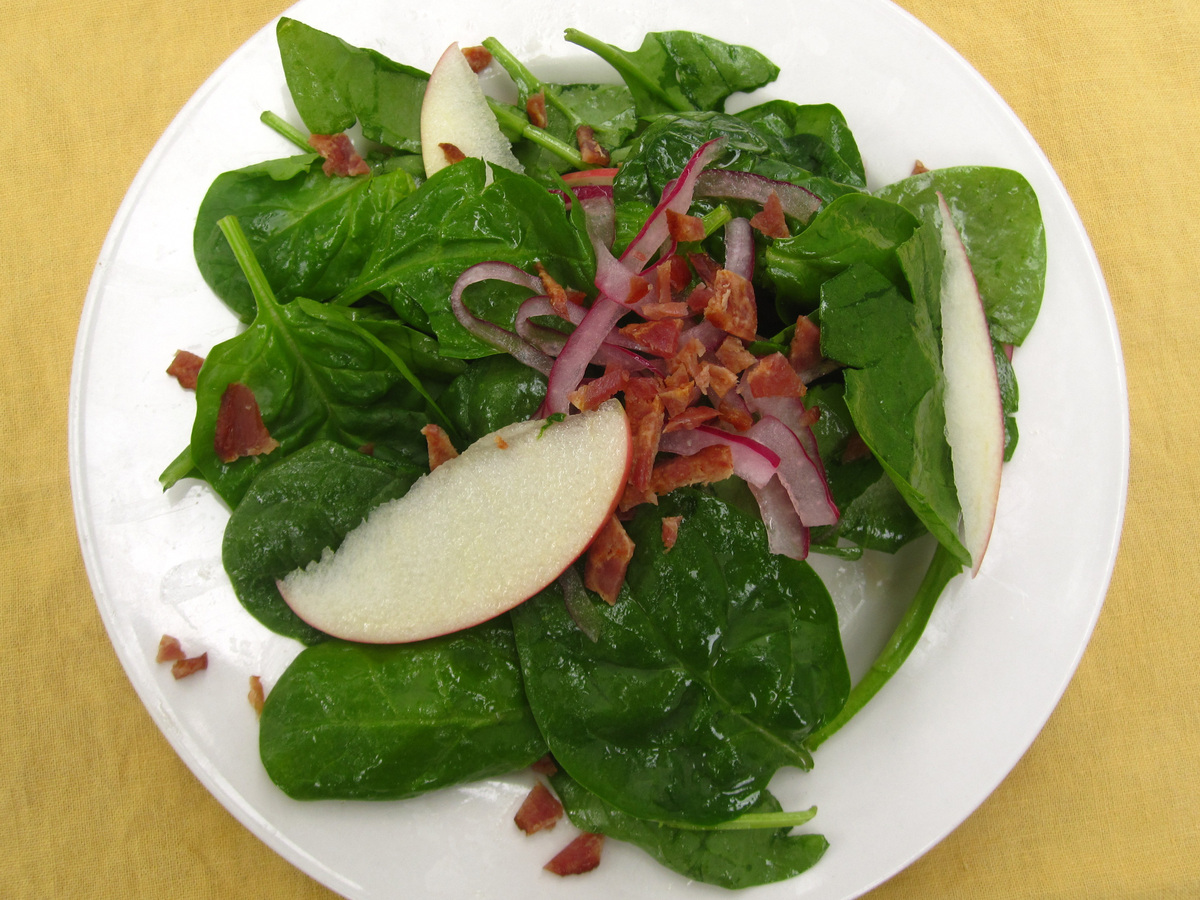 In a small bowl, whisk together the vinegar, honey and salt until the salt dissolves. Add the onion and let sit while you prepare the rest of the salad.

In a skillet over medium heat, cook the bacon until brown and very crisp, about 10 minutes. Crumble and set aside. Reserve 2 tablespoons of bacon drippings in a small bowl. Discard the rest.

In a large salad bowl, toss the spinach, onions and apple slices. Just before serving, add the vinaigrette to taste. Toss well. Top with the crumbled bacon and serve at room temperature.

This has become a fall favorite in our house. Warm and crunchy, with tangy, sweet and savory all working together, it's a perfect side dish for any hearty meat. Metal skewers work best. 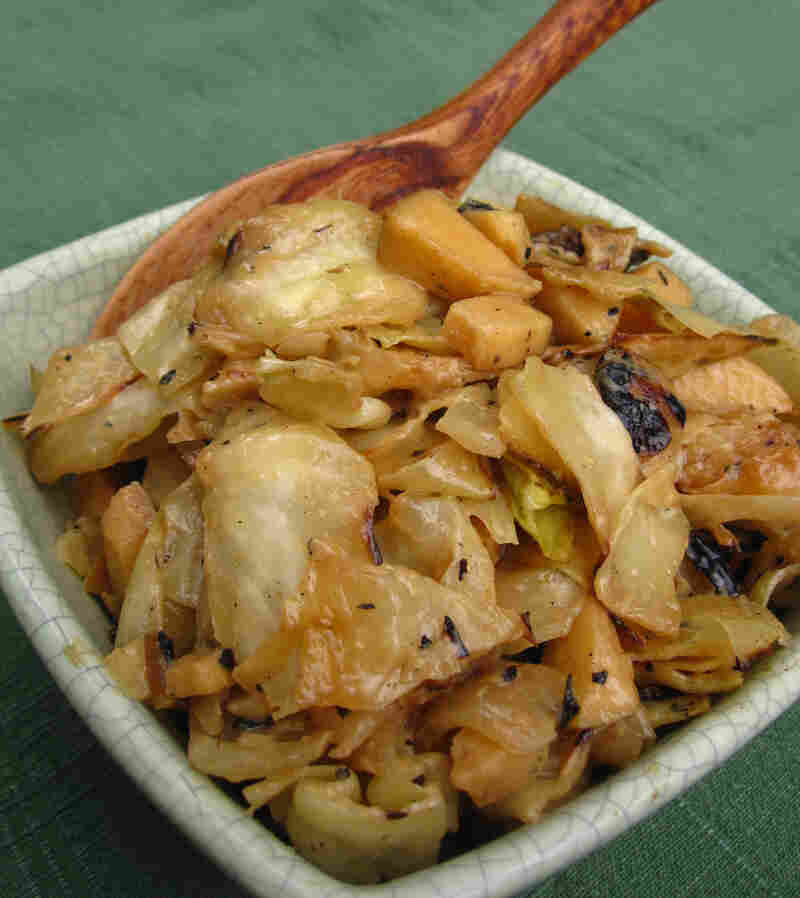 Heat the grill to medium. Run skewers through the cabbage and onion disks (go from edge to edge, not through the middle). Rub disks with olive oil on all sides and sprinkle with salt.

Place the disks on the grill, flat side down. Grill for 5 to 8 minutes, then turn. Grill for 5 more minutes or until the vegetables are charred and tender, but still hold their shape.

Slide the cabbage and onions from the skewers into a serving dish.* Chop roughly using kitchen shears.

Add the apple and toss well. In a small bowl, whisk together the celery seed, mustard and rice vinegar. Pour over the salad and stir until well mixed. Season to taste with more salt and pepper if needed. Serve warm.

*To save a step, use the serving bowl to carry your cabbage and onions to the grill — fewer items to wash.

Do you have one of those relatives who sprinkles salt on watermelon? Same principle at work here. Indians pepper fresh fruit with a spice mixture called chaat, and in Mexico many people like chili, salt and lime on their fruit or on vegetables such as jicama. This combination of salt-sweet-sour-spice gets your whole mouth going. 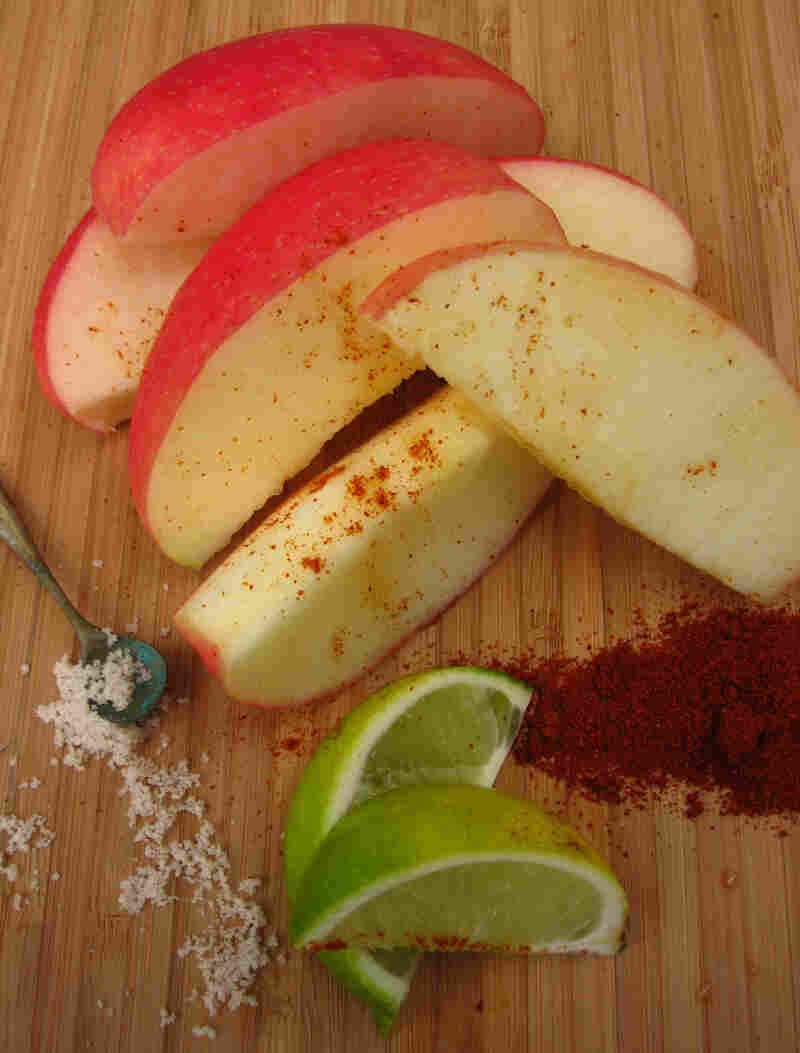 Makes 1 snack (or 2 smaller snacks, if you're sharing)

Core and cut the apple into thick slices. Squeeze the lime over the apple. Sprinkle with the salt and the chili.