Accessibility links
Why Does China Want A Mural In Oregon Destroyed? This summer, a businessman in an Oregon college town commissioned a huge mural depicting a Tibetan monk setting himself on fire. Soon after the mural went up, the Chinese consulate in San Francisco sent a letter to the city's mayor insisting it be removed before it "tainted" U.S.-China relations. 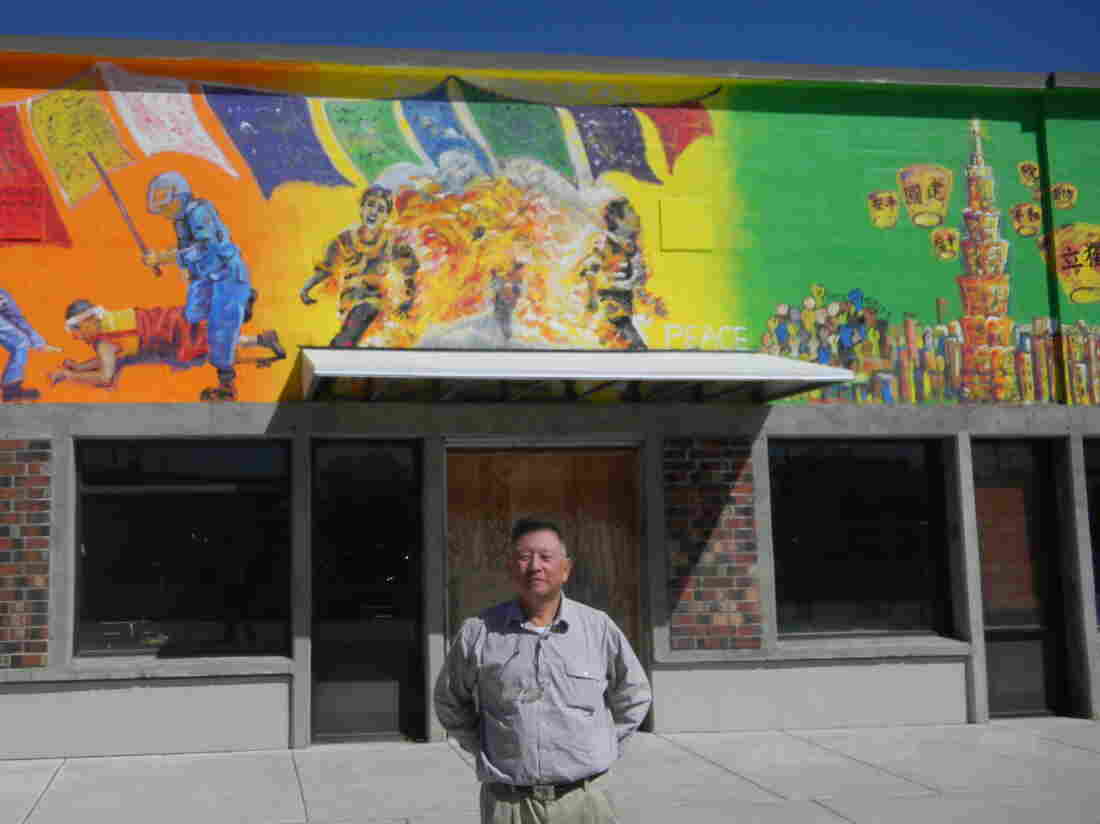 Businessman David Lin stands in front of a mural depicting a self-immolating monk he commissioned in Corvallis, Ore. The Chinese consulate in San Francisco sent a letter to Corvallis' mayor requesting the mural's removal. Chris Lehman for NPR hide caption 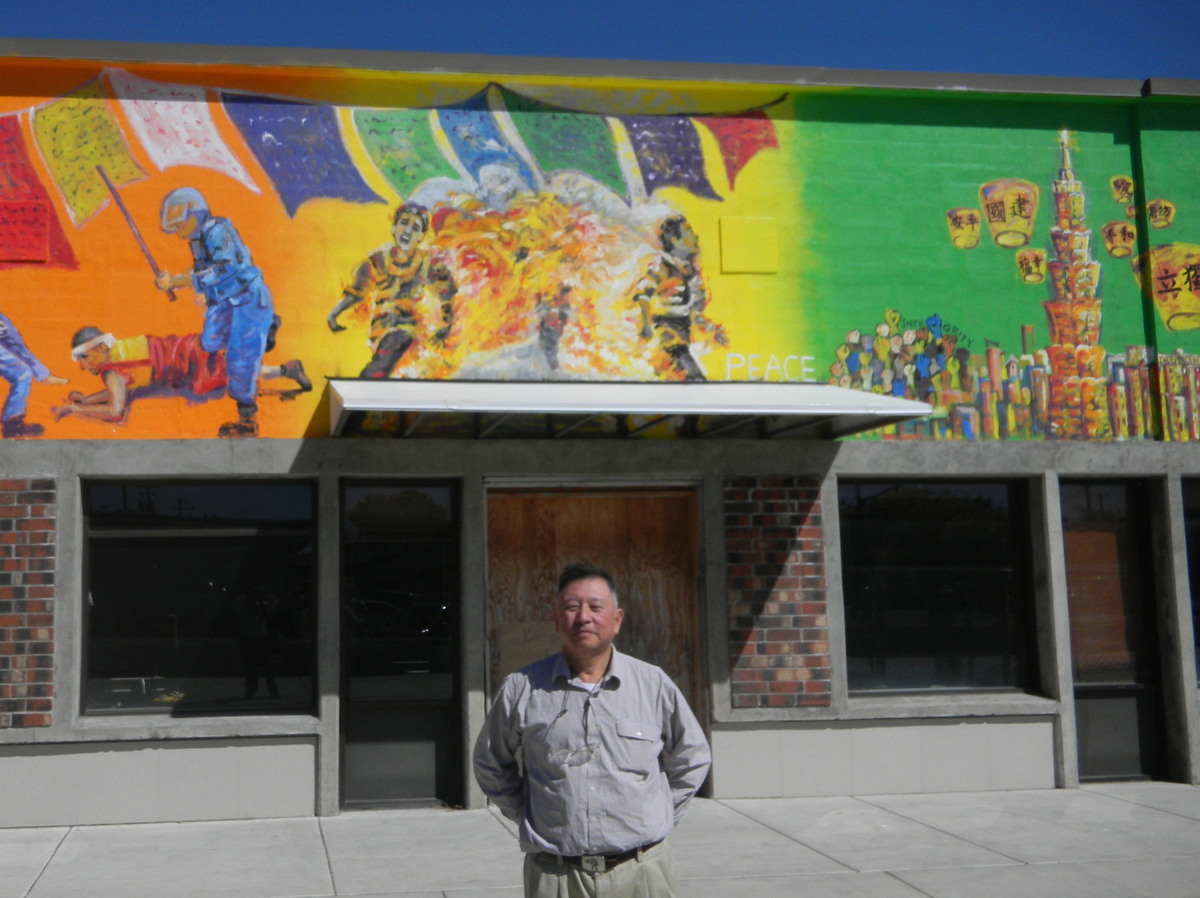 Businessman David Lin stands in front of a mural depicting a self-immolating monk he commissioned in Corvallis, Ore. The Chinese consulate in San Francisco sent a letter to Corvallis' mayor requesting the mural's removal.

The mural in downtown Corvallis, Ore., is big: 10 feet high and 100 feet long. One side shows a peaceful countryside setting in rural Taiwan. The other shows police beating protesters in Tibet and a Buddhist monk setting himself ablaze in protest.

"You burn yourself to death. Painful. And we cannot ignore that," says David Lin, the Corvallis businessman who commissioned the mural. Human rights groups say more than 50 people, many of them monks, have self-immolated over the past three years.

The Chinese consulate in San Francisco sent a pointed letter to Corvallis' mayor insisting the mural be removed before it "tainted" U.S.-China relations.

On Tibetan Plateau, A Sense Of Constant Surveillance

As the letter from the Chinese consulate makes clear, the government there isn't ignoring Lin's attempt to promote political independence for Tibet and his native Taiwan. The letter was a surprise to Julie Manning, the mayor of the small college town, population 54,000, about 80 miles south of Portland.

"I really didn't see that there was a role for local government in some sort of intervention," Manning says.

Manning wrote the consulate back that "the mural reflects protected speech under the First Amendment of the U.S. Constitution."

After receiving the mayor's letter, consular officials flew to Oregon to talk with her. Manning calls the meeting "cordial." She says she told the Chinese officials she couldn't order the painting destroyed and she wouldn't even if she could. Chinese consulate officials in San Francisco didn't respond to requests for comment.

But at a recent press briefing at the Chinese foreign ministry in Beijing, spokesman Hong Lei responded to a question specifically about the Corvallis mural.

"China's position on Taiwan and Tibet-related issues have been consistent and clear," Hong said. "We oppose anyone abroad using any method to engage in Taiwan's or Tibet's separatist independence activities."

Tibet was incorporated into the People's Republic of China in 1950, and its sovereignty has been a charged international issue ever since. While Taiwan is self-governed, China makes claim to the island and the nation's legal status remains controversial.

It's certainly not the first time the Chinese government has reacted negatively to expressions of support for Taiwan or Tibet. But Todd Stein of the International Campaign for Tibet says that until now, most of the Chinese attention has been directed toward larger cities or states.

"The fact that they would bother to travel all the way up to the cozy college town of Corvallis shows that they kind of leave no stone unturned when it comes to trying to impose their narrative," Stein says.

The mural has spurred a lot of discussion among the roughly 900 Chinese students at Oregon State University in Corvallis, according to Cheng Li, head of the Chinese Student Association there. He says the painting doesn't bother him. Still...

"Despite how I think, I think this mural or this wall painting will actually hurt some Chinese people's feelings," Cheng says.

Lin says he's not backing down. And he says the support he's received from both the mayor and people stopping by his building has bolstered his resolve.

"That kind of support is unbelievable," he says. "And I feel very strongly about this. I [have] gratitude [for] people's support. And that makes me even stronger, stronger to stand on my own feet."

Nevertheless, Lin says he's scared for his safety. In his office in the building with the mural on it, a handgun sits within reach on his desk.