Accessibility links
Held Dear In U.S., Free Speech Perplexing Abroad Protesters in the Middle East and North Africa have demanded an apology from the U.S. government over a video that denigrates the Prophet Muhammad. While even highly offensive speech is protected by U.S. law, that level of protection is quite unique, even among many Western countries. 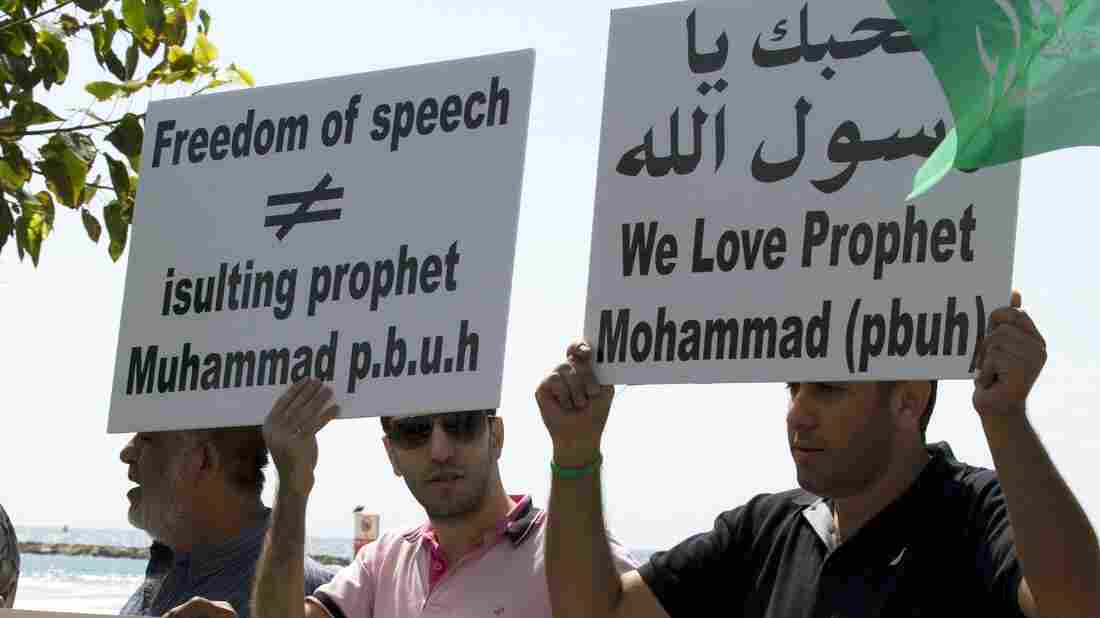 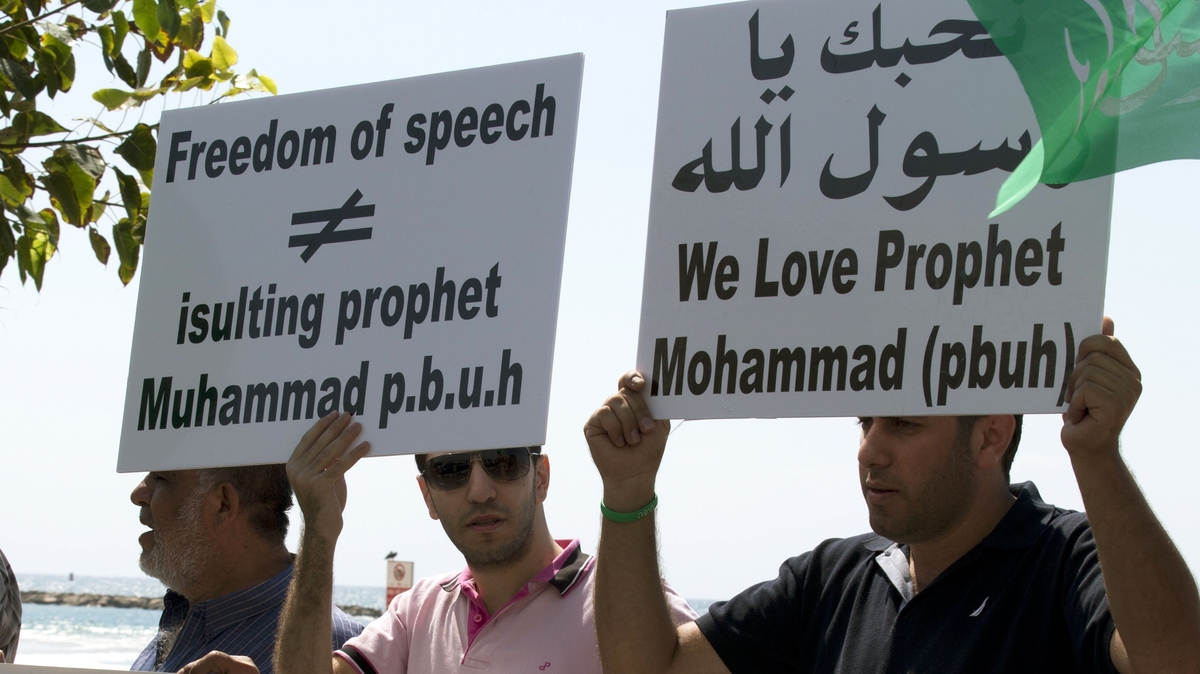 Arab-Israeli men protest a video mocking the Prophet Muhammad, in front of the U.S. Embassy in Tel Aviv, Israel, on Thursday.

The French government announced Wednesday that it will prohibit demonstrations planned for Saturday to protest the anti-Muslim video that has sparked violence in Muslim countries around the world.

Most Americans consider freedom of expression universal and self-evident. But France's decision to ban Saturday's demonstration underscores how U.S. notions of free speech are actually quite unique, even among democratic countries.

While even racially and religiously offensive material is protected in the United States, hate speech or speech that incites racial hatred is illegal in Britain, France, the Netherlands, Germany, Denmark, Belgium and other European countries. In much of Europe, Holocaust denial is specifically criminalized.

Noah Feldman, professor of international law at Harvard Law School, talks with All Things Considered host Robert Siegel about what constitutes protected speech in the U.S., and how those views are understood — and misunderstood — around the world.

On what kinds of speech are not protected under U.S. law

"You might think that an American standing in front of a crowd should be free to say whatever he wishes. And yet, the courts have always said that if it's probable and immediate and imminent that there will be violence, the police can come and shut that person down ...

On how many people abroad are perplexed by U.S. protections for freedom of expression

"I had conversations with highly educated Tunisians — people high in the government — who were genuinely astonished to discover that, under U.S. law, we couldn't ban speech like that precisely because any incitement that might occur is distant in time, distant in place and not at all certain to occur. ...

"And it's actually a problem when people elsewhere actually think, including reasonable people, that the United States government must be complicit in something like the anti-Muslim film because we haven't prohibited it."

On how U.S. notions of protected speech differ from those of other countries

"In the U.S., we value the liberty of the speaker much more highly than either the dignity of the person who feels insulted or the state's interest in trying to avoid violent protest. ...

"What's most distinctive from our perspective is that we think that if your feelings are hurt, then that's your problem. We don't believe that you ought to be protected from the hurly-burly of political insult. And that's a very deeply ingrained American notion. ...

"And because we're concerned not to allow what's called the heckler's veto, where the fact that one particular group or person will make a fuss, means that we will prohibit the speech, we've tended to be extremely permissive, and that does make us very different from other countries."

On the cultural disconnect between the U.S. and other countries on the issue of free speech

"It is a deep cycle of misunderstanding, and it should be possible both for us to say these are our values, we believe in free speech while we condemn the substance; it should also be possible for them, of course, to protest in a peaceful fashion. It doesn't forgive the violence by any stretch of the imagination."

"And so the question is whether the physical distance [between the speech and the potential violence abroad] really matters. I think probability [of violence] would have to be just as high as if you're facing a crowd, and that would be difficult to obtain in practice.

"But the idea that under some conditions we do want to limit speech because of what's about to happen — and is very likely to happen — is familiar to our law. And one could imagine that, under some circumstances, that might apply here, especially as technology brings such conversations closer and closer ...

"[Supreme Court Justice Stephen] Breyer, a couple of years ago, said publicly that perhaps we needed to think twice about that in an increasingly globalized world, and he was roundly criticized. But one might think that he was, in some sense, prescient. We may have to actually reconsider what counts as incitement in this day and age."