Accessibility links
Review: 'San Miguel,' By T.C. Boyle | Memoirs Of A Grim California Island T.C. Boyle's past work is largely satirical and tough on his characters. In San Miguel, readers will find the same biting tone, but none of the irony. Loosely based on ranchers' memoirs of a grim California island, this chillingly written novel exposes a bleak and savage reality. 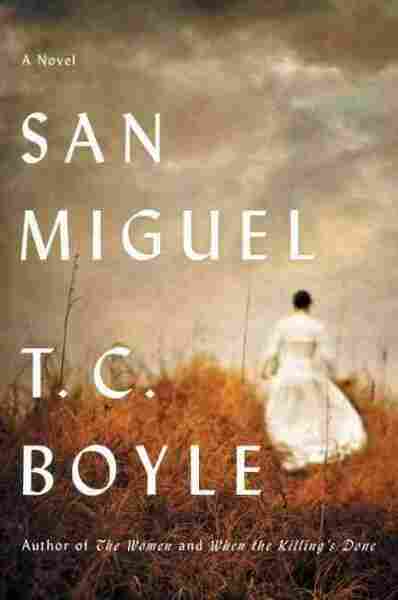 San Miguel is the name of a treeless island off the coast of California where, in the 19th and early 20th centuries, a few nervy ranchers struggled to raise sheep. San Miguel is also the name of T. Coraghessan Boyle's chilling and beautiful new novel, which is loosely based on the memoirs of those ranchers.

It is a striking departure from Boyle's past work. In 13 satirical novels, Boyle has skewered all manner of egoists and kooks, ranging from health food gurus (The Road to Wellville) and hippies (Drop City) to Alfred Kinsey (The Inner Circle). He is skewering no one here, and it takes a solid 40 pages for a longtime fan to trust that he's put away his knives for real. He has. While the prose remains as exuberant and biting as ever, he has stripped away every trace of his trademark irony to stunning effect.

T.C. Boyle's books include Drop City and The Road to Wellville.

Divided into three sections, the novel begins in the 1880s as Marantha Waters arrives on San Miguel, literally gasping for breath. Wracked by tuberculosis, she hopes that the island's "virginal air" will vanquish her disease and placate her restless husband. But from the moment she sets foot on its bleak shore, flustered and cold, ignored by her more robust companions (including her husband), she understands her folly. The grim house is drafty and water-stained, overrun with mice. A newborn lamb she tries to rescue dies a hideous death in her kitchen. Her husband proudly brings home human bones — "naked and white and fissured with age" — he finds in the sand.

The savagery of nature is all around her, but also inside her, as she huddles in the bedroom coughing up blood and "sputum that was like the gristle cut from a piece of meat." (Boyle's descriptions of consumption are unsparing.) And far from healing her, the "virginal air" haunts her sleepless nights: "The wind kept beating, keening, unholy, implacable, and it was as if it were aimed at her, and her alone. As if it had come for her. Come to blow her away across the waters and force her down beneath the waves, down and down and down to the other place, darkness eternal."

The wind has other messages for Edith, Marantha's teenaged daughter, who is the subject of the book's middle section. Edith is held captive on the island by her stepfather and "at night when she lay in her damp bed — everything damp, always damp, mold creeping over the mattress like a wet licking tongue and the walls beaded with condensation — she listened to the wind, to the distant tolling of ships bells and the fading ghostly cries of the foxes that were no bigger than a cat and her mind spun away into fantasies of escape." Imagery doesn't get much more gothic than that. Edith's schemes to flee grow ever more degrading and desperate, and if the island doesn't break her like it does her mother, it leaves an indelible mark on her character.

But just when you've decided Boyle has written a horror novel, he introduces a long, tender love story that brings the narrative to its bittersweet conclusion. In 1930, newlyweds Elise and Herbie Lester arrive on San Miguel to start their lives together. While Herbie is prone to disturbing mood swings (today it's called "manic depression"), he and Elise find peace and equilibrium on the island "set down in the heaving froth of the Pacific Ocean." While Elise's first impression of San Miguel is as wretched as Marantha's, she finds and creates loveliness in its sere landscape. She and Herbie raise two daughters here, and one of the small beauties of the novel is Boyle's depiction of a calm and happy marriage distinguished by mutual accommodation and ongoing erotic love.

All idylls must come to an end, of course, as do the Lesters'. But Boyle never suggests that they — or any of these people — deserved their fate. In the past, Boyle has moved characters around like puppets to score satirical points. In San Miguel, he sets them free.