Accessibility links
Movie Review - '17 Girls' - Teen Rebellion, Written On The Body Inspired by a real-life "pregnancy pact" story, writer-directors Delphine and Muriel Coulin explore the idea that all teens share a desire for control, but have trouble imagining outcomes and consequences.

Teen Rebellion, Written On The Body In '17 Girls'

Teen Rebellion, Written On The Body In '17 Girls' 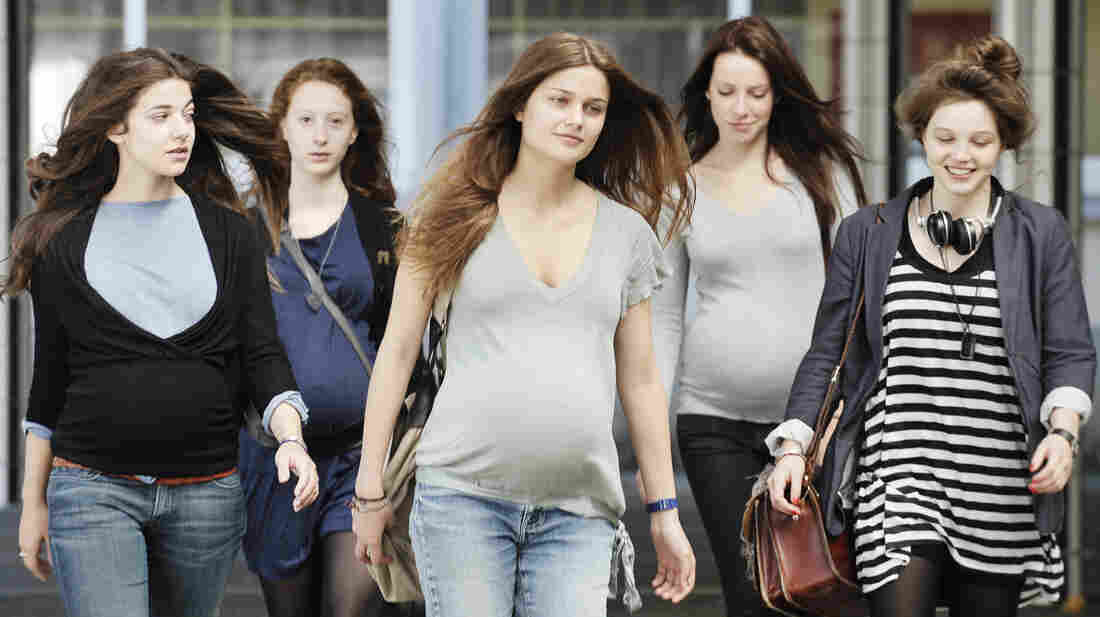 Inspired by events in Gloucester, Mass., 17 Girls focuses on a gaggle of French high schoolers who make a pregnancy pact â in large part to exercise control over their lives. Strand Releasing hide caption

The idea for 17 Girls, a woozy fever dream about a bunch of French provincial high-school girls who make a pact to get pregnant together, came from a similar, well-publicized 2008 event in Gloucester, Mass.

For all the media hullabaloo that blew out of the incident (followed by the inevitable TV movie), the reality in Gloucester was fairly mundane and not a little depressing. For starters, it's unclear whether there actually was a pact or just a pregnancy cluster in an economically depressed, heavily Catholic part of town where access to birth control was severely limited and there was little for kids to do.

Lorient, the port city in Brittany where 17 Girls is set and where co-writer-directors Delphine and Muriel Coulin grew up, shares with Gloucester a fragile economy and a breathtaking marine beauty disfigured by soulless urban planning for its less-affluent residents. Not exactly the stuff of the dreamy fantasy that shapes the movie, which filters the story through the point of view of the girls without (altogether) buying into their woozy romance. Note the qualifier.

The pact premise, which brings unexpected new meaning to the term "planned parenthood," makes for an incendiary tale. Led by Camille (Louise Grinberg), a green-eyed beauty who turns her own accidental pregnancy into a rallying call, the bevy of perfectly formed beauties who follow her into explosive fertility look more like Hamptons-baby models cavorting in a tasteful Ralph Lauren commercial than like the daughters of underemployed proles struggling to make ends meet. Blonde, red-headed, brunette — there's not a brown skin among them, despite the decidedly multiculti classmates who hover on the periphery.

In a wacked-out twist on the standard teen pregnancy narrative, the girls plot to get impregnated at a beach party, apparently the only recreation in a town without amenities beyond a down-at-heel park designed for toddlers. Following that, they will jettison the dads and their families, and create their own communal matriarchy free of adult constraints.

Bursting with fertility, most of the girls have no trouble getting pregnant. The rest, of course, is anything but smooth sailing. As things go wrong and the future begins to look less like empowerment than a repetition of their parents' humdrum survival, the girls' cocky assurance en groupe starts to wear thin, and we glimpse individual girls alone and shell shocked with their stuffed toys in their bedrooms. In the background, a hapless crew of parents, teachers and health professionals wring their hands and bicker over whether to lock the girls up, expel the instigator or install free condom dispensers in the school bathrooms.

17 Girls has a powerful and loving sense of place, expertly juggling the natural beauty of the shoreline and the lovely old houses with the hideous yellow high-rise where Camille lives with a harried single mother and her protective brother — a soldier on leave from Afghanistan who warns her, "I wanted to do something great too, but I ended up shooting at guys who have done me no harm."

Though the dialogue is riddled with instructional cliches like this, they're all true. Toggling between grim realism and floaty fantasy, the Coulins clearly mean to focus on these girls reveling in the physical power of their bodies, without negating the dangerous lunacy of their bid for autonomy. In a world where they own and control nothing, the girls want something to call their own.

Like teenagers everywhere, they can't see or think their way to consequences. The film's rhythms mimic the volatile emotional life of adolescence: the violent rushes between euphoria and despair, the overconfident contempt for adults mixed with regressive dependence when things fall apart. If 17 Girls makes you want to roll back the reel and save these mouthy rebels from themselves, it also compels you to honor their utopian impulses, their drive to rewrite their stories and replace despair with light, color and community.