Accessibility links
Movie Reviews - 'Dredd' - Nothing To 'Dredd' About A New Action Adaptation Pete Travis' new take on the British comic does justice to the story of post-apocalyptic Mega-City One and its all-powerful lawmen, the Judges. As critic Joel Arnold explains, Dredd succeeds where its 1995 predecessor didn't — by taking bold risks. (Recommended)

Nothing To 'Dredd' About A New Action Adaptation

Nothing To 'Dredd' About A New Action Adaptation 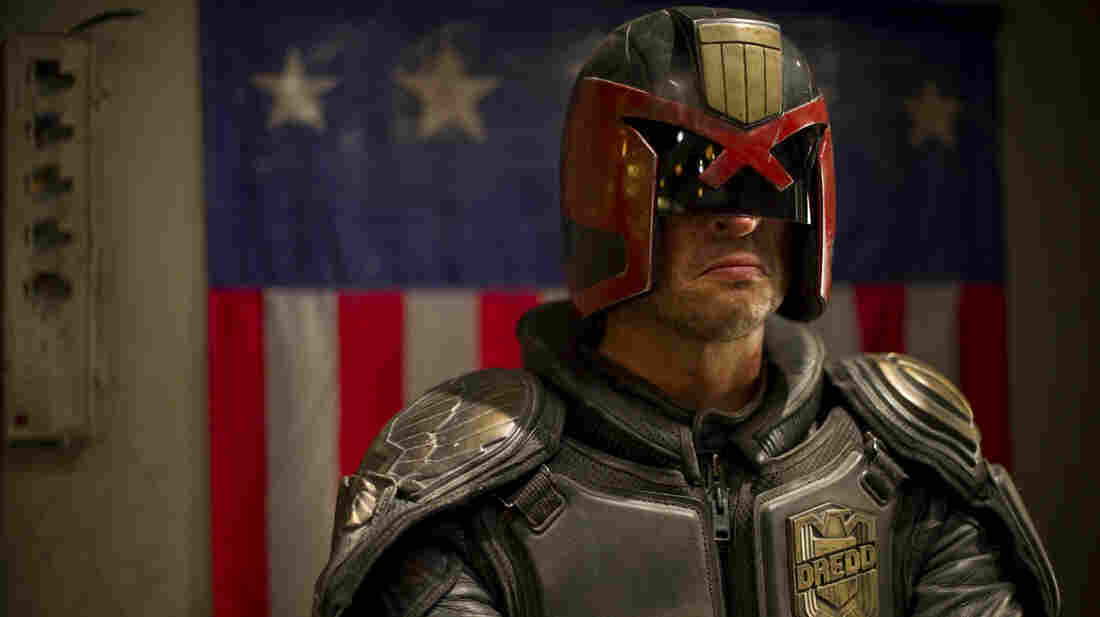 Judge Dredd (Karl Urban) is responsible for both convicting and punishing the criminals of Mega-City One. Joe Alblas/Lionsgate hide caption

Rated R for strong bloody violence, language, drug use and some sexual content

The prestige film festivals were abuzz this month with independent films and possible awards contenders, but for movies opening wide, September is traditionally a dump month — a fallow time between the summer and Oscar season when studios release films expected to underperform.

There are always exceptions to the rule, but given its vital stats, you wouldn't be faulted for casting a wary eye at Dredd, a 3-D actioner set in a ruined urban dystopia and arguably better suited to a summer release. Add to the red flags that this film is actually the second attempt at adapting the long-running British comic about a law-enforcement officer with the power of judge, jury and executioner — 1995's Judge Dredd, starring Sylvester Stallone, was a critical and financial disappointment — and the smart money would say avoid this iteration.

Forget the timing, and forget the overstuffed, schlocktastic Stallone movie. (Unless you'd like to relive some truly spectacular line readings.) Not only is Dredd a smart bit of September counterprogramming, it's a gleefully audacious, visceral, near-perfect action movie.

In Mega-City One, a vast and decaying metropolis stretching from Boston to D.C., Dredd (Karl Urban, the Bones McCoy in the latest Star Trek film) patrols the streets as a member of the Judges, a corps of individuals equally expert in combat and the law. As the last remaining political authority of a megalopolis in chaos, the Judges arrest, sentence and even execute criminals on the spot with a grim and practiced efficiency.

Dredd represents the paragon of that system, workmanlike in his relentless pursuit of justice and as unbending as the law he enforces. In an especially bloody opening that feels all too routine, Dredd pursues and dispatches a murderous criminal who, at the last minute, takes a civilian hostage.

"Negotiation's over," Dredd growls, before applying a creative solution to the problem. Stylized violence abounds that would seem a better fit for a B-movie, were each act of brutality not rendered with horrifying and at times visually stunning specificity that's only enhanced by 3-D. 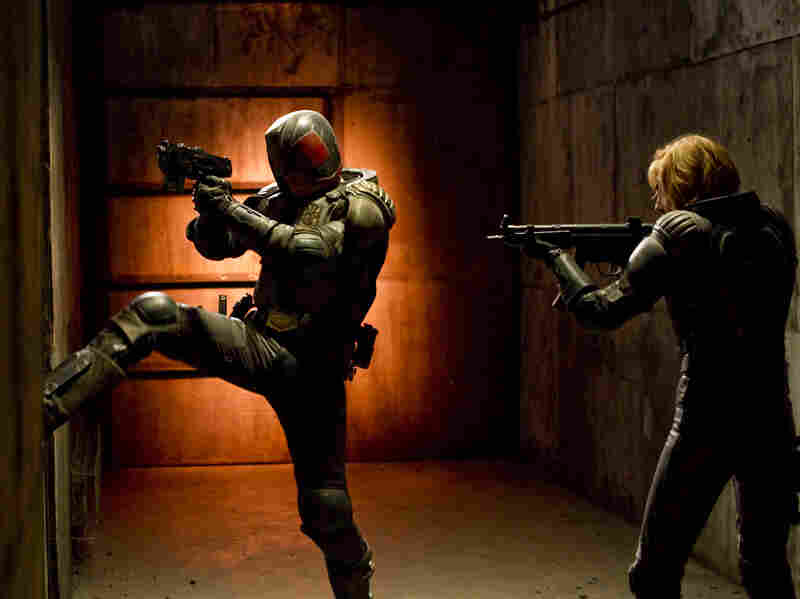 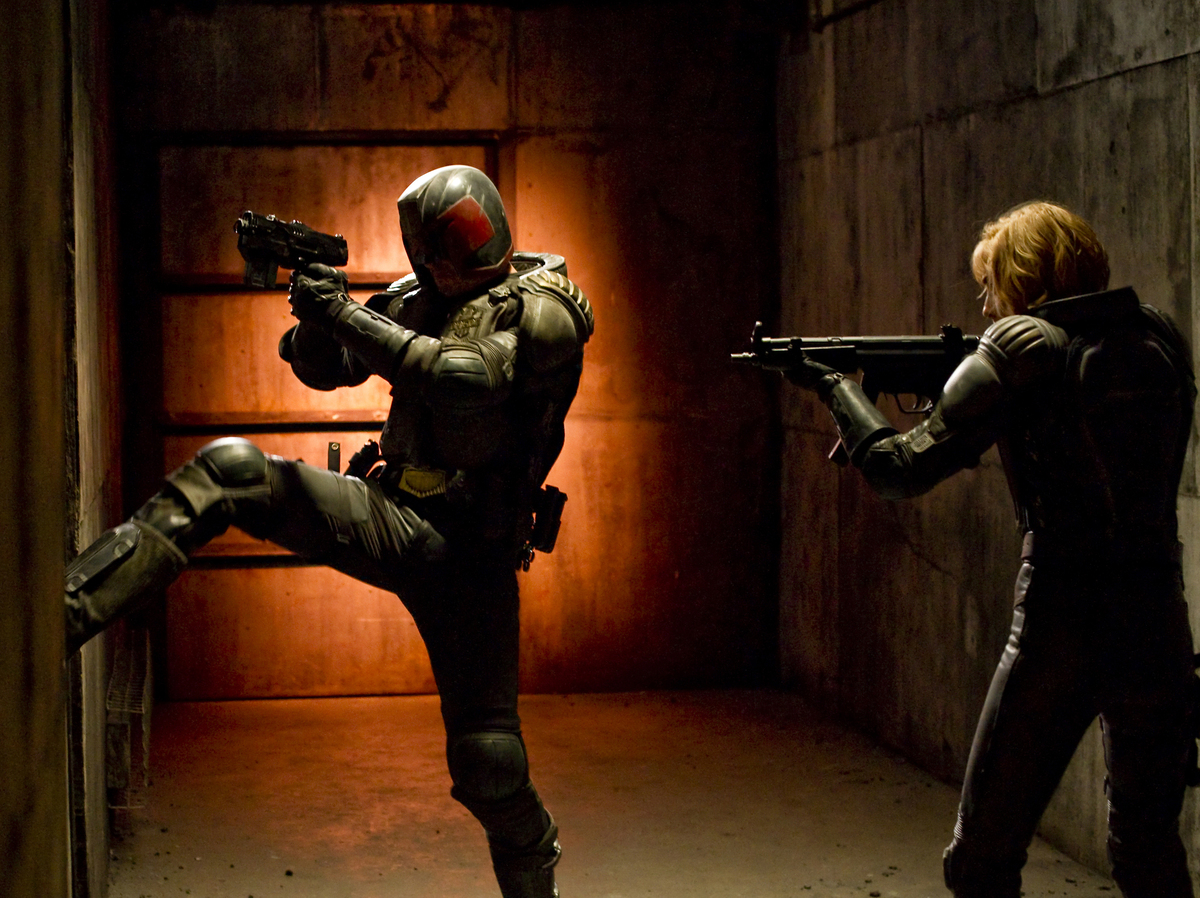 Judge Dredd and his protege, Anderson (Olivia Thirlby), fight a drug lord in a post-apocalyptic slum.

Watching an unstoppable force kick ass and deliver surprisingly effective one-liners would make for a rousing if ultimately limited experience; wisely, the film ups the stakes by pairing its merciless and impenetrable protagonist with an earnest rookie in need of evaluation. Dredd's superior asks him to ignore that Anderson (Olivia Thirlby), trained but untested in the field, didn't quite pass the necessary tests to become a Judge — the radiation on the city's outskirts has mutated her, though fortunately the result was valuable psychic powers rather than a third or fourth arm.

Writer Alex Garland, who penned the sci-fi thriller 28 Days Later and the more personal Never Let Me Go, resists the impulse to overload on fan-service mythology, instead presenting Dredd's complex and potentially overwhelming source material through the sharp lens of a day-in-the-life story.

Dredd and Anderson respond to a triple homicide at Peach Trees, one of the city's massive housing complexes, where they pick up the trail of a new drug called Slo-Mo, which makes users feel as if time is passing at a tiny fraction of its normal rate. When Peach Trees' ruthless gang boss Ma-Ma (Lena Headey) discovers them snooping around her block, she shuts down the building and invites its 75,000 inhabitants to kill the Judges if they want to go outside again.

Dredd doesn't blink at a death sentence — or if he does, the formidable helmet covering half his face doesn't show it. (The hat makes for some impressive nose-down acting from Urban.) He keeps angry and carries on, a superhero upholding society's status quo without a society left to save. That the world is crumbling around him makes little difference to Dredd — he enforces the law and continues to drill Anderson as they try to fight their way out.

While Dredd himself is mostly a conundrum, Urban brings nuance to the character, infusing him with a bestial but purposeful physicality and giving him a harsh voice that would beat Batman's to a pulp. As Anderson, Thirlby grounds the film emotionally; the stakes for her are higher than just her own life, as she experiences for the first time the realities and costs of the job.

There's a cynical way to look at Dredd, if it's successful: proof for Hollywood that eventually any property can be made to work. But that would miss the point entirely. Dredd works because it's an action flick with wide appeal that takes risks it doesn't need to — in its delightfully off-putting violence and daring style — and those choices pay off in a singular and exhilarating movie experience. It's savage, beautiful and loads of fun. (Recommended)