Accessibility links
Movie Reviews - 'End of Watch' - Hard to 'Watch,' But In The Best Way Writer-director David Ayer's foray into the world of the LAPD is just the latest in an oversaturated genre. But critic Stephanie Zacharek says End of Watch is one of a kind — and so artful in its artifice, that it almost fools you into believing that it's reality. 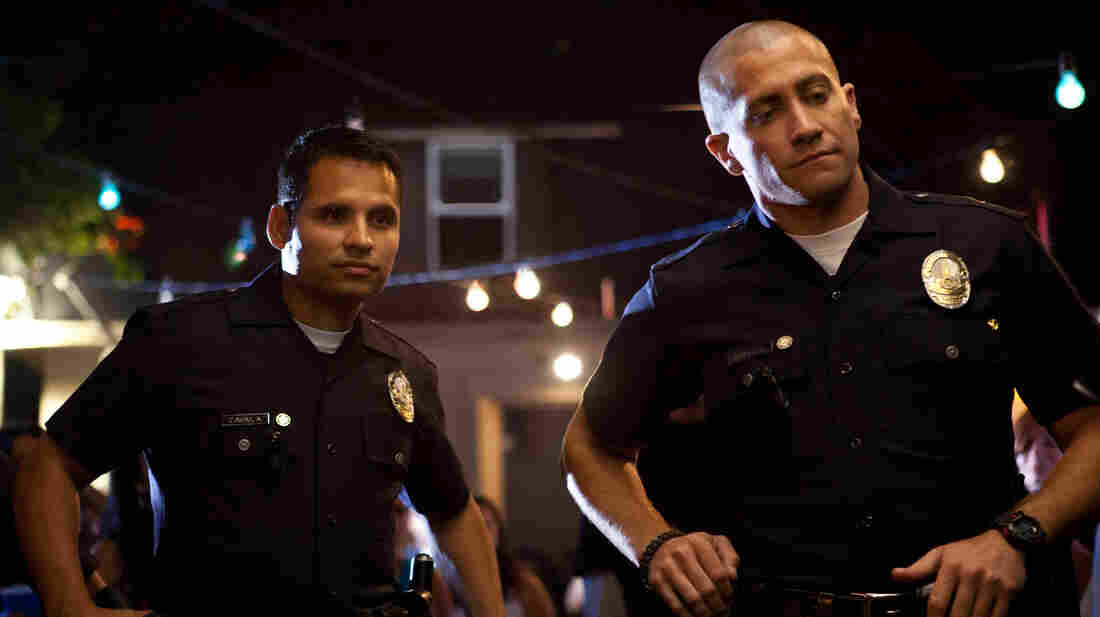 Rated R for strong violence, some disturbing images, pervasive language including sexual references, and some drug use

Cop dramas may be a dime a dozen, but David Ayer's End of Watch is one of a kind: The picture is by turns clever, compelling and unconscionable, so artful in its artifice that sometimes it almost fools you into believing that it's reality.

That's the point: This story of two young Los Angeles police officers who run afoul of a Mexican drug cartel is told through faux found footage, shot by the cops themselves as they patrol one of the roughest parts of the city. We see these guys, played by Jake Gyllenhaal and Michael Peña, horsing around in the patrol car one minute and busting down doors the next. Some of the horrors they encounter — two young children locked in a closet and bound with duct tape, a crackhead's babysitting technique — are so unsettling these young cops can barely fathom them.

Unfortunately for them, and for us, things get worse, and the scale of horror and violence escalates. Meanwhile, Gyllenhaal and Peña experience, and yak about, so many of life's pleasures and annoyances: Peña speaks glowingly of married life, and looks forward to the birth of his first child. (His wife is played, in a small but lively turn, by Natalie Martinez.)

Gyllenhaal thinks he's finally met the girl of his dreams – she's played by Anna Kendrick — and, in between cracking occasional benign off-color jokes, earnestly asks his partner for advice. These are the finest scenes in the movie, places where the actors get to build their characters layer by layer.

Gyllenhaal, with his shaven head and enormous, inquisitive eyes, looks both haunted and full of life, like a Max Beckmann charcoal drawing. Peña has the face of a Renaissance cherub, if such adorable creatures roamed the Earth wearing navy blue uniforms and carrying guns. The connection between their characters feels palpable and true.

It's the gimmickry of the technique that gets in the way, particularly as the challenges the two cops face get uglier and deadlier. Writer-director Ayer is best known as the writer of Training Day; he's also directed two features, the 2008 Street Kings (with Keanu Reeves and Forest Whitaker) and the 2005 Harsh Times (with Christian Bale). The found-footage technique gives everything a you-are-there immediacy that sometimes stretches the bounds of what's honorable for a filmmaker to show: At times Ayer rubs our noses, almost literally, in the devastating horribleness of it all.

There's nothing wrong with that, exactly, unless a filmmaker is using it for shock value. And sometimes End of Watch purports to be giving us realism when it's really trading in sensationalism. The more the camera shakes, the more we're supposed to buy the illusion that we're really out there with these guys, patrolling the streets and risking our lives.

The technique is seductive, a scarily effective approximation of living someone's reality for a few hours. What's more, the picture's big tragedy is played for the ultimate in pathos, and it's effective as heck. But it also leaves you with the feeling that maybe you've been had — that the risks these characters have taken, moviefied versions of the kinds of risks real-life cops have to face every day, have simply been put forth in the service of entertainment.

The jittery camera moves and awkward angles make it all seem so real; the novelty of it is energizing, if you can bring yourself to forget that it's also something of a betrayal.