Accessibility links
'Fiscal Cliff' Scenarios Leave Economists On Edge We've heard the warnings of a looming economic disaster if Congress fails to avert a "fiscal cliff" by the end of the year. Economists hope lawmakers will act after November's election, but what if Congress runs out of time? 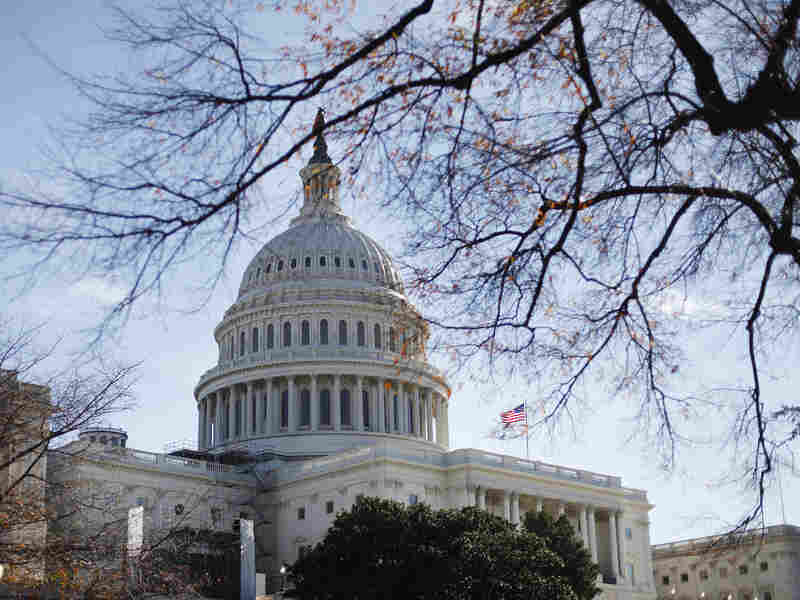 Economists hope lawmakers can avert a "fiscal cliff" after November's election, but what if Congress runs out of time? Pablo Martinez Monsivais/AP hide caption 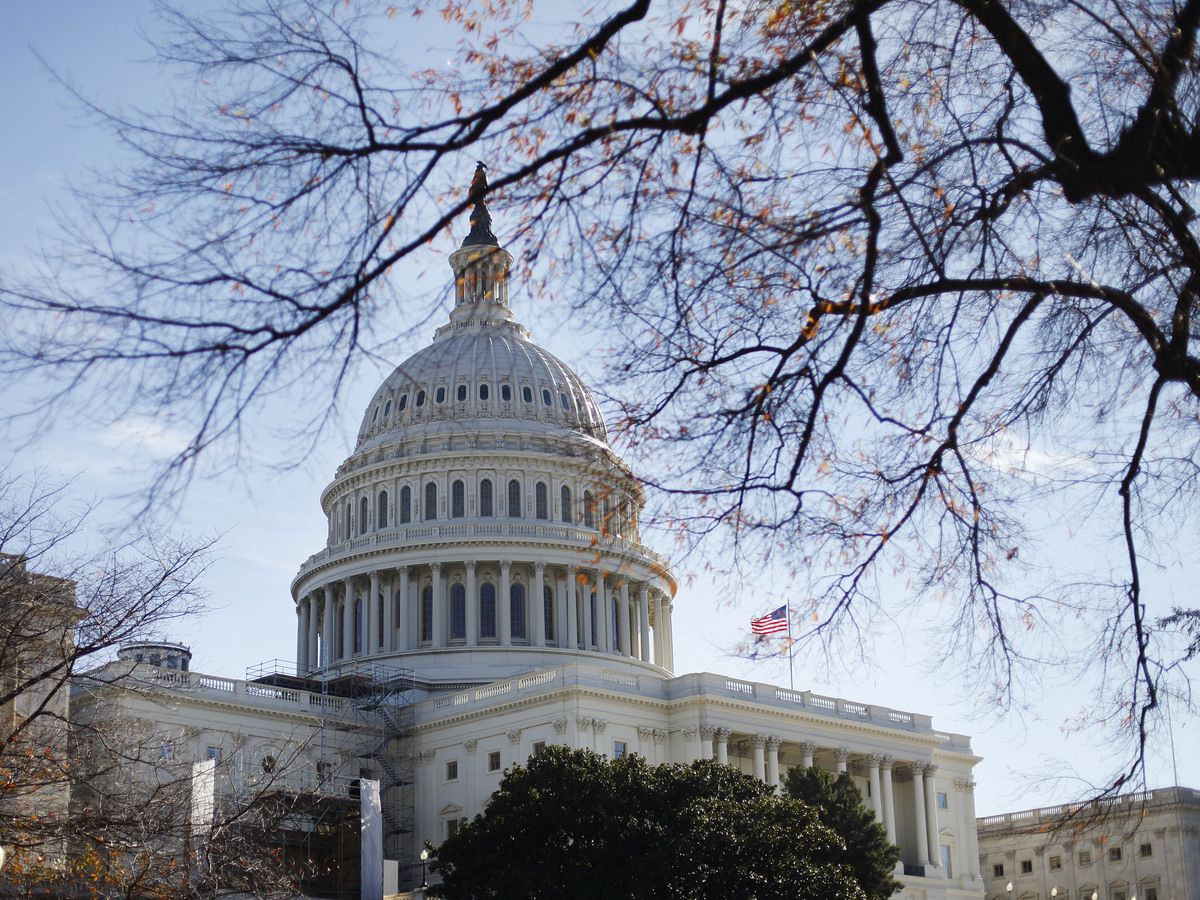 Economists hope lawmakers can avert a "fiscal cliff" after November's election, but what if Congress runs out of time?

Members of Congress are about to flee Capitol Hill, and they'll be gone until Nov. 13, one week after Election Day.

As they shift to full-time campaigning, lawmakers are leaving behind many questions about the "fiscal cliff," a massive cluster of automatic spending cuts and tax-break expirations that come together around year's end.

Economists — backed by the White House budget office, the Congressional Budget Office and Federal Reserve Chairman Ben Bernanke — warn that the country could fall into a deep recession if a fiscal cliff isn't averted.

Even if Congress has left itself enough time to swerve away from a sharp-drop cliff in December, it may be pushing the country toward a fiscal ledge, which is scary too.

Marilyn Geewax On 'Tell Me More'

Is The 'Fiscal Cliff' As Bad As It Sounds?

Is The 'Fiscal Cliff' As Bad As It Sounds?

"This is probably the greatest fiscal danger facing the economy, simply because most voters and investors don't recognize its implications," J.P. Morgan Funds Global Chief Strategist David Kelly wrote in a research paper. "Under a fiscal ledge scenario, even if the economy avoided outright recession, stocks would be negatively affected by a combination of very weak economic growth and higher taxes on dividends and capital gains."

Here's a map to help understand this precarious place, whether a cliff or a ledge:

The term "fiscal cliff" has become shorthand for a group of budget (aka fiscal) policy changes that will be coming together around Jan. 1. That's when the Bush-era tax cuts expire, automatic spending cuts of $109 billion kick in, the alternative minimum tax starts hitting more middle-class families, and other measures also take effect.

More On The Looming 'Fiscal Cliff'

The Fiscal Cliff, In Three And A Half Graphics

Congress keeps putting off the decisions that involve everything from the Pentagon budget to the expiring payroll tax holiday to cuts in Medicare payments.

Economists are unanimous in saying that unless the looming changes are stopped, softened or at least phased in, the U.S. economy could plunge — as if falling off an economic cliff.

Conventional wisdom assumes that Congress will do something constructive in a lame-duck session — the compressed legislative period that comes after an election but before a new year. Most congressional observers assume lawmakers will patch together stopgap measures, extensions and compromises — taking just enough steps to avoid a cliff until the new Congress can get seated.

But J.P. Morgan's Kelly fears the compromise efforts could create a sort of "ledge," where investors and employers will be left dangling while weighted down by new taxes, less government spending and more policy uncertainty. Even relatively small, temporary tax hikes and spending trims could prove "far too strong a dose of fiscal austerity in one year in a slow-growing economy," he wrote.

In short, Congress has left itself only enough time to organize half-measures, and even those may inflict harm.

But that's not the worst-case scenario. This is: Congress may not have time to do anything at all during the lame-duck session.

Why? Because this election season could bring major distractions, similar to those that followed the 2000 presidential election. That year's "hanging chad" drama in Florida turned into a massive time suck for political leaders. Florida officials spent weeks trying to count paper ballots to determine which presidential candidate had won that state's tie-breaking electoral votes.

Another tussle over ballots is possible this year, especially given the array of new state laws involving voter ID.

It's also possible in this tight presidential election that neither candidate may win enough electoral votes to clinch victory. Dozens of combinations of battleground-state outcomes could leave the race undecided. If no one wins, then the House would decide the election — not exactly a scenario for holding down partisanship on Capitol Hill.

And it's not just the presidential race that could spur demands for recounts. All of the House seats are up for grabs, as well as 33 Senate slots. With Congress so narrowly split, each disputed seat could inflame partisan rancor and make it harder to come up with compromises by New Year's Eve.

Given how many things may go wrong during November and December, a Goldman Sachs research note gives a 1 in 3 chance that Congress will fail to pass even short-term measures to avoid a cliff.

Economist Mark Zandi of Moody's Analytics isn't quite so gloomy. He sees only a 15 percent chance that Congress will do nothing because members know "that would be a very dark road to go down."

Zandi is calling for a slightly better-than-even chance that Congress will avoid both the quick-drop cliff and a lingering ledge by actually settling issues about taxes and spending just after the new year.

Laura Tyson, a Washington veteran who served as chairwoman of President Clinton's Council of Economic Advisers, says a handful of moderate senators already is laying the groundwork for that optimistic scenario. "Behind the scenes, there are talks going on," she said. "People are trying to put something together."

That means when Congress returns on Nov. 13, the moderates could have a framework ready to quickly pass short-term compromises — even if there were distractions amid election recounts. That behind-the-scenes work would also prepare the way for comprehensive solutions right after Jan. 1. That would keep the country off both the cliff and the ledge.

But then again, Congress' Thanksgiving break is coming up. And college football is awfully interesting in late November. Christmas shopping must get done. And fiddling takes up a lot of time, too.