Accessibility links
U.S., Libyan Versions Of Consulate Attack Diverge The Libyans say it was a premeditated strike by foreign fighters tied to al-Qaida. The Obama administration has called the attack spontaneous, staged by local extremists. For the first time, however, a U.S. official on Wednesday described the incident as "terrorism." 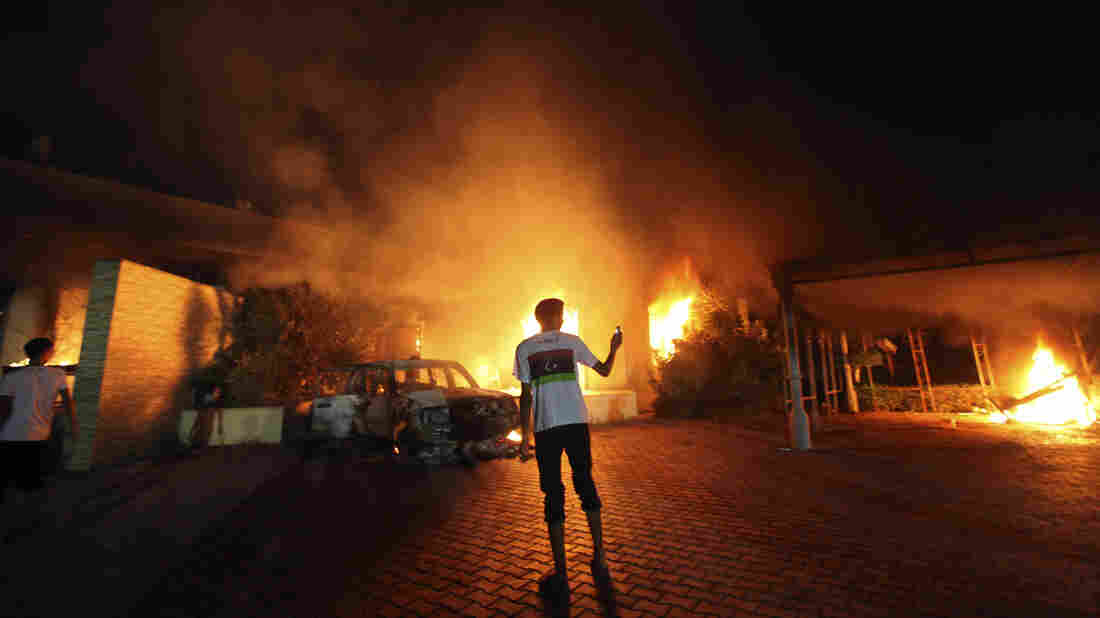 The U.S. Consulate in Benghazi, Libya, was in flames during an attack on Sept. 11. There are competing narratives on whether the attack was premeditated. Esam Omran Al-Fetori/Reuters /Landov hide caption

The attack on the U.S. consulate in Libya last week has led to dueling versions of what unfolded that night in Benghazi.

To hear the Obama administration tell it, the attack that killed Ambassador J. Christopher Stevens and three other Americans was spontaneous — and staged by local extremists who saw an opportunity to hijack peaceful demonstrations against an offensive film.

The Libyans have a different view. They say it was a premeditated strike, launched by foreign fighters with ties to al-Qaida.

The divergence in accounts was at the center of a hearing on Capitol Hill on Wednesday. For the first time, a high-ranking intelligence official described the Benghazi attack as "terrorism" and provided an on-the-record account of what the U.S. knows and doesn't know about what took place over a number of hours on Sept. 11. Also, he allowed that al-Qaida might have had some hand in what happened. This is the first official U.S. confirmation of the group's possible role.

Sen. Joseph Lieberman, I-Conn., for his part, got right to the point.

"Do we have reason to believe at this point that that terrorist attack was preplanned for Sept. 11, or did the terrorists seize the moment?" he asked Matthew Olsen, the head of the National Counterterrorism Center.

"That's a more complicated question, and one we are spending a great deal of time looking at as we speak," Olsen said. "What we don't have, at this point, is specific intelligence that there was a significant advanced planning or coordination for this attack.

"Again, we're still developing facts and still looking for any indications of substantial advanced planning. ... We just haven't seen that at this point."

Ranking member Susan Collins, a Republican from Maine, was skeptical.

"I have come to the opposite conclusion and agree with the president of Libya that this was a premeditated, planned attack that was associated with the anniversary of 9/11," she said, adding that classified briefings she had seen supported her conclusion. "I just don't think that people come to protests equipped with RPG and other heavy weapons. I think the report from the president of Libya is more likely the correct one."

Lieberman quickly sided with her, saying, "My own inclination is to agree with Sen. Collins, as I usually do, but I will await the investigation."

The Implications Of Premeditation

Whether the assault on the consulate was planned in advance is just the first of many points of contention in a tragic episode still in search of a coherent narrative.

If the plot were premeditated, the implication is stark: It means the U.S. should or could have stopped it. It would also imply that U.S. intelligence on the ground had missed something. Olsen clearly chose his words carefully when he said there weren't any indications of substantial advanced planning.

What Olsen didn't say is that a plan to attack the U.S. consulate in Benghazi wouldn't need much time for planning. There was already of climate of violence in the city. Heavily armed militias already patrolled the streets and many Islamist militias, like Ansar al-Sharia, the chief suspect in the case, were calling for Libya to impose Shariah law.

What's more, there had been at least four attacks on Western targets in Benghazi, including the U.S. consulate, since June. So it was well-known that the city is dangerous.

Olsen's answer left room for the possibility that attacking the U.S. mission could have been something that groups had in mind in a general way, but the U.S. intelligence community hasn't uncovered a definitive plan — indicating both an inclination and timing — to do so. That could explain the difference between the Libyan and U.S. narrative about that night.

Olsen also jumped into the debate over who might have been responsible.

"The picture that is emerging is one where a number of different individuals were involved, so it is not necessarily an 'either-or' proposition," he said.

When asked if al-Qaida had a hand in the attack, Olsen said that's something he would rather discuss in a closed session.

U.S. officials have confirmed that there have been communications intercepts that suggest that al-Qaida's North Africa affiliate, known as al-Qaida in the Islamic Maghreb, may have had a gossamer connection to the attack that night.

Officials say AQIM placed calls to several key leaders of Ansar al-Sharia on Sept. 11. While the group has said it had nothing to do with the attack, it has not ruled out that some of its members may have been at the consulate that night as part of the protests.

Officials are trying to determine exactly when on Sept. 11 AQIM spoke with Ansar members: Was it before the consulate attack that began around 10 p.m., or after that?

The question of timing is important because there were two separate attacks on U.S. targets in Benghazi that night — a fact that has been lost in the reports over the past week. The first attack was on the consulate. But there was another strike, more than a mile away, on a safe house where American consulate employees were hiding while they awaited evacuation from the city.

The second attack occurred at 2 a.m. U.S. officials say that attack, in which the two Navy Seals died, was much more sophisticated. It also came long enough after the first incident that it could have been quickly planned.

What isn't clear is if that second attack was a result of the AQIM phone call, goading Ansar members to action, or if the militias took it upon themselves to attack because the assault earlier that evening was so deadly. Ansar says it had nothing to do with the attack.

Olsen said investigators are following up on leads involving AQIM.