Accessibility links
Senate Race Tough To Call As Wisconsin Swings Former four-term GOP Gov. Tommy Thompson is facing off against seven-term Democratic Rep. Tammy Baldwin for an open Senate seat. With recent polls showing a Baldwin surge, one pollster says his state seems to be in the midst of an identity crisis. 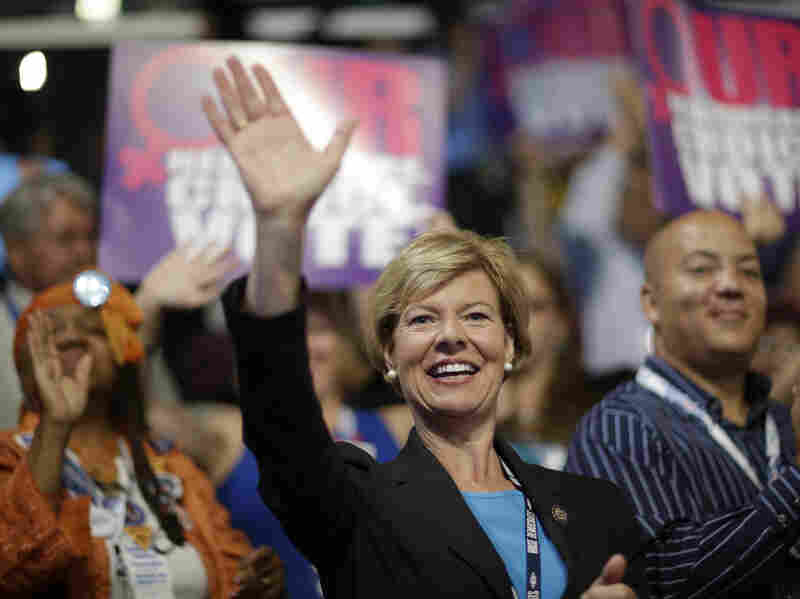 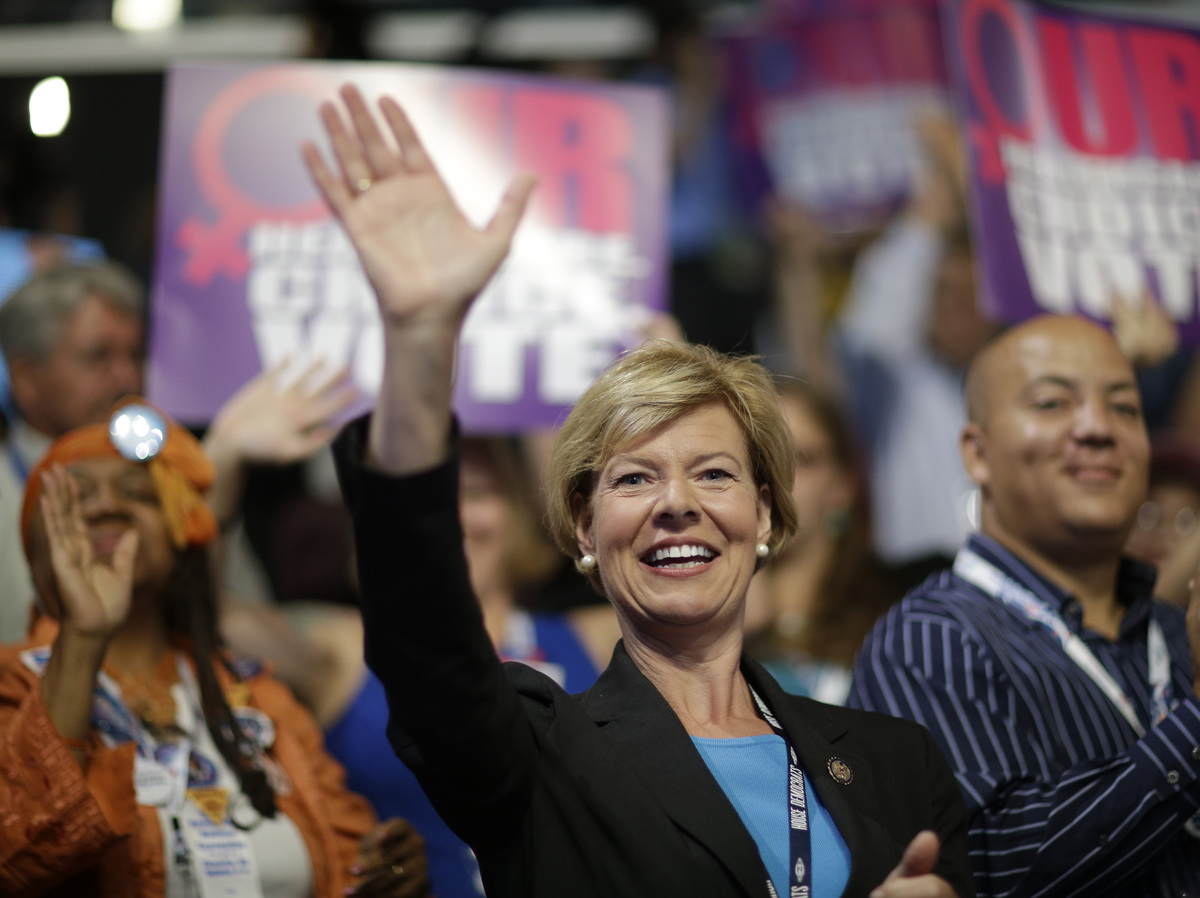 Republicans hoping to gain control of the U.S. Senate in November's elections are banking on Wisconsin where they want to flip the seat held by Democrat Herb Kohl, who's retiring.

The Republican vying for that seat is Tommy Thompson, a four-time governor of the state. He left to serve as secretary of health and human services under President George W. Bush.

Thompson's rival is seven-term Democratic Rep. Tammy Baldwin of Madison, who is among the most liberal members of Congress. If she wins, Baldwin would be the first openly gay U.S. senator.

A number of polls out this week show a Baldwin surge.

"It was exciting to see some real momentum, and I'm thrilled," Baldwin says about the poll results during a crowded lunch gathering of Rotarians in Milwaukee.

A week earlier, the Rotary Club heard from Thompson. This time, it's Baldwin's turn. Her message has threads of economic populism: The top earners should pay more in taxes. Special interests have too much power.

"The Wisconsin I know really does use fairness as its guidepost," she tells the group.

Soft-spoken in person, the 50-year-old Baldwin is portrayed as a strident, snarling liberal extremist in opposing ads. They highlight her past statements supporting a single-payer health care system.

An anti-Baldwin Republican Web video shows her raising a fist and shouting "solidarity" with union members during the huge protests that roiled the state capital last year.

When asked to respond to the charge from Thompson that she's "out of the mainstream of Wisconsin voters," Baldwin says: "I believe I'm in the finest tradition of Wisconsin progressives. And so I consider myself a fighter for the hard-working families in this state."

Wisconsin has been consistently blue in presidential elections; it hasn't voted for a Republican for president since Ronald Reagan. In 2008, Barack Obama swept the state by a whopping 14 points.

But two years ago, a Republican wave washed over this state. Republicans gained the governorship, a U.S. Senate seat and two Democratic House seats and won control of both houses of the state Legislature. And this spring, Gov. Scott Walker easily survived a recall vote.

Despite that, Baldwin says she thinks Wisconsin will swing back to the Democrats in November. As for her opponent, Thompson — who was known as a reformer, someone able to bridge party divides as governor — he has swerved to the right, she says.

"He has become somebody who disavows compromise. He signed a pledge to a D.C. lobbyist, Grover Norquist, and said on certain tax issues, he will not compromise," she says. "He told a Tea Party group: 'I'm the guy who did away with welfare, and I'll do same with Medicare and Medicaid.' You know, I think people are recognizing that I'm the candidate who is fighting for them, not for the powerful special interests in Washington."

Baldwin is hitting that theme hard in a campaign ad.

"Tommy Thompson left Wisconsin for Washington — boy, did he," it says. "Working for George Bush, Tommy cut a sweetheart deal with drug companies, making it illegal for Medicare to negotiate lower prescription drug prices. It cost taxpayers $156 billion. Then Tommy made millions working for a lobbying firm that represents drug companies." 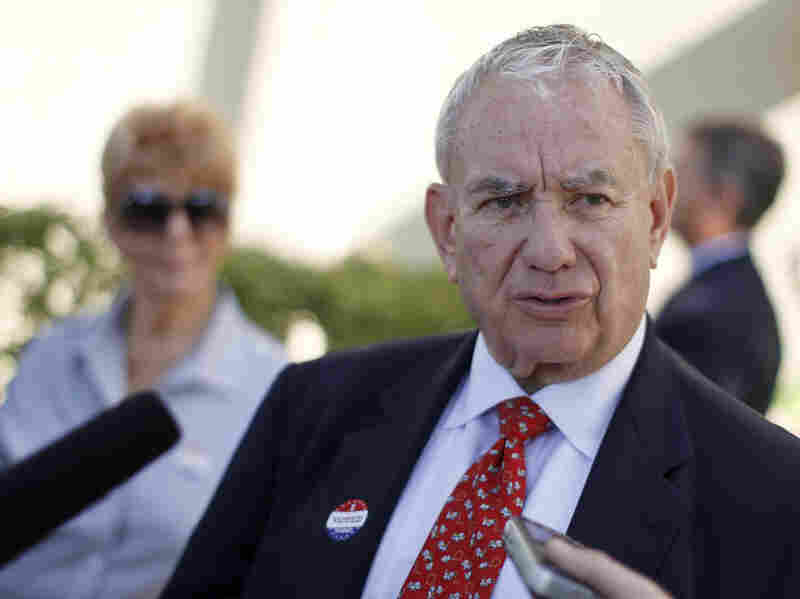 Wisconsin Senate candidate Tommy Thompson, a Republican, talks to the media after voting in the primary election on Aug. 14 in Madison. Andy Manis/AP hide caption 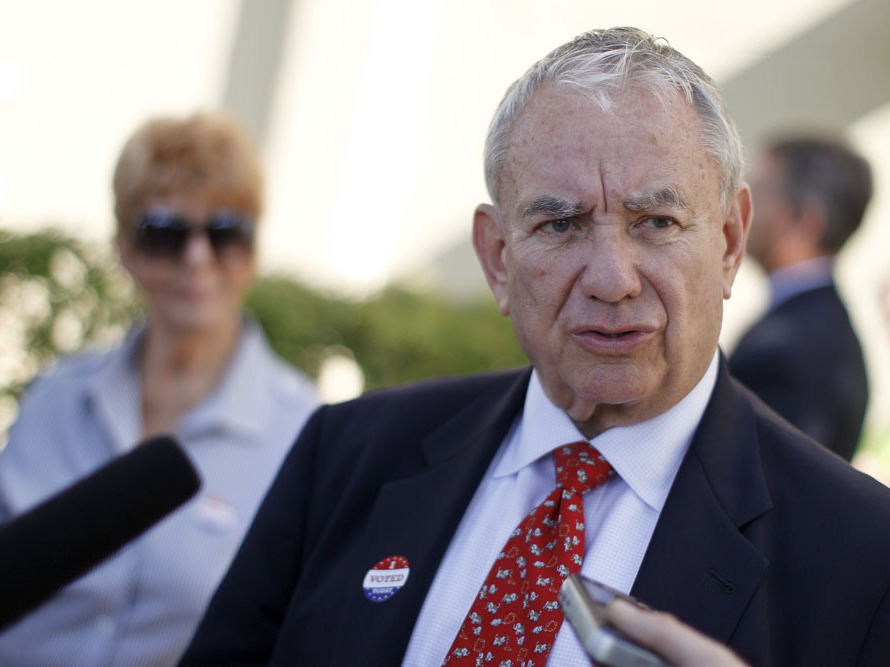 Wisconsin Senate candidate Tommy Thompson, a Republican, talks to the media after voting in the primary election on Aug. 14 in Madison.

Thompson's response? "There's an old adage that says when you don't have a case, you attack the person individually and personally. She has nothing to run on except demagoguery."

He says: "There's nobody more Wisconsin than Tommy Thompson."

"I still farm in Wisconsin. I still run and manage the family farm that's been in our family since 1861. Ninety percent of people in the state of Wisconsin know me as 'Tommy.' I'm true blue. When they cut me, it comes out cardinal red and a little bit of cheese. And that's Tommy Thompson."

Thompson served an unprecedented 14 years as Wisconsin's governor, winning his last three elections in a landslide. He drew bipartisan support and is best known for overhauling the welfare system.

Last month, at age 70, he squeaked through a bitter Republican primary, narrowly winning a four-way race.

Thompson tried to reassure leery Tea Party supporters that he is "way over on the right" and "not going to compromise." "I'll repeal Obamacare," he promised. But conservatives remained skeptical.

Now, his task is to persuade independent voters that he's on their side.

"Congresswoman Baldwin and President Barack Obama have been losing jobs all over America," he says. "It is absolutely a difference in philosophy, a difference in direction — as different as day and night. And that is what the independents in the state of Wisconsin have got a chance to vote on. They want more government regulation, they should vote for Congresswoman Baldwin. If they want less government regulation, they should vote for me.

On a visit to Milwaukee's Ludman Industries, which makes heavy machinery, the former governor tours the plant and slaps the backs of machinists. One worker has an "Impeach Obama" bumper sticker plastered on his workstation on the factory floor. He tells Thompson, "You got to take out that Tammy Baldwin."

"Send her out of town packing," he adds with a laugh.

A new ad from Thompson shows scenes of him in a factory that looks much like the Ludman plant.

"Soon you will have an important choice to make between two very different visions for America," he says in the ad. "A choice between expanding government or reforming it. My opponent supports the government takeover of health care and wants to expand government with higher taxes and more spending."

A huge amount of outside ad money is flooding into Wisconsin. Meanwhile, this week's polls show the Baldwin campaign gaining steam. One shows the race now a dead heat. Another from Marquette Law School shows Baldwin leading Thompson by 9 points among likely voters.

That's a complete reversal from a month ago, when Thompson led Baldwin by that same margin.

The poll's director, Charles Franklin, calls that 18-point shift a "wow" — though he expects the race to tighten.

Wisconsin, he says, is in the midst of an identity crisis: "Which state are we? Are we the 14-point Obama state of 2008, in which case I think on the Senate side Baldwin is very competitive? Or are we the strong Walker state of 2010 and in the recall this year, in which case it's a much stronger position for Republicans?"