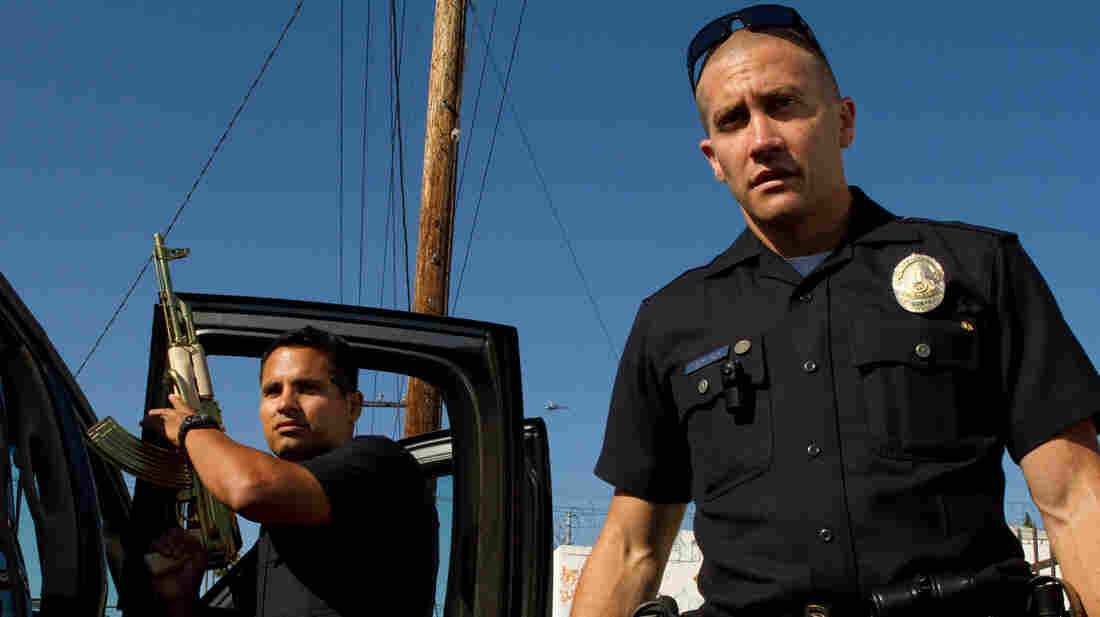 Rated R for strong violence, some disturbing images, pervasive language and some drug use

Street gangs, drugs and the Los Angeles Police Department have been ingredients in so many police thrillers that it's hard to imagine a filmmaker coming up with a fresh take — though that hasn't stopped writer-director David Ayer from trying. He's made four cops-'n'-cartels dramas since his Oscar-winning Training Day a decade ago; the latest, End of Watch, easily qualifies as the most resonant.

It begins with a tire-squealing, pedal-to-the-metal chase through South Central L.A., shot through the windshield of a police cruiser manned by officers Brian Taylor (Jake Gyllenhaal) and Mike Zavala (Michael Peña). Because Taylor's taking a film class in his time off, they travel with one extra piece of equipment in their patrol car: a camcorder — useful when the chase ends in a shootout, but still much to the annoyance of his superiors.

Still, if these cine-savvy partners don't exactly go by the book, they're good guys — good cops, dealing daily with all kinds of horrors, from missing kids to human trafficking, and somehow staying unwarped, professional and decent. This should not be a remarkable story, but in Hollywood, where cops are mostly considered interesting only when they go rogue, it kind of is.

Yes, these guys are cocky and pumped up, those badges on their chests a power trip as they strut into gang territory with guns drawn. But the badges are also a responsibility they take seriously. Taylor and Zavala are "street" in the words of one of the gang-bangers they deal with, meaning worthy of trust.

Their street cred is sufficient enough that they're even given a heads-up from a guy they've previously arrested when they cross a drug cartel that's moving into the area. Not that they listen, of course, which ratchets up the stakes in a tale that's already drum-tight with tension.

Ayer, who wrote and directed, is hardly breaking new ground here; the elements he employs are time-honored, from the Cops-style minicam footage that lets the audience ride shotgun, to the shootouts pumped up by Red Bull and coffee. Even the buddy banter that tells you these guys would lay down their lives for each other sounds familiar.

But Ayer and his cast are serving all of it up not just with the urgency the director is so good at, but with an emotional undercurrent that makes it feel remarkably authentic. End of Watch is one thriller where the adrenaline rush, considerable as it is, is almost always put in the service of character. Happily, the character on display turns out to be considerable, too.