Accessibility links
Vt. Town Hires Livestock To Save Money, Go Green Sheep and goats grazing on a hillside in Vermont: It's a pastoral image. Now, it's how one New England town is keeping the grass trimmed in its centuries-old cemeteries. And the greener lawn maintenance method is paying off. 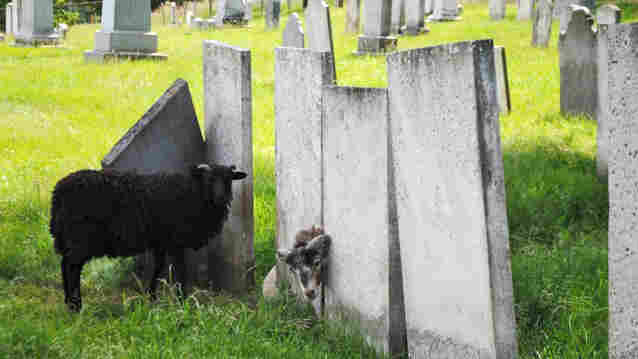 Cities and towns facing tight budgets have often neglected their cemeteries, an oversight that has left many of them in disrepair with broken fencing, crumbling gravestones, overgrown grass and persistent weeds.

But this summer, the Vermont town of Charlotte implemented a new strategy to both save money and keep grass in the town's graveyards under control, and it's a decidedly traditional way of doing it: Let goats and sheep do the work.

Stephen Brooks, who oversees two graveyards in town and smaller plots as chairman of the town's Cemetery Commission, admits it's all rather pastoral. He says it's also a financial necessity.

"Depending on the time of year, sheep and goats can chew a higher percentage or a lower percentage of what needs to be chewed down in direct proportion to how fast the grass is growing," Brooks says.

Weed-Whacking Goats Will Work For Food

He figures these wandering animals — two goats and two sheep rented from a local farmer — have reduced the need to mow and fertilize, saving the town at least $2,000 in fuel costs this year.

Before power mowers, grazing goats and sheep were one method towns used to keep the grass trimmed. In England, some towns still leave the work to the livestock.

The move has proven popular here with those who say it's good for the environment. It's also been a hit with people like Charles Russell, who simply enjoy the aesthetic of sheep and goats grazing on a Vermont hillside. Russell is a farmer and seventh-generation Vermonter who also chairs Charlotte's Board of Selectmen.

"I have ancestors that are buried in various cemeteries," he says. "I just think it's a great idea."

Russell says nearly everyone likes the idea of using goats and sheep.

"There was just this one complaint from one person out of state who didn't like the fact that the sheep were urinating and defecating on the hallowed ground," he says.

But, he points out, lawn mowers and fertilizers aren't much cleaner.

"I'd say it's not very respectful to spray gasoline and spray fumes all over the gravestones either," he says.

Many of this town's earliest settlers have been buried for hundreds of years beneath slabs of granite. Now, they also lie beneath sheep and goats grazing on a scenic hillside in the Green Mountain State.