Accessibility links
Gaza's Future Looks Even Bleaker Than Its Past The Gaza Strip will be unlivable by 2020 if nothing is done to alleviate the situation there, a recent U.N. report found. By almost every indicator, Palestinians in Gaza today are worse off than they were in the 1990s — squeezed by a high birthrate, dwindling resources and trade and travel restrictions. 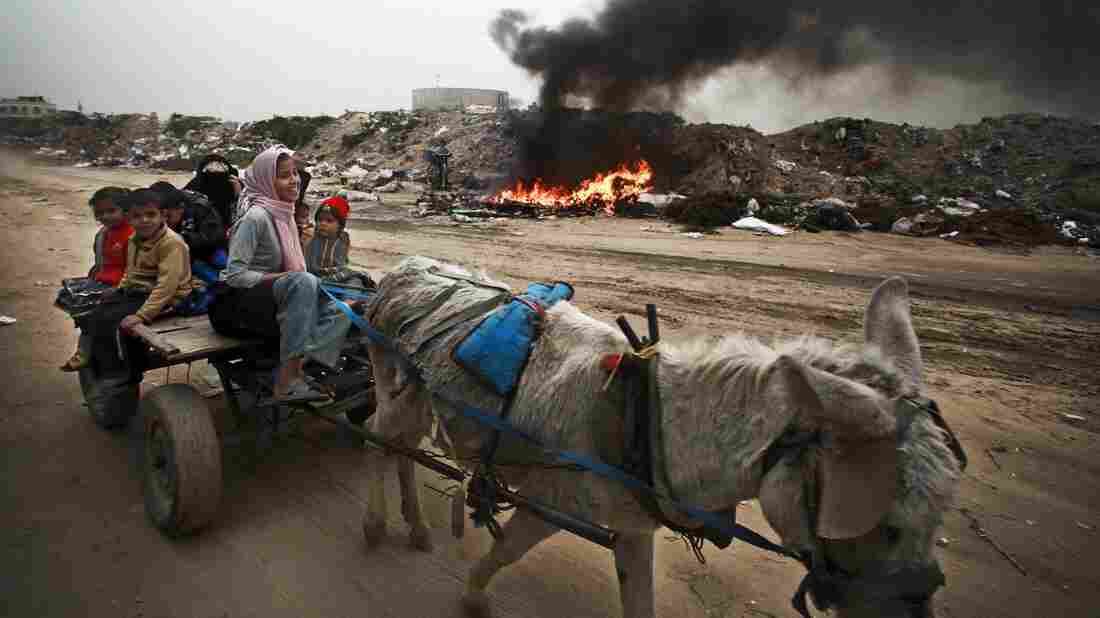 A Palestinian family rides on a donkey cart along a waste dump in Al-Nusirat, central Gaza Strip, in February. Living conditions continue to deteriorate for the 1.8 million Palestinians who reside in Gaza. Ali Ali/EPA/Landov hide caption 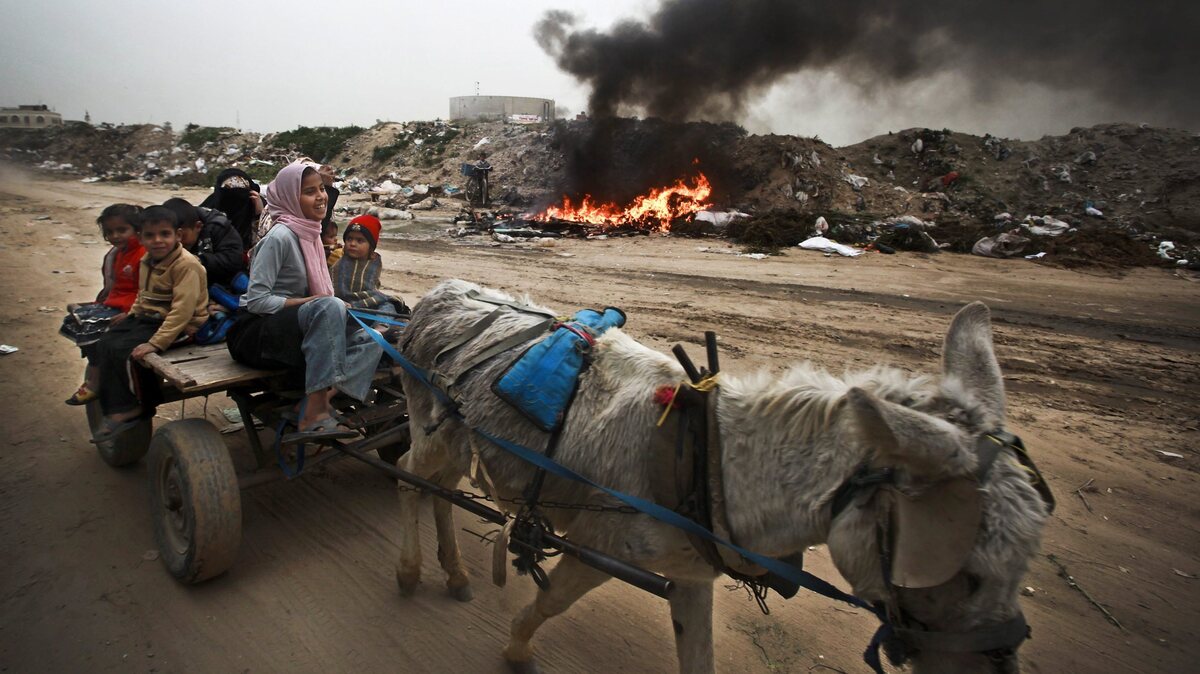 A Palestinian family rides on a donkey cart along a waste dump in Al-Nusirat, central Gaza Strip, in February. Living conditions continue to deteriorate for the 1.8 million Palestinians who reside in Gaza.

Ihab Abu Nada's family lives down a series of dark narrow alleyways in Gaza City. The house has two bedrooms for the seven people living there — the kitchen and the bathroom are in the same space, and the roof is made of tin and frequently leaks.

Still, most of the Palestinian family's income goes into paying the rent.

Gaza is facing a real environmental and health disaster in the coming years, meaning by 2016 — not even 2020 — our aquifer will be no more capable of giving us water, even saline. Then what? Gaza will not be livable.

Ihab's picture adorns a cracked wall; it's a simple memorial. Earlier this month, after being unable to find work, the 18-year-old set himself on fire and died. The family is still in mourning.

His father, Sufian, says the economic hardships in the Gaza Strip drove his son to despair.

He killed himself because of the tough situation the family lives in, Sufian says — coming home to find no water or electricity, having no place to sleep with any privacy.

It's a very difficult life, Sufian continues. He thinks this is why he did it, he says.

Gaza's statistics make grim reading. A recent report by the United Nations says the Gaza Strip will be unlivable by 2020 if nothing is done to alleviate the situation in the tiny coastal territory.

According to the report, despite a recent pickup in the economy, by almost every indicator, Palestinians in Gaza are worse off than they were in the 1990s.

Even as the infrastructure is crumbling, the population is booming. That, coupled with dwindling resources and restrictions on trade and travel by neighbors Egypt and Israel, has meant the situation for the 1.8 million Palestinians who live in Gaza is increasingly desperate.

At the maternity ward in Gaza's main hospital, the women are crowded five or six to a room. They lie listlessly on plastic mattresses with no sheets, their newborns swaddled next to them.

Gaza has one of the highest birthrates in the world and the maternity ward can barely keep up.

Ola Manousha gave birth at 6 a.m. to a daughter she named Alaa. At 10 a.m. the same day, mother and child are being sent home. Forget birth plans and postnatal care — the hospital is so busy, it can give women only a few hours' recovery time before asking them to leave.

Manousha says there are hardly any doctors to look after the patients. She says she'd rather go home as the conditions are so terrible on the maternity ward, where a stray cat roams while women in labor scream.

The hospital's deputy director, Ahmed al-Madoun, acknowledges that the delivery room is overcrowded, dirty and in urgent need of upgrade. He points to the metal tables on which the women are giving birth. They are crusted with old blood and fluid.

"We need extra facilities in the delivery room," he says.

Heading Toward Environmental And Health Disaster

And it's not only the facilities that are dire in Gaza: There is a water crisis as well.

According to the authorities in Gaza, about 95 percent of the municipal water is undrinkable by international standards, and in any case, some 60 percent of homes don't have access to potable water on a regular basis. 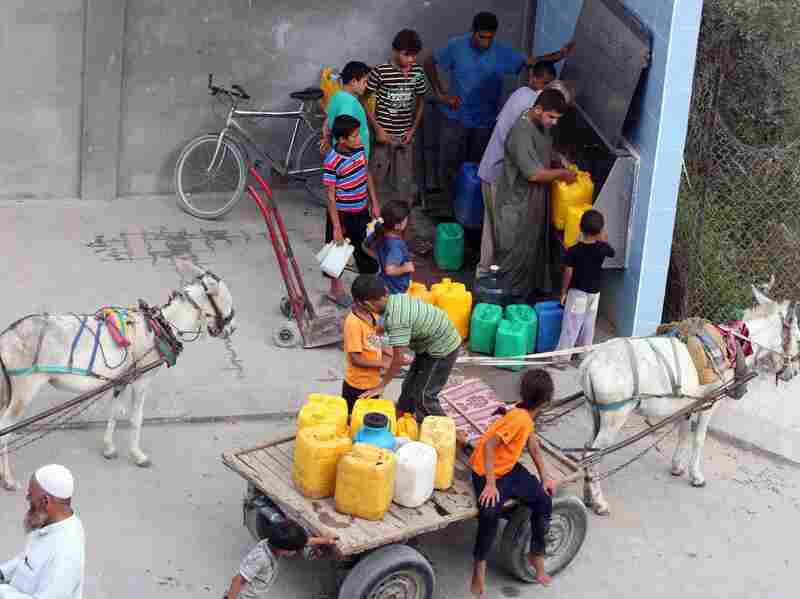 Palestinians fill their bottles with potable water at a water purification station in Deir al-Balah, central Gaza Strip, in July. About 95 percent of the municipal water is undrinkable, and only about 40 percent of homes have access to potable water on a regular basis. Ashraf Amra/APA/Landov hide caption 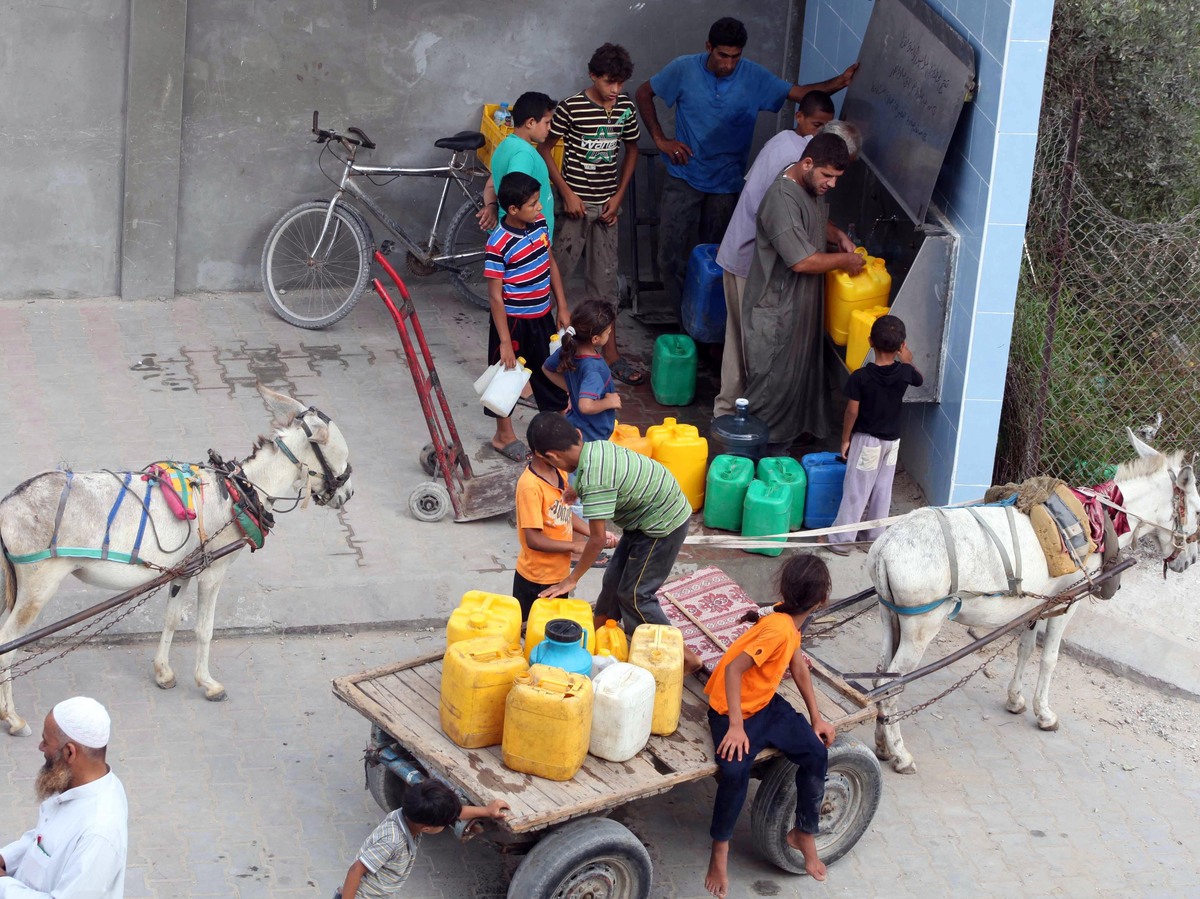 Palestinians fill their bottles with potable water at a water purification station in Deir al-Balah, central Gaza Strip, in July. About 95 percent of the municipal water is undrinkable, and only about 40 percent of homes have access to potable water on a regular basis.

Private water tankers make the rounds of Gaza City neighborhoods, and residents buy what they need to drink, cook and clean.

Monther Shoblak, who heads the water authority in Gaza, calls it a health disaster. He says the chronic electricity shortages in Gaza are only adding to the water issues.

Sewage systems, desalination plants and water pumping stations are barely working, and because there is no investment in Gaza, there are no alternatives being considered.

"Gaza is facing a real environmental and health disaster in the coming years, meaning by 2016 — not even 2020 — our aquifer will be no more capable of giving us water, even saline," Shoblak says. "Then what? Gaza will not be livable."

Industry too is stymied. According to the U.N., almost 60 percent of Gaza's youth is unemployed.

Gaza's economy has suffered particularly badly in the last five years. Israel instituted a punishing blockade on the strip after Hamas militants took over Gaza in 2007. Hamas is considered a terrorist group by Israel and the United States.

Militants launched thousand of rockets at Israeli communities, and in the winter of 2008, Israel invaded Gaza. Many homes were destroyed, and both civilians and militants were killed.

In 2010, after Israeli commandos boarded a Turkish flotilla and killed nine activists who were trying to break the blockade, Israeli restrictions on imports to Gaza from Israel were eased.

But today, Israel still stops most exports from Gaza to Israel and the West Bank. Egypt, too, has tight restrictions on trade and travel.

Kamal Ashour's textile factory shows the arc of economic activity in Gaza. Before Israel's restrictions and Hamas' takeover, he ran a thriving business that exported sweaters to Israel and the West Bank. He employed 40 people.

When Israel put its restrictions in place, his business dwindled to nothing. The factory was shuttered for years. The recent easing of imports into Gaza has meant he can now get the threads and other materials he needs to make his clothes.

But he only produces for the limited local market and now has a part-time staff of about 20 people. It's better, but he is barely making ends meet.

There is a saying in Arabic, Ashour says: What we plant in summer we eat in winter. They are just getting by, not thriving, he says.

And there is no end in sight. Israel has no plans to lift its trade embargo. There is still sporadic rocket fire on Israeli communities, and the Jewish state holds Hamas responsible.

Most people in Gaza also blame Hamas for the situation; they have seen their lives get worse under the militant group.

Hamas and its rival Fatah — which holds sway in the West Bank — have been trying to form a unity government for years. A brief and bloody civil war has left the two sides bitterly opposed to one another, and reconciliation talks have gone nowhere.

"The atmosphere is very bad, it's very negative, it is frozen," Hamad says. "The gap is still increased between both Hamas and Fatah."

"Something has to be done to help the daily life of the Palestinians in Gaza," he says. "Hamas basically is not looking north; Hamas is looking southwards towards the Egyptians."

Hamas is an offshoot of the Egyptian Muslim Brotherhood, which swept to power after the Egyptian revolution. It has asked the leadership in Egypt to open the borders for trade and travel — though so far that hasn't happened.

And so ordinary Palestinians in Gaza live in a kind of suspended animation: hoping things will get better despite predictions that they will get worse, and waiting for others to determine their fate.