Accessibility links
Grizzly Bear On Candor, Democracy And Too Much Music The Brooklyn band talks about its division of labor and how to break through the indie ceiling. 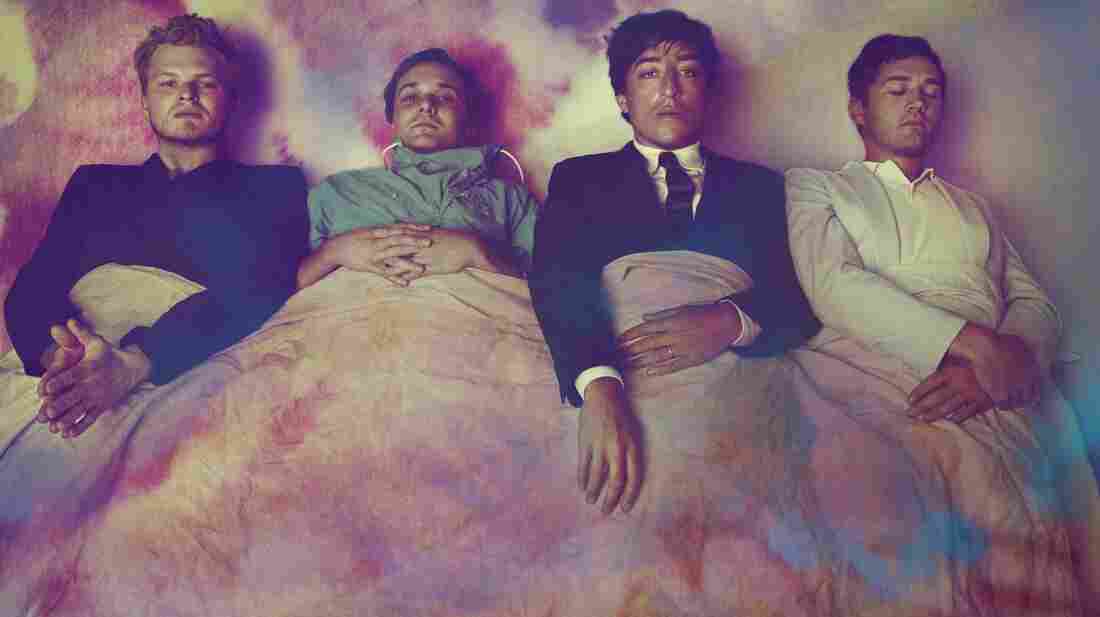 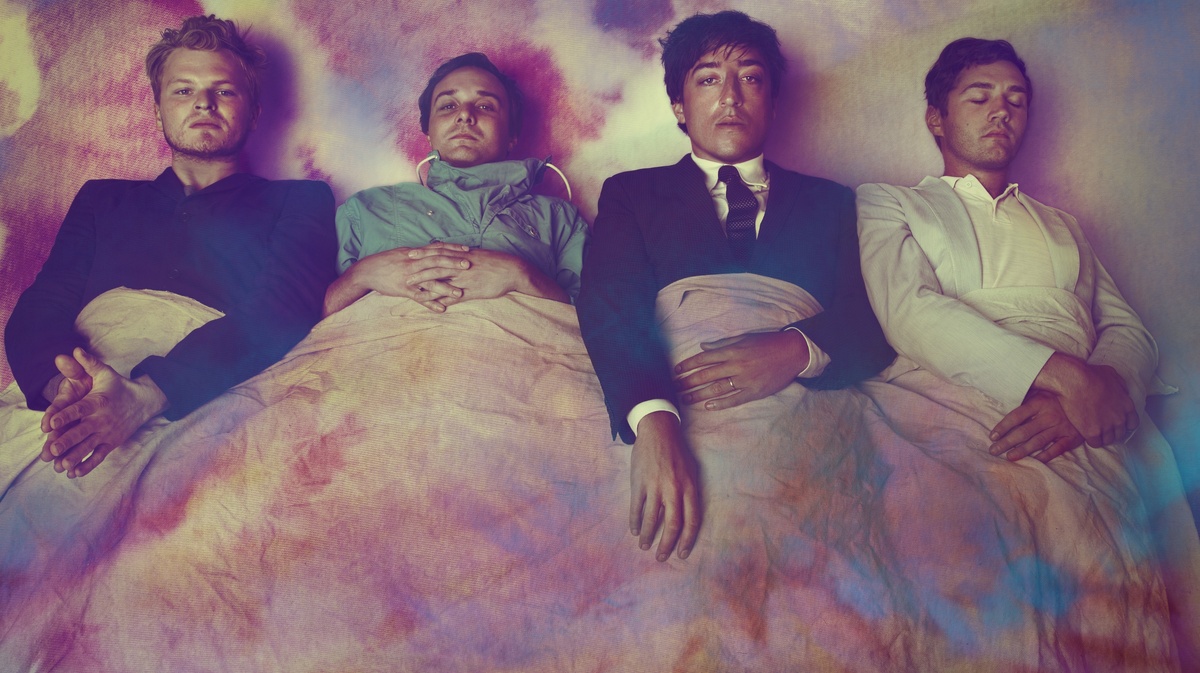 Tom Hines/Courtesy of the artist

Grizzly Bear, which has just released its fourth studio album, Shields, spoke to Morning Edition host David Greene about democracy within the band, censorship and candor in interviews, and achieving success as an indie band. Hear the radio version at the audio link and read part of their conversation below.

On division of labor in Grizzly Bear

Daniel Rossen: "The ultimate goal for us is always to make an album that all four of us love and are excited about, which is one of the biggest challenges of all. We're not even thinking about the world or how it's going to be received or if the fans are going to like it. If the four of us can agree on it, then, mission accomplished.

"The beginning of 'Sun In Your Eyes' — sometimes I would just ask Ed to go to the piano and just play whatever he thought of. One of the very first riffs of that song was something that he just went and played at the piano, those first few notes. I recorded it and, over the course of a few weeks, started playing with it and then wrote a melody to it. And then Chris Bear played these kind of strange jazz chords at one point, and I went over and recorded those. Then we incorporated that into the middle of the song.

"It just kind of kept developing. And then Chris Taylor took it for months. We didn't even think it was going to turn into anything, but Chris kept chipping away at it and adding bits here and there. It took like six months for it to become something real, but by the end, it was the kind of song no one of us could ever have conceived on our own. I would never have sung over a track like that on my own. It was just really thrilling in that way where it almost felt like listening to somebody else's music rather than making your own record, which is kind of the best thing about having a band that's so democratic. That's the greatest goal, maybe."

On candor in interviews

Edward Droste: "I'm not going to lie, I feel like I sometimes have to censor myself in interviews. I can't quite fully be honest about how I feel about certain things because it can be taken out of context. People love a juicy quote, they love a headline, and they love to twist things and make it seem like it's something bigger than it is.

"I guess I would consider myself an opinionated person, and it just doesn't benefit to — I could just be, like, a really outspoken person and go for gold and just say a lot of things that are controversial, but I kind of feel like at this point, it's best not to. Not to be boring — there's plenty of interesting things to talk about that doesn't have to get into things that people are going to latch onto and retweet or blog a million times. There's an element to that. I definitely felt like there was a sort of freedom in the early times where it was like, 'No one's going to read this, so maybe the 20 people that do will get a kick out of it.' "

On making a living

Chris Taylor: "Now, an indie band doesn't really make much money selling records, so you have to be on tour a lot. And we're on tour, like, a lot. Talk about connection with your loved ones or your friends or romantic relationships or your family — it's pretty crazy how much we have to be away from home.

"And that is just in order to make a living — to promote the record and go on tour and play shows and have an income from working really hard on something. I think musicians deserve to — if they've worked hard, they should see some sort of remuneration for their efforts like everyone else who goes to work at their job. I guess if everyone was buying records, maybe indie bands wouldn't have to tour as much. Who's to say?

"I think the download scenario that we're in the middle of is kind of hopefully still a work in progress and the final model hasn't been realized, because at the moment things like Spotify are actually pretty harmful to musicians. The only people who really benefit is the company Spotify itself and large record labels. Not independent [labels] but, you know, Columbia Records, Sony. So things like Spotify, although they expose people to music, it doesn't really do anything effectively for the band unless that person decides to buy a ticket to your show.

"In order to make a living, all I know for us is that we have to go on tour. You won't really sell records if you don't tour. And also, you don't really make a lot of money selling records just because people just take them."

Droste: "You can get a record and legally buy it for sometimes as low as six or seven dollars. I'm like, that is some mozzarella sticks at your local diner. Two years of work making an album, and seven dollars is not a big deal.

"I do feel like there's a ceiling that independent artists hit, and the only way past it is radio — commercial radio. It's not like that's our aspiration. We don't write music with that intention at all. You shouldn't have to, but that is how one reaches people that aren't as curious and going online looking for new music."

On the surfeit of music on the Internet

Droste: "There's way more bands, first of all. That's 'cause of the Internet, which I think is a great thing because that means people get exposed to way more music. The traditional channels of media that I remember growing up with were very selective with what I could hear, like the radio or MTV. So I was funneled certain music, and I didn't learn about a lot of different music. People can still turn to blogs or websites and discover music and stream it and hear it and test it out much more than before, so in that sense it's really helpful.

"I don't think we'd be where we are pre-Internet. So, it's like push and pull again, where you're, like, very grateful and then at the same time you're like, 'Hey, y'all, just buy the albums.' "

Taylor: "I don't know if I even believe this, but just to pose as devil's advocate: There's also that buffet situation where there's turkey and chicken and fish and steak and you can decide what you want to eat. There's like eight kinds of vegetables. And none of it is really that good. Maybe the turkey is the best thing there. Maybe the house salad is safe, so that's what you end up with. Or you go for gold and you just try all of them. You don't really remember what you ate but you feel sick.

"It's a way you could look at it. There's an oversaturation of just everyone like, 'I'm going to start a band.' For me it can be a little overwhelming. And I run a record label, so it's my job to sift through things like this. There's an argument too that it's so easy to get something out there, and anyone can make an album with their laptop. I love punk music and I love how off the cuff it is, and that's an expression and that's amazing. But then there's also just, like, taking time on something as well is also a good thing."