Accessibility links
A Dull Night At The Emmys, But A Big One For 'Homeland' And 'Modern Family' A night of mostly expected winners and lackluster production made for a boring Emmys telecast.

A Dull Night At The Emmys, But A Big One For 'Homeland' And 'Modern Family'

A Dull Night At The Emmys, But A Big One For 'Homeland' And 'Modern Family' 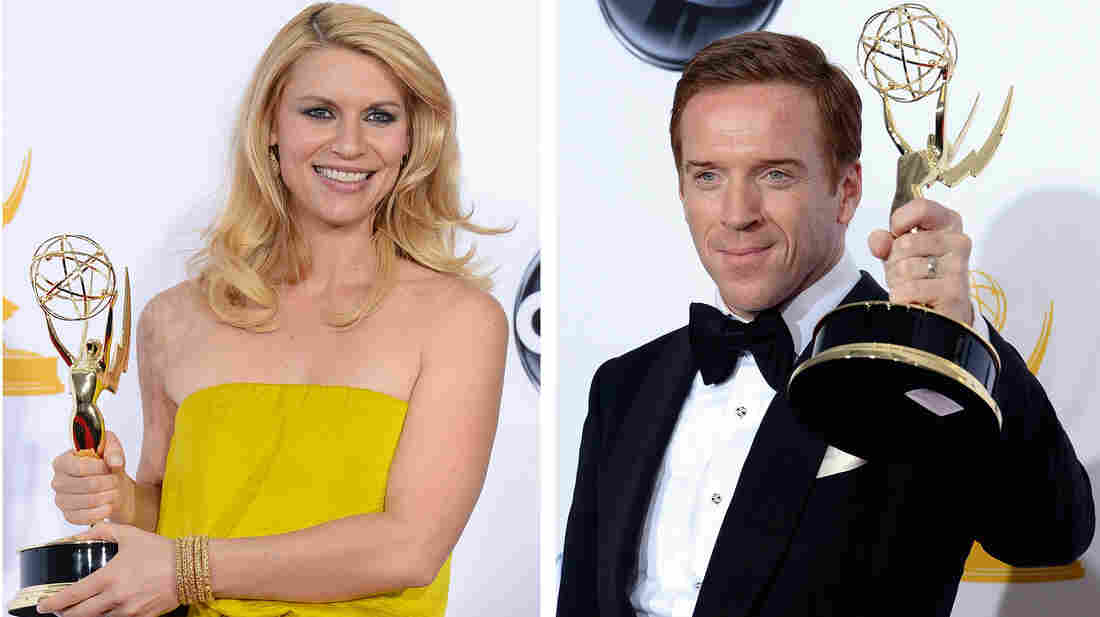 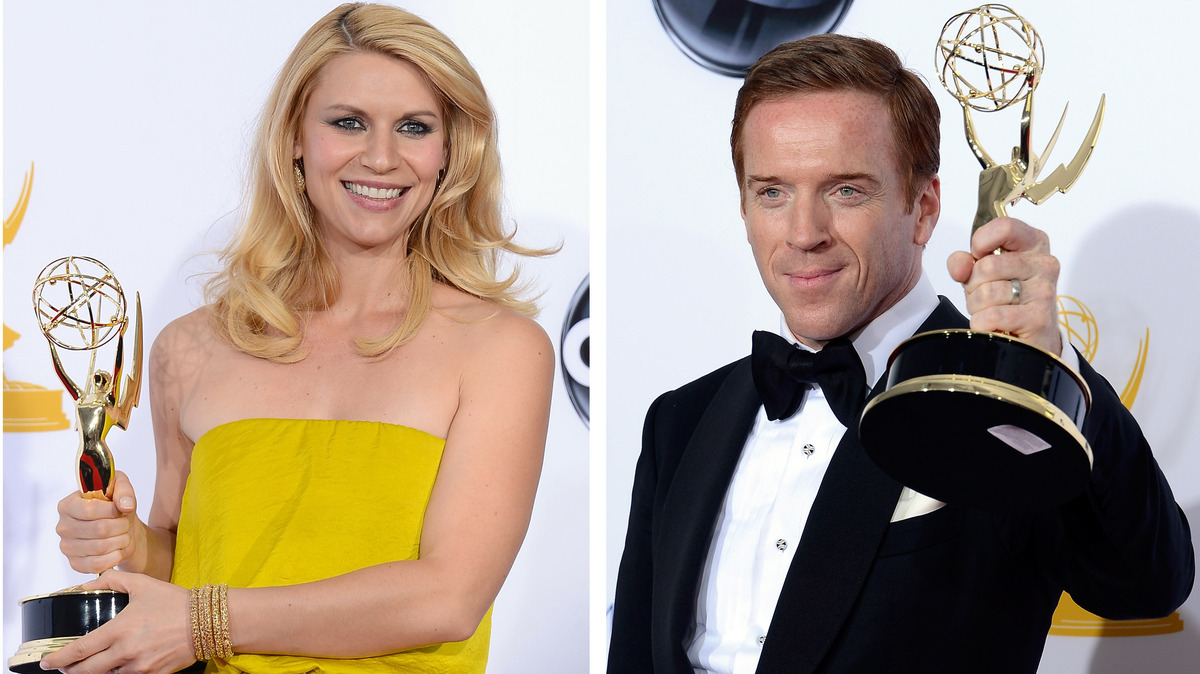 Claire Danes and Damian Lewis hold up their Emmy Awards for Showtime's Homeland.

Let us say this first: As an actual determination of the utmost merit in television, the Emmy Awards are ridiculous and have been ridiculous for quite some time. Naming shows that the Emmys failed to take seriously is easy: The Wire, Buffy the Vampire Slayer, most of the run of Friday Night Lights and so forth. If you look to the Emmys to actually anoint the best show or the best performance, you will bawl your eyes out over and over, and also, anyone who watches very much television will make fun of you as a rube and a dupe. Is that blunt enough?

What the Emmys can do — but only sometimes actually do — is simply provide an opportunity to recognize and reward some of the good work that's being done, and give people who like good TV a night they can enjoy and a chance to hear about some shows they might not be watching that might be worth trying. That's it. It's really just a big party where a bunch of people you don't know throw out some compliments.

Uninspiring winners and a lackluster show made for an evening that ultimately didn't do justice to how much good television there is right now.

Once you realize that the award itself is pretty silly and about as relevant to your life as the Pillsbury Bake-Off, your enjoyment of the Emmys comes down to how you feel about the messages sent by the somewhat whimsical decisions to honor this show over that one, this performance instead of that one. Some of it is impossible to take at all seriously — last night's Writing for a Variety Special category lined up a Louis C.K. standup show against the Kennedy Center Honors, which is a little like holding a series of Lincoln-Douglas debates between a cat and a tomato. You can put them in the same arena and you can declare a winner, but they're really not in competition with each other in any meaningful way.

But the show on Sunday night? That was just not a very good show.

The 2012 Emmys made one arguably surprising set of choices: They brought an end to Mad Men's four-year winning streak as Outstanding Drama Series, as Showtime's Homeland grabbed the title. But if that headline makes it appear that change was in the air, don't be misled: For the most part, it was a very big night for inertia. The combination of a lot of expected and uninspiring winners and a lackluster show made for an evening that ultimately didn't do justice to how much good television there is right now.

Particularly in the world of comedy, the Academy played it discouragingly safe. The third straight Outstanding Comedy Series win for Modern Family wasn't unexpected, but that's a show that's been striking the same notes since its first season. It's awfully hard to justify giving it all the attention and shutting out everything else: other amiable hits like The Big Bang Theory, other offbeat network fare like Parks and Recreation (which wasn't even nominated), and other cable efforts like Girls and Veep. There's nothing wrong with Modern Family, but there's nothing that makes it a persuasive creative juggernaut, either.

Modern Family also won the Outstanding Supporting Actor and Actress awards on the comedy side, for Eric Stonestreet (Cam) and Julie Bowen (Claire). They've both won before, and they're both good at what they do, but comedy is stuffed with great supporting performances — you could almost stock a whole slate from Parks and Rec alone — and to ignore them all seems like a symptom of inattention in the direction of comic actors.

Probably only because everybody from Modern Family submits in the supporting categories, nobody from that show was eligible in the lead categories, which left an opportunity for other people to get a foot in the door. Unfortunately for any sense of excitement, the feet that made it through the door belonged to perennial Emmy faces as well. Jon Cryer, who won for Two and a Half Men after bumping himself up from supporting to lead in the post-Charlie Sheen era, was the only pick of the night that seemed to draw actual derision. Cryer is fine on that show, and the show is still popular, but seeing him win over, for instance, what Louis C.K. is doing on Louie just seemed a little silly.

On the women's side, in a vacuum, Julia Louis-Dreyfus winning for Veep is an absolutely solid choice: It was a very good performance, it's a new performance to honor, and it's a really good show with a terrific pedigree. But Louis-Dreyfus has been nominated over and over (and over), and unfortunately, in the context of an evening of such safe choices, it looked like she might have won not for her strong performance on this show, but because people who don't watch very much comedy on television recognize her and know they like her. (I picture people saying, "I didn't really watch that, but she's greeeeeat.")

The drama side at least brought a new dominant show: Homeland, which took not only the lead actress award that Claire Danes was very much expected to win, but the Outstanding Drama Series award that it was not expected to win, and a lead actor prize for Damian Lewis that was widely thought to be a battle between three-time winner Bryan Cranston (of Breaking Bad) and never-winner Jon Hamm (of Mad Men). Lewis' win says, perhaps even more firmly than the Outstanding Drama Series prize, that this was the year of Homeland. (It was also a huge year for Showtime, which had never had a lead actor or a series come out on top.)

This season of Mad Men was more divisive than most — whether you liked it depended a lot on whether you cared about Don Draper's new wife, Megan (Jessica Pare), who essentially became the show's second lead instead of Elisabeth Moss, and whether you bought the arc of Joan (Christina Hendricks). It's possible the show's being knocked off its perch had nothing to do with any flagging enthusiasm — there are certainly those who think it was an especially strong season — but it will be interesting to see whether it's still The Megan Show when it returns.

The supporting prizes in drama went to Aaron Paul, who beat out a strong field including Giancarlo Esposito, whose Breaking role had been handicapped as most likely to succeed; and Maggie Smith, who nabbed Downton Abbey's one big prize and kept Mad Men's streak of no acting wins alive in a year when many suspected Hendricks might have a good shot at breaking it.

The variety, reality, and miniseries/movie categories were equally ho-hum: The Daily Show won for the 10th time, The Amazing Race won for the ninth time, and Game Change from HBO won, as had Recount, the network's previous movie about American politics from the same writer, Danny Strong.

All in all, with the exception of those Homeland wins, it could almost have been put together from a clip reel of previous Emmy ceremonies. (Even in the case of Homeland, there were big moments for Danes, who made the awards circuit a couple of years ago for playing Temple Grandin, and for producers Howard Gordon and Alex Gansa, who previously won for 24.)

Logically, there is no particular reason why what won before should not or cannot win again. If every year is a clean slate, then maybe it only makes sense that last year's winner is likely to be a strong contender for this year's award if he or she is making the same show or playing the same character. But not all repeat winners are alike. When Cranston won three times in a row for Breaking Bad, the griping was considerably quieter, because Cranston's role was evolving so much that it genuinely felt like he was doing different work. Is Stonestreet — who, again, is very good at what he does — doing something particularly new playing Cam now as opposed to playing Cam two years ago when he won last time?

Perhaps the biggest problem with the show Sunday night was that it leaned heavily on the winners because the rest of the production was so lackluster. (Last year's awards were also pretty boring, but great winners like Melissa McCarthy, Kyle Chandler and Margo Martindale did a lot to elevate it.) Host Jimmy Kimmel is a funny guy, but he never found his rhythm. He opened with a joke about how stupid the Emmys are, which is something awards-show hosts often think they should do in an effort to be daring, but which is something good awards-show hosts generally don't do. Furthermore, far too much of Kimmel's shtick was about himself, including the opener and a one-joke bit with Josh Groban that was fairly short but felt endless.

It just wasn't ... fun. Great awards shows, like any of the Neil Patrick Harris Tony Awards or the Jimmy Fallon Emmy Awards, are supposed to be fun, not cool. A room full of people in pricey jewelry handing compliments to each other will never, ever be cool, no matter how much anyone may try to distance himself from it. Jon Stewart made fun of the predictability of his award, but he still took it. Jon Cryer said he didn't deserve it, but he still took it. This will never be cool, ever. The best thing it can be is fun, and when they keep going round and round with the same winners, it's not that much fun.