Accessibility links
Nation: The Problem With "Muslim Rage" The attack on the American embassy in Benghazi was linked to the trailer for an amateur anti-Islam film that originated in the U.S. But the editors of The Nation argue that the true cause was not the film, but years of resentment stemming from American policy in the Middle East.

Nation: The Problem With "Muslim Rage"

Nation: The Problem With "Muslim Rage" 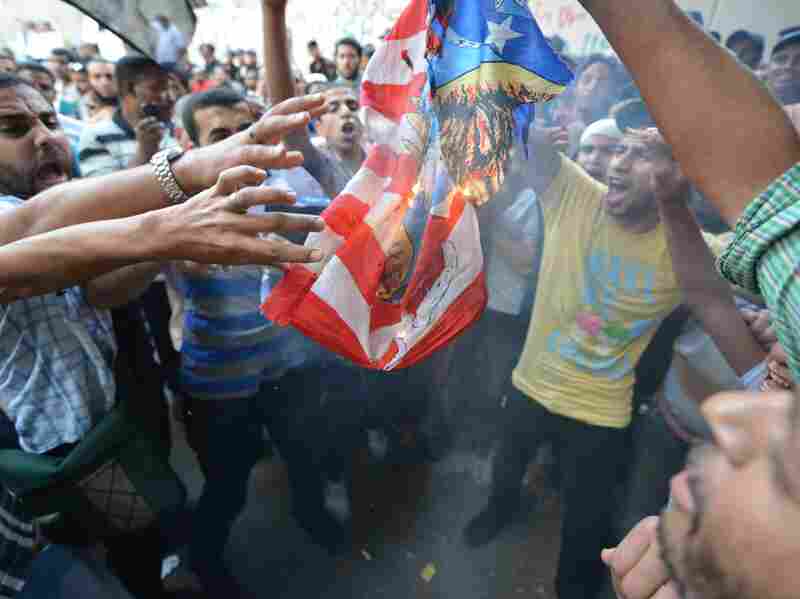 Egyptian protesters burn the US flag during a demonstration against a film deemed offensive to Islam on September 12, 2012 outside the US embassy in Cairo. Khaled Desouki/Getty Images hide caption 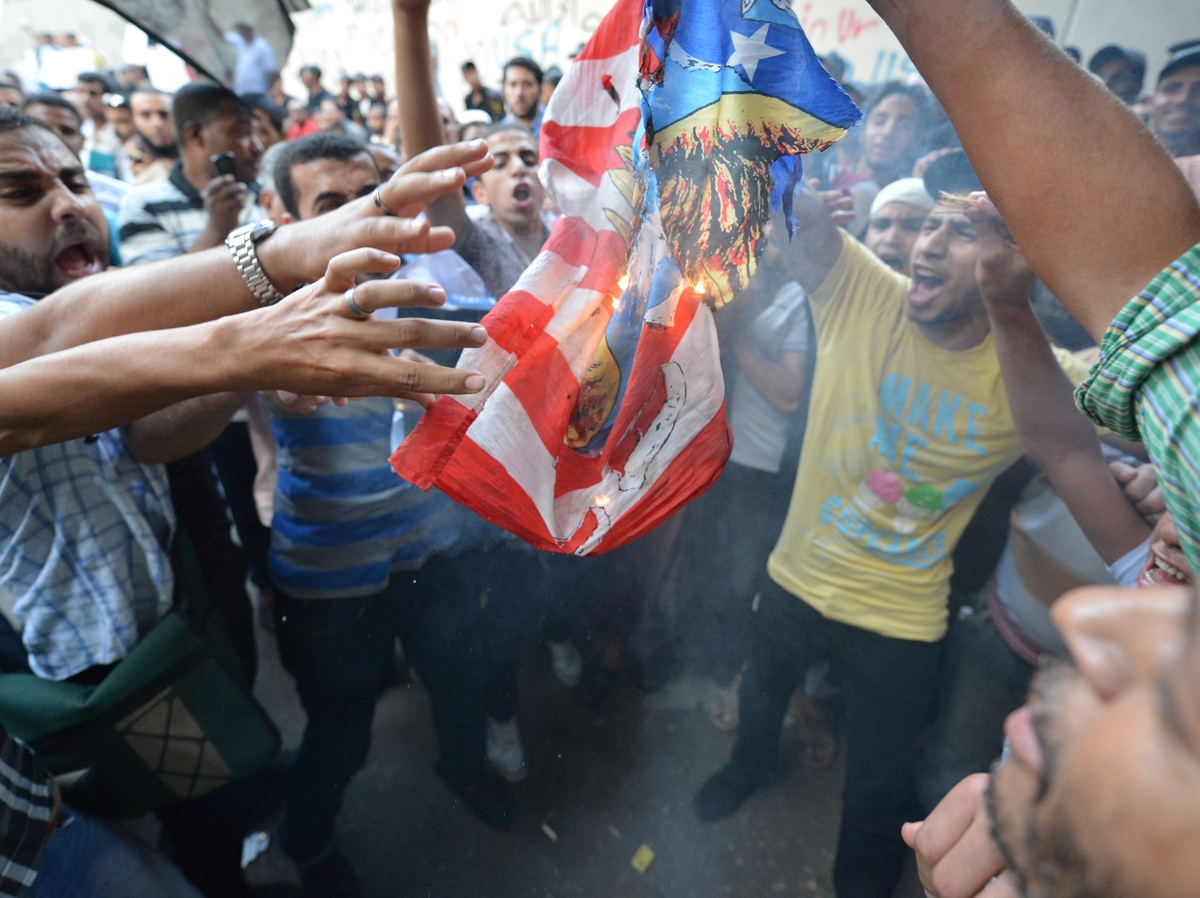 Egyptian protesters burn the US flag during a demonstration against a film deemed offensive to Islam on September 12, 2012 outside the US embassy in Cairo.

Read Another Perspective On The Attack On The American Embassy In Libya.

This story was written by the editors at The Nation.

How did a short, crude propaganda trailer — of obscure provenance, with no connection to any U.S .government agency or even any significant media outlet — lead to anti-U.S. rioting across the Muslim world? That's exactly what happened on the eleventh anniversary of Sept. 11th, after the trailer for Innocence of Muslims appeared on YouTube. Within a week, more than twenty had been killed — including the US ambassador to Libya and three of his staff members — and hundreds injured, from the Maghreb to Indonesia.

The response to the riots in some Western media outlets hewed predictably to the "clash of civilizations" line, with Newsweek, for example, running a hysterical cover titled "Muslim Rage" (quickly the butt of devastating parody) and highlighting an article by the provocateur Ayaan Hirsi Ali, who claims that intolerance has "become the defining characteristic of Islam." That mythology was echoed, for cynical geopolitical reasons, by Israeli Prime Minister Benjamin Netanyahu, who tried to define a yawning gulf between "us" (the West, especially America and Israel) and "them" (not just the mobs at the embassies but Iran, which he wants the United States to attack).

While it is true that freedom of expression has not been as firmly established, either culturally or constitutionally, in the Muslim world as it has in the West, this is far from a clash of civilizations, and there's much more behind the demonstrations than rage at one bigoted YouTube clip. For one thing, the video was first widely disseminated by Salafi media outlets, which called for the first protests at the US embassy in Cairo. And the Salafis, who preach a fundamentalist strain of Islam, are motivated as much by domestic politics as by U.S. policy or obscure videos (for more, see Sharif Abdel Kouddous's report "What's Behind the US Embassy Protests in Egypt" at TheNation.com). Among the many seismic reverberations set off by the more democratized politics of the Arab Awakening are fierce contests between Salafis and more moderate Islamists, notably the Muslim Brotherhood, to define political Islam. For the Salafis, the video was useful both to rally followers and as a wedge issue against Egypt's vulnerable Brotherhood, which is torn between the desire to placate Washington and the IMF — which hold the purse strings to billions in desperately needed aid—and a domestic constituency fed up with decades of imperial manipulation and support for autocrats.

Indeed, the deepest wellsprings of resentment lie in U.S. policy on the region. From backing dictatorships, to the strangulation by sanctions and eventual evisceration of Iraq, to drone strikes across the Muslim world, to steadfast support for Israel's occupation of Palestine, now in its fifth decade — the list of grievances is long (see Adam Baron, "Yemen Inflamed," at TheNation.com for insight into the roots of the latest protests in one country). And Muslims are well aware of the Islamophobia permeating American society and government (for more, see our special issue "Islamophobia: Anatomy of an American Panic," July 2/9). The video is just one particularly nasty example of a bigotry that has become pervasive throughout the Western world. Mitt Romney's attack on President Obama for "sympathizing" with those who attacked the U.S. consulate in Benghazi was, of course, a grossly opportunistic slander. But his ridicule of those who would "apologize" for America reflected an all-too-common cultural insensitivity toward Muslims — a bigotry many would not tolerate if leveled against Christians or Jews.

Washington's support for the Arab Spring was too inconsistent and came too late to outweigh America's troubled history in the region. The collapse of longstanding dictatorships has allowed antipathy against the United States to surface more visibly; it has also left weapons and money in the hands of Islamist radicals, many of them funded by the Persian Gulf monarchies. Indeed, Washington must finally confront the fact that our oldest regional ally, Saudi Arabia, happens to be controlled by Wahhabi fundamentalists who have spent billions spreading their ideology throughout the Muslim world. We should hardly be surprised when it blows back in our face.

The United States needs a radically new Middle East policy, based on respect for the democratic aspirations of Arabs and Muslims, with economic assistance focusing on jobs and justice, and an end to military solutions that seek control rather than cooperation. If we want a change in attitudes, we need a change in policy.