Accessibility links
As Numbers Swell, Syrian Refugees Face New Woes As the conflict in Syria grinds on, thousands are fleeing their homes for refuge in neighboring countries. Jordan, to Syria's south, is having a difficult time caring for the 200,000 who have arrived so far. 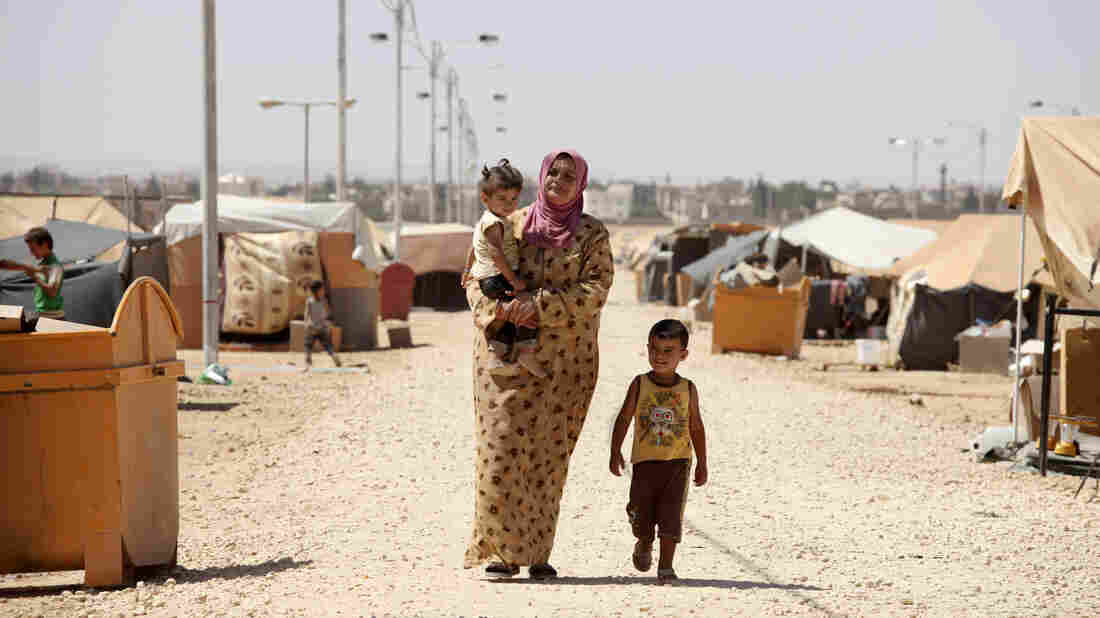 A Syrian refugee walks with her children at Zaatari refugee camp in Mafraq, Jordan, near the Syrian border, Sept. 8. Around 30,000 Syrians live at the camp, with the numbers growing each day. Mohammad Hannon/AP hide caption 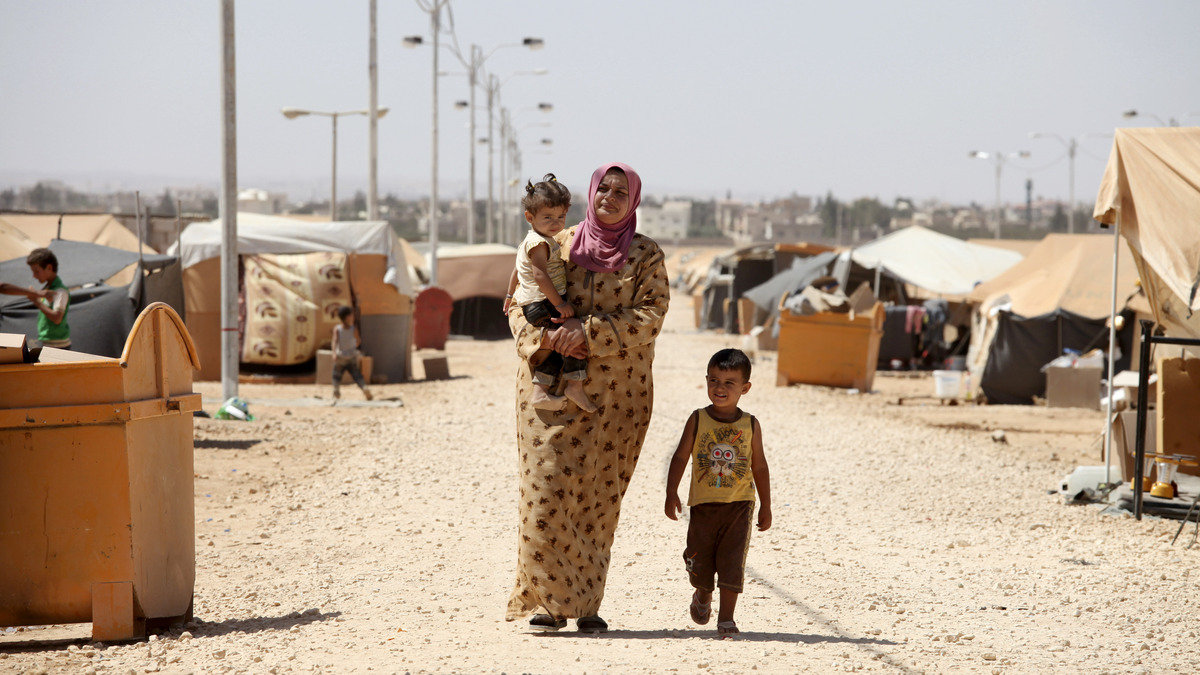 A Syrian refugee walks with her children at Zaatari refugee camp in Mafraq, Jordan, near the Syrian border, Sept. 8. Around 30,000 Syrians live at the camp, with the numbers growing each day.

Syria's refugees keep growing dramatically in number, and no country in the region has taken in more of them than Jordan — a poor, desert nation that is now hosting some 200,000 Syrians.

The conditions for the refugees are perhaps harsher in Jordan than in any other country, with many people sheltered in tents on a hot, dusty plain just inside Jordan's northern border with Syria.

At the Zaatari camp, everything is covered with a layer of sand and dirt; rows and rows of tents, once white, are now a golden color. 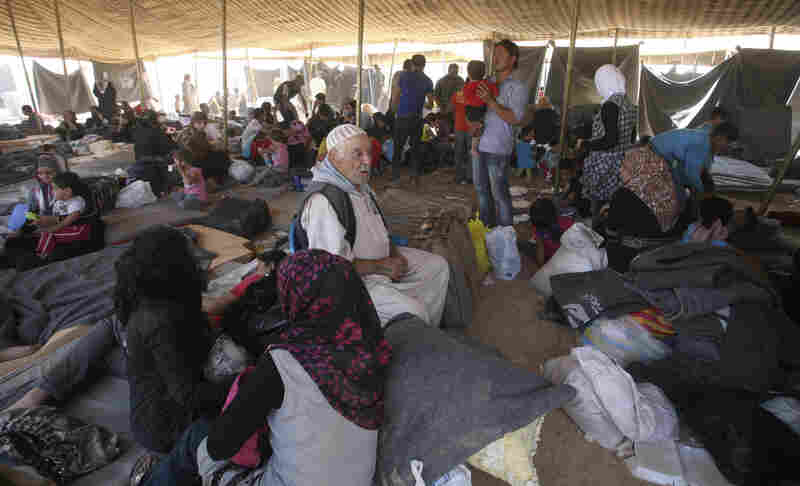 Newly arrived Syrian refugees gather at Zaatari camp, in Mafraq, Jordan, Aug. 29. Residents have rioted over the poor living conditions at the camp. The Jordanian government is not allowing Syrians to leave the camp and join friends or family elsewhere in the country. Mohammad Hannon/AP hide caption 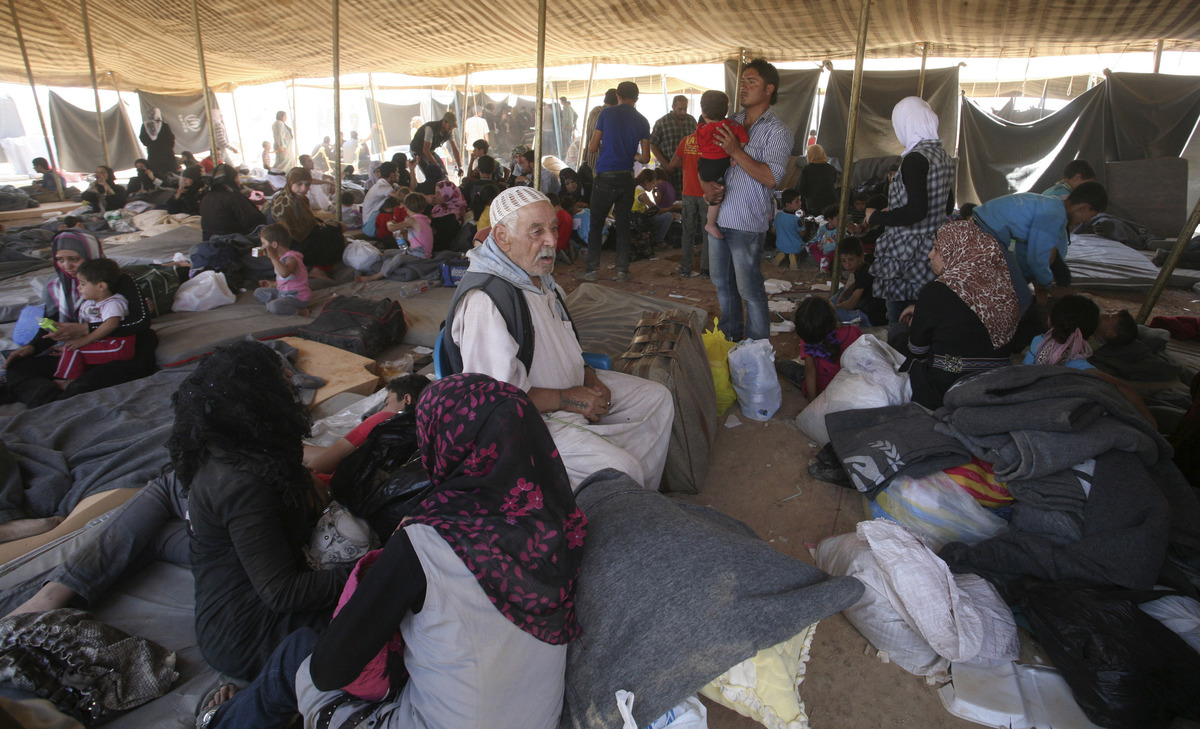 Newly arrived Syrian refugees gather at Zaatari camp, in Mafraq, Jordan, Aug. 29. Residents have rioted over the poor living conditions at the camp. The Jordanian government is not allowing Syrians to leave the camp and join friends or family elsewhere in the country.

Volunteers on a truck are distributing aid to families at the camp: boxes of rice and sugar from Saudi Arabia.

But then the truck starts to back up. Something is happening. Police are coming, people are running.

There's trouble over a tent. Two families have claimed one tent as their own. Men from each family have ended up in a fistfight.

Late last month, refugees staged a full-fledged riot over the conditions in the camp. There was another clash Tuesday.

About 30,000 people are now living in the Zaatari camp, with their numbers growing every day. And the Jordanian government says it can't keep up.

It has appealed for hundreds of millions of dollars from the international community. The U.S. has promised aid money to U.N. agencies that work with the refugees. The Saudi donations cover much of the food at the camp. Morocco and France have built hospitals.

Stuck At The Camp

For now, conditions remain poor. In one family's tent, two young babies with bad colds can't sleep at night. The family says they left Syria because government shelling was destroying the houses all around them.

A Bombing In Syria Wipes Out A Family, But A Baby Survives

One man says his brother has joined the so-called Free Syrian Army, a loose band of rebels fighting to bring down the regime of Syrian President Bashar Assad. So he brought all the women and children to Jordan, for fear the regime would kill them in revenge. They have only been at the camp a few days.

"We wish to leave the camp because we have relatives outside the camp. We want to go to their houses," he says. "Especially for the babies — it's really hard to live here for the babies."

The Jordanian government used to allow Syrians to leave the refugee camps and settle inside Jordan, as long as they had a Jordanian sponsor, says a relative. But now that has stopped.

Outside the tent, a widow — with five children who have no shoes — says she has gone from one insult in Syria to another insult here in Jordan.

"It is very bad situation. We wish to go out from the camp," she says. "We have friends here, we can go to their house."

Nearly all the refugees at Zaatari make the same plea: Just let us out, into the rest of Jordan, and we'll be fine.

But if all the refugees were able to leave, Jordan wouldn't be fine.

Jordan Struggles With Its Own Problems

Outside the camp and in the comfort of a noisy, open-air cafe, Jordanian analyst Yasar Qatarneh says Jordan's government simply can't do much more for the Syrian refugees.

The country is already under stress, he says. It already hosts millions of Iraqi refugees. Its economy is tanking, and it has its own protest movement to worry about.

Jordanians, he says, cannot add too many Syrian refugees to this mix.

"They are not blaming the outsiders or the refugees," he says. "But they say we don't need the extra problems. We have enough problems and enough trouble-makers. So we have a lot in our plate, and we don't need anything more."

Back at the camp, two-dozen men sit in a tent, trying to resolve the dispute from earlier.

Further down the end of the long and dusty row of tents, people crowd around funny man Abu Mohammed and beg him to tell a joke and cheer them up.

He imitates what a rocket looks like, whizzing overhead. The crowd roars with laughter.

Then he gets serious.

"A message for world countries," he says. "Help us, to protect our children, to return to our country ... safely."

Suddenly, everyone falls silent. Two Jordanian policemen have joined the crowd. They tell everyone to go back to their tents. The show is over.