Accessibility links
Mindy Kaling Loves Rom Coms (And Being The Boss) The actress played Kelly Kapoor on The Office, a role she also wrote and produced. Now she runs a new Fox comedy, The Mindy Project, in which she stars as an obstetrician whose personal life is a mess. Kaling tells Fresh Air that her late mother inspired her character's career. 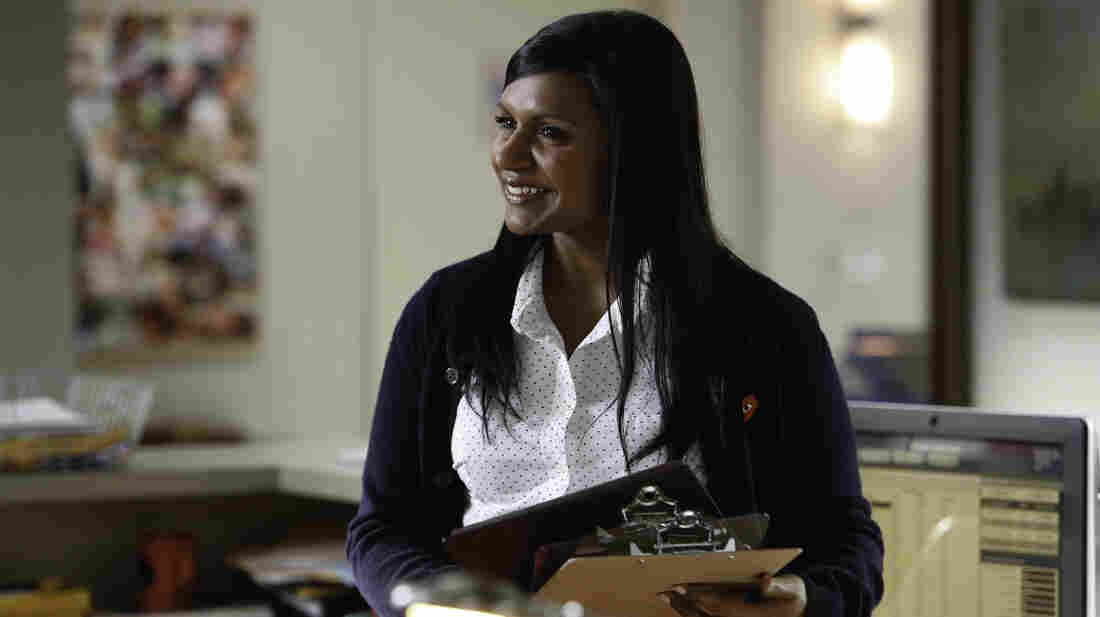 Dr. Mindy Lahiri (Mindy Kaling) must juggle a variety of responsibilities as an obstetrician-gynecologist in the new comedy The Mindy Project. Jordin Althaus/Fox hide caption 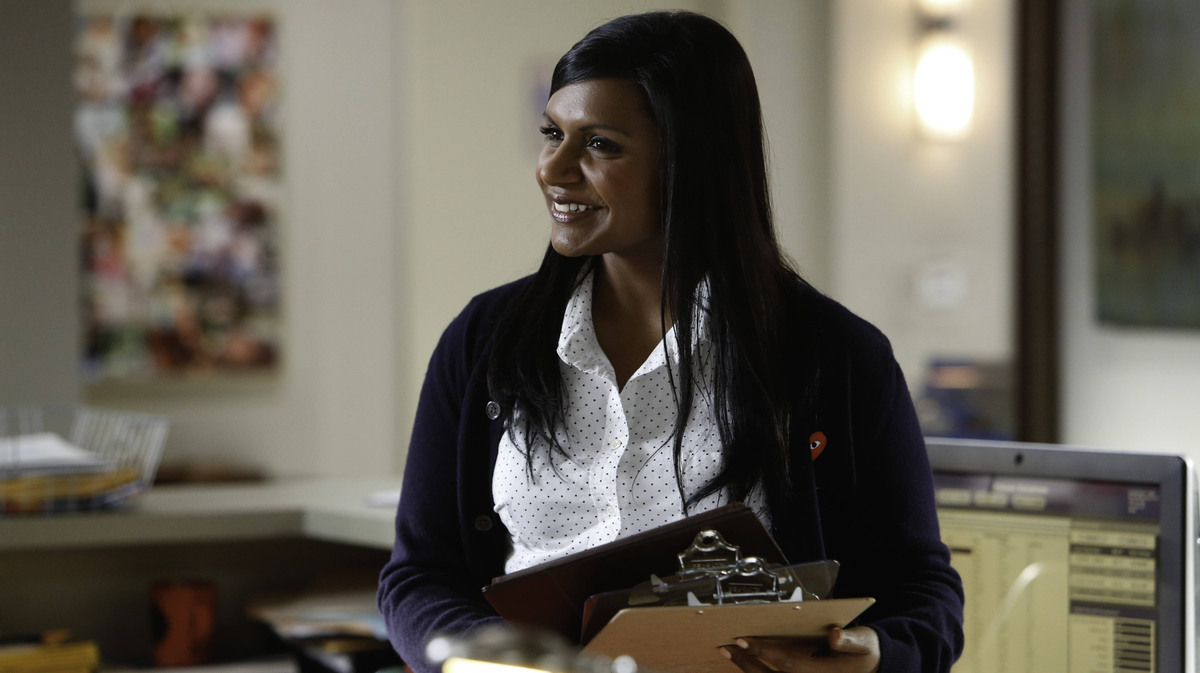 Dr. Mindy Lahiri (Mindy Kaling) must juggle a variety of responsibilities as an obstetrician-gynecologist in the new comedy The Mindy Project.

Mindy Kaling says she loves romantic comedies, even though she wrote last year in The New Yorker that saying so "is essentially an admission of mild stupidity."

Her new Fox TV show, The Mindy Project — which she created, stars in, writes and runs as co-executive producer — is essentially a serialized romantic comedy, where each week, viewers can check in with the character to see how her life is going, Kaling says.

Except she hopes her show is "actually funny," she tells Fresh Air's Terry Gross.

Kaling plays Dr. Mindy Lahiri, a successful obstetrician/gynecologist, whose personal life is a mess and who struggles to do the right thing.

Kaling's late mother was also an obstetrician-gynecologist — and an inspiration for Dr. Lahiri's career.

Kaling says that even though their actual jobs were very different, she and her mother had similar work ethics and long hours.

"I would often be leaving work at 11 o'clock at night in [Los Angeles] and call her in Boston and she would still be awake, waiting for a baby to be delivered," Kaling says. "It's fun to be surrounded by women in all different stages of their lives — some who are married, some who are expecting babies, some with families. It seemed like a good board for a character to be bouncing off her own neurosis."

Kaling played Kelly Kapoor in The Office, for which she also wrote and produced. She says she initially thought running her own show was a chance to "correct any pet peeves" from her old job; she wanted to listen to her writers the way she wanted to be listened to as a writer on The Office.

But about five weeks into The Mindy Project, Kaling realized she had to stop asking for as much input. It was hard, she says, because her "personality is to be chatty and to talk to people and hear peoples' problems."

As an Indian-American actress playing a lead on a TV show, Kaling says, she's gotten positive early feedback but still feels the burden of people pinning "their hopes and dreams" on her. She says she just has to brush aside her worries, because Dr. Mindy Lahiri is a "real character."

"This is not someone who should be winning a teaching award or being a role model," Kaling says. "Let me, Mindy Kaling, be a role model if anything — and that's pretty arguable, too — but let the character just be a funny character." 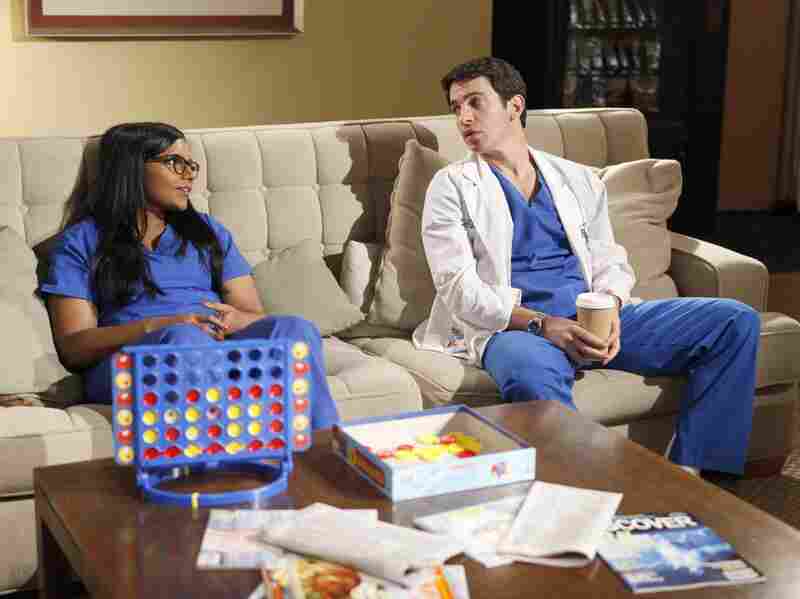 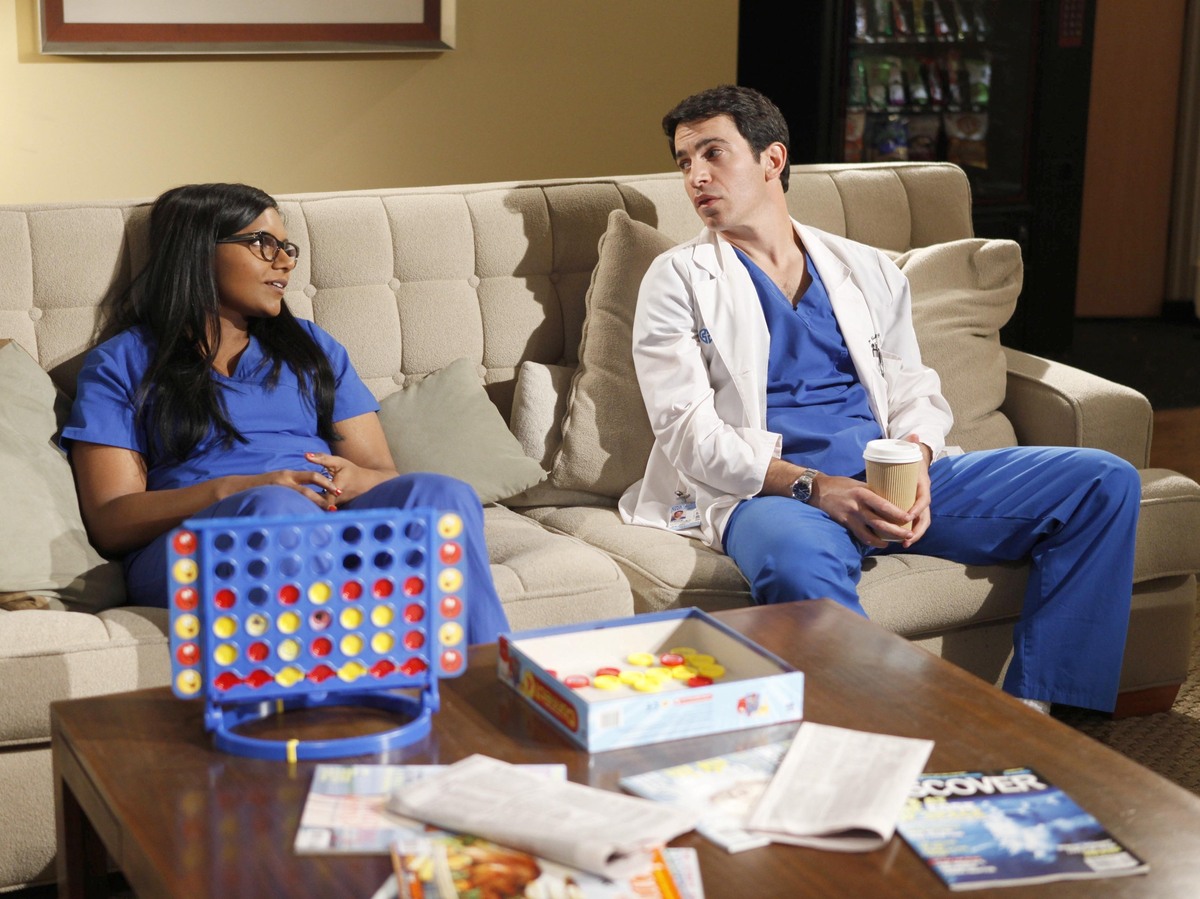 Danny (Chris Messina) and Mindy learn that medicine isn't all fun and games.

"Now that I'm in Hollywood, I have many friends who run their own shows, and one of the personality traits at a party — being overwhelmed by being a show-runner on a show — is just something people adopt. ...

"And one thing my mom and dad raised me believing is that everyone is busy, so it's not really a good conversation topic to talk about how busy you are. And it's a little narcissistic, in fact, to talk about that, because everyone is stressed out no matter what job you're in. Nobody is like, 'Yeah, I'm doing really well — work is just a total snooze and so easy.'

"So when I got this job, I thought, 'I'm going to be that person who is the star of their own show and the show-runner and the head writer, et cetera, et cetera — but I'm going to always seem like it's no big deal.' And I was actually able to do that for the first six weeks. And now, I have to say, it's a little hard to pretend that I'm just like this cool-as-a-cucumber person."

On the list of 15 things that women love to wear

More From 'The Office' Stars

"I have found it to be true that men tend to not understand or like sequins very much. Men don't like the wedge shoe, I have noticed. Men don't like the statement necklace or chunky, tribal jewelry. These are all the things, by the way, that I love, so the overlap in the Venn diagram of things that men hate for women to wear, and things that I love to wear, is almost full overlap ... which is unfortunate for me.

"Like most women, I dress for other women. If I was going to dress for men, in general, I would just be wearing a fitted black T-shirt and tight jeans every day. Of course, this is my unscientific research done by working with male comedy writers for the past eight years. They just tend to really like — this specific group of guys — really simple, clean lines, things like that, but I don't. So I dress for women, I wear all of those things, because I like looking at it. It makes me feel happy and excited to wear it."

"You have to struggle to try to remember the person before the [pancreatic cancer] diagnosis happened, because they really do change, as anyone would change. So for the first period of time ... the thing you remember most vividly is ... how the disease changed them. And then, now I'm beginning to remember my mom [when I was] 28, which is a real gift. But it was such a short amount of her life, that it seems unfair to her memory to let it cloud most of my memory of her."

On being an Indian-American actress on TV

"When you are the only Indian-American female lead in a television show, you seem to be making sweeping statements about that person simply because you are that person and the only one, whereas, for instance, Steve Carell — he's not making sweeping generalizations about white American men on his show because there's so many different white American men on different shows.

"So I get worried by doing this character that people think that I'm saying that about all those people. And I just have the weight of that on my shoulders, which is something that I do envy other performers for not having."