Accessibility links
Movie Review - 'Won't Back Down' - 'Won't Back Down' Takes A Too- Easy Way Out Writer-director Daniel Barnz aims to convey the idealism of a community fighting for its children's education. Critic Ella Taylor believes that the film is better described as a propaganda piece focused more on pointing fingers than offering believable solutions.

'Won't Back Down' Takes A Too-Easy Way Out

'Won't Back Down' Takes A Too-Easy Way Out 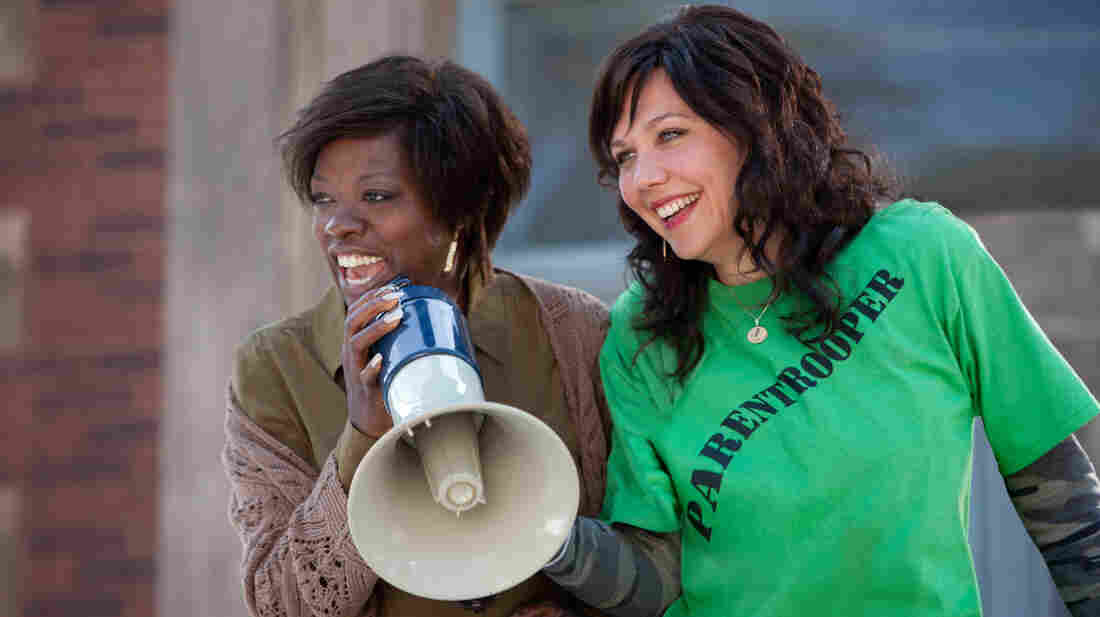 Among the many remedies we have flung at our foundering inner-city schools is a force we have reckoned without: Maggie Gyllenhaal, raising hell in the feistily titled Won't Back Down as a harried single mother eking out a living selling cars in a proletarian city, nobly represented under lowering skies by Pittsburgh.

Gyllenhaal's Jamie Fitzpatrick comes kitted out in the uniform expressly designed in Hollywood for plucky working-class mom-heroines. She dresses like a mid-level slattern and has a back-talking mouth on her, but she's all heart and unbeatable American optimism, not to mention a rabble-rousing tiger when it comes to the welfare of her daughter, Malia (Emily Alyn Lind), who's dyslexic.

So much of a tiger, indeed, that despite her slender means, Jamie has managed to disgorge $60 on a school backpack. This would be folly on any income, but the bag quickly takes on prime plot value as a symbolic stick with which to beat the Underperforming, Furtively Texting Teacher (Nancy Bach) who's selling Malia and her entire out-of-control class short. Hovering protectively behind that bad egg is the real villain of the piece, the teachers union. But more about that down the line, after the movie has paid its dues to some good teachers and some good union comrades who go against the grain.

Joining forces with Nona (the great Viola Davis), a disheartened educator at Malia's failing public school who also has a learning-disabled son (Dante Brown), Jamie handpicks a few burned-out but salvageable teachers. Going door to door, Jamie and Nona recruit an army of madder-than-hell parents to take on a bound-and-gagged principal, the board of education and the dreaded union, the better to take over the school and do things right.

Won't Back Down comes accessorized with a regulation blooming romance for Jamie, a sorely tested marriage for Nona, and much obstructionist red tape and special-interest wrangling to be overcome through individual initiative and people power.

All cynicism aside, the movie taps a rich vein of accumulated public frustration at the continued failure of government to provide decent access to public schools for all American children. Aside from religion itself, no subject lends itself more to arm-waving entrenched positions than education. And perhaps a movie aimed at a mainstream audience can't help but distill the discussion into culture-war sound bites. 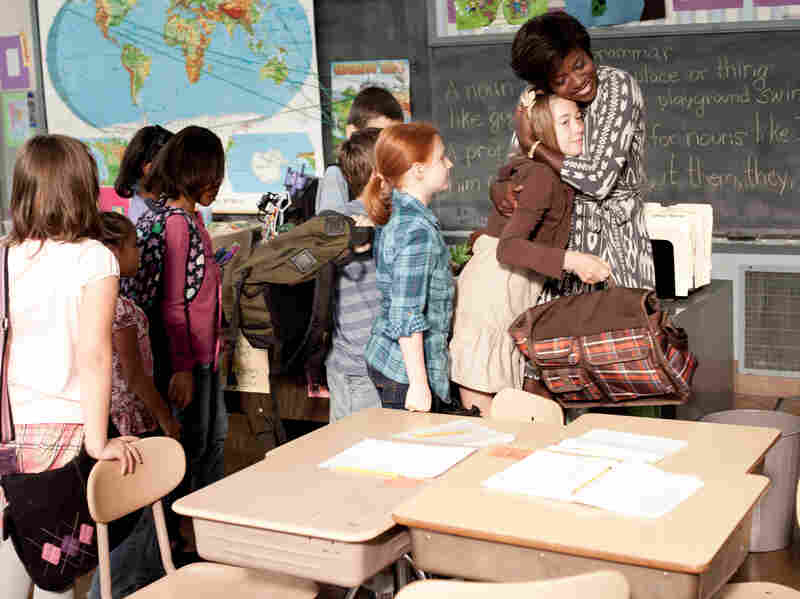 Nona must challenge the teachers union in order to provide the education she knows her students deserve. Kerry Hayes/Twentieth Century Fox hide caption 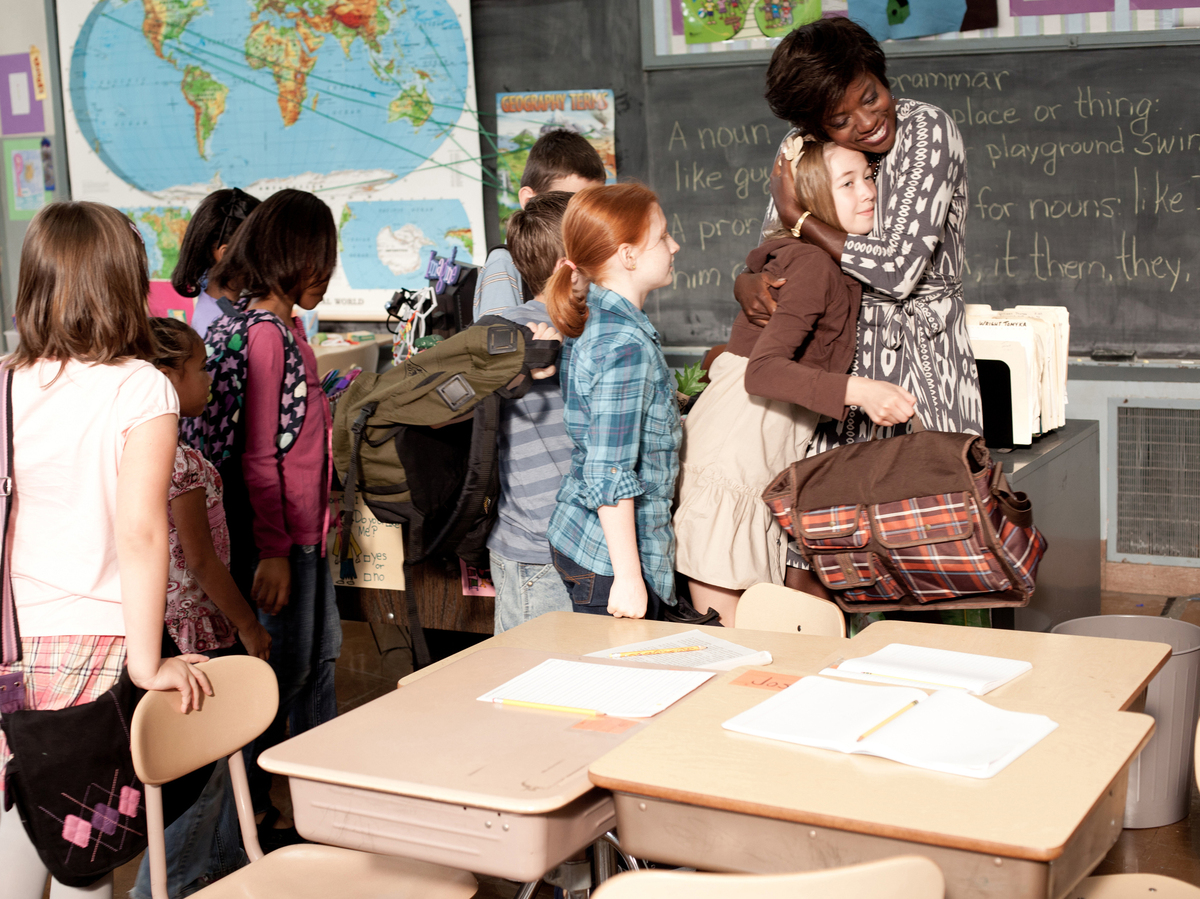 Nona must challenge the teachers union in order to provide the education she knows her students deserve.

For all its strenuous feints at fair play, though, Won't Back Down is something less honorable — a propaganda piece with blame on its mind. Directed with reasonable competence by Daniel Barnz from a speechifying screenplay he co-wrote with Brin Hill, the movie is funded by Walden Media, a company owned by conservative mogul Philip Anschutz, who advocates creationist curricula in schools. Walden also co-produced the controversial pro-charter school documentary Waiting for Superman, so the outfit is not without axes to grind.

That movie's love affair with the charter movement seems to have cooled somewhat in Won't Back Down, which features a lottery scene complete with nail-biting parents vying for a handful of vacancies at the excellent Rosa Parks Charter School. The fact that many charter schools have failed to produce better-educated kids, however, is not where this strenuously populist scenario is headed.

Nor is the movie interested in the vexed question of what makes a good teacher, though Jamie acquires a dishy boyfriend, Michael (Oscar Isaac), the school's talented music teacher as well as the owner of a shapely posterior, which she admires from the lower end of a classroom ladder.

Michael is a staunch union man, but he's soon won over, and before you know it he's got a pack of hitherto lethargic teachers up and running in a line dance that recharges their classroom vitality. In other triumphal if wildly improbable news, the head of the teachers union (Holly Hunter) and the retiring chair of the school board (Marianne Jean-Baptiste) roll over like felled skittles and join the cause.

Who wouldn't, faced with a supercute warrior mom like Jamie, a teacher dripping with dignified gravitas like Nona, and a herd of had-it-with-this-crap parents wearing "Parentrooper" T-shirts? Only the union hack (Ned Eisenberg) remains unimpressed, declaiming long and loud that his mission is to protect teachers, while pupils can go hang.

In fact, it's nuance and reason that fall by the wayside amid the sloganeering rhetoric of Won't Back Down. Like most large institutions with interests to protect, the unions could use some reforms, especially when it comes to shielding bad teachers from scrutiny and discipline.

But if you were to wave a magic wand that replaced unions and bureaucrats with a rainbow coalition of local parents and educators coming together to create the kind of school they want, the result would be chaos, not to mention an end to the tattered remains of our common culture.

"We need to start somewhere," comes a stern, God-like voice in Won't Back Down, waving off all talk about the role of poverty and inequality in under-resourced schools and underachieving pupils. We do indeed. Just not here.