Accessibility links
Tokyo's Governor Stokes The Island Feud With China Tokyo's flamboyant and ultraconservative governor, Shintaro Ishihara, said last spring that his city would buy some islands in the East China Sea. Today, China and Japan are caught in a war of words over who controls those islands. Some observers call Ishihara's move a power play that has sparked a crisis. 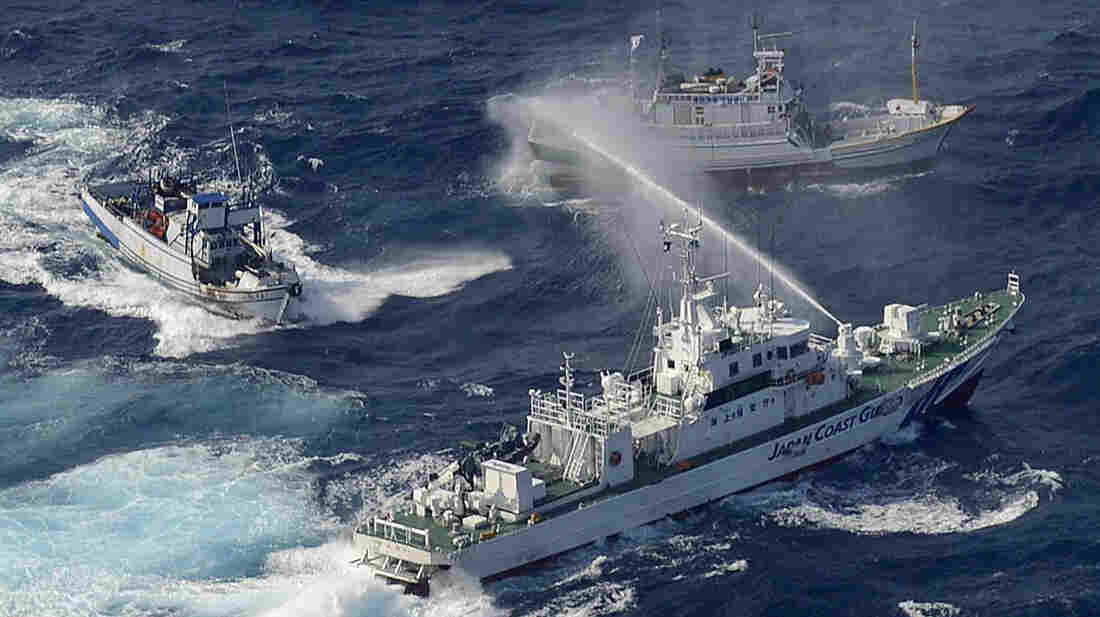 China, Japan and Taiwan all claim the Senkaku-Diaoyu islands as sovereign territory. On Tuesday, coast guard vessels from Japan and Taiwan dueled with water cannons after dozens of Taiwanese boats escorted by patrol ships sailed into waters around the islands. Yomiuri Shimbun/AFP/Getty Images hide caption

Japanese politicians are prone to vague pronouncements and a lot of bowing. But not Tokyo's flamboyant, ultraconservative governor, Shintaro Ishihara.

Ishihara, now in his fourth term, thrives on outrageous statements and sensational headlines, and is a central figure in the dispute between China and Japan over uninhabited islands in the East China Sea.

The islands, known as the Senkaku in Japan, and Diaoyu in China, have become the worst foreign policy crisis to embroil the two Asian superpowers in decades, stoked by nationalist feelings on both sides.

For Ishihara, such controversy is nothing new. 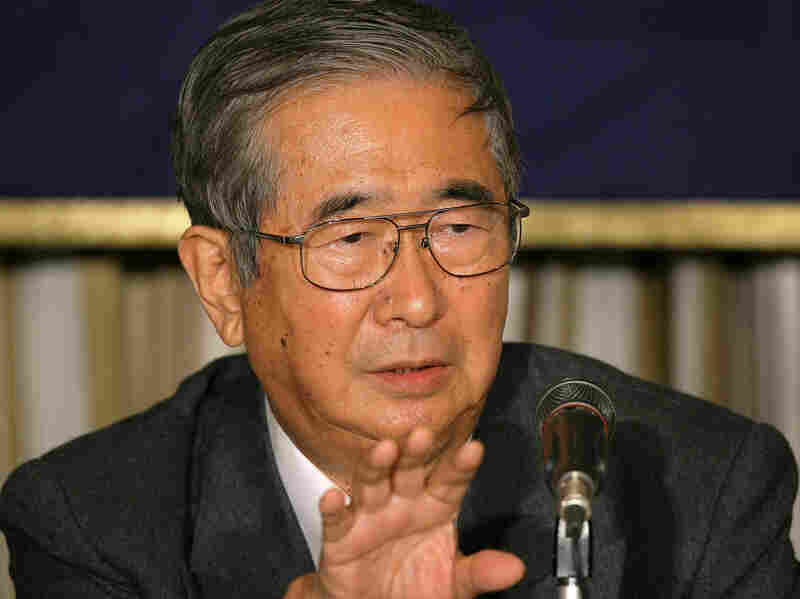 Tokyo Gov. Shintaro Ishihara, seen here at a 2009 news conference, is blamed by some for touching off the worst foreign policy crisis between China and Japan in decades. Kiyoshi Ota/Getty Images hide caption 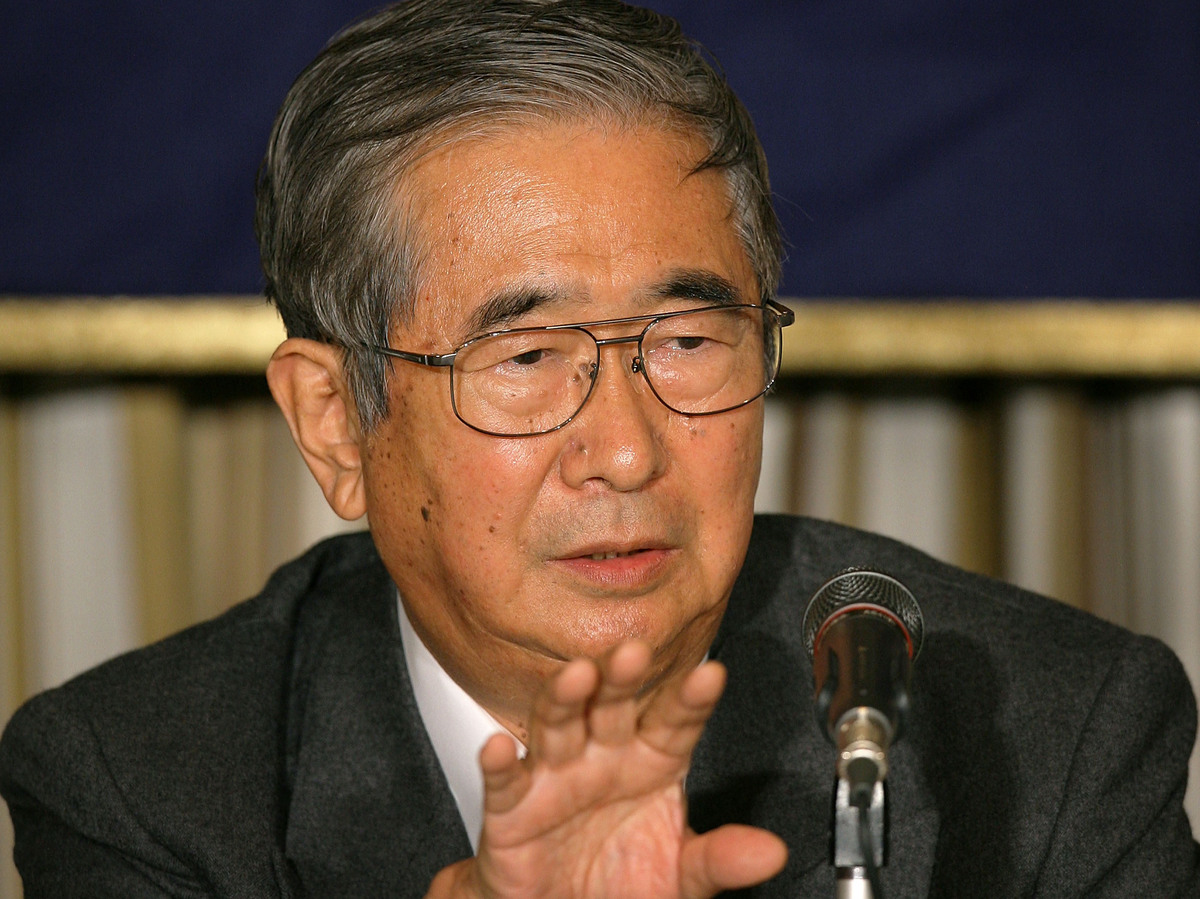 Tokyo Gov. Shintaro Ishihara, seen here at a 2009 news conference, is blamed by some for touching off the worst foreign policy crisis between China and Japan in decades.

Just after the March 2011 tsunami and earthquake in Japan, Ishihara called the catastrophe "divine punishment" for the "egoism of the Japanese people."

Ishihara later walked back those remarks, but over his long political life, he has made a career out of lobbing insults at everyone from foreign residents in Japan to Mickey Mouse. Reporters who dare to call his bluff can expect vicious retaliation, by name, the next time he steps in front of the TV cameras.

But for all the limelight he enjoys, Ishihara, who turns 80 this month, has never gained the thing he seems to prize above all: the title of prime minister.

So in what seems to be the sunset of his public career, Ishihara indulged in another grand gesture last s pring. He announced that the city of Tokyo would buy the Senkaku-Diaoyu islands that Japan and China have long feuded over.

Observers like Takao Toshikawa, editor of the Insideline political newsletter, say that in the current free-for-all of Japanese politics, Ishihara saw his opening and took it.

"Even if it's just for just six months or a year, he still has that desire to be prime minister," Toshikawa says. "In other words, Ishihara is using the Senkaku Islands issue to achieve his own ambitions."

Disputed Islands In The East China And South China Seas

"Anyone could have purchased that island," Taniguchi says. "So Mr. Ishihara, sick and tired of cowardness, in his own term, of the Japanese central government, he wanted to take the initiative."

An Issue Of Pride — And Minerals

Japan's ultraconservatives take at face value bellicose statements by Chinese hawks, who have called not just for taking the Senkaku-Diaoyu islands, but even the Japanese island of Okinawa.

"If you lose the Senkakus," Taniguchi says, "you have to be prepared that the East China Sea will be dominated by the naval presence of China."

Little Islands Are Big Trouble In The South China Sea

Japan has quietly controlled the Senkakus since World War II, leasing them from a private Japanese owner. But when Ishihara threatened to take over the property and put buildings on it, the central government tried to head him off by hastily nationalizing the islands.

Analysts suggest that in the tightly controlled run-up to China's leadership transition this fall, Japan was hoping the streets of China would not erupt in anger. That assumption has proved entirely wrong as protesters have rallied in large numbers.

Tussling over the Senkaku-Diaoyu islands, which are situated near potentially rich mineral reserves, was kept more or less off the boil for decades.

This was in line with a famous quote from former Chinese leader Deng Xiaoping, who urged the two sides to shelve the issue in order to build their economic partnership.

"Now we're in situation that is almost out of control," Schulz says. "Not on a military level or entirely economic level, but on a political level in terms of solving it smoothly, and that is what nobody actually wants."

While no one predicts a military conflict, the Senkaku-Diaoyu impasse may drag on until well after China's new leadership is in place. Japan could take a harder line if the current Democratic government is replaced by conservatives, in a snap election that could happen early next year.