Accessibility links
Young Illegal Immigrants Seek Work Permits It's been more than a month since the government began accepting requests for its Deferred Action for Childhood Arrivals program, a new policy for young people brought to the U.S. illegally as children. It means that for two years they can avoid deportation and get a work permit. 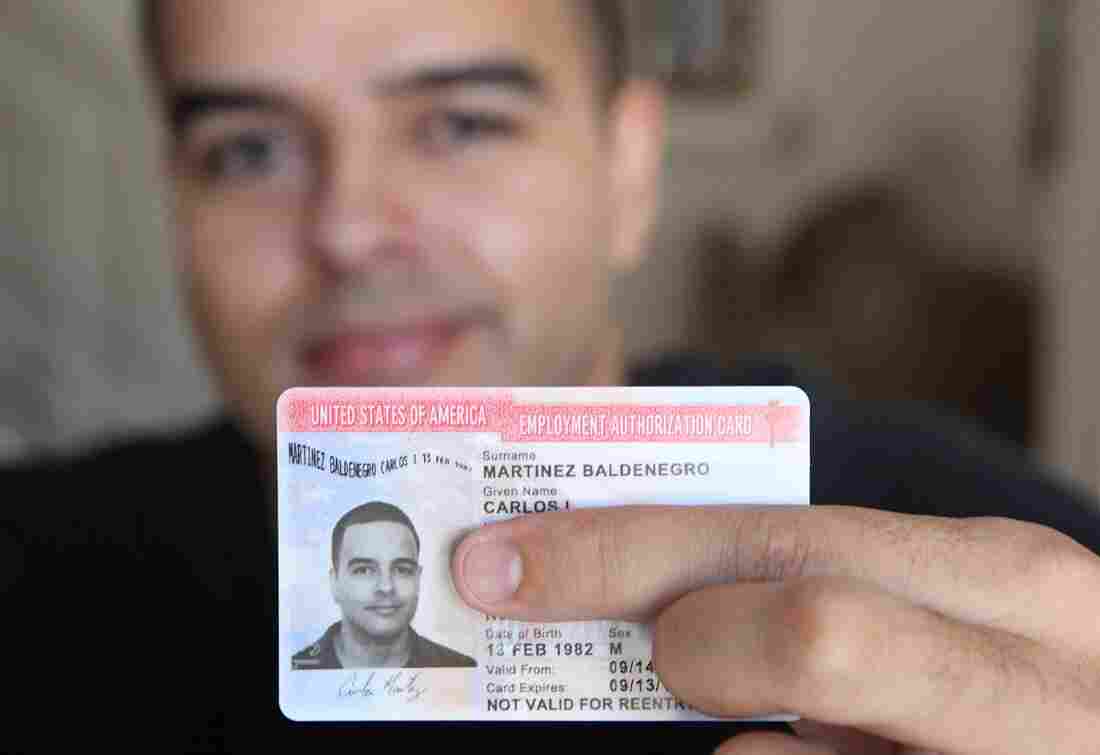 It's been more than a month since the government began accepting requests for its Deferred Action for Childhood Arrivals program, the Obama administration's policy for young people brought to the U.S. illegally as children. Hundreds of thousands of people are eligible for the program. So far, only 82,000 have applied.

Carlos Martinez is one of the 29 people who have actually gotten deferrals. It means that he won't be deported, and that he can get a work permit. Martinez applied for the deferred action program the first day.

Sitting in his parents' home in Tucson, Ariz., he's especially excited about the two-year work permit.

Martinez was brought to Tucson from Mexico by his parents at the age of 9. As a high school junior, he realized he was in the country illegally. He graduated from high school and earned a bachelor's and a master's degree in software engineering from the University of Arizona. That was seven years ago. Now at 30, he says he can finally use his skills to apply for a job at one of his dream companies.

"Microsoft or Google or Cisco — you name it. Top, top software companies. I can definitely contribute. I have so many ideas," he says.

Up the road in Phoenix, Dulce Vazquez is one of the young people volunteering at the Arizona DREAM Act Coalition office. They're organizing a voter registration drive. Vazquez says she's applying for deferred action as soon as she can gather the paperwork.

"Just today I got my medical records that I'm going to use to kind of show a timeline, a consistent timeline of me being here, present and active within the community as well," Vazquez says.

Applicants have to prove they've been in the U.S. illegally but continually for the past five years; they have to be between 15 and 31 years old; and they have to be in the military, in school or have graduated. Vazquez says she's submitting even more evidence just to be sure — high school attendance and honor roll awards, a state award for future business leaders.

"That's my way of proving I'm not a danger to society of any kind. Even though they're going to be doing a background check anyways, but I'm still being a little bit paranoid I guess," she says.

But Francisco Luna says it's not so easy for him. For starters, he's having trouble coming up with the $465 government fee for the program.

"What's stopping me? Currently right now it is the money, and I do believe I have a few gaps," Luna says.

By gaps, he means records proving he's been in the U.S. continually for five years. Luna is 22 and says he's been in the Phoenix area since he was 10. He graduated from high school, but he's been going to college only off and on since. So he says he may try some other ways to fill in the gaps — like Facebook.

For the record, Facebook posts may have dates attached, but a government spokesman says they're not very good evidence. Officials are looking for lease agreements, medical records, school transcripts. Some school districts, in fact — like Los Angeles Unified — have reported being swamped with transcript requests. That could explain some of the delay in submissions; so could fear. Luna is afraid the policy could change depending on who's elected president.

"If President Obama does not get elected and Romney comes in — either he changes the policy and takes it off, or changes the criteria to it," Luna says.

That could happen. The Obama administration says the deferred action program is prosecutorial discretion — a way to focus immigration enforcement on higher priorities, like criminals. Republicans say it's an administration overreach — a backdoor amnesty.

Martinez says worrying about what may happen down the road is silly.

Martinez argues that any protection — even temporary — is better than none at all.