Time And Crime, Thoroughly Crossed Up In 'Looper'

Time And Crime, Thoroughly Crossed Up In 'Looper' 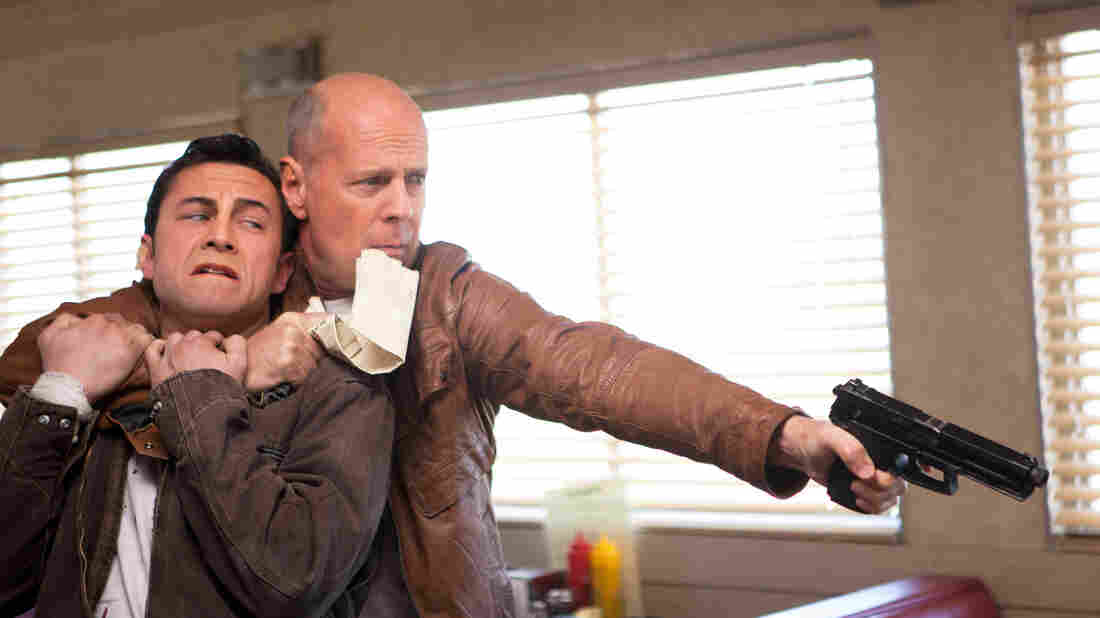 The main problem with time-travel movies is the many black holes that the plot can stumble into; for a certain kind of viewer, they can be more than a little distracting. While the story presses forward, we're stuck wondering, for instance, how a character can safely hang out with his future self in the same time period — an anomaly that, despite Spock's shenanigans in the 2009 Star Trek reboot, aficionados of Doctor Who know is a Very Bad Thing.

Looper, a cocky sci-fi tale with more brass than substance, is rife with these "Say what?" moments. And though writer-director Rian Johnson smartly tries to eclipse the technical with the personal, that strategy only works if you have a lead who earns our sympathy. It takes time — and Joseph Gordon-Levitt turning into Bruce Willis — for that to happen, but it's all the encouragement we need to forgive the film's irrationalities and enjoy its offbeat performances and stylized nihilism.

Narrating his own story, Joe (Gordon-Levitt) informs us that it's 2044, and time travel is 30 years away. It will, however, be criminalized, so of course only criminals will have access to it. In the unimaginative way of big-screen bad guys, they use it mostly to give their victims a one-way ticket to the past, where a "looper" like Joe is lurking, ready to kill them. Why the mob of the future can't just fit its marks with the time-tested cement footwear is unclear.

Weirdly, loopers approaching pensionable age are also dispatched to the past for termination, often by their younger incarnations. (See "Say what?" moments, above.) Should a young assassin balk at popping his elderly self, a controller (a shaggy Jeff Daniels) is waiting to punish him, usually with a hammer and a deeply pained expression. Well-behaved young loopers, on the other hand, enjoy a privileged life of drugs and dames, and Joe is studying French and stashing silver bars under his floorboards in hopes of escaping to a less stressful retirement. 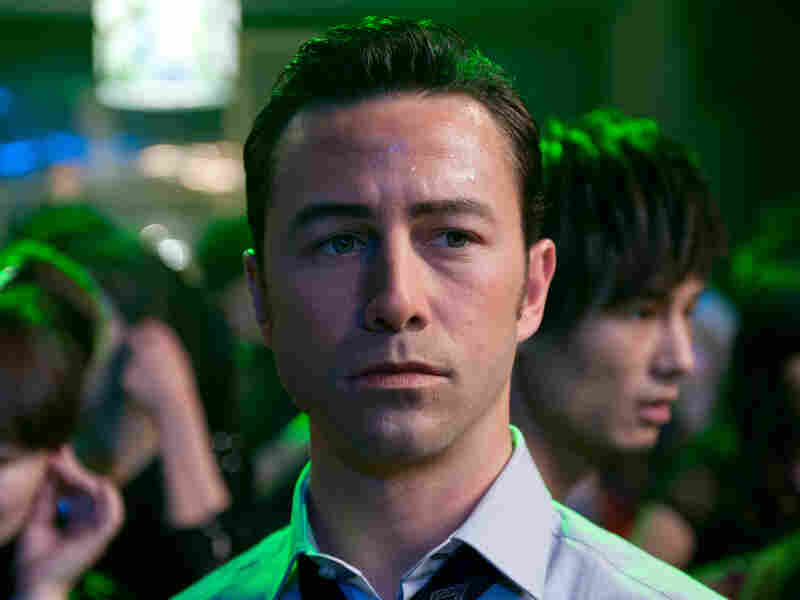 An assassin working in the film's chaotic 2044 futurescape, Joe is confronted with the task of killing his older self. Alan Markfield/Sony Pictures hide caption 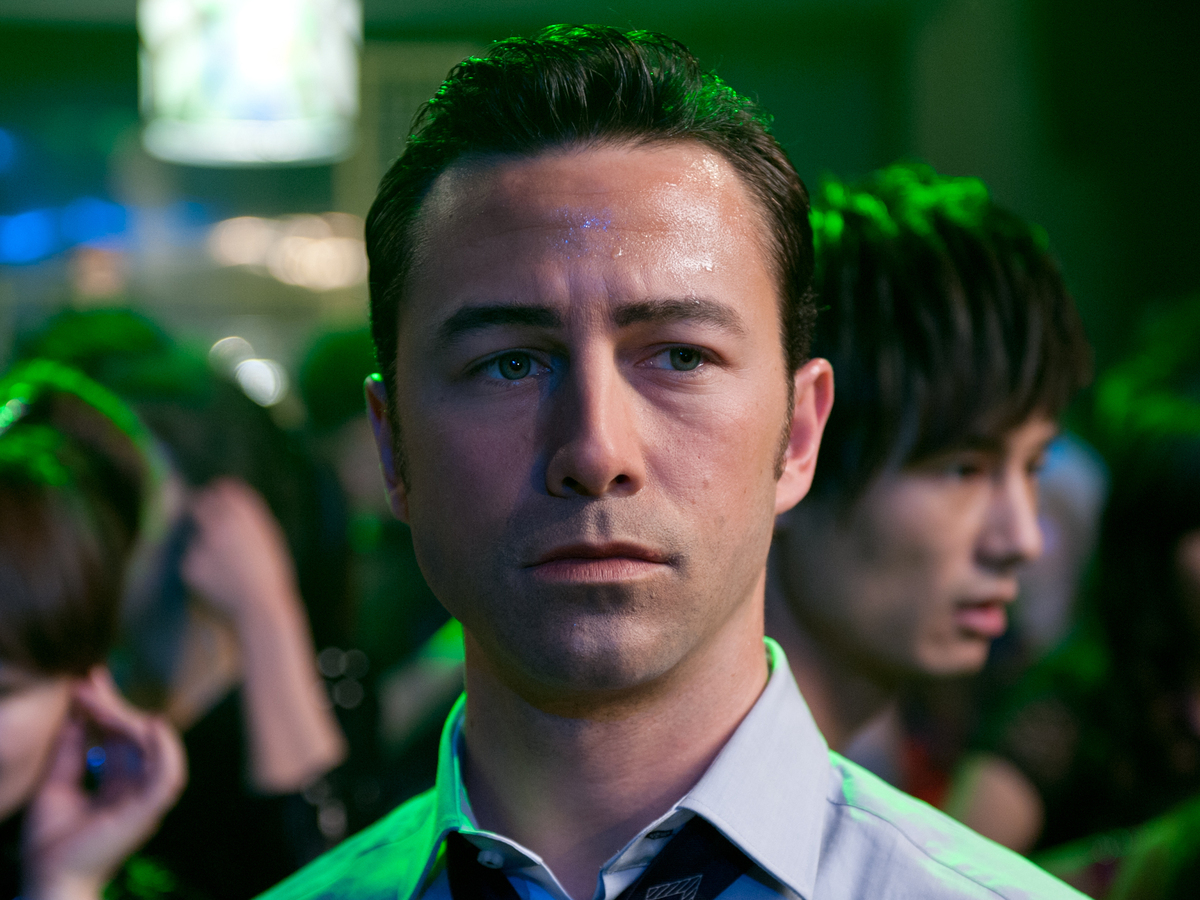 An assassin working in the film's chaotic 2044 futurescape, Joe is confronted with the task of killing his older self.

Then, predictably, he discovers that his next victim is Future Joe (Bruce Willis), a wily type who tries to persuade Present Joe to help him terminate a kid who will grow up to become the crime-world equivalent of the Antichrist. What follows is an extended cat-and-mouse caper as the Joes hide from each other — and, in the case of Present Joe, from the boss and his hammer — until everyone convenes at an isolated farmhouse. There, Emily Blunt awaits with a shotgun, a simmering libido, and a son who goes all Damien from The Omen whenever he gets irritated. Which is a lot.

Set mainly in a grimy urban landscape cribbed from Children of Men and its like, Looper is a self-consciously good-looking, profoundly silly movie that nevertheless comes off as high-minded. That's quite a trick, and it's helped by Gordon-Levitt's transformation from the geeky charmer of his earlier films to morally confused dead-eyed hard case. At times he has an odd, effects-enhanced look that resembles an avatar in a video game, but at no time does he look like he could grow up to become Bruce Willis. And that's a pity — because as we all know, there are much worse fates.