Accessibility links
Big Quakes Signal Changes Coming To Earth's Crust A huge, magnitude-8.7 earthquake in April produced stronger ground shaking than any earthquake ever recorded, and surprised seismologists by triggering more than a dozen moderate earthquakes around the world. One seismologist thinks we're witnessing the gradual evolution of a new boundary between tectonic plates. 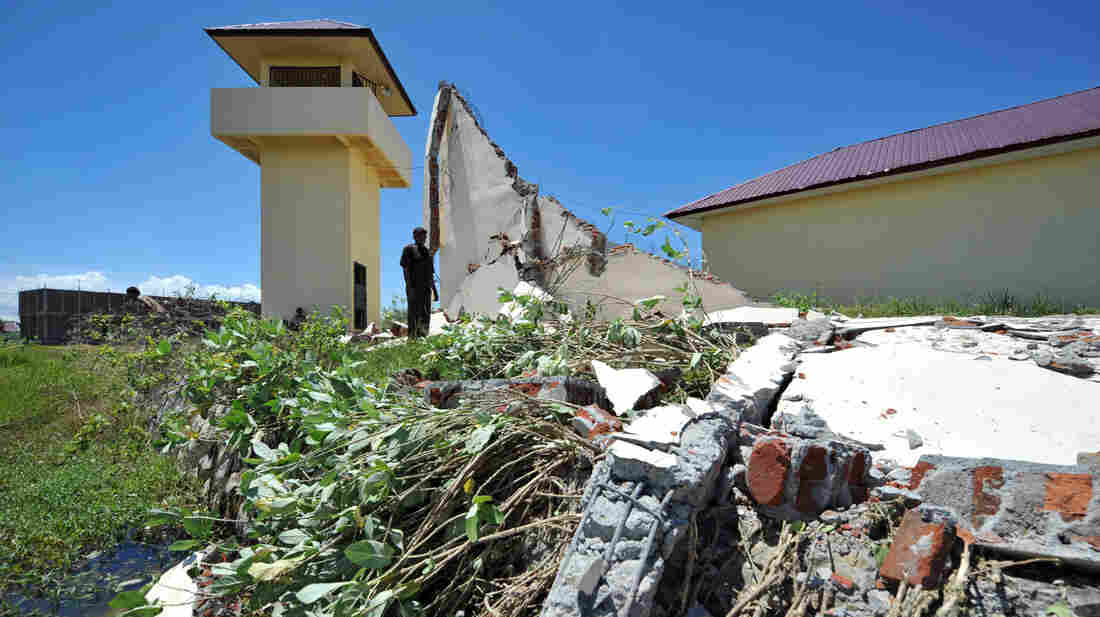 A prison official examines the damage a day after a powerful earthquake hit the west coast of Indonesia in Banda Aceh on April 12. Adek Berry/AFP/Getty Images hide caption

On April 11 of this year, an extraordinary cluster of earthquakes struck off Sumatra. The largest shock, magnitude 8.7, produced stronger ground-shaking than any earthquake ever recorded. And it surprised seismologists by triggering more than a dozen moderate earthquakes around the world.

The quakes are also a sign of big changes to come in the Earth's crust.

But chances are you don't remember the April 11 quake off Sumatra. That's because it was far offshore, so nobody got severely shaken, and it didn't produce a killer tsunami. But the event didn't simply fade away for Ross Stein at the U.S. Geological Survey in Menlo Park, Calif.

"I was having dinner with my wife at a restaurant a few hours after this earthquake had occurred, and I kept getting paged," Stein says, "and I would look and see that a large earthquake had occurred somewhere around the world. And it just seemed very, very odd that we were having this run of earthquakes of magnitude 5 and larger in this short space of time."

Stein's pager didn't stop after dinner. It kept going off for nearly a week, because moderate quakes kept popping up all around the world.

It turns out this was no ordinary quake.

"The shaking produced by this earthquake is larger than any other earthquake recorded, even though we have earthquakes such as the magnitude-9.2 event in 2004, which is 10 times larger than this one," Stein says.

The energy from this quake was all released in about two minutes, compared with eight minutes for the quake that triggered the deadly Indian Ocean tsunami in 2004. And while most quakes of this size move the ground up and down — which can cause tsunamis — ground movement during the April quake was side to side.

"This is the largest strike-slip, or San Andreas-like earthquake, ever recorded," Stein says.

The shock sent a series of long seismic waves around the world, shaking the ground horizontally and ringing the planet like a bell. Those are called Love waves, and Stein suspects they were strong enough to trip quakes on faults that were pretty close to failing to begin with — not creating new hazards, just changing the timing of quakes.

And the story here isn't just about distant quakes. Seismologists studying the April 11 quakes themselves were also in for a surprise.

"The main shock, the 8.7 event, ruptured on four different faults, which is really unusual," says Thorne Lay at the University of California, Santa Cruz. He and his colleagues describe this in a separate paper in Nature. Lay's team found that the quake zigzagged through a hash mark of faults. And the quakes themselves were not where anybody expected them to be.

"They didn't happen where we typically observe very big earthquakes," Lay says. "It was not on the boundaries between tectonic plates, where plates are rubbing against each other."

Instead, Lay thinks we're witnessing the gradual evolution of a new boundary between tectonic plates.

Here's the big picture. Australia and India sit on the same vast chunk of rock, along with a large swath of the seafloor. This makes up one tectonic plate, "and it's all been moving together northward pretty much coherently for many tens of millions of years," he says.

The western half of that plate has run up against Asia. That slow-motion collision is pushing up the huge Himalayan mountain chain. But the other half of that plate, to the east, is still moving north, unimpeded.

"One part got stuck," Lay says. "The other part kept going. And that sort of wrenched the plate."

That wrenching spot is where the April 11 events took place. Over millions of years, Lay figures, a new plate boundary will form there.

"This event is a very tiny step in that evolution. But it's geologically fascinating to actually be able to record it in our lifetimes and see that process going on," he says.

The new plate boundary will appear only after thousands of more quakes like the ones in April tear up the rock and shift the stresses that are constantly reshaping our planet.