Accessibility links
American Airlines Fliers Fed Up As Labor Clash Rages It hasn't exactly been a barrel of fun flying American Airlines lately. The carrier, which is in bankruptcy, is in a bitter contract dispute with its pilots union. Its on-time performance has plummeted while cancellations are way up. Meanwhile, some of American's best customers are rethinking their loyalty. 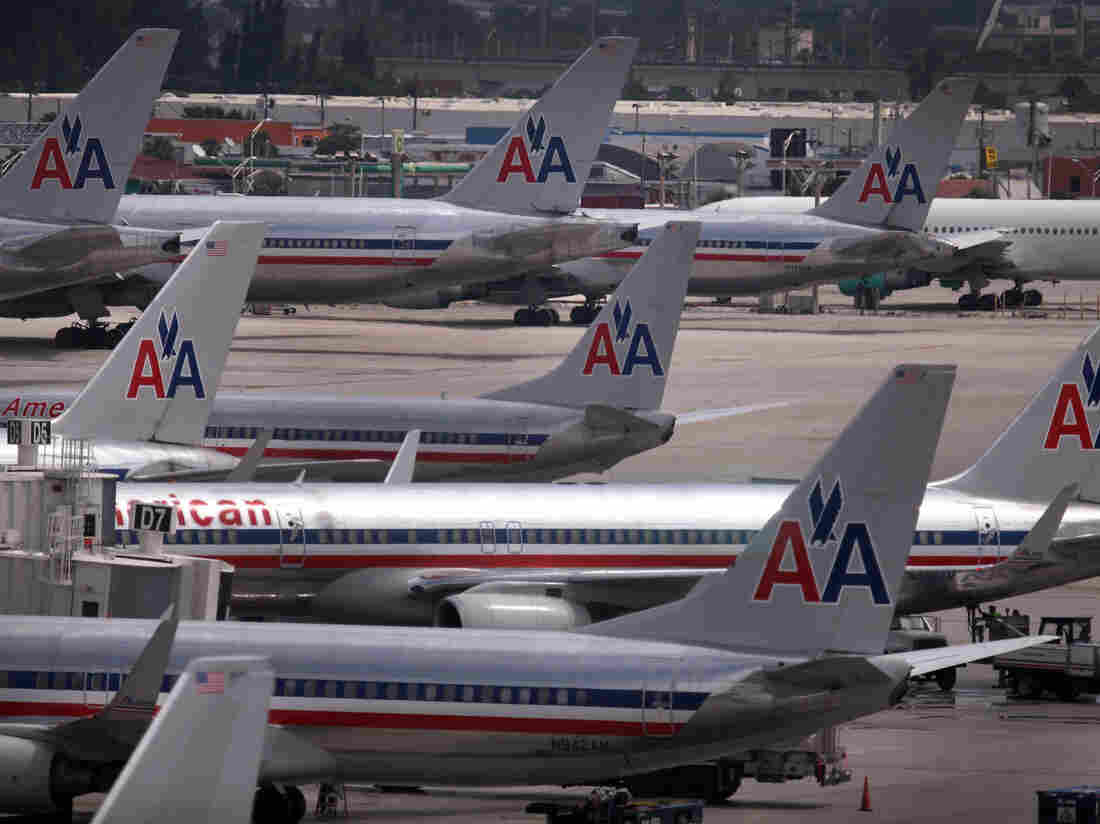 Pat Henneberry is an airline's dream customer. She flies all week, every week, and buying an $800 ticket so that she can have full flexibility is standard operating procedure. She's an American Airlines platinum customer. But she is fed up with the endless delays and cancellations.

"On Monday I didn't get on the plane. Basically, they said they're going to be late, then an hour later they said they're canceling. It's a direct flight to Chicago. It's easy to get equipment. They said it was maintenance. It was definitely a big, huge red flag that they're canceling, because they don't have any pilots to fly any planes," she says.

Henneberry says that not making her meetings is not an option.

"Next week I have five flights that I'm on with American. If I don't get where I'm going — I own my own business — I don't get paid," she says.

American has been forced to cancel hundreds of flights, and its on-time performance has collapsed to a little more than 50 percent. The airline says its pilots are to blame.

"We're talking about write-ups for things like broken coffee pots, inoperative passenger reading lights and torn seat pockets that are causing delays. They're calling maintenance out to have those things checked and are causing delays. And those were up more than 34 percent," American spokesman Bruce Hicks says.

In 2003, with American on the verge of collapse, the pilots, mechanics, ground crew and flight attendants gave back nearly $2 billion in concessions. Later, it emerged that the airline's top managers quietly awarded themselves millions in bonuses, and tens of millions more when they retired. The workers have never really gotten over that betrayal.

"The history is the history," Hicks says. "The fact is that all of our labor groups and management and non-union groups in 2003 made significant concessions to keep American Airlines out of bankruptcy. And we worked very hard to stay out of bankruptcy, but in fact we lost $10 billion over the next 10 years — $10 billion."

On Wednesday night, it looked like there was progress. The pilots met and voted to go back to the bargaining table. After all, they've been without a contract since 2003 and are still working at their 1993 pay rates. But after the vote, a letter arrived from American management threatening to take the union to court if the pilots didn't stop delaying flights.

"Within 24 hours of being invited back to the bargaining table by this management team, they fired off a letter that essentially threatens legal action against the pilots," says Tom Hoban, who flies a 777 for American and is an officer in the union. "In that regard, it's like a baseball bat with an olive branch wrapped around it, and they just hit us up the side of the head here. It just doesn't make any sense."

Now the pilots are furious; they see executive duplicity once again. And as of Thursday afternoon, they're not going back to the bargaining table. Instead, they're meeting with their lawyers about management's letter.

"This corporation has taken this airline from first to worst. There simply is no faith in the current leadership of this management team, which is why we're pressing hard for a merger with US Airways and a change in leadership," Hoban says.

And what's American Airlines customer Pat Henneberry going to do?

"I won't happily go back at this point. I have lived through a few of these with American Airlines. And to be honest, I'm having an incredible experience on Delta. You know, I have to do business," she says.

Delta Airlines has cleverly matched the platinum status Henneberry has with American. So while American management fights to the death with its pilots union, its best customers are wandering off.