Accessibility links
Easy Money May Boost Economy But At What Cost? Central banks in the U.S., Japan and Europe are easing credit, putting more money into the global economy. Some economists see these actions as necessary and appropriate. Others warn that it may actually restrict the flow of cash. 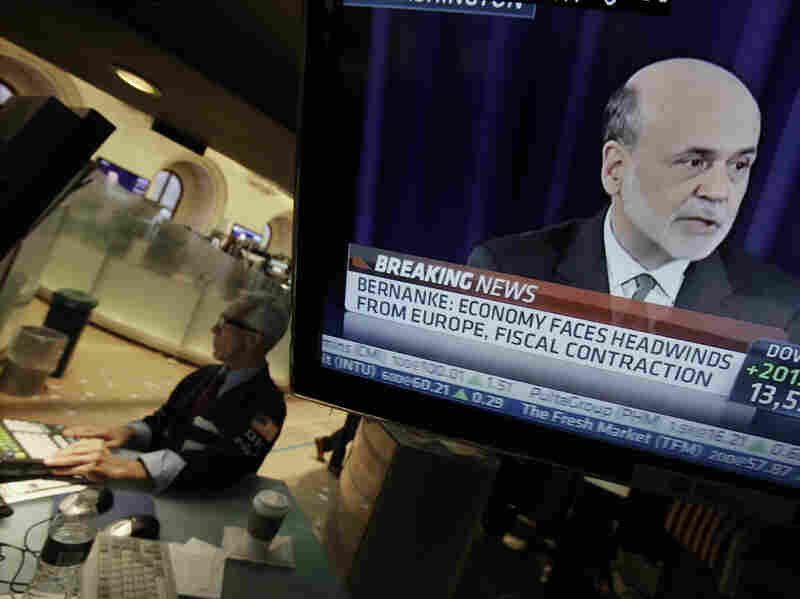 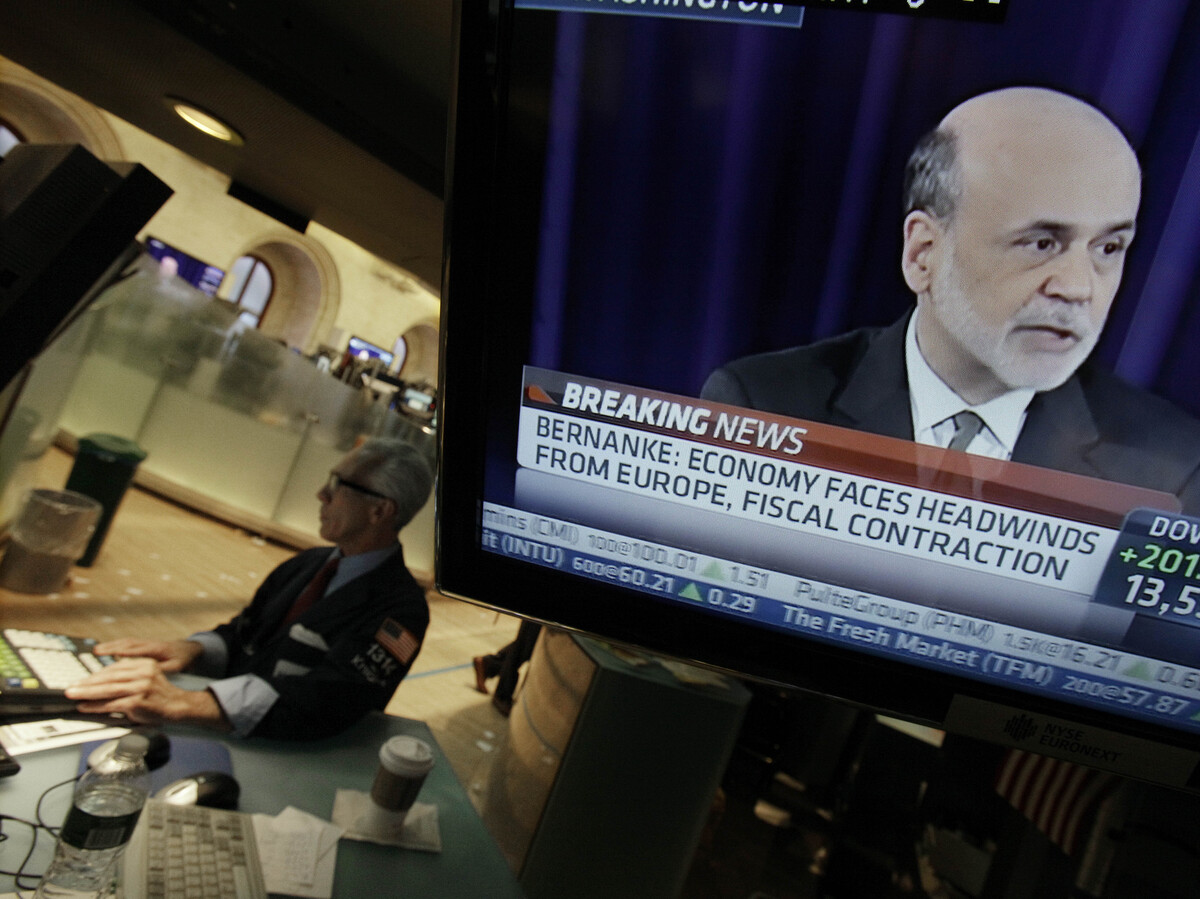 Specialist David Pologruto works at his post on the floor of the New York Stock Exchange on Sept. 13, as Federal Reserve Chairman Ben Bernanke holds a news conference in Washington. The world's central banks are easing credit, putting more money into the global economy.

The world's central banks are pumping cash into their economies, pushing down interest rates in hopes the ready cash and lower rates will boost borrowing and economic activity. Everyone agrees the action is dramatic and unprecedented, but there's disagreement over whether they will do more harm than good.

Economists know very well the trillions of dollars being added by the central banks to the global economy can be risky.

"These are risks about long-term rises in inflation, housing bubbles potentially building up," says Jacob Kirkegaard of the Peterson Institute.

Those are the kinds of things that happen when too much money chases too few goods.

James McCaughan, head of Principal Global Investors, says one such response was obvious right after the Federal Reserve announced "QE3," its latest round of stimulus.

"One of the natural reactions was that the oil price went up," McCaughan says. "Now, that's not so good for most economic activity."

He says it's bad for consumers, businesses and job creation.

"It's a perverse effect of something that was intended to improve employment," he says.

But not everyone agrees with McCaughan's analysis, and oil prices have fallen again in the past week.

Harvard economist Ken Rogoff says given the sluggish global economy, he thinks the risk of inflation from too much central bank stimulus is small. And, he says, the potential rewards are worth that risk.

"Yes we don't want to be a banana republic where we have rampant runaway inflation, but make no mistake this is a very risky situation," he says. "The aftermath of the financial crises ... is long and ugly and it could be far from over."

It could take 10 to 20 years to recover fully from the crisis. Rogoff says the massive central bank injections of cash should be seen as an insurance policy against slipping back into recession. The thing that makes the road back so difficult, he says, is the large hangover of consumer and government debt.

You can lower the interest rate by sort of engineering it down to kind of try to get the people downstream to borrow more. But if they're not interested in borrowing, I think you ought be trying to get the bankers to lend more.

Here's one way to think about what's happening: The central banks have filled a huge reservoir with cash; they actually call it liquidity. But it's not having the desired effect, Rogoff says.

"The pool is stagnant, and we're not getting healthy from one part of the economy to the other," he says.

That's because there's a huge dam blocking the flow into the economic river below. That dam is partly made of debt, says Noah Wilcox, president of Grand Rapids State Bank, a small bank in the logging and mining area of northeastern Minnesota.

Wilcox says the debt hangover is blocking the demand for consumer loans.

"You've got a lot of people who are underwater in the homes," he says. "They may want to buy new house or go buy a new car, or do something like that. But the problem is they are underwater, and they just want to sit tight, and that just depresses consumer loan demand."

Consumers are already underwater in debt. Why would they want another loan from the giant reservoir of money the central banks have created?

There are other reasons that central bank cash isn't turning into loans that could boost the economy. Uncertainty about the outcome of the election and the fiscal cliff has businesses paralyzed, Wilcox says. He also says the Fed has pushed rates so low it's much harder for banks to make a profit.

"It's definitely less profitable for us to make loans today," he says.

Indeed, the difference between the interest rate the bank pays the folks in Grand Rapids, Minn., for their deposits, and the rates it can charge for business and home and car loans has narrowed. That reduces the incentive for banks to lend, says Peter Fisher of the Wall Street financial firm BlackRock.

"How hard are the bankers going to work lending?" he says. "You can lower the interest rate by sort of engineering it down to kind of try to get the people downstream to borrow more. But if they're not interested in borrowing, I think you ought be trying to get the bankers to lend more."

If you keep pushing rates lower, Fisher says, you discourage lending. It's just not worth the risk of giving someone a loan if your return is too low. In fact, Fisher says he believes the most dangerous unintended consequence of the Fed's low rate policy is that instead of boosting lending and the flow of money through the economy, it's restricting the flow.