Accessibility links
In Presidential Ads, A Shared Strategy For Connection In new ads from President Obama and challenger Mitt Romney, the candidates talk directly to the camera. Obama is also putting out longer television spots. Why the change of style? 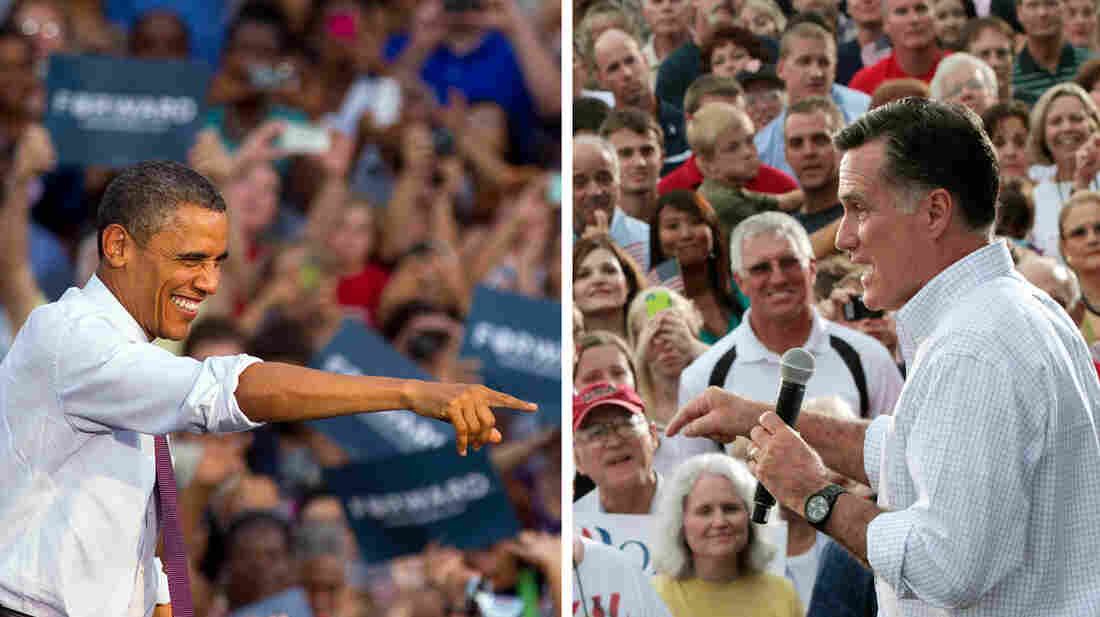 This week, the campaigns of both President Obama and Mitt Romney released new TV ads in battleground states that feature the candidates speaking directly to their audience, by looking straight into the camera.

Mitt Romney speaks directly to the camera about Americans who are being hurt by the economy.

The Romney ad appears to be the candidate's response to the infamous "47 percent" fundraising video, in which Romney is captured by a hidden camera saying that those who don't pay income taxes are victims who are dependent on the government. In the response ad, Romney is sitting in a room, wearing a checked shirt.

The Obama campaign has been running its own take on the 47 percent remarks. Its ad, airing in battleground states, uses audio of Romney's remarks under pictures of moms with children, aging veterans and factory workers.

This Obama ad, airing in several battleground states, uses audio from Mitt Romney at a fundraiser, where he was surreptitiously videotaped.

"You can hear the clink of the silverware, of the china, while Romney makes his comments. And this ad juxtaposes those sounds against really crisp, close-up images of Americans — Americans who are presumably part of this 47 percent. It is very well done and very effective," Freedman says.

In a two-minute ad the Obama campaign released this week, the president, sitting in his chief of staff's office, delivers what is essentially a condensed version of his stump speech.

"It's time for a new economic patriotism, rooted in the belief that growing our economy begins with a strong, thriving middle class," Obama says in the video.

In this ad, as in the Romney spot, the candidate is talking directly to the camera. Victoria DeFrancesco Soto, a fellow at the University of Texas, says both candidates are trying to make a connection.

"The eyes are the windows of the soul, and it's really a way of focusing in on the personal relationship that the candidate wants to forge with that voter," DeFrancesco Soto says.

She says it's a connection that's particularly important for Romney to make in the wake of the damage done by the 47 percent video.

"This is why we see Romney really struggling to make that eye contact literally with the voter and saying, 'Those comments, they were taken out of context. I really do care for you. Look at me. Look at the man. Look at Romney,' " DeFrancesco Soto says.

And while the Romney ad and the longer Obama spot each have the feel of candidates making their closing arguments to voters, with over a month until Election Day, it's certain there will be many more spots to come from both campaigns.