Accessibility links
'I've Been Everywhere' Turns 2 Hours Into 50 Years Of Pay The song has been a hit for a string of American country stars, but it was written by an Australian. Inspired by road maps and towns that rhymed, Geoff Mack set to work on song that became a classic four times over. 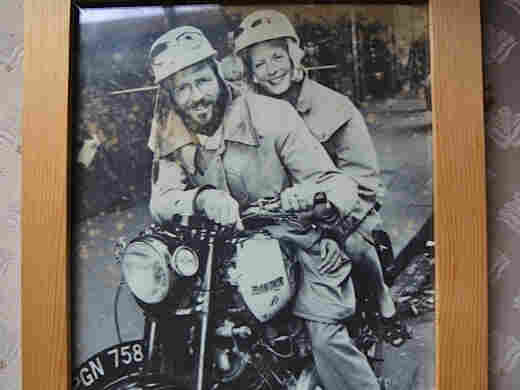 Geoff Mack, who wrote "I've Been Everywhere," and his wife, Tabby Garmisch, take to the road. Hal Cannon hide caption

The song "I've Been Everywhere" was a hit for a string of country stars: Hank Snow in 1962, later Lynn Anderson, then Asleep at the Wheel and Johnny Cash. An all-American classic, right? Think again.

It was actually an Australian who, 50 years ago, wrote the song while trying to come up with a new opener for his act.

"At that time, 1959 it was, there were a lot of tasteless rock numbers on the radio, and I thought, aw crikey, I should write one," Geoff Mack says.

He was in a van, looking at the road maps, and noticed that a lot of the towns' names rhymed. A song was born.

"So I came back to Sydney, and I did it around the club for a while, and that's all it was,' he says. "I never thought anybody would be the least bit interested in it."

Then one night, he heard Leslie "Lucky Star" Morrison singing his song on the radio.

Festival Records asked him to write other versions, with town names in America, New Zealand and England.

"The English one was easy because I could almost do that without an atlas. The American one, I needed an atlas and a magnifying glass," he says. "Two hours work, and I'm still living on it 50 years later. How lucky can you get?"