Accessibility links
Online Education Grows Up, And For Now, It's Free Top universities are embracing free online education. Dozens of schools, such as the University of Pennsylvania, are now offering classes to thousands of people across the world. But what will this mean for the future of the classroom, and the brand of the universities involved? 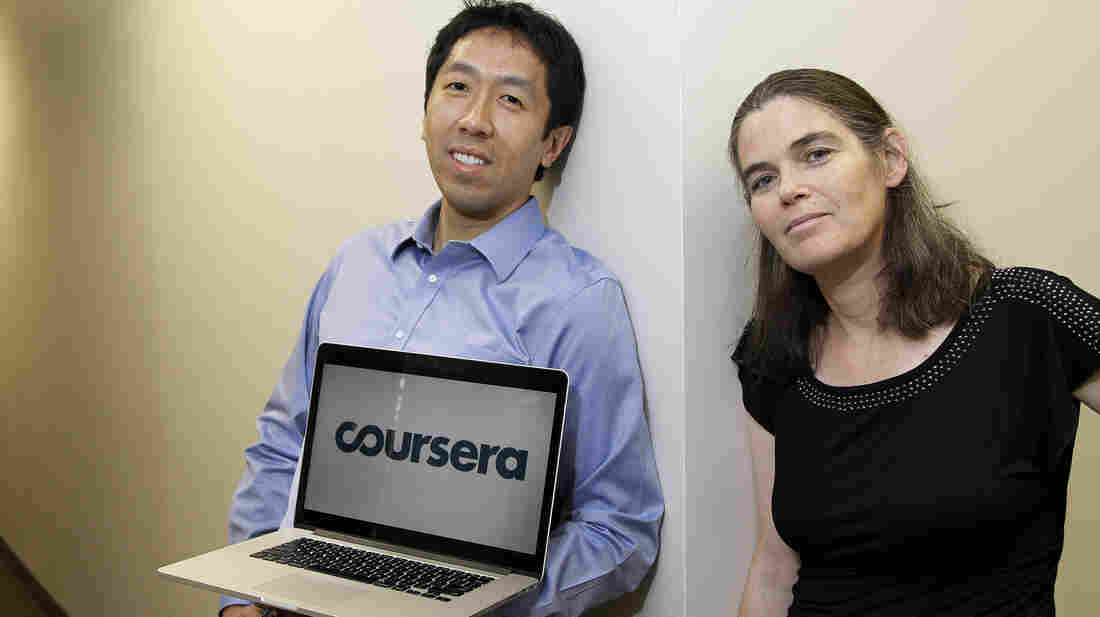 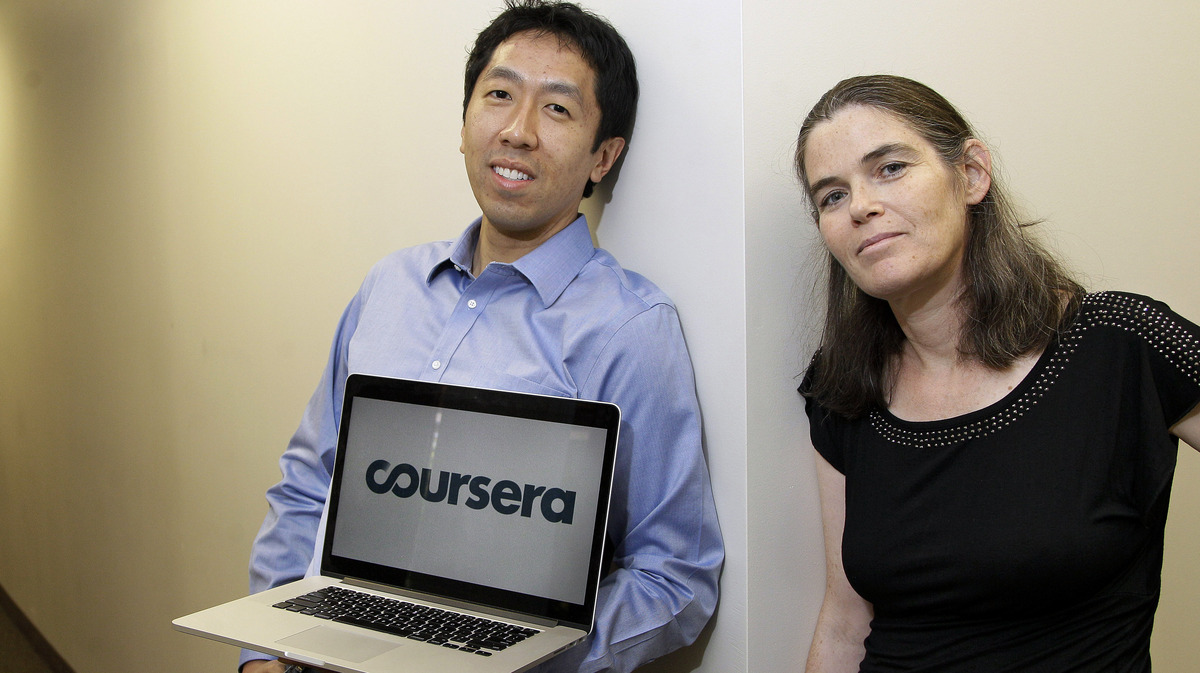 Online education isn't particularly new. It has been around in some form since the 1990s, but what is new is the speed and scale in which online learning is growing.

In barely a year, many of the most prestigious research universities in the world – including Stanford, Caltech, Oxford and Princeton — have started to jump onto the online bandwagon.

For the students who never, ever would have had access to this kind of quality education from a place like Penn or Princeton or Stanford, they now have access to something.

Those universities now offer classes through consortiums like Coursera, a tech company that's partnered with more than 30 of the top universities in the world to offer online classes from its course catalogue — for free. Other companies offering online courses include Udacity and edX.

"The problem is our university is relatively small, it has about 2,000 students, and we didn't have [Artificial Intelligence] classes in the syllabus," Murzabayev says.

So Murzabayev went online to Coursera and enrolled in Stanford's Machine Learning class for free. He watched the lectures, did the quizzes, joined online discussions with students from around the world and then took the final exam. He passed, and when it was over he received a certificate that said he completed an online course at Stanford.

Murzabayev used that certificate to apply for jobs; offers started to pour in. One of those offers was from Twitter, and he now works for the company in the Kazakhstan's largest city, Almaty.

Murzabayev is now one of 1.5 million students who have enrolled in one of the classes offered by Coursera since it launched earlier this year. Initially, only about a dozen courses were available, but the site now lists close to 200 classes from 33 universities.

Koller tells Guy Raz, host of weekends on All Things Considered, that in five to 10 years, people are going to look back and wonder why universities ever crammed 500 students into an auditorium to listen to a lecture for an hour and a half. But she also says brick-and-mortar campuses will still have a place.

"I think it's important to also remember that the role of physical institutions will still be important," Koller says. "There's still certain aspects of that experience that we can't currently replicate in an online format."

While students aren't earning actual degrees through Coursera, Koller says they are getting an education that has value. She also says that education shouldn't just stop when you get a degree.

"If you can take the lecturing part and take it out of the classroom, all of a sudden you've opened up room for much more interactive engagement that can happen in the classroom," she says.

Coursera is a for-profit company with $16 million in venture capital behind it. Eventually, it will look to turn a profit for those investors. Koller says one way might be to charge a fee for certification. Another, she says, is to help employers and organizations to close skills gaps.

"Even though there is rampant unemployment in many parts of the world, there are still large numbers of jobs that are going unfilled because employers are having a hard time identifying people with the right set of skills," she says. "So by matchmaking, employers would basically help support this effort."

Where they are succeeding most, Koller says, is in improving the experience for all tiers of education: those in the university classrooms, students online and especially for those who would otherwise be without access to education.

"For the students who never, ever would have had access to this kind of quality education from a place like Penn or Princeton or Stanford, they now have access to something," she says. "It's not the same as the experience of the on-campus students, but it's a heck of a lot better than what they had before."

The Change In The Classroom

The University of Pennsylvania is one of Coursera's partner schools. Law professor Ed Rock, who also coordinates UPenn's online program, says he thinks everyone now realizes tech is going to change universities.

"The choice that faced Penn when we were approached by Coursera," Rock says, "was do you want to be part of that conversation; do you want to shape how technology is going to shape universities; or do you want to just hide your head and pretend it is not going to happen?"

"If we had tried to do this 10 years ago, there would have been major pushback," he says. "I think now everyone recognizes that the Internet changes everything, and the question is how does it work for us, how does it fit with the Penn mission?"

One goal of these online education consortiums is to democratize education to find the next Bill Gates or Mark Zuckerberg in rural India or sub-Saharan Africa. The other part of it is about money, and how to find a revenue stream for universities that can't possibly accommodate a million students at a brick-and-mortar campus.

Professor Michael Kearns teaches a popular class at the University of Pennsylvania called Networked Life. During a recent lecture, he used a tennis ball and the students in the class to demonstrate the idea of six degrees of separation.

Now there were only about 100 students in the class, but thousands of miles away, in any direction, more than 40,000 students are also taking the online version of Kearns' course.

The class is designed to be taken over a period of 10 weeks and the online lectures last on average about 12 minutes. There are readings and quizzes and online discussion boards, and once you've finished, you qualify for a certificate of completion that is already worth full course credit at the University of Helsinki in Finland.

This could, quite possibly, come to be seen as a calling card to better jobs in countries around the world and change the way universities operate 10 to 20 years down the road, Kearns says.

He says that it's unlikely that places like Stanford, Penn or MIT won't exist in another 10 to 20 years because of online content and education.

"[But] do I think access the access to courses taught by institutions will be widespread, pervasive and accessible to a much larger audience? Yes," he says.

Kearns says he thinks institutions will change the way they teach in the classrooms because of the availability of the content. He says those universities will still be around, but perhaps professors will spend much less time droning on at students in a passive way.

"Because why wouldn't you just as easily watch the video?" he says.

Right now, each course costs the universities about $50,000 to put online, and that includes a small stipend for the professors. But in the future, nominal fees could make these offerings a lucrative possibility.

Now there are still many kinks to be worked out, how to make sure no one is cheating, for one thing. Another is how to evaluate essays; right now, most of the testing is still multiple choice.