Accessibility links
Ole Miss Students Look Back At Integration Fifty years ago, James Meredith, the first black student at the University of Mississippi, had to be escorted by federal marshals to his mostly empty classes. Today, black and white Ole Miss students sit together in a class about the school's integration. Still, students say there's more to be done. 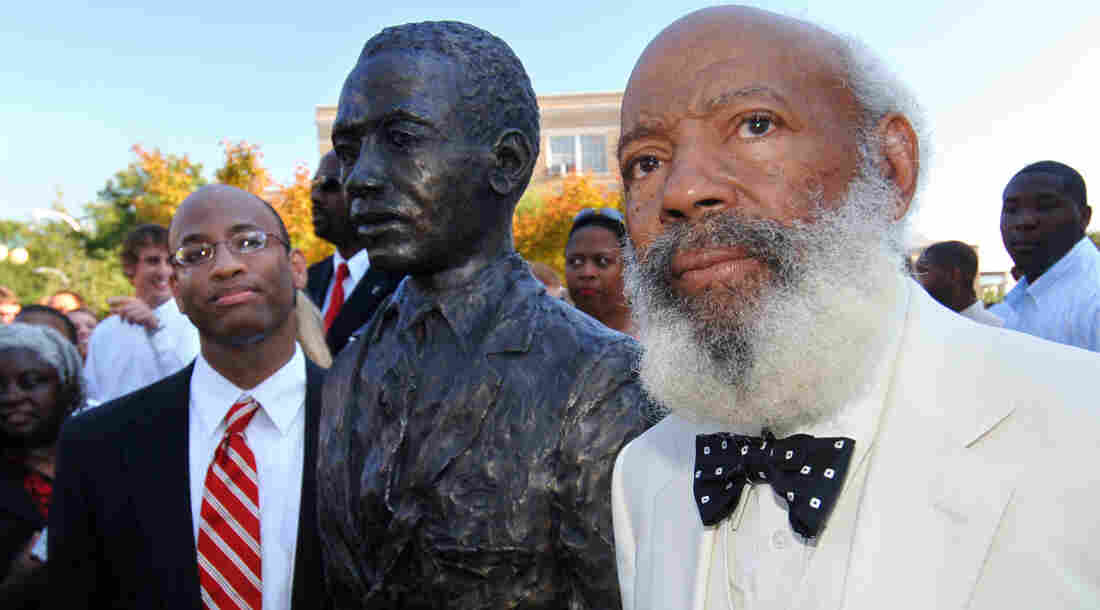 James Meredith at the University of Mississippi in 2006, as the school dedicated a bronze statue in his likeness on campus. Robert Jordan/AP hide caption

Fifty years ago, James Meredith, the first black student at the University of Mississippi, had to be escorted by federal marshals to his mostly empty classes. His enrollment came after a standoff between state segregationists and the federal government that led to a deadly riot on the Oxford campus.

Today, black and white juniors and seniors at Ole Miss sit together around a table in an Honors College class on the school's turbulent history. The course is called "Opening the Closed Society," and is an in-depth look at the integration of Ole Miss.

Journalist Curtis Wilkie, who is white, was a senior at Ole Miss during the riot. He teaches the course with a younger black political science professor, Marvin King. King says teaching around this pivotal moment shows students the broader implications of the battle here.

Wilkie tells the students that 50 years ago, no one knew what would come of the standoff. 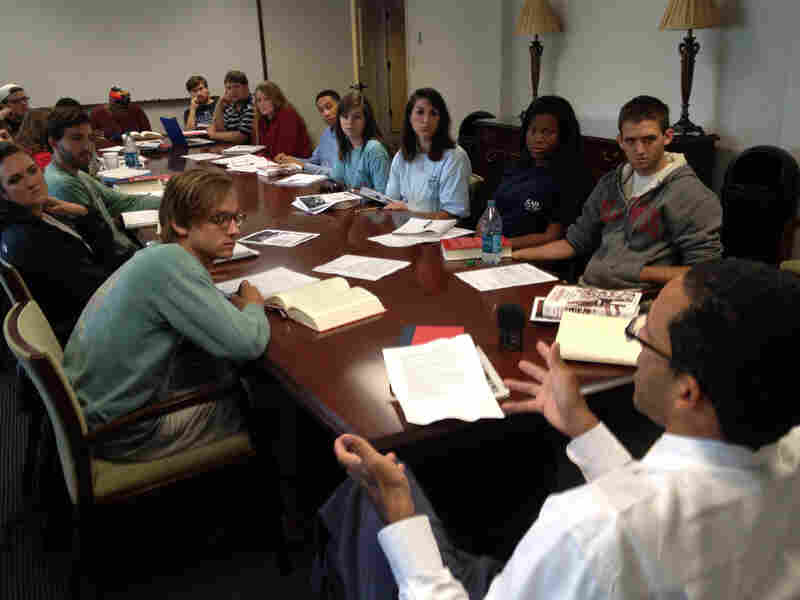 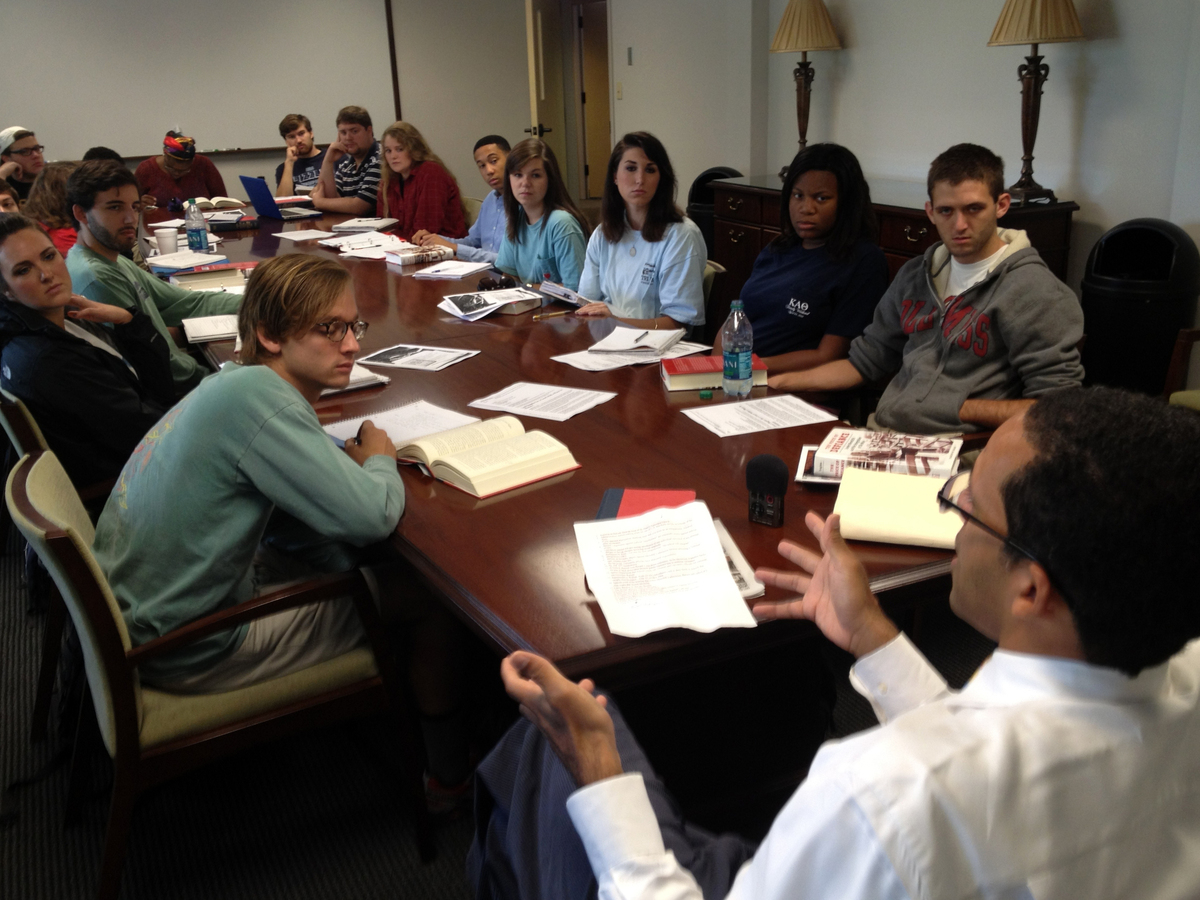 "I thought, as a student, that there was a possibility the university would be closed. There was even thought that Mississippi might try to secede from the union again. That was how intense the situation was," Wilkie says.

Learning about the intense resistance to desegregation before they were born sparks conversations about what the students have experienced in their own lives. Zack Huffman now looks differently at racial practices from his high school.

"I never really thought about until now, this conversation, but I remember having a separate white and black homecoming queen," says Huffman.

After class, Wilkie says that kind of dialogue is what talking about the past can foster.

It's been unfortunate that we've been so resistant to the change. That's almost an Ole Miss tradition: We resist change.

"If we're not willing to confront race and deal with it, especially in a place like Mississippi, we've got problems," he says. "So, this is an opportunity, obviously in an integrated class, to deal with some issues that may be a little uncomfortable, but I think most of the students are willing to thrash it out."

Indeed, as the class breaks up, Claire Douglas of Nashville asks why no one talks much about the segregated Greek system on the Ole Miss campus.

Neil McMillan is a member of an all-white fraternity, and finds it troubling.

"My fraternity, the Kappa Alpha Order, is the one most closely associated with the Old South. And that is something that, I think it bothers a lot of us," McMillan says. "I think it makes us reflect on how we bear ourselves, how we show that we aren't defined by the past."

Students are confronted with symbols of the Old South daily, says Hardy DeLaughter of Biloxi. School officials have tried to curtail the use of Confederate battle flags at sporting events, and replaced the controversial mascot Colonel Reb. But DeLaughter says there's push-back.

"People say, 'Oh yeah, that's a symbol of the old way, of our roots; we don't want to get rid of that,' " DeLaughter says. "And it's been unfortunate that we've been so resistant to the change. That's almost an Ole Miss tradition: We resist change."

Even the university's nickname — Ole Miss — harkens back to different times, and a connotation that student Daniel Roberts says most of his peers were unaware of.

"I just assumed it was something along the lines of Old Mississippi, or something like that, and just the Southern dialect threw it off. But come to find out that it's more of something that's associated with the colonial era of Mississippi," Roberts says. "Apparently, allegedly it came from the plantation owner's wife. ... That's how the slaves referred to her, as Ole Miss."

Roberts, who is black, and Douglas, who is white, both say that's not what Ole Miss means to them today. They are proud of strides made on campus. The student body president is a young black woman. And African-American enrollment is at a record high 16 percent of the student population.

Still, Kaitlyn Barton says students are not as comfortable with each other as you might expect 50 years after the wall of segregation came down. Just take a look at the student union, she says.

Student Hope Owens-Wilson says it can be daunting for black students to find their place here.

"Still there's kind of an indescribable atmosphere on campus that's alienating to students of color, which is difficult to explain. And it's often hard to talk about, because it is a kind of unpleasant thing to mention, especially during the 50th anniversary. But it's definitely something that, as we progress as a university, it needs to be aware of," Owens-Wilson says.

As for James Meredith's legacy of integration, Owens-Wilson says: "I don't think it's done. We still have a ways to go, so definitely there's more work to be done."

But, she says, courses like "Opening the Closed Society" can keep the focus on making the University of Mississippi a more open campus.