Accessibility links
No More 'Lying': Law Bolsters Transgender Argentines Argentina recently passed a law that recognizes the right of transgender citizens to change the name and sex written on their ID cards and other documents, with no medical or legal procedures. Other countries have similar measures, but Argentina's law sets a new standard for making the process easy. 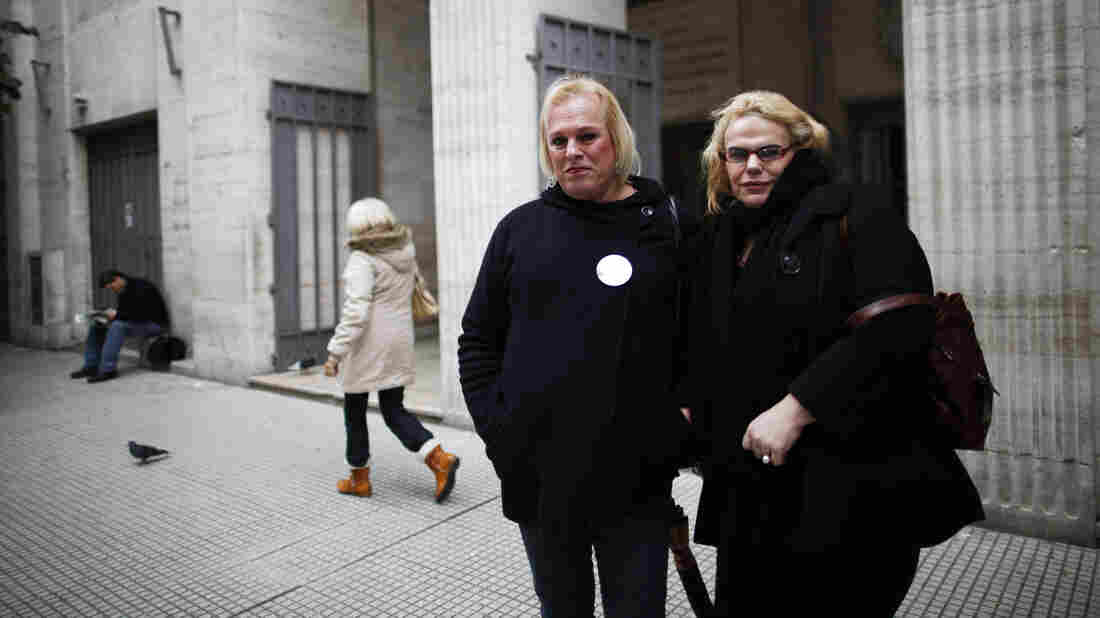 Mateo Solares came to Argentina from Bolivia a few years ago. The 25-year-old was born, and grew up as, Moyra Veronica. Biologically female, Solares says he always felt like a guy.

The main reason Solares moved to Argentina is because it seemed like an easier place to transition into a life as a young man. He says having an ID card that reflects how he sees himself is huge.

"Before, it felt terrible to see documents that didn't identify me as me," says Solares. "And those documents make you feel afraid. If I had to buy anything, I'd only do it if I could pay in cash, because if I paid with a credit card I'd have to show my ID. ... It was like I was lying. It was horrible."

In other countries, like Bolivia, changing your name and gender on ID cards often requires medical procedures or making a case before a judge, and it can take years. But in Argentina, because of the new gender law, the change is simple and takes only 15 days. Under the law, if a person wants to have a medical procedure, like gender reassignment, the health care system will cover it.

Psychologist Graciela Balestra, who works closely with the transgender community, says it's an especially vulnerable population.

"Transgender people have an average life expectancy of about 30 to 32 years," Balestra says. "They don't live any longer; I think that statistic alone says so much."

Balestra says that they are often kicked out of their homes as teenagers and don't complete school, and that some use risky homemade remedies to change their bodies, when hormones and surgeries aren't available.

According to a government study, more than 95 percent of transgender people turn to prostitution to support themselves. Balestra says the new ID cards are helping people access other jobs.

At a recent meeting to plan this year's Pride parade, Marcela Romero, the president of ATTA, a transgender advocacy organization in Argentina, recalled the protests during the 1970s dictatorship.

"I was detained by the military dictatorship, and I've always dreamed of really experiencing democracy," says Romero. "None of the governments that followed the dictatorship ever included us in their agenda. With the Kirchner government, we had our first meetings and were finally able to discuss our needs."

Also at the meeting was Daniela Ruiz, who used to work as a prostitute but now heads a theater organization. Ruiz has applied for a new ID card, and expects to get it back any day. She's happy, but to her it's the name that counts — that it says "Daniela." As for gender, she feels fluid about that.

"It's not so much about feeling like a woman," says Ruiz. "What I feel like is a transgender person, and I feel great about being trans. Society has this thing about labeling people 'feminine' or 'masculine,' but what happens if I want to be feminine and masculine at the same time?"