Accessibility links
Presidential Campaigns Rock The Gamer Vote As political ads ramp up on TV, a newer platform is also seeing a spike in political messages. In 2008, Barack Obama became the first presidential candidate to use political advertising in a video game. This year, the Romney campaign says it is also injecting politics into gaming. 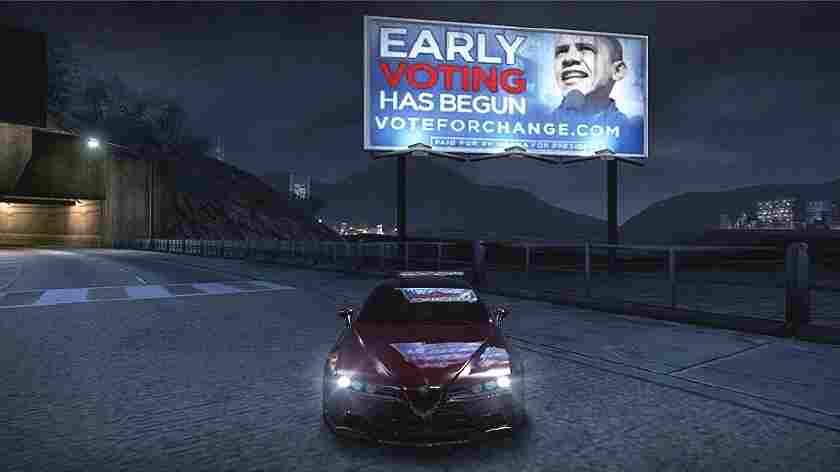 An advertisement for then-presidential candidate Barack Obama appeared in the Xbox 360 Live version of the video game Need for Speed: Carbon in 2008. Again this year, Obama is advertising in video games. AP/Electronic Arts Inc. via Obama campaign hide caption

Let's say you're pushing 115 mph on the highway, racing neck and neck with a Chevy Camaro — in an online video game, of course.

Right as you're pulling into the lead, you notice a billboard pop up on your TV screen. Early voting has begun? Voteforchange.com? Whoa, keep your eyes on the road!

This is Need for Speed: Carbon, one of 18 games that the Obama campaign advertised in during the 2008 campaign. This year, President Obama is back at it, running ads in Madden NFL 13, on the free online game site Pogo.com, and in mobile games like Tetris.

As political ads ramp up on TV, video games are also seeing a spike in political messages. But it's not just the president who's injecting politics into game consoles.

A spokesperson for Republican presidential nominee Mitt Romney said his campaign has advertised in video games as well, but did not provide any examples or information about the ads. 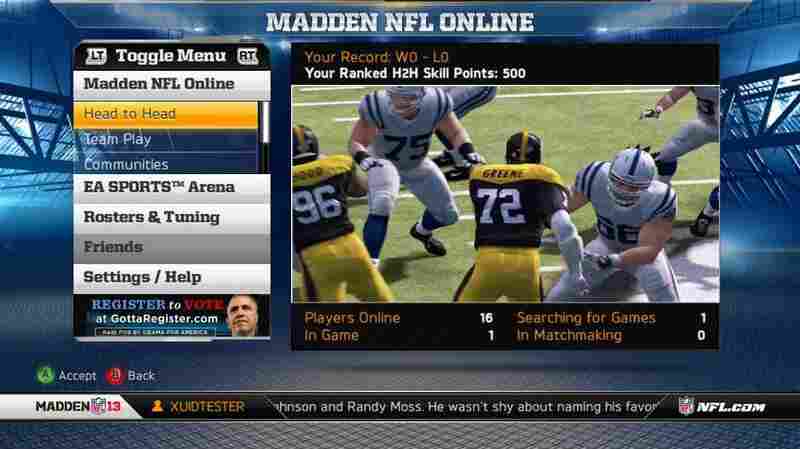 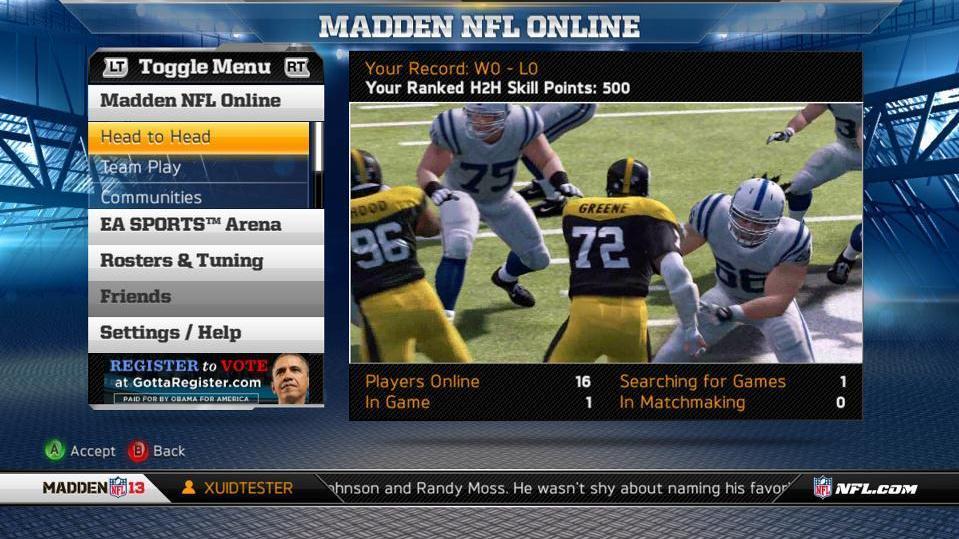 Video game makers and websites can sell space on their virtual billboards or on banners on the side of the screen. The game is online, so these ads can be updated.

Political advertising only makes up a small percentage of all ads in games, but during an election season, campaigns can grab the eyeballs of video game junkies like Tommy Mullings.

When a big new game title like Madden NFL is about to go on sale, "I'm always waiting at midnight for it, and I'm like one of like a hundred people usually that's sitting in there," Mullings says.

And he'll play that game over and over again, until another big title comes out. For campaigns, Mullings' devotion to a game is very attractive. He'll see that ad again and again the more he plays. So Mullings must see political ads all the time, right?

"I've never seen a political ad or anything," Mullings says.

The information that gamers give up when they register for an online service makes them easy targets, says Indiana University's Patrick Walsh, who studies political ads in video games.

"Signing up for any service, they're going to ask you your name, gender, location, address, those types of things," Walsh says. "So you can be really targeted with the technology."

So campaigns that want to reach young males in Ohio might do better buying space in Madden than during The Ellen DeGeneres Show.

One Way To Avoid Political Ads: Watch 'Dancing With The Stars'?

Nowadays, the average gamer is 30 years old, according to a 2012 study by the Entertainment Software Association.

In-game advertising isn't the only way politics is making it onto game consoles. In late August, Xbox launched its 2012 Election Hub, an interactive platform that lets users learn about the candidates and keep up to date with the race.

Jose Pinero, a senior director at Xbox Entertainment, says presidential debates will be broadcast via the Xbox console, and Xbox users will be able to vote and rate the candidates' performances.

Xbox is also hosting voter registration efforts by teaming up with Rock the Vote, an organization that registers young voters.

"When you look at the numbers of people who are using their Xbox consoles or are playing video games, it's huge," says Chrissy Faessen, a spokeswoman for the organization. "And if there's an opportunity for us to reach out to those individuals as well, and make sure they've got the information they need to participate, it's a win-win for everybody,"

The biggest winner might be the video game industry, a multibillion-dollar beast that could pull more voters to the polls.