Accessibility links
Panic Rises In Iran As Currency Plunges To New Lows Crowds of anxious Iranians are flocking to foreign exchange offices as the rial continues to plummet; it lost about one-third of its value in just a day. Tough economic and banking sanctions, and an oil embargo, are at the heart of the crisis. Tehran is blaming outsiders, and seems unable to stop the free fall. 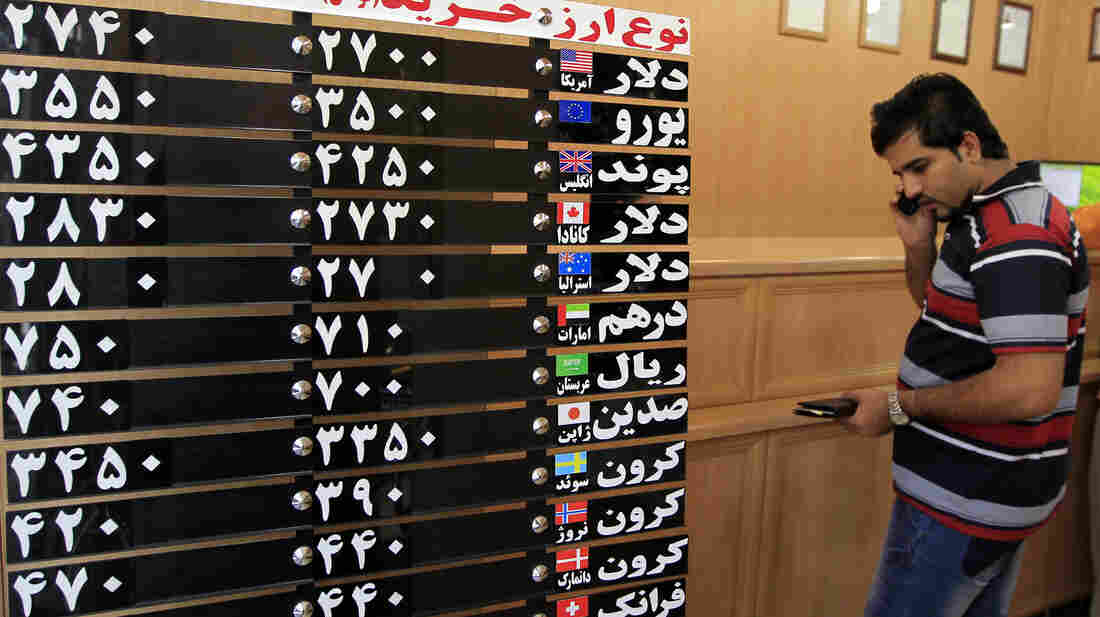 Large crowds of anxious Iranians gathered in Tehran on Sunday and Monday at foreign exchange offices — some of which had shuttered their doors — as Iran's currency continues its free fall.

From Sunday to Monday, the rial lost nearly one-third of its value against the dollar — and the decline appears to have continued Tuesday.

Most economists say it's the very tough economic and banking sanctions against Iran, as well as an embargo on Iranian oil sales, that are responsible for the currency collapse. Iran's government is blaming currency speculators and what it's calling "defrauders."

The currency exchanges closed because traders had run out of dollars, which caused more panic among ordinary Iranians, says Hossein Askari, an expert on the Iranian economy who teaches at George Washington University.

"Cab drivers in Tehran are turning in their rials for dollars, because they say to themselves, it's better that we do it now than wait until tomorrow," Askari says. "And if that mentality takes hold, it's over."

The panic and blame game are adding to the pressure that weakens the rial even more, says Djavad Salehi-Isfahani, a professor of economics at Virginia Tech.

"When a situation like this happens, people who need dollars now will have to buy at a very high rate, because others are basically hoarding their dollars," Salehi-Isfahani says.

It's a self-perpetuating cycle, as well: The more people hoard their dollars — a natural impulse — the weaker the rial becomes, and the more panicked the people become.

Behind The Currency Crisis

The causes of the currency panic seem obvious. As a result of Iran's controversial nuclear activities, it is confronting some of the most damaging economic and banking sanctions ever imposed on a nation, along with a global cutback in purchases of Iranian oil.

At the U.S. State Department on Monday, spokeswoman Victoria Nuland pointed to the currency collapse as clear evidence the sanctions against Iran are working.

"From our perspective, this speaks to the unrelenting and increasingly successful international pressure that we are all bringing to bear on the Iranian economy," Nuland said. "It's under incredible strain."

The Iranian rial has been on a downward path for a year now, and in part the current panic may be of the government's own making. Initially, back in December, the government sought to shut down the free currency trading, but that proved useless.

So the government set up several tiers of foreign exchange centers and allotted dollars to each exchange center based on the importance of the products that had to be purchased in dollars.

No one knows exactly how many billions of dollars the government has for these foreign exchange operations, but it appears that over the past two days, the government provided liquidity to the intermediate market that is meant to finance the import of heavy machinery, and withheld dollars from currency traders who make dollars available to ordinary Iranians, says Salehi-Isfahani.

"The amount of money supplied to that exchange, to that particular market, kind of dried up when the government shifted its dollars from that market to the intermediate market, to the exchange centers."

That caused the panic and the drop in the value of the rial to record lows.

In Tehran, A Blame Game

In a televised news conference, Iranian President Mahmoud Ahmadinejad blamed the collapse on speculators and enemies of Iran. But some prominent government leaders, including the speaker of Iran's parliament, blame the president's own policies and economic decisions.

There is no sign that the pressure of sanctions is going to let up anytime soon, says Askari.

Ahmadinejad has ordered the security services to get involved. That is likely to drive some currency trading underground, but it is unlikely to stop it.