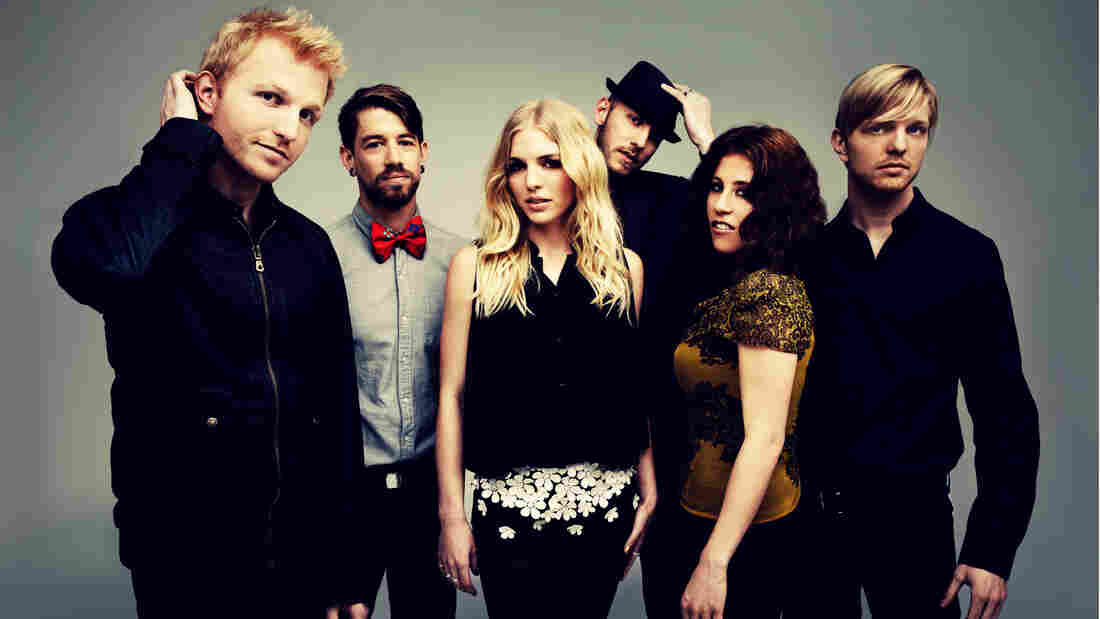 Delta Rae puts a new spin on loss throughout Carry The Fire. Smallz and Raskind/Courtesy of the artist hide caption

toggle caption
Smallz and Raskind/Courtesy of the artist

Love songs are like the meat and potatoes of most rock and pop music, but sometimes you need something different. For the band Delta Rae from Durham, N.C., inspiration for new material comes from stuff like graveyards and being stuck in the wrong job.

Delta Rae is a six-piece band that includes three siblings: Ian, Eric and Brittany Holljes. Their music is like a kind of modern folklore.

With Brittany Holljes' bluesy roar, the insistent refrain "Hold my hand / It's a long way down to the bottom of the river" recalls those ominous old folk songs about a murder or an unfaithful wife. The video for "Bottom of the River" looks like a witch trial, with a young woman being marched down a dirt road by an angry mob.

Erin Williams of The Washington Post says the haunting vibe works for Delta Rae: "The chains in the background, the chanting. It's just great," Williams says. "They can evoke ideas of gospel and blues and rock, and put it all in there and create this amazing sound that really works for them."

The Holljes siblings grew up hearing stories of mythology and the supernatural.

"My mom loves folk tales," songwriter Ian Holljes says. "She would read Greek mythology to us and the Narnia books." He says there were often songs in the stories: "And she would just make up melodies."

Their mother's made-up melodies left a huge impression. Ian and Eric Holljes say they started writing songs when they were 12 and 10, respectively. When the family lived in California, Ian, Eric and Brittany joined a teen a cappella group called 'Til Dawn. That's where they became friends with the fourth singer in Delta Rae, Liz Hopkins.

Vocal harmonies are a signature feature of Delta Rae's material. "Country House" is like a meditation on the word "lonesome," wherein the singers repeat and stretch out the word in a way that emphasizes the feeling of loss. It's inspired by the year Ian Holljes spent taking care of his former college professor — the North Carolina writer Reynolds Price — who was paraplegic. He passed away around the same time that the Holljes siblings' grandfather died.

"That word 'lonesome' was really interesting to me," Ian Holljes says, "because it tied together the whole experience, both of the grandfather dying alone, meeting the end by himself, and then family mourning his loss."

The theme of losing someone gets a completely different treatment in another song, "Dance In The Graveyard" — a reference to what Ian Holljes says he wants to do with his friends and family who've died.

"Reynolds Price, or friends from high school who've passed — they were wonderful parts of my life," he says. "For me, they're not resting in peace. They're very vivid. They still move me and influence me, and I'm still dancing with them."

Delta Rae is currently on a national tour. Other songs on Carry The Fire are inspired by the years the Holljes siblings' father was unemployed, their relationship with their hometown of Durham and, yes, finding and losing love, as few pop groups can completely avoid that.