Accessibility links
Movie Review - 'The Oranges' Appeal - Not Your Average Suburban Holiday Julian Farino's dramedy The Oranges is another riff on the cataclysmic holiday weekend — but critic Ella Taylor says the film's ensemble cast and its lack of cynicism bring freshness to a genre that can feel as stale as a fruitcake. (Recommended) 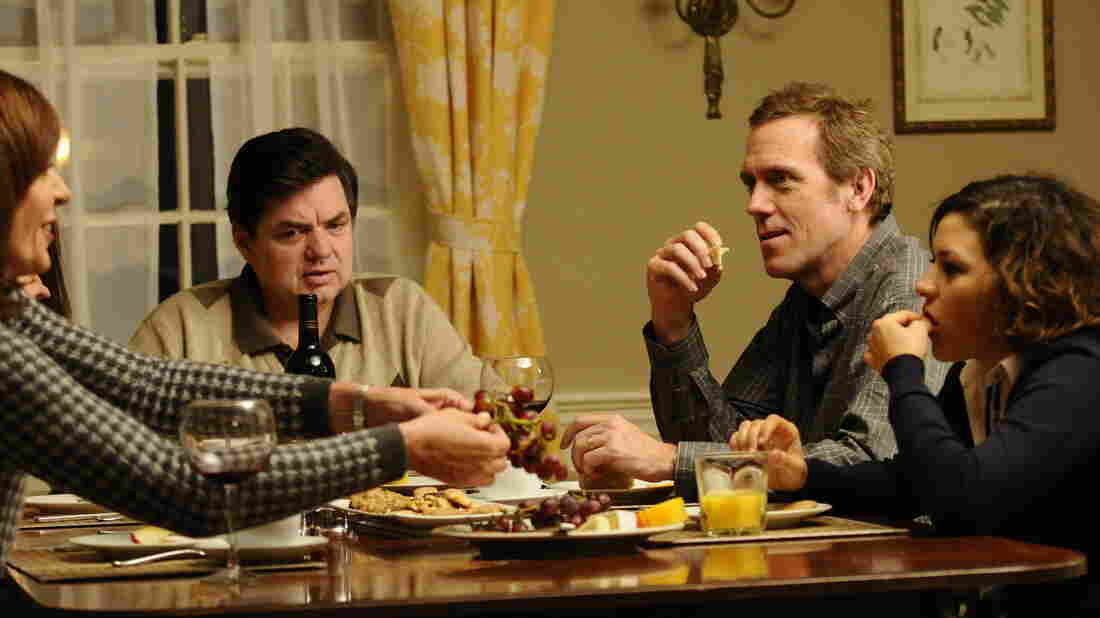 The Ostroffs (Allison Janney and Oliver Platt) and their good friends, the Walling family (Hugh Laurie and Alia Shawkat), are shaken when the Ostroffs' daughter comes home for the holidays. Myles Aronowitz/ATO Pictures hide caption 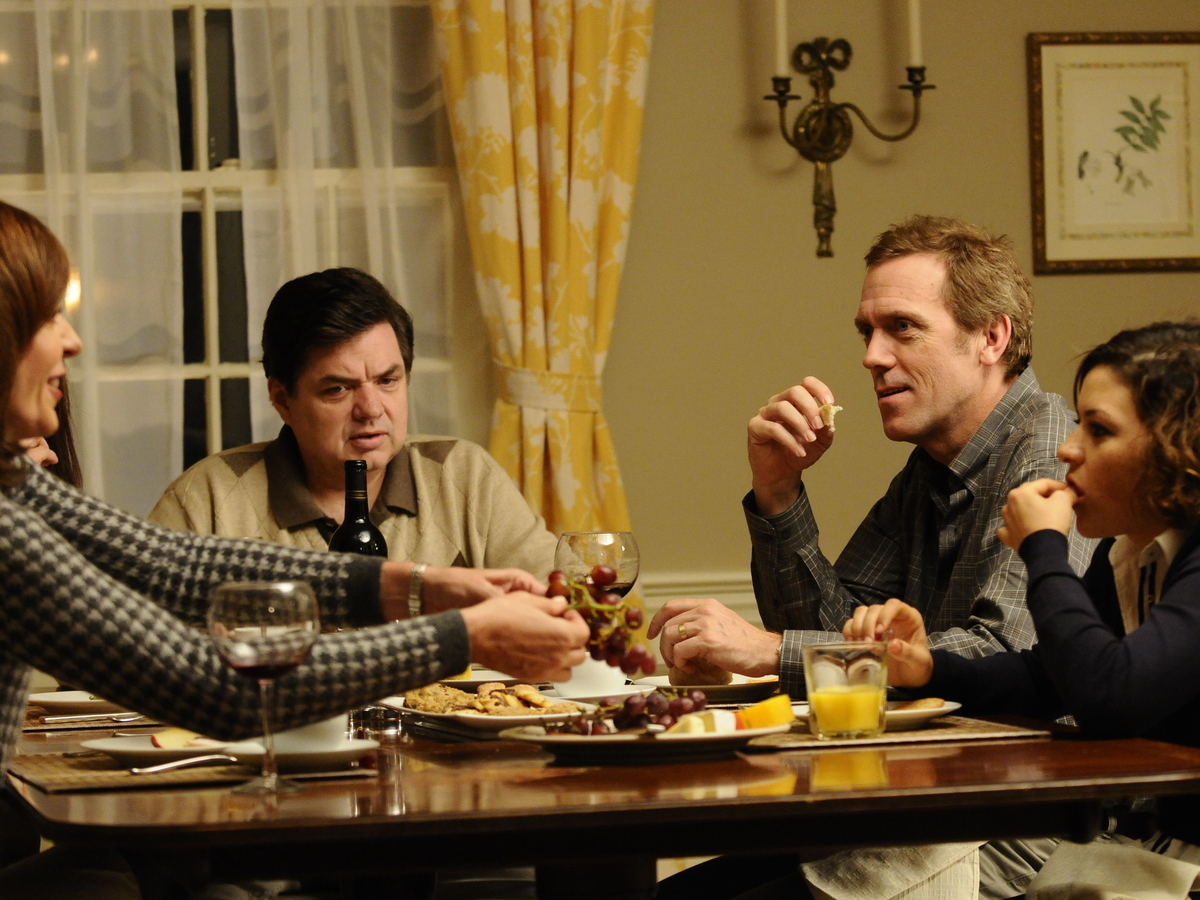 The Ostroffs (Allison Janney and Oliver Platt) and their good friends, the Walling family (Hugh Laurie and Alia Shawkat), are shaken when the Ostroffs' daughter comes home for the holidays.

Rated R for language including sexual references, and some drug use

Dang if Home for the Holidays season hasn't rolled around again — that jolly time of year when screenwriters dust off childhood memories of mildly distressed families and distress them further for our sentimental education. Yet if it seems a little early-autumn yet for that sort of thing, please welcome a surprisingly superior specimen of the genre, courtesy of the best indie ensemble money can buy.

The Oranges unfolds over Thanksgiving, which if nothing else leaves ample room for a family to self-immolate in time for Christmas. We've seen that a million times, right? So give thanks that this low-key dramedy is nothing like that noisy Jodie Foster thing with Robert Downey Jr. — or any other of the strenuously wackadoodle convocations of dope-addled young-adult losers, alcoholic parents and leery old uncles coming together in dysfunction, only to melt into healing harmony. This is something quieter and darker.

At first blush the two couples — they live on one Orange Drive, somewhere in suburban New Jersey — seem like model citizens who get along well enough, if without passion. Good Americans that they are, the Wallings and the Ostroffs spend a lot of time talking about happiness, but long habit and quiet desperation have set in and stopped them from pursuing it, whether alone or together.

In the hands of such accomplished actors, the Oranges are hardly nuts in the facile sitcom sense, but they are a codependent apple cart waiting to be upset. Obligingly, Terry and Cathy's pneumatic prodigal daughter Nina (Gossip Girl's Leighton Meester) surprises them with a rare visit in the wake of a broken engagement. Neatly sidestepping David and Paige's eligible son (Adam Brody), Nina makes a beeline for his father, who offers feeble resistance before succumbing to the young siren's practiced charms.

Dominoes fall on cue, bringing marital rupture and painful, last-night-was-a-mistake self-reflection and ... well, nothing much new. What The Oranges lacks by way of fresh plotting, though, it makes up for in slyly irreverent observation, without the easy cynicism that often accompanies such scenarios.

Director Julian Farino has a background making British documentaries — plus numerous episodes of Entourage this side of the pond — and along with screenwriters Jay Reiss and Ian Helfer, he has put his agreeably odd resume to smart use. The movie is less a comedy than an intelligently understated study of the ways in which perfectly decent people can screw up their lives, to say nothing of undermining the well-being of those they love. 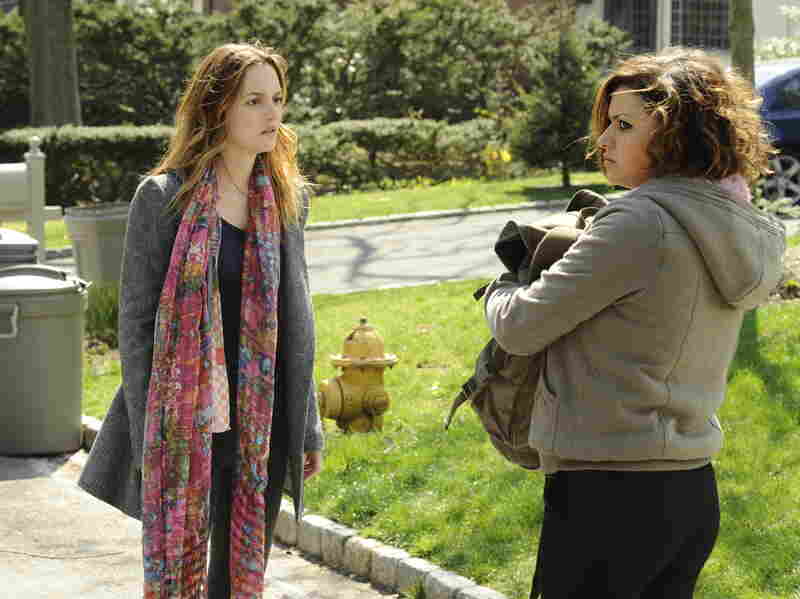 What makes you sit up straight is that The Oranges takes seriously everyone's unhappiness, including the home-wrecker's, without letting anyone off the hook of responsibility for their own becalmed misery. There are reasons Nina keeps sucking up all the air in any room she enters; why her folks are not paying the right kind of attention to her, let alone one another; why Paige is such a relentless booster of Christmas cheer; why her husband slumps nightly in his man cave with the TV and a nice glass of red for company; why Terry switches from being a gadget geek to an Ultimate Frisbee freak.

But this is no pity party, not even for the narrator, David and Paige's diffident live-in daughter, Vanessa. Played with restraint by the marvelous character actress Alia Shawkat, who deserves her own movie, Vanessa is the film's keen observer — except that, crippled by jealousy of foxy Nina and resentment at her own parents' self-absorption, she's far from omniscient and no more a victim than anyone else.

Sure, the movie makes it clear that when kids are getting shafted, following your bliss is at best beside the point, at worst pure selfishness. And who's going to quarrel with the fine idea that happiness is a byproduct of doing good for other people, preferably with zest?

So, yes, bows are tied. But what I liked was the movie's feel for the emotional mess and ambivalence of family ties, and its openness without hysteria to the fact that some of those ties might fray beyond repair. At the end of The Oranges, somebody slaps someone else who's done them wrong and says, "Some day I might thank you for all of this." (Recommended)