Accessibility links
Faltering Economy Threatens Pakistan's Stability Adding to recent political unrest in Pakistan, poverty is rife and unemployment is growing as the population skyrockets. Analysts worry about the growing frustration, and that the jobless are an increasingly easy target for the Taliban. 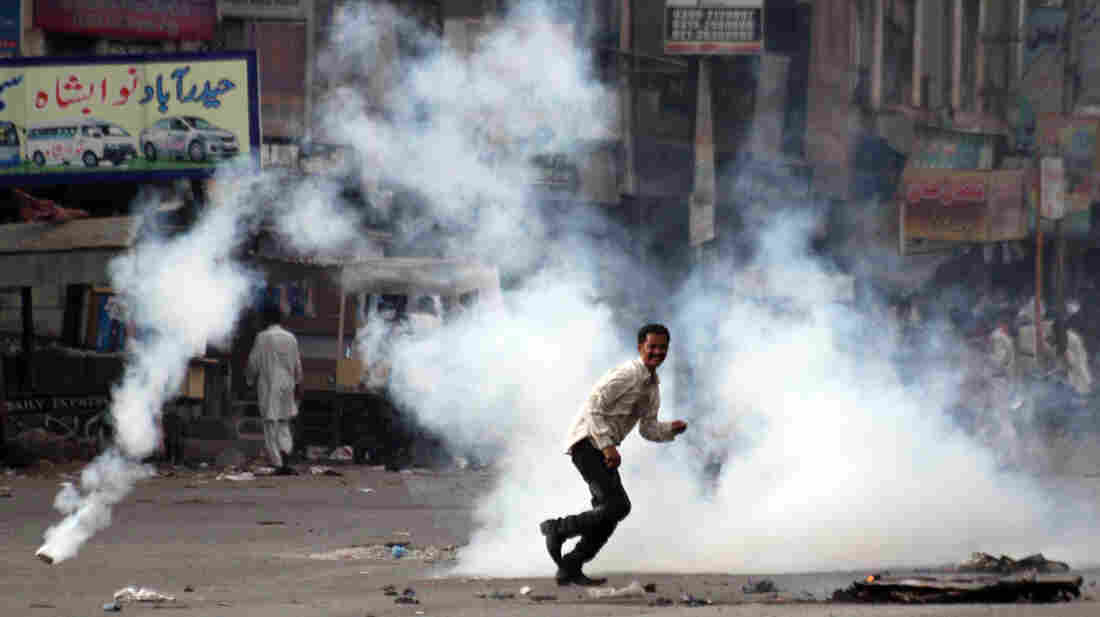 A demonstrator reacts after Pakistani policemen fire tear gas during a protest against power cuts in Karachi in June. Pakistan suffers from a massive energy crisis, one of several factors contributing to the country's severe economic troubles. Rizwan Tabassum/AFP/Getty Images hide caption

If you want to gain a good insight into Pakistan's economic situation, just look at a few of the country's newspaper headlines on any given day. The language says it all: prices soar, stocks plunge, budget deficit swells, foreign investment evaporates — and the list goes on.

Now, analysts are increasingly worried that the faltering economy could join Pakistan's pervasive insurgency and repeated political upheavals as another serious threat to the country's stability.

A recent report issued at the World Economic Forum says Pakistan ranks in the bottom 20 out of the world's economies. Nadeem Ul Haque, deputy chairman of the state Planning Commission, says nobody really wants to talk about economic reform, or draw up new fiscal policies.

"The debate is always so charged with religion and geopolitics and war on terror, just talking about economics takes second place — in fact fifth place, in fact seventh place, 10th place," Haque says. "Nobody really wants to talk about economics."

And while the government avoids making difficult economic policy decisions, key industries in Pakistan are taking a hit.

A Target For Extremist Recruitment

At the Sitara textile mill in the eastern city of Faisalabad, huge panels of cotton are imprinted with pictures of Spider-Man and Justin Bieber. They will be turned into duvet covers and sent to the U.S., says the plant's general manager, Ashfaq Ahmad.

He says his mill is the only one in Pakistan that has two machines for doing flatbed printing — but only one of them is running. The other is closed, he says, because of a gas shutdown.

Ahmad says serious gas and electricity shortages mean that this and other plants in Faisalabad can only operate four days a week. Power outages can last up to six hours a day.

Rehan Naseem Bharara, vice president of Faisalabad's Chamber of Commerce, says many textile factories have shut down, and another just recently reduced staff.

"They had about 13,000 people in their factory three years back, but now only 3,400 people are working," Bharara says.

He says the cutbacks have had a huge impact on the community, especially the jobless, who become an "easy target for ... people who promote terrorism in this country."

Western analysts say the decaying economy is as much of a threat to Pakistan's stability as the Taliban because widespread poverty and unemployment could lead to more political instability and an increase in extremism.

Security forces fired above a large crowd during recent demonstrations over an anti-Islam video. Most of those involved were young people. Pakistan has one of the world's fastest-growing populations, and job prospects for young people are growing dimmer.

Take a group of university students, who lounge on a bench and play guitar at an abandoned Islamabad train station on a recent day. Until six months ago, freight trains used to make regular stops at the station. Now the tracks are overgrown. The station is closed because of the rising cost of fuel and a shortage of train engines in the country. The university students use the area for relaxation, dating and talking politics.

Taheer Walid studies business, but he knows the chances of finding a job when he's finished with school are slim to none.

"Currently, if you talk about Pakistan, yes, this is the time to make a revolution," Walid says. "I mean, uncertainties are totally there ... political uncertainties and everything."

Haque, the deputy planning commissioner, says the country is currently growing at just over 3 percent, but that's not nearly enough to deal with what he calls the "youth bulge."

"We estimate there are about 90 million kids under the age of 20, and unless we grow the economy at 7 or 8 percent, we will not be able to employ these youths," he says.

Haque says that growth has to be consistent over the next 20 years. But that, he adds, is a tough order.