Accessibility links
Interview: Jose Garces, Author Of 'The Latin Road Home' | Chef Garces' New Cookbook For The Latin Road Home, chef Jose Garces traced the food traditions that have influenced his cooking. From Spain to Mexico, to Ecuador, Peru and Cuba, he investigated the techniques and ingredients that shaped the foods of his childhood. Garces talks about his journey, and shares favorite recipes. 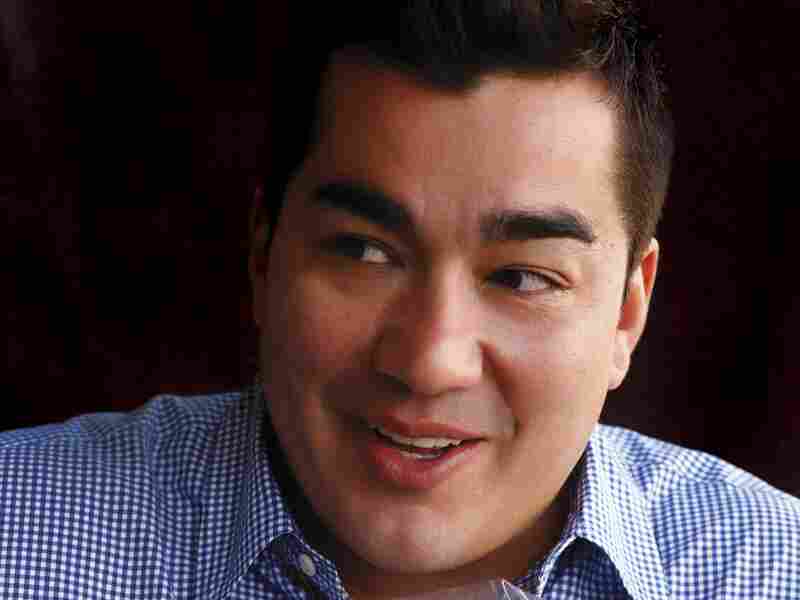 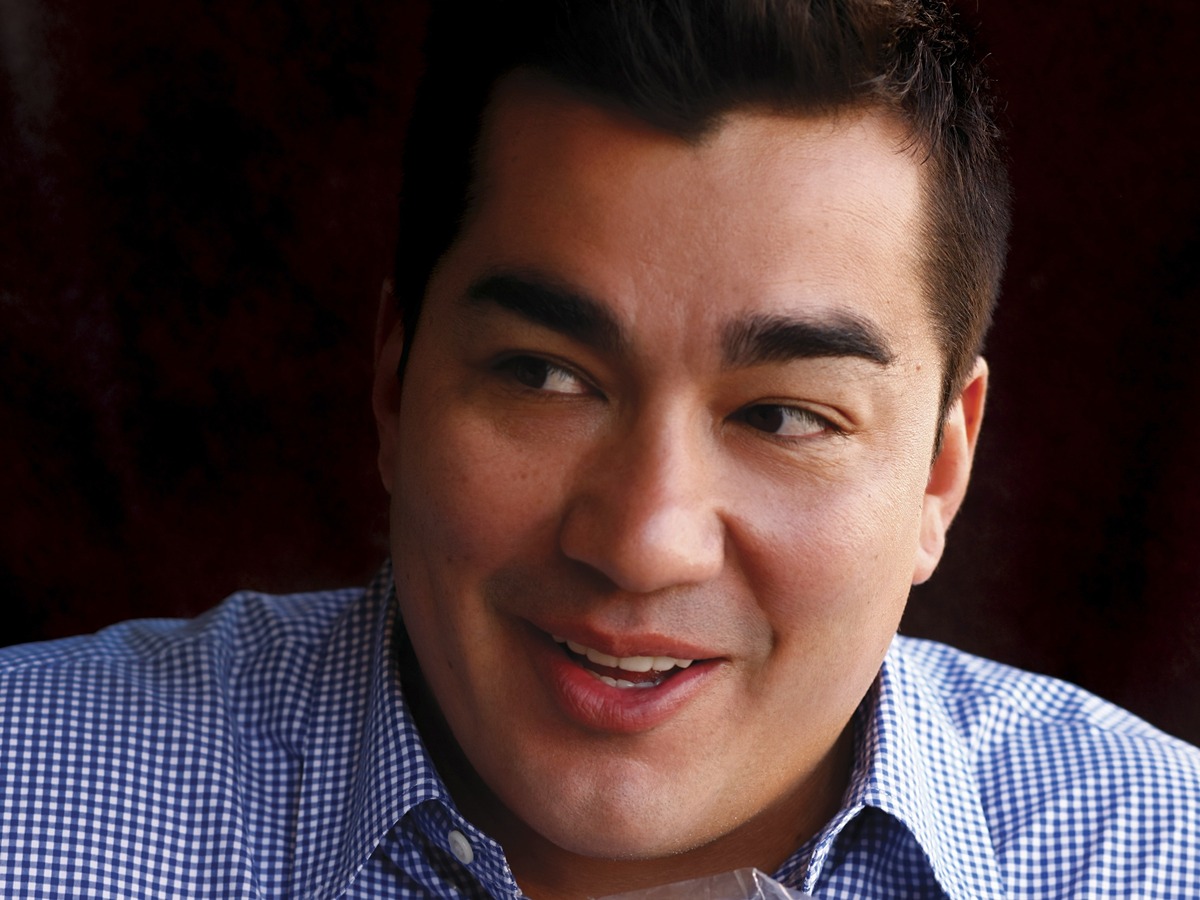 Jose Garces is among the most talented and innovative chefs in America. He opened his first restaurant, Amada, in 2005, and since then his Garces Group has opened 14 other restaurants across the country.

In 2009, he won the James Beard Award for Best Chef in the Mid-Atlantic region, and he's also a Food Network Iron Chef, rubbing elbows with the likes of Bobby Flay, Cat Cora and Michael Symon.

Now Chef Garces has a new book, The Latin Road Home. Part cookbook, part memoir and part travelogue, it traces the food traditions that have influenced his cooking. From Spain to Mexico, to Ecuador, Peru and Cuba, he investigated the techniques and ingredients that shaped the foods of his childhood.

Garces talks with NPR's Lynn Neary about his journey, and shares some favorite recipes.

On the food from his home country, Ecuador

"It's not a popular, I would say, mainstream cuisine here in the U.S. It's something that, I think, still needs to be discovered, and it's a very flavorful cuisine. ... Some of the best cooks that I've cooked with, whether it's in New York or Chicago or even here in Philadelphia, are actually Ecuadorians. And there's something about their palates that really just inspires me, and has a really deep sense of flavor. ... 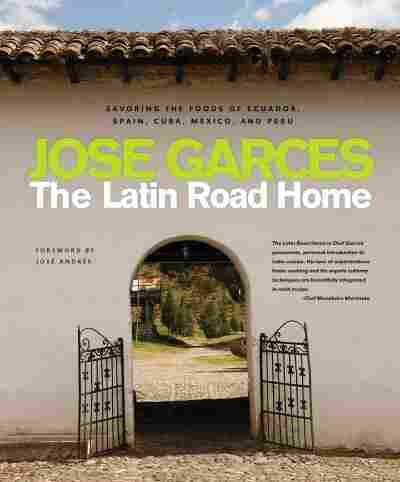 Savoring the Foods of Ecuador, Spain, Cuba, Mexico and Peru

"In The Latin Road Home, I talk about this kind of peasant style that's called las cosas finas, along with fritada. So fritada is a fried, crispy pork, and las cosas finas translates into 'the finer things,' or 'fine things.' And what it really is is a corn and hominy salad with fried pork. So that would be something that I could remember when I was 7 years old. I would see these ladies drive around these large carts and scream, 'Mote, mote!' And that would just mean that there is this hominy salad with crispy pork, and that would be, I would say, an Ecuadorian staple."

On the best ways to cook beans

"Beans are a staple, and my wife is Cuban. So I have to partake in my weekly dosage of Cuban beans, whether they're red or black or pinto. I mean, you name it. And, you know, one thing that's in beans, I think, having some ham product, whether it's bacon or a smoked ham hock, good aromatics and just giving them their time to cook. A good soak always works as well. So, soaking the beans overnight and then cooking them with enough liquid and just letting them go slow and low works. ...

"Probably for, like, one cup of beans, you would have about six cups of water. ... And then, you know, if they start to dry, just add more. And as they break down, they start to release some of their starch, and it begins to really make a flavorful broth, as well."

On the best places to eat in Cuba

"One of the things that I hope to do with The Latin Road Home is transport people to these different countries. So you open the chapter in Cuba, I'm taking you to a paladar, which is a restaurant in somebody's home in Cuba. And I'm sharing with you a meal that I experienced in a different paladar. ...

"I found that the restaurants weren't as great in Havana as the paladars were, which were little tables inside somebody's home. So it might only be like two or three tables, but folks were cooking their home-cooked meals, and that's where you would have dinner."

Note that the masa cakes can be partially cooked, then wrapped in plastic and refrigerated for up to 2 days. Makes 4 servings. 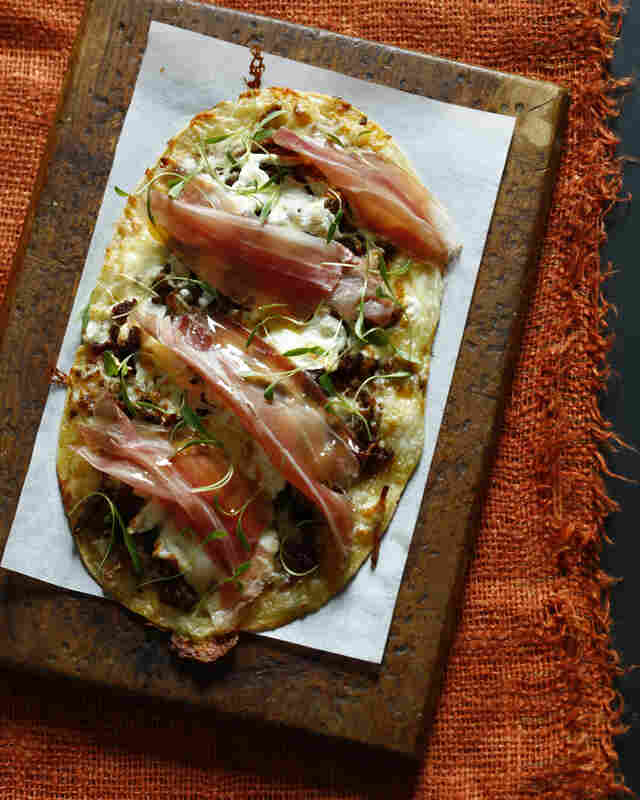 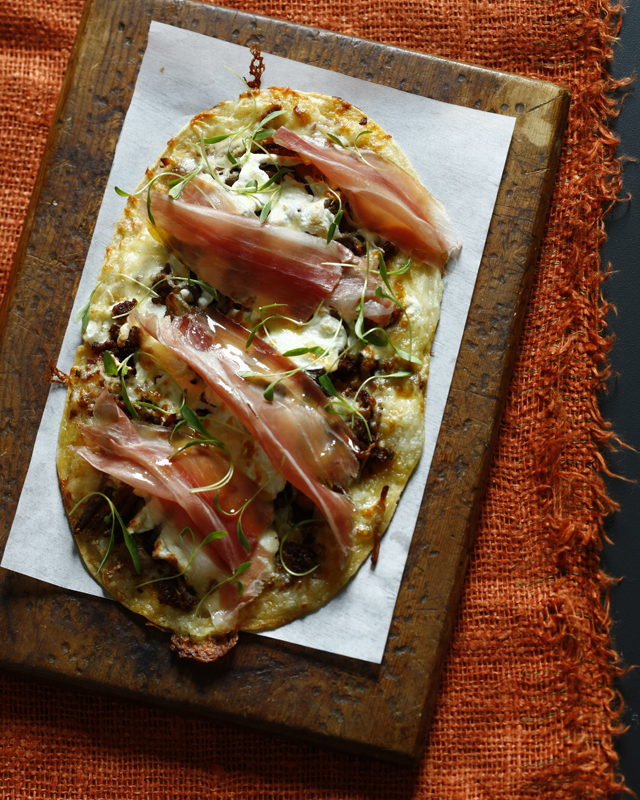 To make the masa cakes, combine the masa harina, chili powder and salt in a large mixing bowl. Slowly add the warm water, using your hands to mix the dough until smooth and form it into a ball. Cover the dough with a damp cloth and allow it to rest for 20 minutes.

Heat a lightly oiled griddle or skillet over medium heat.

Divide the dough into four equal portions. Use a rolling pin or tortilla press to flatten each portion, between two sheets of plastic wrap, into a long oval 1/16- to 1/8-inch thick. Precook each masa cake on the griddle for 2 minutes per side. If not using right away, wrap the masa cakes in plastic wrap and refrigerate until needed, up to 3 days.

To top the masa cakes, spread each with a thin layer of potato, then top evenly with the chorizo, carnitas and Oaxaca cheese. Bake the huaraches directly on the baking stone until the bottoms of the cakes are crispy and the cheese is melted, 6 to 8 minutes. Top each huarache with 4 slices ham and sprinkle on a few slices of pickled jalapeno and microgreens. Pass hot sauce at the table.

Here, again, the pressure cooker is an absolute necessity: It expedites the cooking and makes the meat tender and the whole dish deeply flavorful. Makes 4 servings. 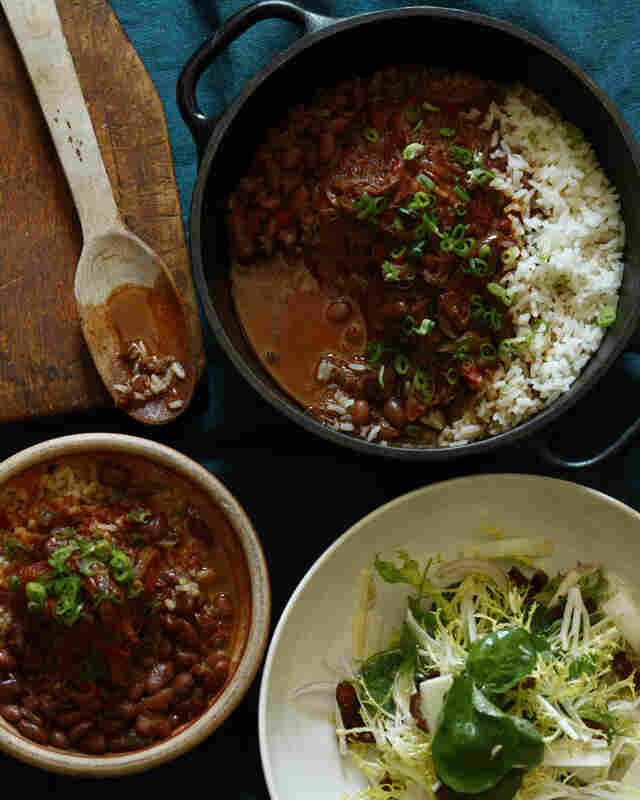 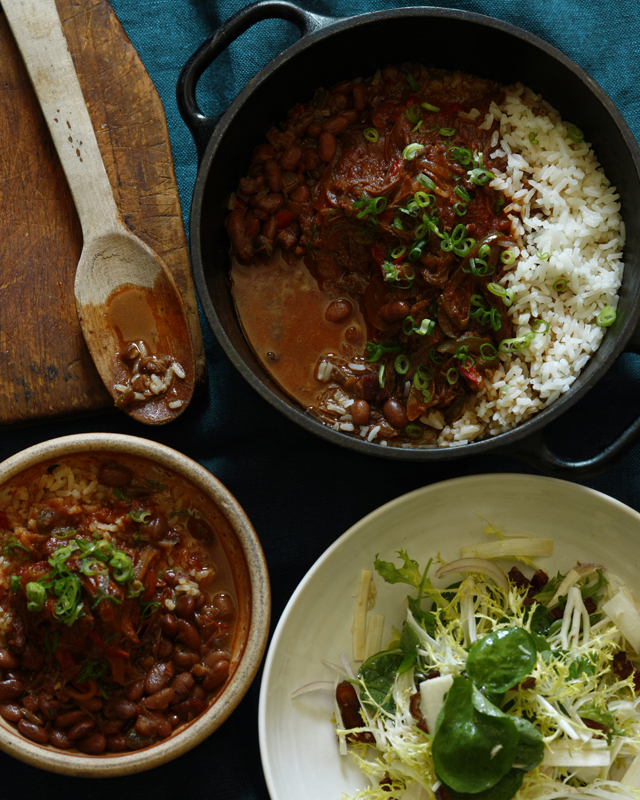 To prepare the braised beef, heat 2 tablespoons of the oil in a large cast-iron skillet over medium-high heat. Generously season the meat with salt and pepper. Sear it until well browned, 3 to 4 minutes per side. Set aside.

Heat the remaining 2 tablespoons oil in a pressure cooker over medium-high heat until it shimmers. Add the bacon, onion, bell peppers and raw and roasted garlic. Cook until the onion is translucent, about 10 minutes, stirring frequently. Stir in the tomato paste, cumin and vinegar and cook until the mixture is lightly caramelized, about 5 minutes. Add the stock, seared short ribs and kidney beans. Close and seal the pressure cooker and cook over medium-high heat for 1 hour.

Lift the short ribs out of the cooker; the meat should be soft to the touch and fork-tender. While the meat is still hot, shred it with a fork and set aside. Measure out 1 quart (4 cups) of the braising liquid and set aside (return any beans to the pot).

To finish the beans, transfer the contents of pressure cooker to a saucepan and cook over medium heat, stirring occasionally, until the liquid thickens, 18 to 20 minutes.

Meanwhile, to make the sauce, heat the oil in a large saute pan over medium-high heat. Add the onion, bell peppers and garlic and cook until translucent, about 10 minutes, stirring frequently. Stir in the tomato paste and cook until the mixture is caramelized, about 5 minutes. Add the reserved braising liquid and cook until reduced by about half, about 15 minutes. Add the meat and stir to incorporate. Fold in the parsley, cilantro and tomatoes and season to taste with salt and pepper.

Serve the ropa vieja and beans with rice and plantains, garnished with scallions.

The dough must rest properly and has to be rolled out thinly to be workable, but once you get it down, this is an easy dough to handle. When forming the empanadas, make sure the edges are well sealed so they don't leak while frying. You can roll and crimp the edges a few times to help ensure that they're closed up tightly. Fully formed empanadas de viento can be frozen, wrapped tightly in plastic and foil, for up to 2 months; thaw in the refrigerator before frying. The dough can be refrigerated for up to 1 day. Makes 12 empanadas. 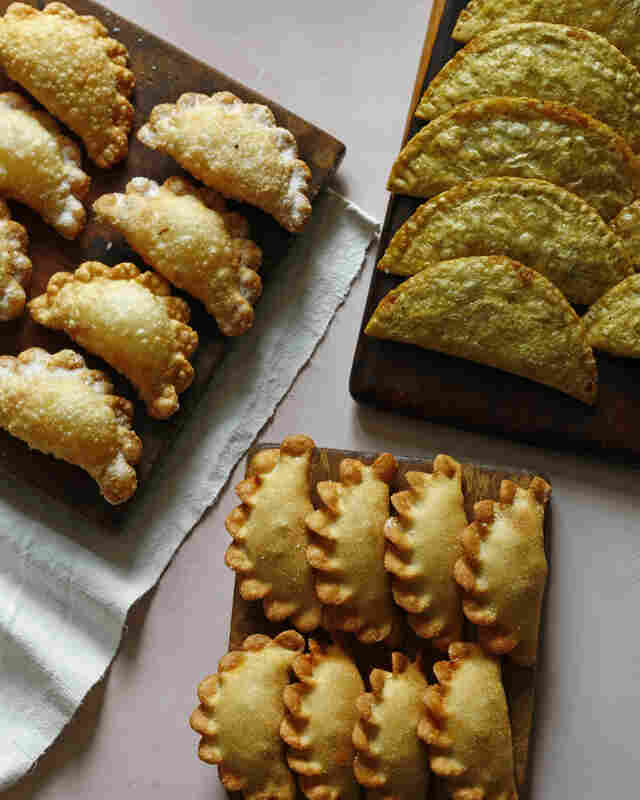 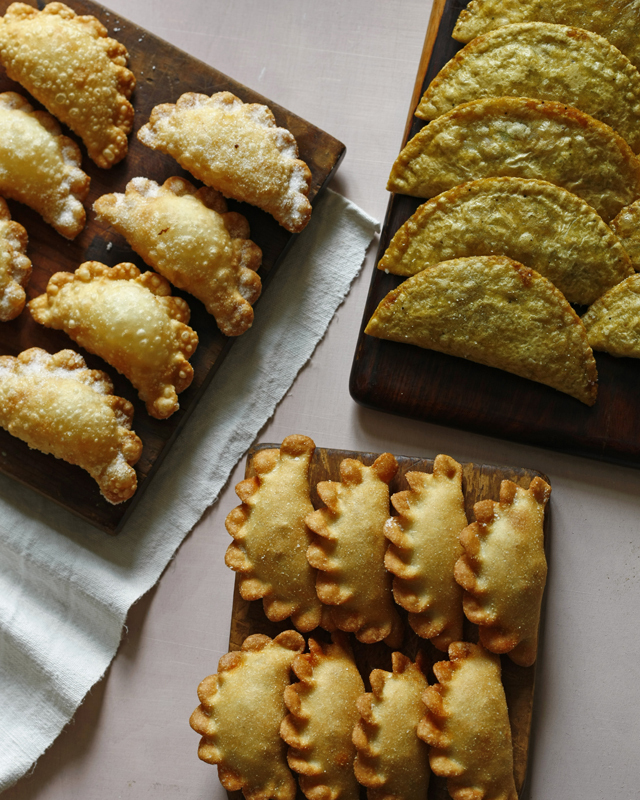 To make the dough, sift the flour, salt and sugar together in a bowl. Use a pastry blender to cut the vegetable shortening into the dry ingredients until it is fully incorporated. Add the egg yolk and mix well. Adding 2 or 3 tablespoons at a time, knead in the water with your hands until a smooth dough forms. Pat the dough into a round, flat disk and wrap it tightly in plastic wrap. Refrigerate it for at least 1 hour or up to 1 day before making the empanadas. To assemble the empanadas, divide the chilled dough into a dozen 1-inch balls. Using a manual tortilla press, a rolling pin or the heel of your hand, press each dough ball into a circle about 1/8-inch thick and about 6 inches in diameter.

Mound about 2 tablespoons of cheese in the center of each round and fold the dough over to form a half-moon. Use a dinner fork to crimp the outer edge. Alternatively, use a plastic empanada press from a Latin market. To cook the empanadas, heat the oil to 350 degrees in a stockpot, using a candy or deep-fry thermometer to monitor the temperature. Line a baking sheet with parchment paper. Fry the empanadas in batches until they are golden brown and crispy, 3 to 4 minutes each, turning once in the oil. Drain them on the baking sheet and sprinkle with sugar before serving with pickled onions and aji on the side.