Accessibility links
Not Everyone In Spain Eager To Wager On EuroVegas U.S. casino mogul, billionaire and Republican donor Sheldon Adelson has chosen debt-ridden Spain as the location for a $35 billion European gambling megacity. "EuroVegas" in Madrid could bring up to 250,000 much-needed jobs. But residents are divided over whether casinos are the kind of development they want. 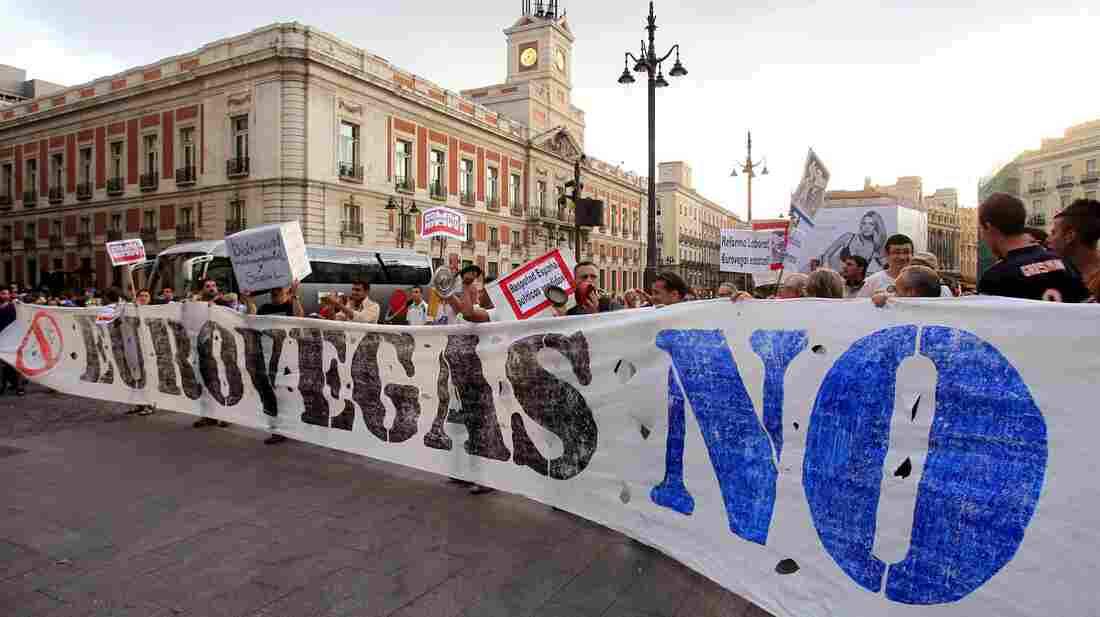 American billionaire, casino mogul and Republican donor Sheldon Adelson has a new project: a $35 billion gambling megacity in Europe. He has chosen debt-ridden Spain as the location for "EuroVegas," which is expected to bring up to 250,000 much-needed jobs.

But many Spaniards are divided over whether they want casinos in their backyard.

Adelson recently touched down in his private helicopter in the Madrid suburb of Alcorcon, where wind whips across empty lots and half-built apartment blocks. The area has been down on its luck since the housing collapse, and one-third of its residents are unemployed.

Unemployed residents like 28-year-old Ruben Alvarez say it's like a mirage in the desert — almost too good to be true.

"If it's true and they really bring 250,000 jobs here? Imagine that. Things would definitely improve here if people had work. It would let people breathe a sigh of relief," he says. "But we'll have to see if it's true."

Spanish politicians have been salivating over the jobs EuroVegas would bring. Madrid beat out Barcelona for the contract by offering concessions. Now some of the initial euphoria is waning, as Spaniards learn the terms of the deal.

As Europe Goes, So Go Its Fake Monuments

Las Vegas Sands, Adelson's company, says it'll pay only 35 percent. Cash-strapped municipal authorities would somehow have to come up with the rest. Adelson's company is also asking for tax breaks and exemptions from local labor laws — to bring in foreign workers and allow smoking inside casinos, despite a nationwide ban.

In this economy, Spain doesn't exactly have much bargaining power. And some feel Adelson is taking advantage of that.

Carlos Ruiz is a retired engineer who volunteers with a group called "EuroVegas No."

"Taking into account the very bad situation of Spain, he's doing all kinds of blackmails," he says.

Ruiz worries that with Europe's highest jobless rate — 25 percent and double that for youth — Spain is willing to sell its soul for a few jobs. He says Spanish leaders have fallen for a get-rich-quick scheme.

"[A plan] that we think doesn't create good jobs, stable jobs, that harms the environment, that harms the social relations, that ignores civil rights, that brings wealth only to the investors, not to the rest of society," he says.

Tax Breaks For A Billionaire?

Madrid is thinking about taking out massive bank loans to finance its part of the deal. But Spanish banks just got a bailout from Europe.

"Citizens from the whole of Europe are lending money to Spanish banks because they are in a bad situation — hoping that someday these banks will start to give credit to small enterprises, to families, to people," Ruiz says. "But this money is going to go to Mr. Adelson, who is one of the richest men in the world. This is quite unfair."

Adelson would also get tax breaks for his investment. Economist Gonzalo Garland, at IE Business School in Madrid, says if the government is going to offer tax breaks to casinos — which could bring prostitution, drugs and the like — it needs to better explain that decision to the public.

"A lot of people might think gambling is something where you do want to charge lots of taxes rather than not," Garland says. "But I think it's very important to be careful to show that this would be an exception because of some other gains; the gains would be the tourists and all the money they'll be leaving."

Both Las Vegas Sands and Madrid's town hall failed to respond to repeated calls for interviews, perhaps because negotiations over EuroVegas are still under way.

Need For Other Sources Of Growth

Beyond any moral objections, Garland says construction is what got Spain into this economic mess in the first place. Madrid's suburbs are littered with empty buildings left over from the housing boom.

"I think it would be a big mistake for Spain to again try to rely on construction as a big engine of growth," Garland says. "What probably Spain needs is to look for other sources, and look for several — not just concentrate on one."

Subsidies for wind and solar energy — possible future engines of growth in Spain — were cut in the last round of austerity, right around the time Adelson came calling.

Back in Alcorcon, where the casinos are slated to be built, 28-year-old Ruben Alvarez kills time on a bench near town hall. He's been out of work nearly a year. He says he's not crazy about casinos, but that he'd jump at the chance to work at one, nonetheless.

"People are out on the street. Those lucky to have jobs are getting paid less and less. Every day things are getting worse," Alvarez says. "So with casinos coming, it's a good thing for the jobs, but it could also be dangerous for us — for the young people, if there's prostitution and gambling.

"It could be a bit of a temptation," he says. "Considering the situation we're in."