Accessibility links
Musician Ben Folds Plays Not My Job Years ago, musician Ben Folds started a band with his two friends and called it the Ben Folds Five. Ben Folds went on to have a solo career, but he's gotten the band back together and their new album is The Sound of the Life of the Mind. Folds plays a game called "I'll Be Back!" 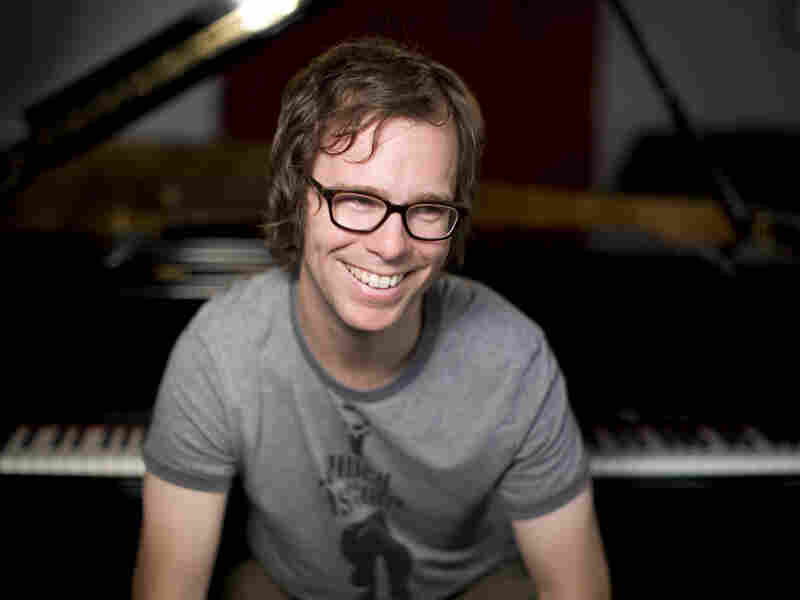 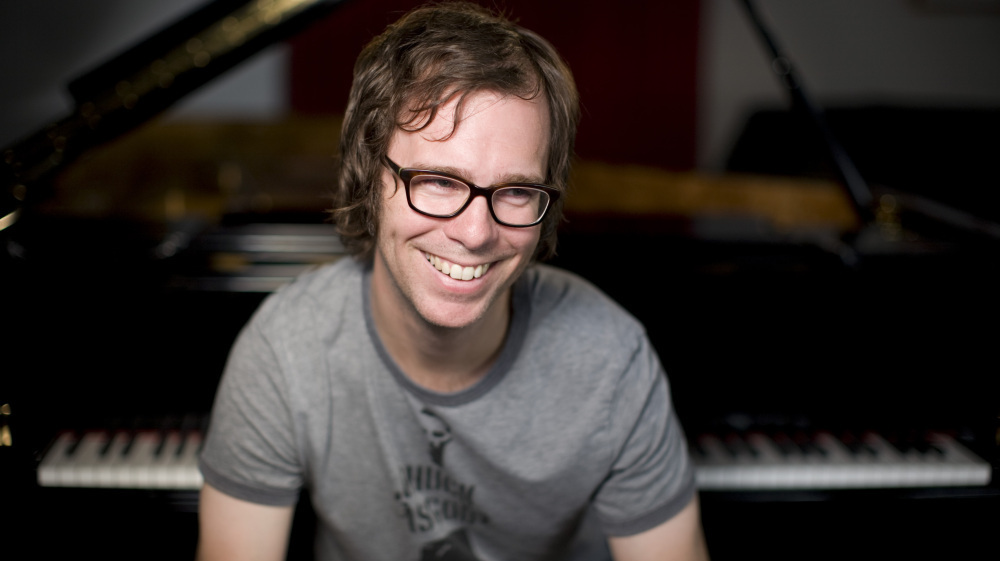 Years ago, musician Ben Folds started a band with his two friends and called it the Ben Folds Five. This was confusing, but it didn't keep the band from becoming a huge success.

Ben Folds went on to have a solo career, but he's brought the band back together and their new album is The Sound of the Life of the Mind. Folds plays a game called "I'll Be Back!"

And now, the game where talented people use none of their talents, it's called Not My Job. Years ago, musician Ben Folds started a band with his two friends and called it the Ben Folds Five. This was confusing. It did not keep the band from being a huge success.

Ben went on to have a solo career, but he has gotten the band back together. Their new album is "The Sound of the Life of the Mind." There are still three of them. It's called Ben Folds Five. I don't get it. But Ben Folds, welcome to WAIT WAIT...DON'T TELL ME.

SAGAL: So let me start here. Why do you call your band the Ben Folds Five when there are three of you?

BEN FOLDS: We thought it was funny.

FOLDS: And judging by the laughter the first time around, which was about three people, that's about how funny it is.

SAGAL: Do people come see you and thought you were the opening act for the actual band?

FOLDS: Or two of us were sick or, you know, there was a stereo track running in the background like there are with a lot of live bands.

SAGAL: Right. For someone who is not familiar with your music, can you describe a typical Ben Folds song? We once heard you describe your music as punk rock for sissies.

FOLDS: Yeah, that was - when we started, we were ourselves carrying a baby grand piano into punk rock clubs. And we moved the piano ourselves for three years. I never played on anything but that piano. I never played on an electronic piano. Thanks to the hard work of, you know, my two band mates, myself and a guy named Trey who was on unemployment.

FOLDS: Well, I guess you can apply the same pelvic motions but they're just slightly obscured by the instrument.

FOLDS: I mean, I play guitar too. It's a lot more of a physical instrument; the piano is much more physical. A guitar doesn't really require that much, so there's a real art behind making it look much harder than it is.

SAGAL: We were looking at your early career. It seemed like you were at the University of Miami studying percussion.

SAGAL: And there's a story that like there's the big final exam concert and you're going to come out and play.

SAGAL: And you couldn't do it because you broke your hand in a bar fight.

FOLDS: Well, almost. Yeah, my hand was broken. I had stitches in my nose and in my lip, but I had to play...

SAGAL: Wait a minute, you skipped a bit. How did that happen?

FOLDS: Well, you know there was this guy who came specifically to mine and my roommate's room to pick a fight with my roommate.

FOLDS: ...an amateur boxer. So had it been a drum off, he'd have been in the hospital.

FOLDS: It doesn't work that way. So foolish me, I stepped in to try to defend my roommate and ended up in South Dade Hospital for the night.

And it was really dramatic, a cop car delivered me back to my drum percussion test jury, where I was forced to play it, even with the broken hand, because if I was a real musician, I would have to show up to my gig and play or be fired.

Yeah, so I flunked that test and lost my scholarship. And I threw my drums, dramatically, into Lake Osceola in the middle of the University of Miami.

AMY DICKINSON: Geez, would they make like a basketball player play with a broken hand? That's crazy.

FOLDS: Yeah. I wish you had been there to...

SAGAL: I want to talk to you about your image because it is somewhat geeky, is it not?

FOLDS: Well, or so I have read.

SAGAL: Yeah, well I mean you have done stuff to maybe accentuate the geekiness. For example, you went back and got a singer who was famous in the 70s, who had faded into some obscurity and you produced an album for him. Of course, I'm talking about William Shatner.

SAGAL: You actually, because we all grew up listening to William Shatner, you know, "The Transformed Man," doing "Mr. Tambourine Man."

SAGAL: And we laughed. And you're like, no, this man needs a new record.

FOLDS: Well, you know, that record had captured my imagination as a child.

FOLDS: But I mean I listened to it as a kid.

FOLDS: I mean you might have thought it was funny as a child.

FOLDS: And I think a lot of people did but I really was fascinated with it. I was really in to "Mr. Tambourine Man" and it was back to back with Cyrano...

SAGAL: Oh yeah, and "Lucy in the Sky with Diamonds."

FOLDS: And you know, there aren't many people who you want to listen to when they speak and that's what fascinated me about him. All these talking heads all over the world and for some reason when he talks, you listen.

SAGAL: Because you want to wait for the next word.

SAGAL: It'll come along eventually. Well, Ben Folds, we're delighted to talk to you and we have invited you here to play a game we're calling.

CARL KASELL: I'll be back.

SAGAL: That was Carl's Arnold Schwarzenegger right there.

DICKINSON: I'll be back.

MAZ JOBRANI: Spot on. Spot on.

SAGAL: Carl whipped out his perfect Arnold Schwarzenegger imitation for you because Mr. Schwarzenegger has a new memoir out; it's called "Total Recall." And we're going to make a small bet that you haven't read it yet.

SAGAL: I'm sure it's on your shelf.

SAGAL: We're hoping you didn't get to it because we're going to ask you three questions taken from the book. If you answer two of them, you'll win a prize for one of our listeners, Carl's voice on their home answering machine. Carl, who is Ben Folds playing for?

KASELL: Ben is playing for Kathy Erskine of Charlottesville, Virginia.

SAGAL: All right, here, Ben, is your first question.

SAGAL: As a young man in Austria, Arnold showed a strong interest, of course, in bodybuilding. How did his mother react to this enthusiasm? Was it A: By buying him the heaviest dog she could find in their village, so he could pick it up over and over again for exercise? B: Going to a doctor to check if he was gay?

SAGAL: Or C: Lying stiff as a board and allowing him to bench-press her?

FOLDS: I'd say probably the taking to the doctor.

SAGAL: She went to a doctor.

SAGAL: And the doctor assured her that the reason that he was putting up pictures of bodybuilders all over his bedroom was nothing untoward, it was just because he had a healthy need for a father figure of some kind. That's the diagnosis. There you go, that's one right.

SAGAL: There you go. Next question: Arnold's first really big film role, the one that made him a star was the title role in "Conan The Barbarian." How did he prepare for the key scene in which he is attacked by wolves? I'm sure you know it. I do.

SAGAL: It's a moving scene. A: He wrestled for hours, prior to the scene, to get into it, with his matched pair of German shepherds, named Gluteus and Maximus?

SAGAL: B: He sewed raw meat into his costume? Or C: He lay in the woods until a wolf pack found him and raised him as one of their own?

SAGAL: You're going to say A, he wrestled for hours with his German shepherds.

No, he actually put raw meat into his costume so the wolves would be more excited to jump on him. That's the kind of commitment to his role that Arnold Schwarzenegger had.

PAULA POUNDSTONE: Wasn't he concerned that he would actually be eaten?

SAGAL: Apparently not, who would dare to bite him?

SAGAL: All right, this is actually OK, because you've got one right with one to go. If you get this, you'll still win. At the end of the book, Arnold, a very successful man, offers you some of his slogans for success, including which of these? A: When someone tells you no, you should hear yes?

SAGAL: B: You can do anything, unless you're a weakling? Or C: If something seems impossible to you, just consider the fact that I became a movie star?

FOLDS: Wow, they're all compelling.

SAGAL: You're going to go with C: if something seems impossible just consider the fact that I became a movie star.

SAGAL: Well I wonder if he thinks it's that unlikely.

DICKINSON: That was his destiny.

FOLDS: Are you guys trying to get me to change to B?

SAGAL: I will point out that I'm a really big fan, if I didn't mention that before.

JOBRANI: What was B?

SAGAL: B was you can do anything unless you're a weakling.

FOLDS: That's probably what he said, but I like C. I'm going to stick with C.

DICKINSON: Wait. What was A?

SAGAL: A was when someone tells you no you should hear yes.

DICKINSON: Oh. That explains a lot.

JOBRANI: Maybe if Ben hears it in Arnold's voice.

SAGAL: All right, I'll try that.

SAGAL: Can you, Carl.

KASELL: When someone tells you no...

KASELL: You should hear yes.

SAGAL: You're going to go with A: when someone tells you no, you should hear yes. And you're right.

SAGAL: That is an Arnold Schwarzenegger motto for success. Carl, how did Ben Folds do on our quiz?

SAGAL: The Ben Folds Five new album is called, "The Sound of the Life of the Mind." Ben Folds, what a pleasure to talk to you. Thank you so much for joining us on WAIT WAIT...DON'T TELL ME.

FOLDS: Thank you everybody.