Accessibility links
Chavez's Socialism At Stake In Venezuelan Election President Hugo Chavez has never faced a serious threat in a presidential election until now. A young former governor has been electrifying crowds and putting Chavez's 14 years of power — and his socialist experiment — at risk. 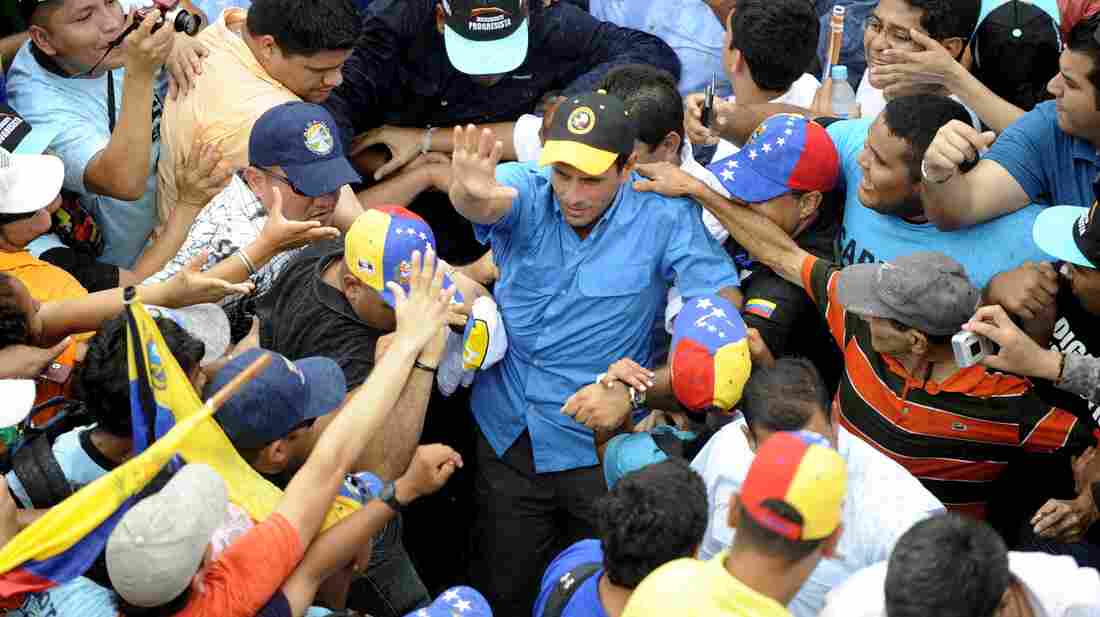 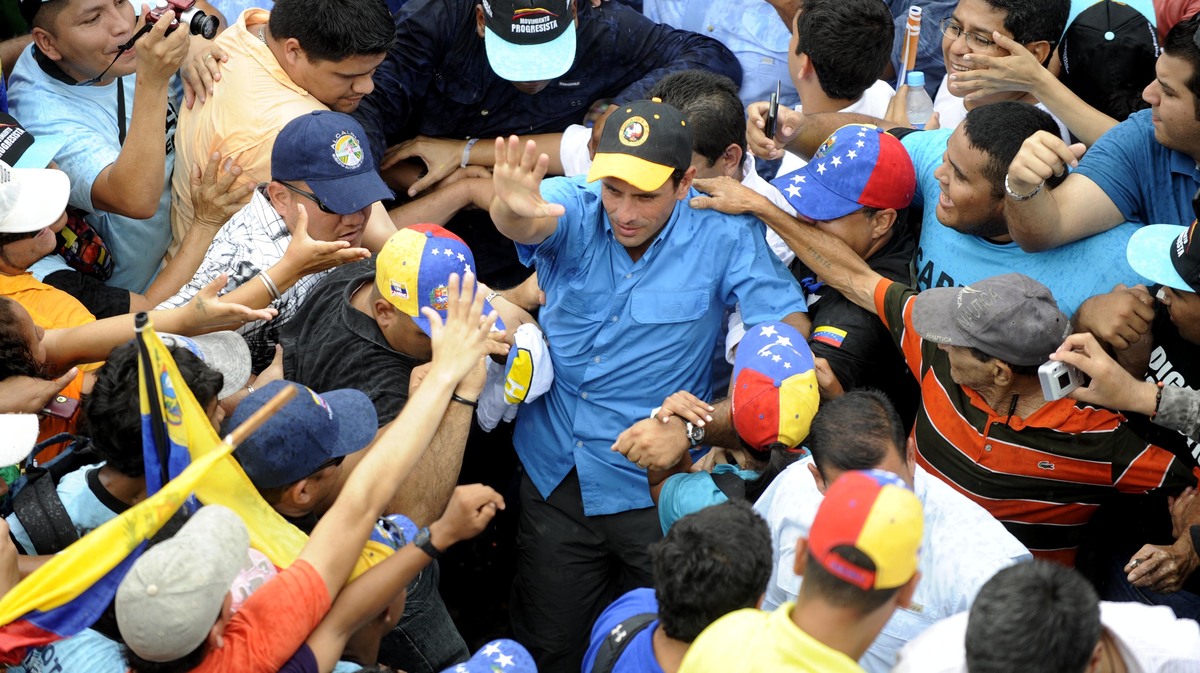 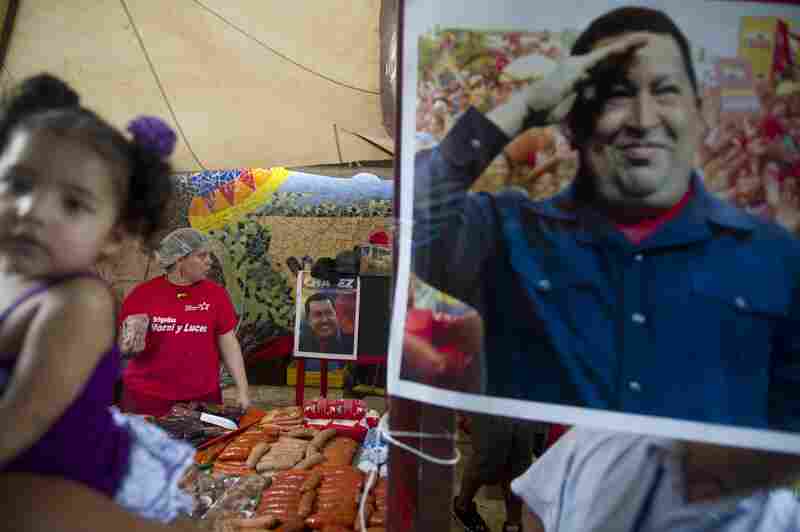 A picture of Venezuelan President Hugo Chavez was on display this week at a state-run market that provides subsidized food and basic goods in Caracas. Eitan Abramovich/AFP/Getty Images hide caption 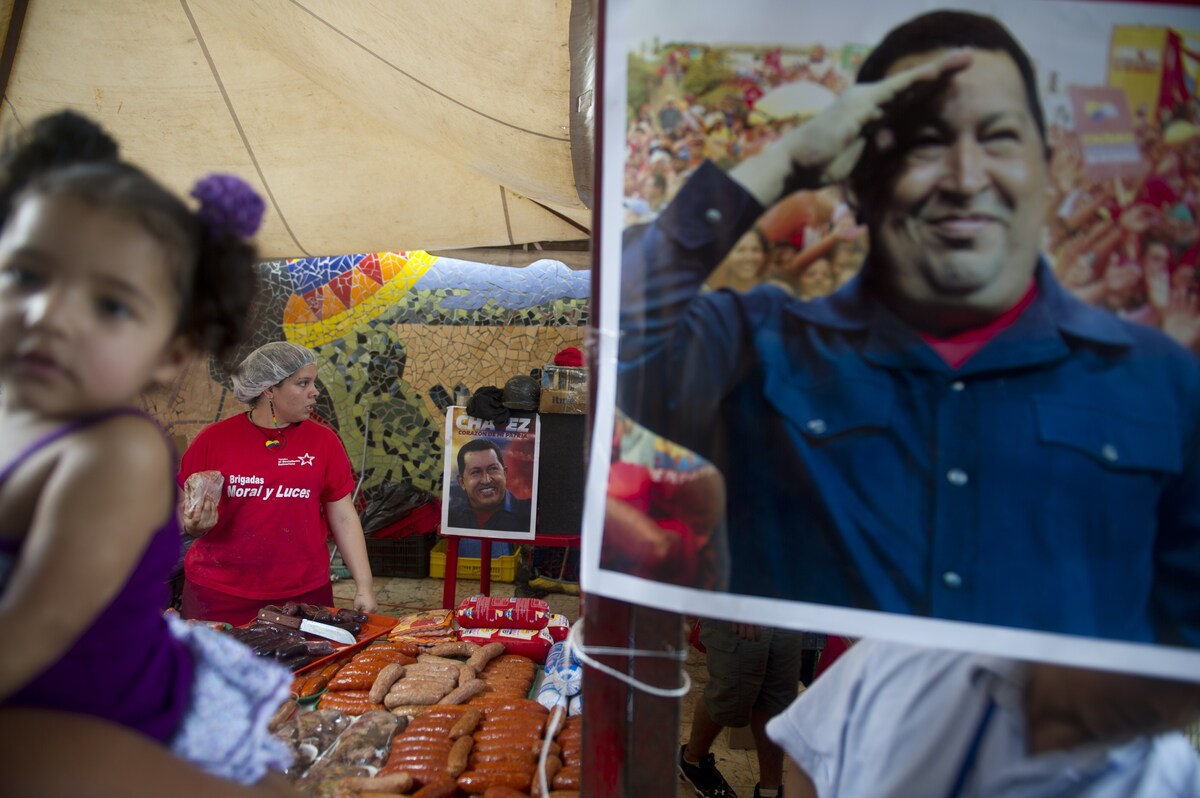 A picture of Venezuelan President Hugo Chavez was on display this week at a state-run market that provides subsidized food and basic goods in Caracas.

On Sunday, Venezuelan President Hugo Chavez faces his most serious election test in 14 years of power. Though he has easily beaten his adversaries in the past, Chavez now confronts a 40-year-old former governor who has been electrifying the crowds.

The stakes are high. If Chavez loses, it could mean the end of his socialist experiment in the oil-rich nation.

In speech after speech, Chavez is like the Chavez of old — bombastic, loud, defiant, with grand dreams about projecting Venezuelan influence worldwide.

He's the president who once called George W. Bush the devil during a United Nations speech. He's also using his alliances with Iran, Cuba and Russia to counter U.S. power. And he's sitting on the world's biggest oil reserves.

"When I say Chavez wins ... I am not the one who wins," Chavez said in one speech. "Chavez is the people."

His message is clear: A vote for Chavez is a vote for the people. But the Chavez of today is far different from the dashing former army colonel in the red beret who swept into power in 1998.

Venezuelans then were ready to overturn the old economic order. Chavez was young and energetic; his plans for a socialist fatherland held out hope.

Now, Chavez is slowed by a cancerous tumor he says was removed earlier this year. He looks bloated and older and walks gingerly. Polls show he also faces growing opposition.

Henrique Capriles waded into big crowds in Caracas one recent day. He promised to bring down rampant crime and reverse the government expropriations of businesses he says have damaged the economy.

"Judge for yourself who's going to bring change and who's become sick with power," Capriles said.

"Capriles cannot be said to be a neoliberal candidate," Romero says. "He's been a populist."

Two polls show Capriles and Chavez in a rough tie; two others show Chavez well ahead. The key could be the many undecided voters.

"The undecided are deciding," says Juan Mijares, the No. 2 in the Capriles campaign, "and the trends are that those people will break for Capriles."

On the surface, it's hard to see how that could happen in a big, bustling barrio like Petare.

Ismar Mota, a longtime resident who's campaigning for Chavez, says the president has redistributed oil wealth and improved people's lives. Mota says 14 years is not enough, though, and that Chavez needs more time to consolidate socialism.

But undoubtedly, some people who once supported Chavez are now looking to Capriles. Standing at the door of her house, Maria Uribe says she worries about her 9-year-old son in the Venezuela of today.

"I worry about his future, explaining how the way things are going, life is going to get harder and harder," she says.

The public schools are shoddy, Uribe adds, and the economy doesn't create many good jobs.

"The truth is that these elections are very important," she says. "The country needs change."