Accessibility links
Watch This: Native American Author Sherman Alexie The author and poet is known for his perspective on being a Native American in contemporary culture. Alexie shares his recommendations for YouTube videos, movies and TV shows, including iconic Olympic moments, raunchy British teens and an Eastwood Western. 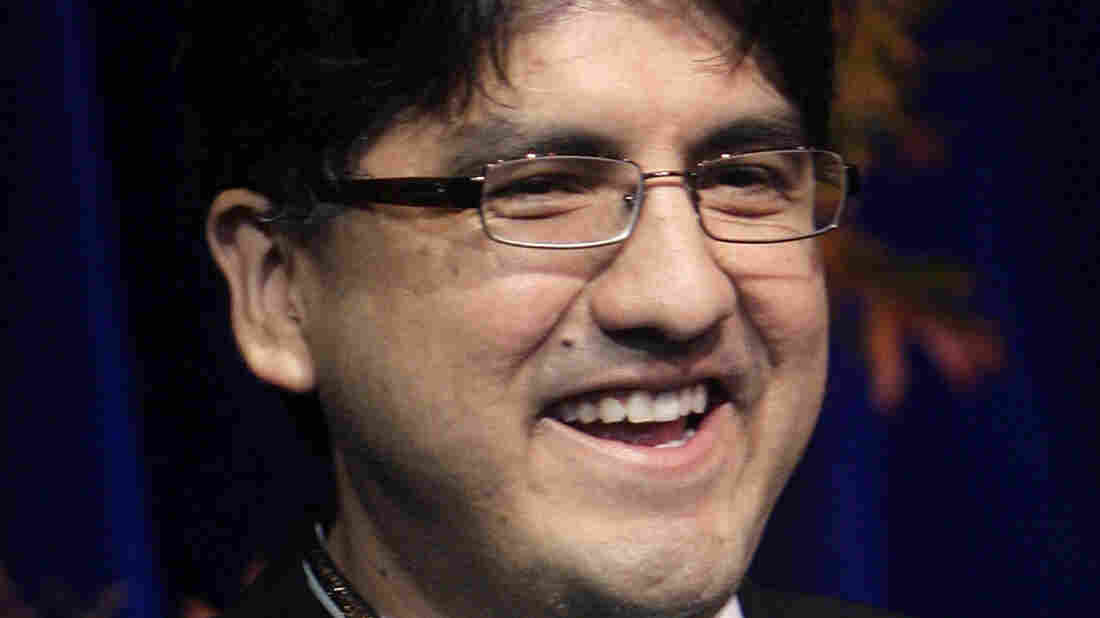 Author and poet Sherman Alexie grew up on the Spokane Indian Reservation and won a National Book Award for The Absolutely True Diary of a Part-Time Indian. His new story collection is called Blasphemy.

Alexie spoke with Steve Inskeep about the movies, TV shows and YouTube videos that he thinks everyone should see. Alexie is the latest guest in Morning Edition's series Watch This.

Alexie described this race as "probably the greatest upset surprise in Olympic history." And it would be no wonder if it was, since, coming into the 1964 Olympic Games, an American had never won the men's 10,000-meter race.

"Billy Mills, a Sioux Indian who was really lightly regarded, came out of nowhere to win the race and to win the gold medal," Alexie says. Australia's Ron Clarke, with a qualifying time almost a minute faster than Mills', had been favored to win.

"That burst of speed that Billy Mills puts out is like Usain Bolt. He just goes flying past — and this is a 10,000-meter race," Alexie says.

The race is so surprising that Alexie almost sees something divine in it. "In the Indian world, there's all sorts of stories about, you know, God reaching down and deciding that this Indian guy was going to do it. And that's what it looks like, regardless of how you feel about God — it certainly looks like some other force grabbed him and pushed him."

"This is the Holy Grail for basketball fans and the Olympics," Alexie says.

At the 2000 Olympic Games in Sydney, the American men's basketball team faced off against France in a preliminary game. At one point, 6-foot-6 American Vince Carter practically jumped over 7-foot-2 Frenchman Frederic Weis for a slam dunk.

Alexie believed the move was stunning, saying, "It is — remains — the single most athletic move of all time."

Alexie wasn't the only one spellbound by Carter's feat.

"If you look into the crowd, you see people stunned — I mean, far fewer people are standing and cheering than you'd expect, because I don't think they believe what they just saw," Alexie says.

The U.S. team won the game and, perhaps unsurprisingly, won the gold when they faced France in the finals.

The British comedy The Inbetweeners, which aired for three seasons and spawned a full-length movie in 2011, is a favorite of Alexie's because of its honesty in portraying the adolescent condition.

"It's the tale of these four public-school young men who are, as all young men are all around the world, most vitally interested in the opposite sex," Alexie explains. "It's the story of their adventures in trying to get a girlfriend and going to parties and trying to fit in and trying to be cool, but it is profane in that glorious British way."

Alexie truly appreciates the brashness in the writing.

"It tries to portray teenagers for the fully complicated and crass human beings that they are," he says. But the other thing he celebrates is "that there is a country where this kind of honest depiction is available in prime time."

An American adaptation of the show premiered on MTV in August.

"There's nobody who loves Westerns more than Indians," Alexie says. "The Outlaw Josey Wales is an amazing movie, and the amazing part for me now, watching it as an adult and thinking about it, is the hero is a Southern Confederate soldier."

That Confederate solider, the titular Josey Wales, is played by Clint Eastwood. This film follows Wales as he goes on the run from the Union soldiers who murdered his family.

"So here's a movie where you're actually rooting for and identifying with a Confederate soldier," Alexie says.

The film also had an interesting back story.

"The book was written by Forrest Carter, which was the pen name of Asa Carter, who was actually a former KKK bigwig and was the chief speech writer for George Wallace. And he wrote this novel which was turned into this movie," Alexie says.

Alexie's favorite part of the movie has to do with its appeal to his Native American heritage.

"The thing that really appealed to me was [that this was] the first movie I saw that humanized Indians, that they weren't cartoons or caricatures."

"It's the most famous visual record of Sasquatch — Bigfoot," Alexie says of the footage.

The film, which is only about a minute long, has inspired multiple documentaries questioning its authenticity. It was purportedly shot in Northern California in 1967 by Roger Patterson, a rodeo star and Yakima Indian, a fact that Alexie was quick to add.

It shows a Sasquatch — or perhaps a guy in a gorilla suit — walking through the woods.

Though Alexie considers himself a "Sasquatch agnostic," he points to a long tradition of such a creature in the stories, art and culture of Native Americans. The idea of a giant primate roaming the American backwoods isn't new, but Alexie is fascinated by the Bigfoot legend's ties to Native American myth.

"If nothing else, it's the celebration of that other great American tradition — the hoax, the prank."