Accessibility links
Piecing Together 'The World's Largest Jigsaw Puzzle' As the Berlin Wall was coming down, East Germany's secret police, the Stasi, tore up millions of files. More than two decades later, the vast array of secret papers collected by the Stasi is still in huge demand. Archivists are now using groundbreaking computer technology to reconstruct those files. 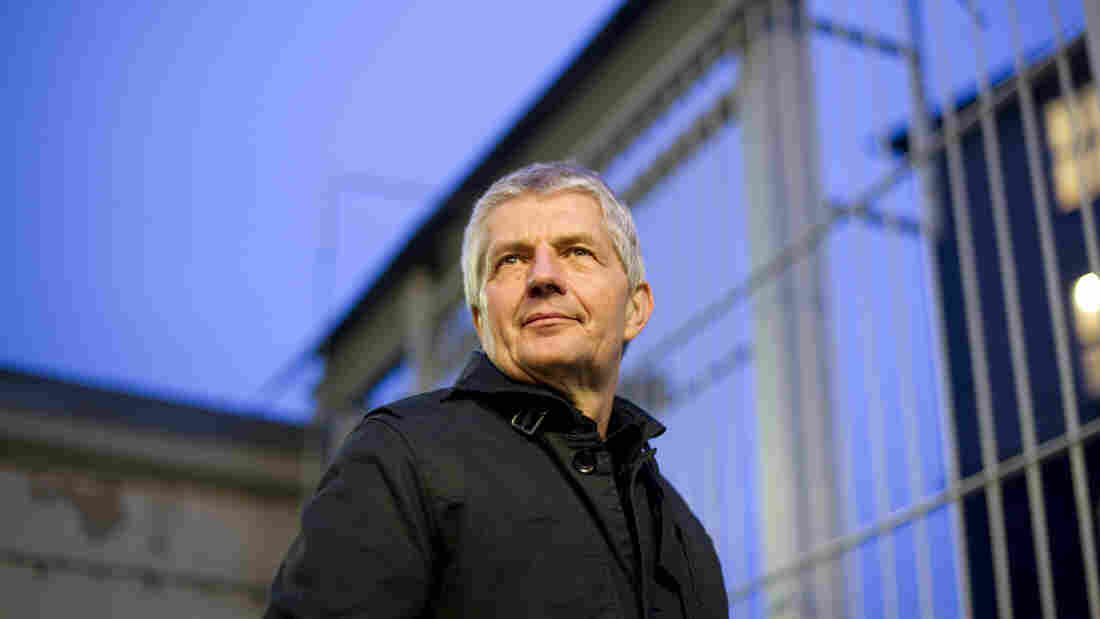 Roland Jahn, a former East German dissident, is now Germany's federal commissioner of the Stasi archives. His agency is painstakingly piecing together the shredded documents of the former East German secret police. Jahn is shown here in March 2011 at a former Stasi prison at Berlin-Hohenschoenhausen. Johannes Eisele/AFP/Getty Images hide caption 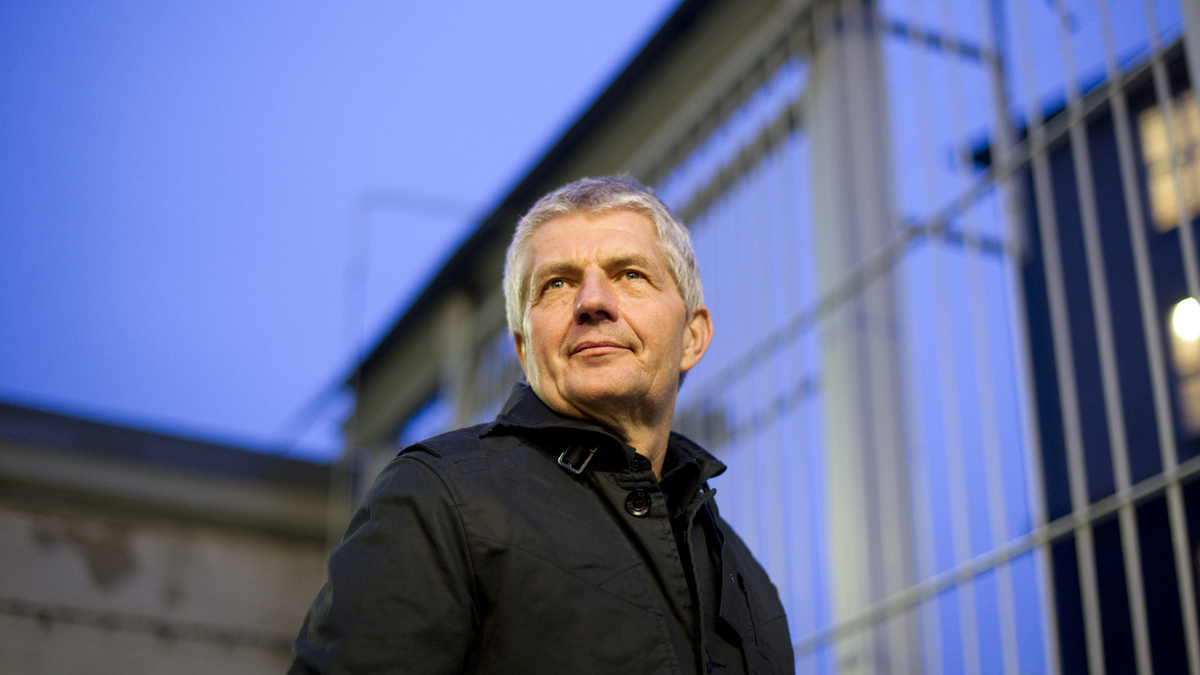 Roland Jahn, a former East German dissident, is now Germany's federal commissioner of the Stasi archives. His agency is painstakingly piecing together the shredded documents of the former East German secret police. Jahn is shown here in March 2011 at a former Stasi prison at Berlin-Hohenschoenhausen.

When the Berlin Wall came down in 1989, East Germany's secret police, the Stasi, frantically tore up millions of files gathered during decades of spying on its own citizens.

More than two decades later, the vast array of secret papers collected by the Stasi is still in huge demand. So far this year, 70,000 people have applied for access to the Stasi archives.

Many are young Germans — some searching for information about relatives, others just eager to know more about their country's past. 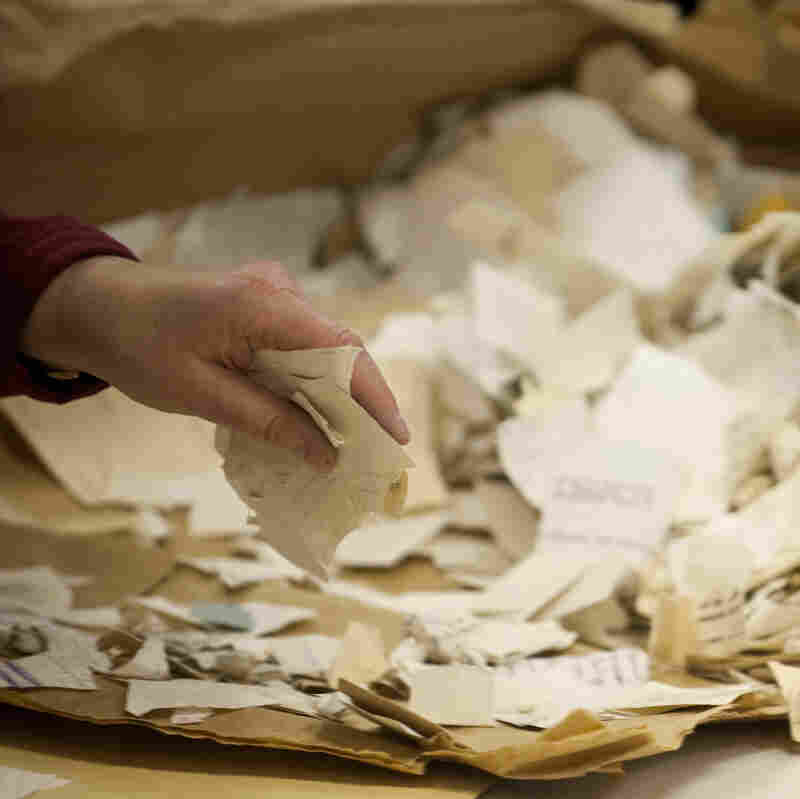 A worker in the former headquarters of the Stasi sorts hundreds of thousands of torn or shredded Stasi documents in January. Workers are sifting through thousands of bags, containing between 50,000 and 80,000 fragments each. John MacDougall/AFP/Getty Images hide caption 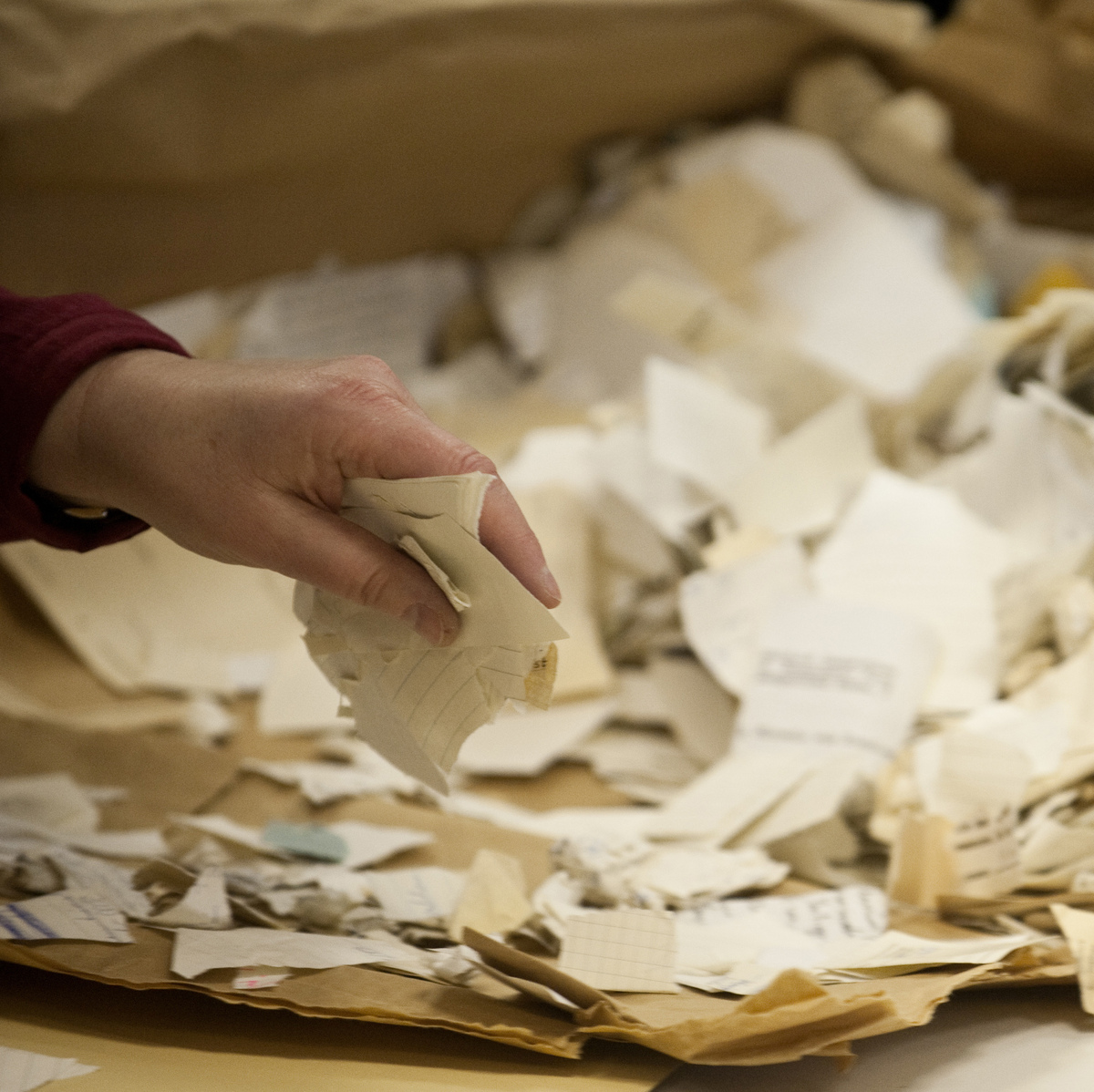 A worker in the former headquarters of the Stasi sorts hundreds of thousands of torn or shredded Stasi documents in January. Workers are sifting through thousands of bags, containing between 50,000 and 80,000 fragments each.

In a room as spotless as a doctor's clinic, Karina Juengert is working at her desk. Beside her, there's a big brown sack filled with small scraps of paper. She picks out one of these scraps, examines it closely and drops it into a tray.

Juengert was barely a toddler when Soviet-controlled East Germany collapsed. At 24, her working life is devoted to piecing together some of the nastier remnants of her nation's past.

She has no doubts about the merits of what she's doing.

"Nobody is going to spend time and energy tearing up documents that have no importance. So the work we are doing is, yes, of absolute importance," Juengert says.

The sack Juengert is dipping into is full of documents ripped up by the Stasi in the dying days of its rule.

She's one of a team employed by the government of the now unified Germany to put these papers back together again for the vast archive they're creating of Stasi files.

"My job consists of really just sorting out the first level, but of course I get an idea sometimes of what some of the files are about, and absolutely it does anger me. But I don't experience as much of that in my task, in my job, as some of the others do," Juengert says.

Jungert works in the giant complex that was the Stasi's headquarters in Berlin. Her room is at the end of several long corridors. Walk those corridors, ride from floor to floor on the old wooden, jump-on, jump-off, paternoster elevator, and you'll have no trouble imagining when this place was full of spies, prying into every corner of the lives of their fellow citizens.

The Stasi existed for only 40 years. Yet its multitude of agents and informers amassed enough secret files to fill more than 60 miles of shelving. When the Berlin Wall was torn down in 1989 and it was obvious East Germany was collapsing, the Stasi began destroying its most incriminating records.

Petter says the shredding machines were under such strain they eventually burned out.

Panic-stricken, the Stasi's agents resorted to ripping up files with their bare hands.

For some three months, with their country in chaos, they worked round the clock, tearing up papers and stuffing them into sacks.

When they finally abandoned their posts and their headquarters were taken over by angry protesters, they left behind 16,000 of those sacks, containing hundreds of millions of pieces of paper.

A Stiletto, A Lamppost And The Soul Of Berlin

Assembling this giant paper jigsaw by hand would take many decades, if not centuries. Some documents — those torn only into a few pieces — can be reconstructed manually.

Back in that spotless office, an archivist is doing exactly that, using tape and tweezers.

The Stasi's panicky agents ripped many of their secret papers into tiny fragments. Piecing those together by hand is extremely difficult.

The E-puzzler is basically a shredding machine in reverse. You scan torn-up documents into it. It matches up the pieces using color, paper texture, fonts, tear lines and other details.

For the past few years, the E-puzzler has been used under a pilot program funded by the German government. But it has processed only a few hundred sacks. There are more than 15,000 to go.

Haeussler now wants to greatly step up the use of E-puzzler technology, though that will require more government money.

"It will help us enormously. We couldn't even employ the amount of people that would be needed to put together the tiny, tiny pieces of files, because some files are only half a fingernail's worth in size," Haeussler says.

Some Germans oppose spending so much money and effort piecing together the Stasi papers.

This is a sensitive issue in Germany. Those files contain many unpleasant secrets, including the names of so-far-undiscovered Stasi informers.

Down in the vaults of the archive, when you look at the vast array of documents, plus covertly recorded videos and audiotapes, it's hard to imagine anyone ever archiving all of this.

Archivist Nils Sebastian says the job will be completed, though, because it has to be done. "Sure, standing here looking at the amount of files you think, 'Does this particular file here really matter, when you think about the bigger picture?' But of course it does, because each file is a person and the secret police really worked against the citizens of East Germany and that's why every single file is important," Sebastian says.

No one understands that better than the man in overall charge of this place.

Roland Jahn, federal commissioner of the Stasi archives, is a former dissident, jailed in the 1980s for supporting Poland's Solidarity movement. After the Berlin Wall fell, Jahn was the first East German to read his own Stasi file. He found out some of his friends had informed on him.

"Of course it did hurt, but it enabled me to forgive concrete people and I think that is exactly what looking at your Stasi file can do, because it enables you to then go and question the perpetrators," Jahn says. "And we must learn from these records, what it was like to live with the secret police and to live under a dictatorship. That is what is important."