Accessibility links
One Debate, Two Very Different Conversations Linguist Geoff Nunberg has been puzzling over President Obama's performance in the presidential debate last week. Looking at who the candidates were addressing their answers to shows that Romney was doing something unusual, he says. 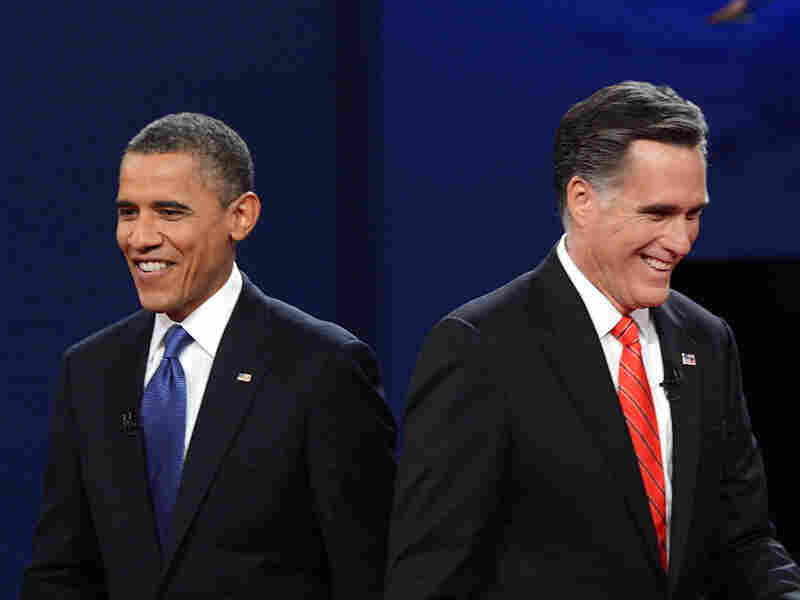 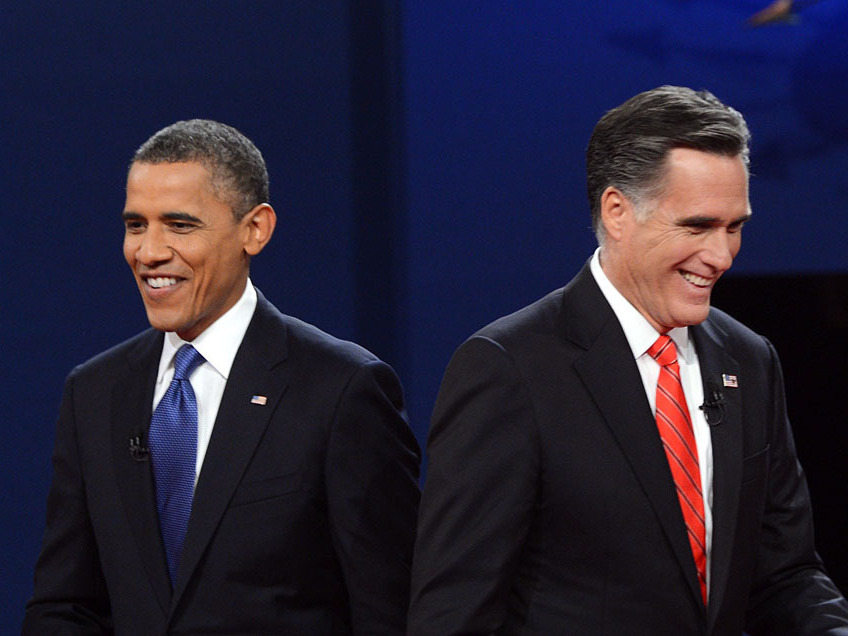 President Obama and Republican presidential candidate Mitt Romney finish their debate at the University of Denver on Oct. 3.

When you consider how carefully staged and planned the debates are and how long they've been around, it's remarkable how often candidates manage to screw them up. Sometimes they're undone by a simple gaffe or an ill-conceived bit of stagecraft, like Gerald Ford's slip-up about Soviet domination of eastern Europe in 1976, or Al Gore's histrionic sighing in 2000. Sometimes it's just a sign of a candidate having a bad day, like Ronald Reagan's woolly ramblings in the first debate with Walter Mondale in 1984.

But President Obama's flop was more puzzling. Sure, there were lots of lost opportunities. Twitter recorded 10.3 million tweets over the 90 minutes of the debate, and my guess is that 500,000 of those offered zingers that Obama could have used. But there was no one moment when the debate went off the rails, which is why even the Saturday Night Live writers said they had trouble turning it into a sketch. You could hear the bewilderment in the multitude of explanations and excuses people offered for Obama's performance. He's worn down by the job. He's not used to being challenged anymore. He didn't expect Romney to be ready to rumble. It was the Denver altitude. He was sandbagging. He didn't want to be seen as an angry black man. It was a Zen thing.

I have no idea what the man was thinking. But one thing that struck me about five minutes in was that he didn't know which TV show he was showing up for. Like the other spectacles of modern public life, the televised debate re-stages a supposedly traditional ritual as a talk show. There's a minimal basic setup, with the candidates and a moderator or a panel. And after the very first Kennedy-Nixon debate, there has to be a studio audience, even if they're told to keep silent. As with any other talk show, we need a surrogate so we can imagine how the candidates' words are landing.

But beyond that, a debate can play out in a lot of ways. There are those WrestleMania smackdowns like some of this year's primary debates, where the audiences were encouraged to jeer and cheer, and the candidates spent a lot of time attacking both the moderators and each other. You think of Gingrich saying to Romney, "Can we drop a little bit of the pious baloney?" or of Romney offering to bet Rick Perry $10,000 about his position on the individual mandate.

Still, those candidate-to-candidate exchanges are pretty unusual in the history of debates between the presidential and vice-presidential nominees. True, they've provided us with some memorable moments, like Lloyd Bentsen's "You're no Jack Kennedy" rejoinder to Dan Quayle in 1988. But that was one of only two things that Bentsen said directly to Quayle over the whole debate. In fact, from the first Kennedy-Nixon debate up through the debates in recent elections, the candidates have rarely addressed each other more than a couple of times in all. The overwhelming number of remarks are addressed to the moderator or panelists, with occasional shout-outs to the audience at home.

The real outlier in this last debate was Romney. He addressed the president directly 37 times, either as Mr. President or just as "you" — almost twice as often as he referred to the president in the third person. That was dramatically different from Obama, who referred to Romney in the third person fifty times and addressed him directly only six. It was as if Romney had shown up armed for a cable news face-off, while the president was prepared for an episode of Meet the Press. That's presumably why Obama spoke to the moderator Jim Lehrer with the slightly hesitant style he uses when he wants to convey thoughtfulness to an interviewer, drawing out words like "and" and "but" and pausing briefly between word groups, as if he were carefully composing each sentence on the spot. Whereas apart from a few strategically placed false starts, Romney didn't really try to dispel the impression that he was offering a prepared pitch.

Now, Obama may very well have been just off his game. But the strategy of avoiding direct confrontation was clearly decided in advance. And it probably wouldn't have turned out so disastrously for Obama if Romney hadn't been hammering on him with all those second-person pronouns that he wasn't responding to. All of a sudden the style that must have seemed deliberative in rehearsal came off as evasive, timid and peckish.

Of course one big reason why Romney could get away with addressing his answers to Obama rather than to Lehrer is that the questions themselves were so vague and open-ended, unlike the tough and specific interrogatories that panelists asked in earlier debates. It put me in mind of a certain kind of celebrity interview: "You, Mitt Romney — government, regulation ... help me with this." The air may have been thick with facts and factoids, but they weren't coming from Lehrer — the only specific figure he mentioned was the one in "your two minutes are up."

Things will be different on Oct. 16, when the candidates are talking directly to audience members in the town-meeting setting. Obama doesn't get professorial when he's one-on-one with members of the public. And in that setting the burden will be on Romney to make personal contact. The aggressive sallies that were effective in the first debate might make him sound like a QVC pitchman when you hear them spoken to an ordinary citizen. But I imagine they'll both do just fine. And anyway, I like to tell myself that none of these things should matter. This is a political debate, not "Battle of the Network Stars." But who am I kidding?